banríon’s second EP, dare to crush' is made up of six brand new tracks - landing on February 1st. Catch the band performing in Workman's, Dublin on March 11th.

Thankfully, Dublin-based indie rockers banríon are returning next month with their second EP release, Dare to Crush - and Hot Press are delighted to premiere the vibrant new single from the project, 'Departure Party'.

The track, which arrives on streaming services tomorrow (January 25th), marks a trailblazing new path for the fast-rising band, who have already supported the likes of Irish indie-rock giant Pillow Queens, plus international acts like Lime Garden and Remember Sports on their jaunts to Irish shores.

With good reason: banríon's charm lies in their self-deprecating vulnerability and lyrical observations of everyday vignettes that somehow manage to be both relatable and wholly unique at the same time. Making deserved digs at Dublin landlords, the four-piece declare: "we've no homes to go to and nothing to lose" on 'Departure Party'.

'Departure Party' was recorded in Meadow Lodge by Rian Trench, mixed by Chris Barry and mastered by Morgan Beausang. The second single from Dare to Crush pairs crunchy chords with a floaty lead guitar line, using the contrast of heavy subject matter with lyrical quips. It's simultaneously personal and open-hearted, pushing the notion of 'if you don't laugh you'll cry' to the next level.

Observing how little space there is, accommodation-wise, for anyone in Dublin - the band are forced to watch their friends move further and further away.

"Saw the place we used to dance, change the locks / I've got a key / I can't even host a party in my house, it's too loud," Róisín Ní Haicéid sings. "It’s feeling kind of cruddy and it’s feeling kind of fine / You don't have to worry if you're out in time / It's never gonna happen if you keep on moving on / Just keep tellin' myself that I'm not the one."

Songwriter Róisín sings a Dublin ballad that attempts to summarise how the city has been making her feel, missing her friends, favourite club and now-deceased beloved dog. She manages to inserts hope into the otherwise hopeless lyrics:

"There’s no point in looking back, so we just look at what’s to come, I think it’s looking pretty good, depending on how I wake up".

The songs on Dare to Crush were written by Róisín Ní Haicéid throughout 2021 and 2022, with the subjects ranging from love to heartbreak, sickness to the housing crisis.

Formed in 2019, banríon take their influences from their favourite indie and alt-rock artists such as Snail Mail, Alex G and Big Thief. They have cut their teeth in the DIY scene across Ireland, you’ll often find them playing shows with friends in the likes of Workman's, the Grand Social, Bello Bar and Whelans. 2022 saw the quartet play Other Voices, Ireland Music Week, We’ve Only Just Begun and Féile Na Gréine.

The outfit is made up of singer-songwriter Róisín Ní Haicéid, a social care worker by day; John Harding on bass, a Carlow musician with a jazz background; Robbie Stickland as lead guitarist, who makes solo music under his own name; and the newest addition on the drums, Cosmo Clarke - dubbed "Killiney’s own jazz sweetheart" by the group (aww).

The group were named "one of the most thrilling new forces in indie-rock" by Hot Press through their successful first EP airport dads in 2020, and we maintain that statement. Recent single 'fooling' only cemented it further, showcasing Róisín's gift with a pen and her band-mates' knack for supporting her words with infectious indie melodies.

To mark the new EP's release, banríon will play a small Irish tour of Galway, Cork, Limerick and Dublin from February 25th until March 11th. Tickets will be announced tomorrow, so keep your eyes peeled and your wallets firmly open (not too open or you'll be robbed, but supportively open for Irish bands). 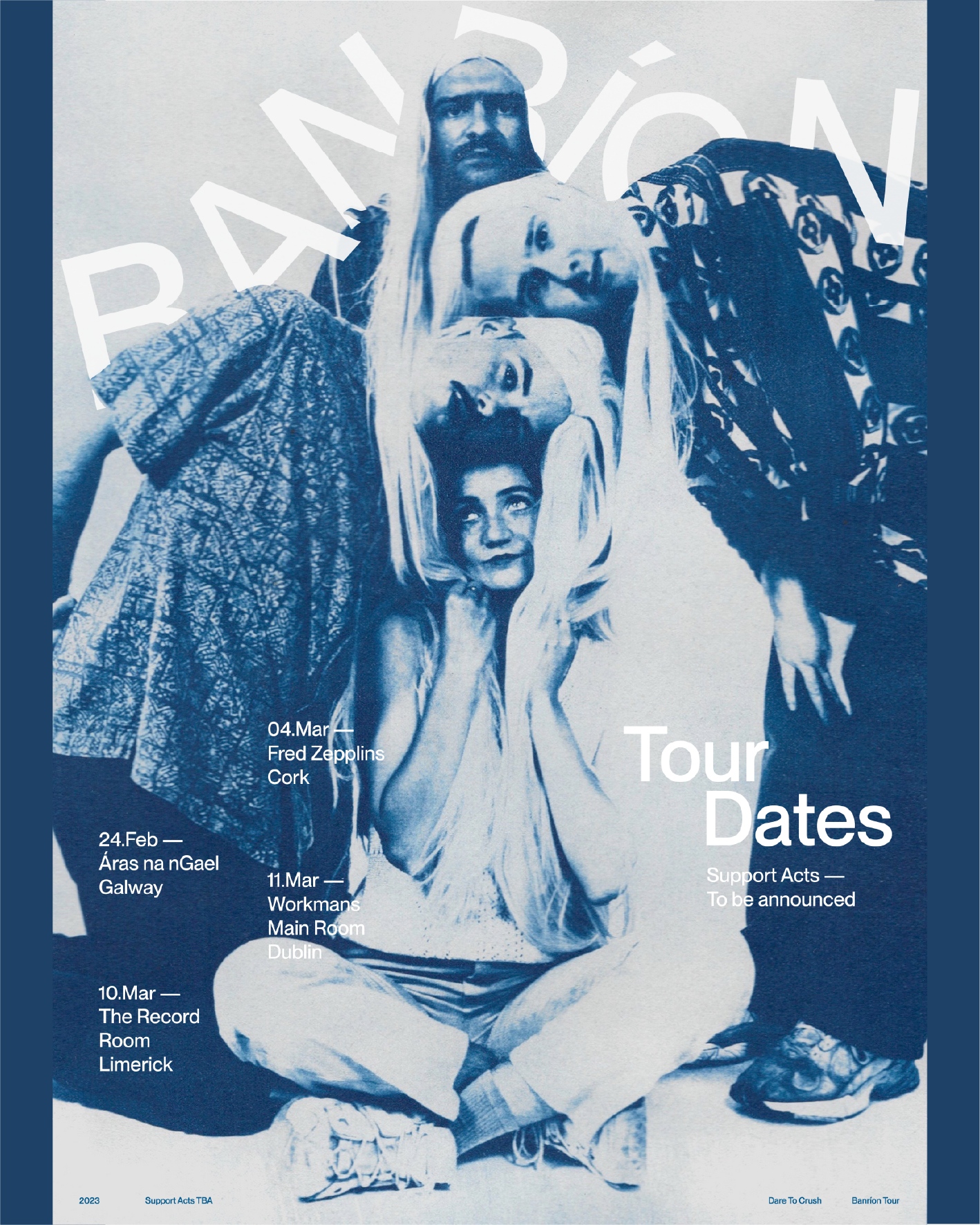