Having previously co-starred in Father Ted, Ardal O’Hanlon and Pauline McLynn are back on our screens as husband and wife in the new Sky Original series Rosie Molloy Gives Up Everything. The pair discuss their TV reunion, their nuanced characters, and the power of addressing “tricky issues” through comedy.

Over 27 years after they first lit up our screens as Father Dougal McQuire and Mrs Doyle in Channel 4’s iconic sitcom Father Ted, actors Ardal O’Hanlon and Pauline McLynn have joined forces once again.

The Irish actors play the loving – but often hopelessly misguided parents – of Sheridan Smith’s titular character in Rosie Molloy Gives Up Everything, a new six-part Sky Original comedy that chronicles a young Manchester woman’s addiction to just about everything, and her subsequent struggles with family, friends and work. The series also marks the reunion of writer and creator Susan Nickson and actress Sheridan Smith, who previously worked together on the acclaimed sitcoms Two Pints Of Lager And A Packet Of Crisps and Grownups.

“I got the call from one of the producers saying, ‘So, Ardal O’Hanlon is going to be playing your husband,’” Pauline recalls. “And I just started to laugh. It was the last name I expected.”

“I think it was probably a brave move on their part, and an interesting decision,” Ardal adds. “I’m sure there was a little bit of mischief involved as well – maybe they thought it would be quite interesting for the public to see us together in that way.” 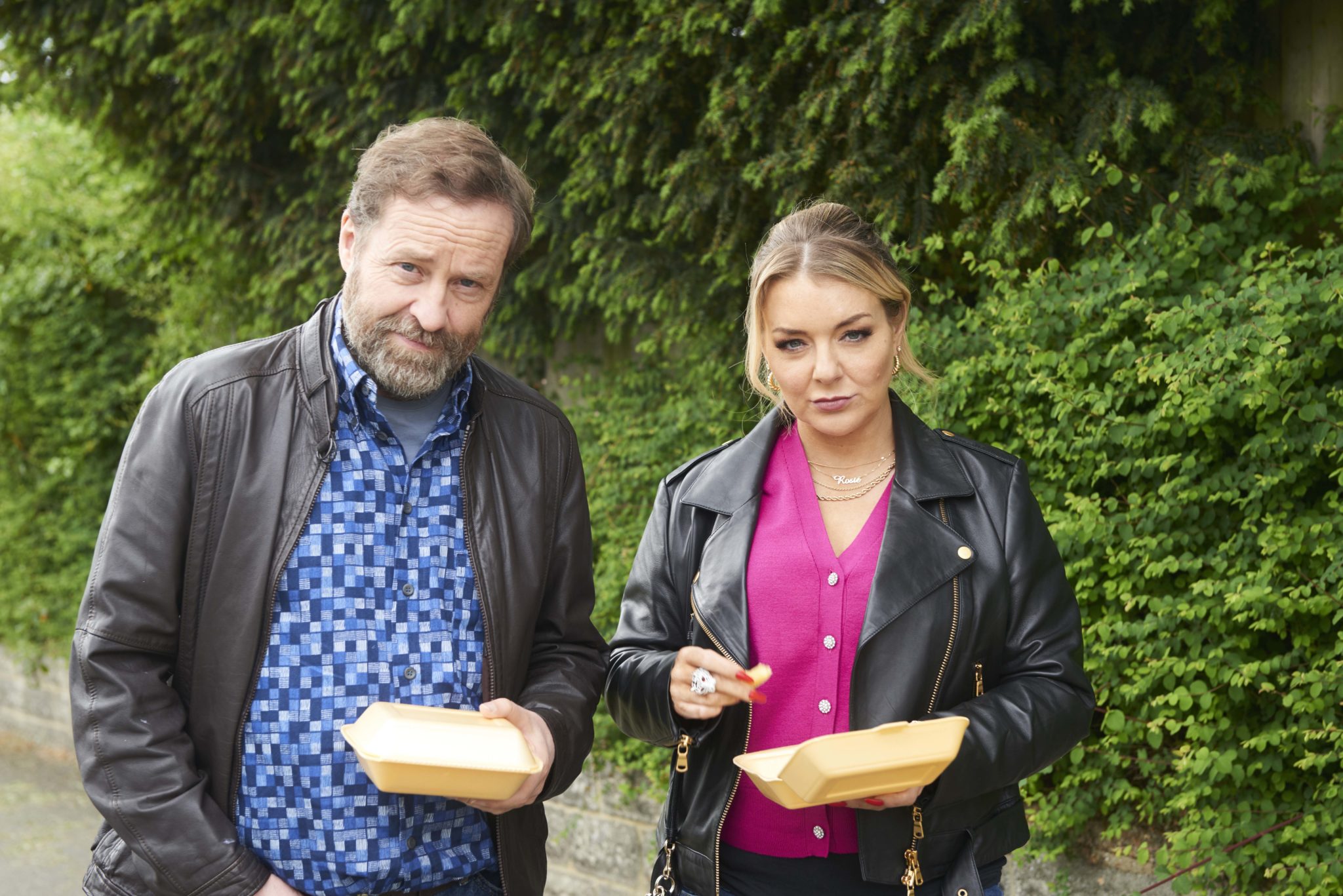 Rosie Molloy Gives Up Everything

While the pair recognise that there will be plenty of excitement over their onscreen reunion, Ardal points out that – despite the series’ phenomenal legacy and countless reruns – their actual work on Father Ted covered only a relatively short period of time.

“I’ve nothing but pride in the show, and nothing but fondness in remembering those times, but it was a very small part of our lives,” he says of Father Ted. “Because it’s on all the time, it might look like it’s all we ever did! But it was three very short stints, really – very memorable in their own way…”

Even so, working together again after almost three decades didn’t prove to be too much of a challenge.

“It was all too easy in one way, because we have this shorthand going back years,” Ardal tells me. “So we were able to pick it up pretty quickly and make for a convincing married couple, I think!”

“Possibly because we’re not married to one another in real life,” Pauline interjects, with a mischievous smile, “so it was easier in some ways. I didn’t have to go home with you every night after shooting!”

“From day one, when we arrived in the room, we started teasing each other and slagging each other,” Ardal resumes. “The old bickering started up very quickly. Sometimes when you go into a new show, and you’re meeting new people for the first time, it might take a while to get to know them, and to get to know what to say, and what not to say. You’ve got to negotiate everything. Particularly nowadays, people are very sensitive on TV sets. But we have this ease with each other.”

As Pauline notes, “some people aren’t going to be able to get over the fact that Father Dougal McGuire has grown up and got married to Mrs Doyle.” But the parts they play in Rosie Molloy – Conall and Win Molloy – are vastly different to their Father Ted characters. In the new show, the husband and wife originally hail from the North of Ireland, but raised their now grown-up family in Manchester.

“What was really lovely and gratifying from our point of view, was that the characters were actually quite well-drawn and well-developed,” Ardal notes. “Each of us, and both of us together, have our own backstory. We’ve had trauma in our family life, and we’ve got our own issues to deal with as well.”

“It’s brilliant to have a series that’s not generic,” nods Pauline. “Sometimes you’re just there to be a broad stroke of a mother. Whereas everyone in this series has lovely nuances, and a great story for themselves to tell, while supporting the magnificent Sheridan Smith – who, honestly, you’d choose to be your daughter no matter what, in real life or as a showbiz daughter!”

Of course, using comedy as a way of discussing serious addiction problems, as well as issues like illness, loss, and family trauma, is quite a gamble.

“You definitely wouldn’t want to be in any way exploiting or trivialising an issue, or even shirking away from the horrors of an issue,” Ardal acknowledges. “But this show is coming from a place of honesty and truth. Susan Nickson knows what she’s writing about. It was a really important show for her, and she was given the licence to write the show she wanted to write. Once you know all that, you feel you’re in very safe hands.

“Each line has humour and pathos, and joy and sorrow, in equal measure,” he adds. “And it’s mainly thanks to Sheridan, and her incredible, towering performance.”

Equally, Ardal reckons that “comedy is a great vehicle for presenting tricky issues.”

“Possibly the best vehicle,” he resumes. “Would this have worked as a drama? I don’t really know. It might have been very depressing, and very grim. This is a show where Rosie is clearly a chaotic character, and leaves carnage in her wake. But she projects this vulnerability, which as an audience you warm to. And this lovability, so no matter what she does, the people around her really care for her, and want what’s best for her. I think people will respond to that.” 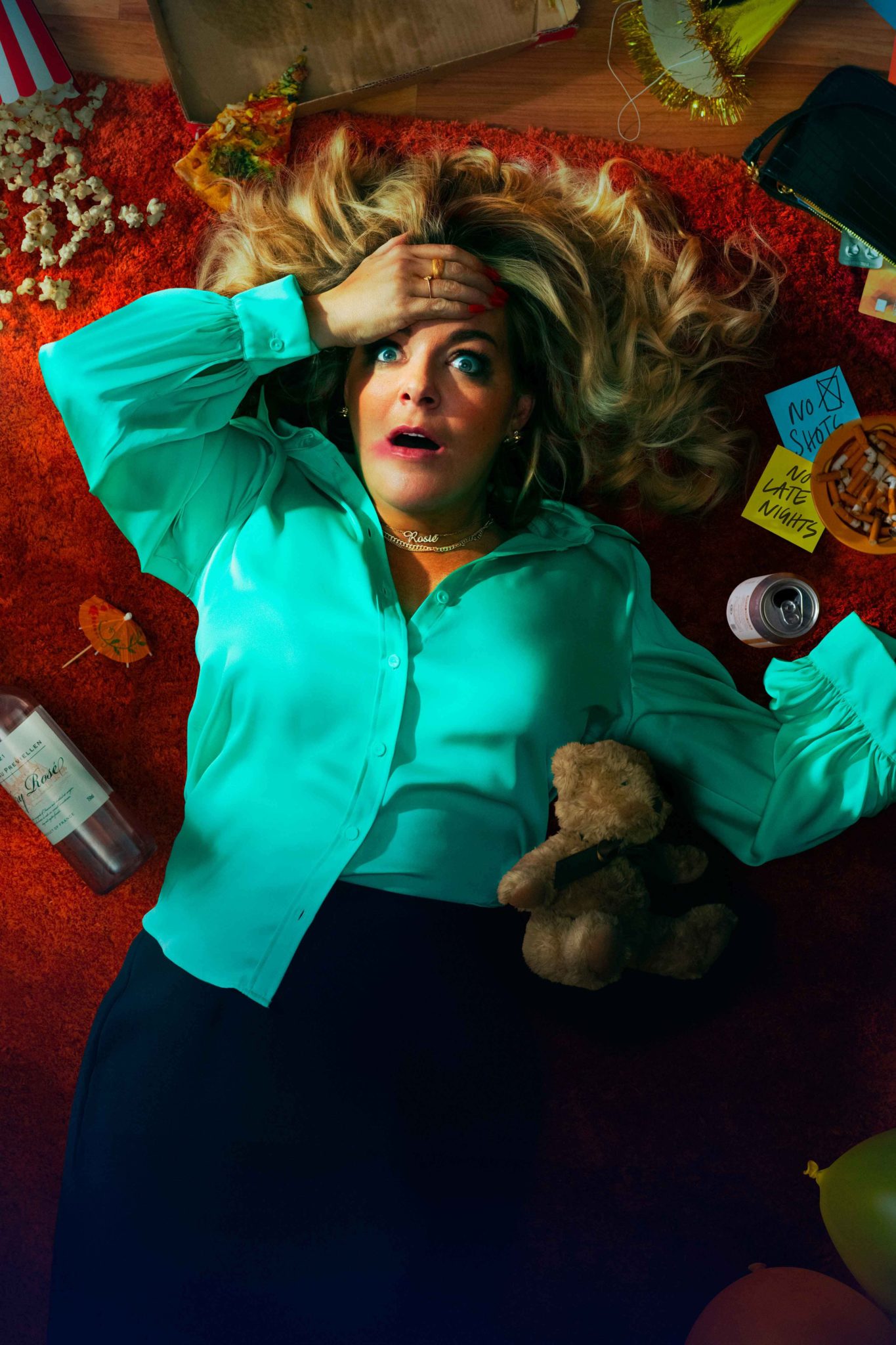 Rosie Molloy Gives Up Everything

Elements of drink culture, and society’s tendency to disassociate from harsh realities, are explored through all of the central characters.

“In terms of my character’s illness, and his own brush with addiction, what I really loved about it is how understated we are as a family in dealing with those issues,” Ardal remarks. “There’s a ring of truth about that – the way you deal with issues in this country. You play them down, and tend to sweep anything unsavoury under the carpet. And drink will often be involved.”

“And any sort of intercession on the part of the families is rarely as bald as, ‘Right, you – into rehab!’” Pauline agrees. “But families are like that aren’t they? Unless something becomes a bona fide crisis, families can gloss over quite a lot of things. They’ll still acknowledge it, but think, ‘Well it hasn’t gotten so bad yet, has it? We’re fine.’”

What’s particularly important to Pauline, is that the show tackles these issues while refraining from being too “preachy.”

“I love that about the whole series,” she resumes. “It’s not in any way didactic about what you must do when you’ve got somebody in extremes like this. It’s quite hopeful in many ways – she tries, and they try. They all make an effort.”

• Rosie Molloy Gives Up Everything is now available on Sky Comedy and NOW.

Hot Press' TV Moment Of The Year: Derry Girls – "I can't remember half of the scene because I was just so distracted by Liam Neeson being sat across the table from me"
10 Best Films Of 2022
My 2021: Jade Jordan - "My first book being published was my best personal moment"

My 2021: Amy Huberman - "My hope for this year is that people can live without fear"
Tech: It's All About Entertainment (Except When It's Not)
Cultural Phenomenon of the Year: Joker Decoded
Interview with Lesley Manville: "Me Too needs to keep shouting as loud as it possibly can!"
Interview: Edward Norton on his new movie Motherless Brooklyn and if Fight Club would still work today
The Whole Hog: Media Moments of 2019