Sofas the length and breadth of Ireland were fallen off when Liam Neeson made a top secret guest appearance this year in Derry Girls. Uncle Colm, AKA Kevin McAleer, guides us through the scene and his own heroic contribution to Martin Scorsese’s new favourite TV show.

While 2022 wasn’t lacking in big days out – I think we were all making up for lost Covid time – none was quite as joyous as being in the Strand Road Omniplex for the hometown premiere of Derry Girls’ third and final series.

First there was the pleasure of getting to interview show creator and real life Erin, Lisa McGee, followed by the twin surprises of being handed the first Smash Hits in sixteen years with the Bogside Fab Four on the cover and then seeing Liam Neeson as the RUC inspector who interviews the girls when they unwittingly get involved in the nocturnal robbing of computers from Our Lady Immaculate College.

Needing an adult to be present because they’re minors, they come up with the genius idea of nominating Uncle Colm who bores Inspector Neeson into releasing them without charge.

But of course you know all this because, like me, you’ve watched it a gazillion times since and never not laughed like a maniacal drain.

Having forgotten to transfer over Liam Neeson’s mobile number when I changed my phone (honest), we’re going to talk to Uncle Colm, AKA Kevin McAleer, about our TV Moment of the Year. When did he find out that the top secret guest star codenamed ‘The Big Fella’ was in fact Ballymena’s finest?

“Officially, I was surprised when the producer sprung it on me the night before, but unofficially there had been a lot of Chinese whispers – or the Derry version of them – going around the set,” Kevin reveals. “TV and film sets are very incestuous – everybody knows everything about everybody else and are only too happy to share it! The producer probably knew that I knew that he knew that I knew, but he still went through the motions.” 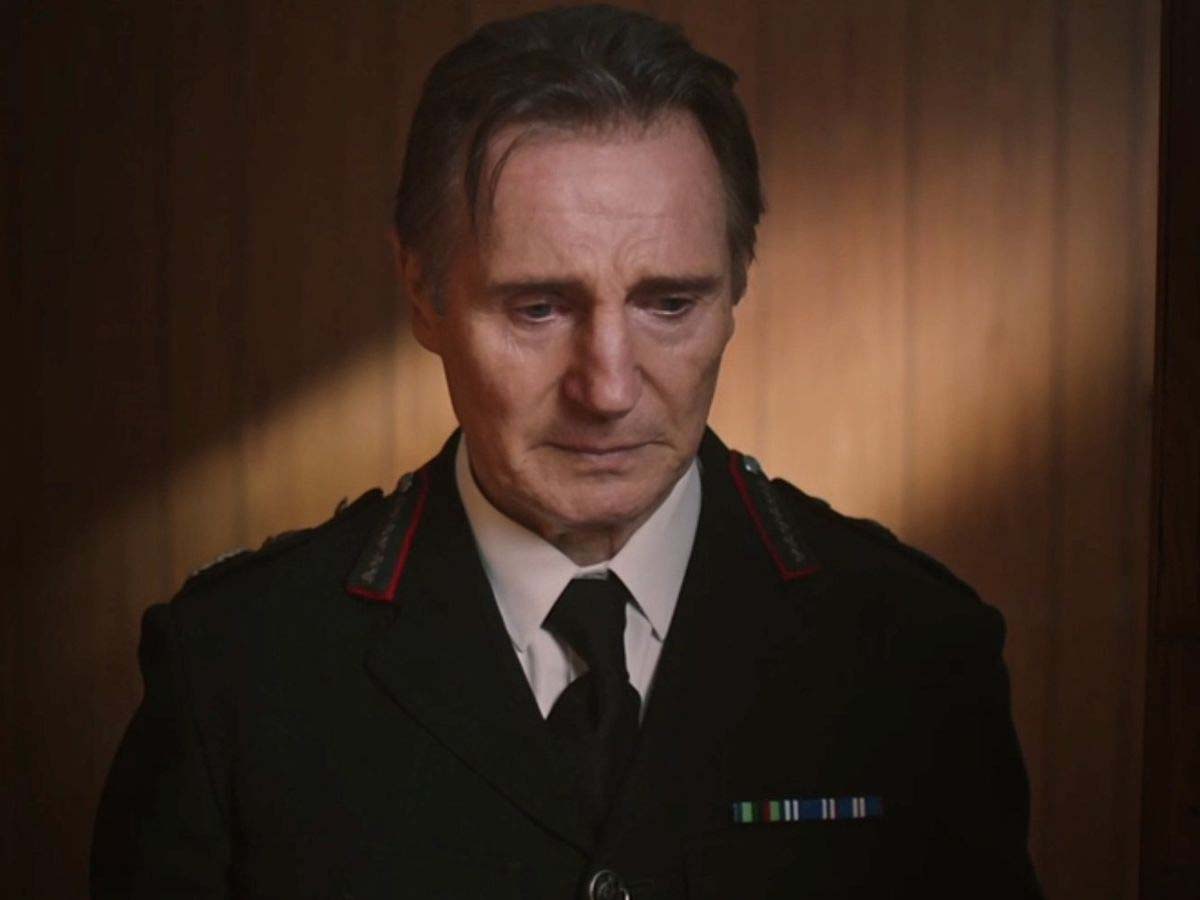 Had Kevin ever been in Liam Neeson’s orbit before?

“No, it was my first time. I can’t remember half of the scene because I was just so distracted by Liam Neeson being sat across the table from me. I’ve only a vague memory of the conversation, which is kind of unfortunate because I don’t know when I’ll be meeting him again. Lisa mentioned something in an interview about Liam being a fan of mine from beforehand but I’m not sure whether he said that to me. I had instant amnesia from being totally starstruck.

“I do remember him saying he’d been told to watch Derry Girls by Helen Mirren, which in itself was pretty remarkable. I probably owe Liam commission for all the tickets to my live shows he’s helped sell!”

Is it his favourite Uncle Colm scene?

“Aye, either that or the first one where I tell the story of my car being robbed and being tied to the radiator and all that. That was the script I was sent when they asked me would I be interested in doing it. When I read it, I thought, ‘Yes, please!’ That was my highpoint until Liam Neeson showed up.”

A little production dickie-bird tells us that the scene would have been nailed a lot quicker if a certain 66-year-old Tyrone comedian-cum-actor hadn’t kept corpsing.

“My job on Derry Girls was to literally keep a straight face but, aye, there was a lot of laughing before we even got to the script,” he admits. “The set up – him sat there with his RUC colleague and us all in a row facing them – was funny on its own. It took all of my minimal acting skills to wipe the stupid grin off my face.”

As well as being extremely chortlesome, the Liam Neeson scene also has Erin asking her interrogator, “How many Catholic officers are there in the RUC?” and him replying, “Well, if you count the Jewish fella from Ballymena, three.”

“The script was, as usual, pure perfection,” Kevin notes. “It’s a sign of Lisa’s skill and surefootedness as a writer that she’s able to address that side of things so successfully. These are her experiences, so she’s writing from a place of real knowledge.

“It’s a fun and effortless way to gain a bit of historical education. I don’t expect the English to know the minutia of Irish history – we all tend to show our ignorance when we go beyond our own patch – but it’s no harm that they or people watching elsewhere in the world have a better understanding of ordinary people’s lives during The Troubles. Lisa found a very powerful and effective way of doing that.”

Uncle Colm is in many ways an extension of McAleer’s own stand-up-persona. Did he help with the writing or chip in with ad-libs?

“I’m not ad-libbing at all: every word is written by Lisa. When you come to learn it, it’s so concise and finely crafted. There’s nothing superfluous in it. The script really jumps along too, which gives the show great energy. You have to watch the episodes again because there are so many jokes in them. From a technical perspective, it’s also one of the best edited sitcoms you’ll ever see. Then there’s the Cranberries and the rest of the soundtrack which has such an emotional impact.” 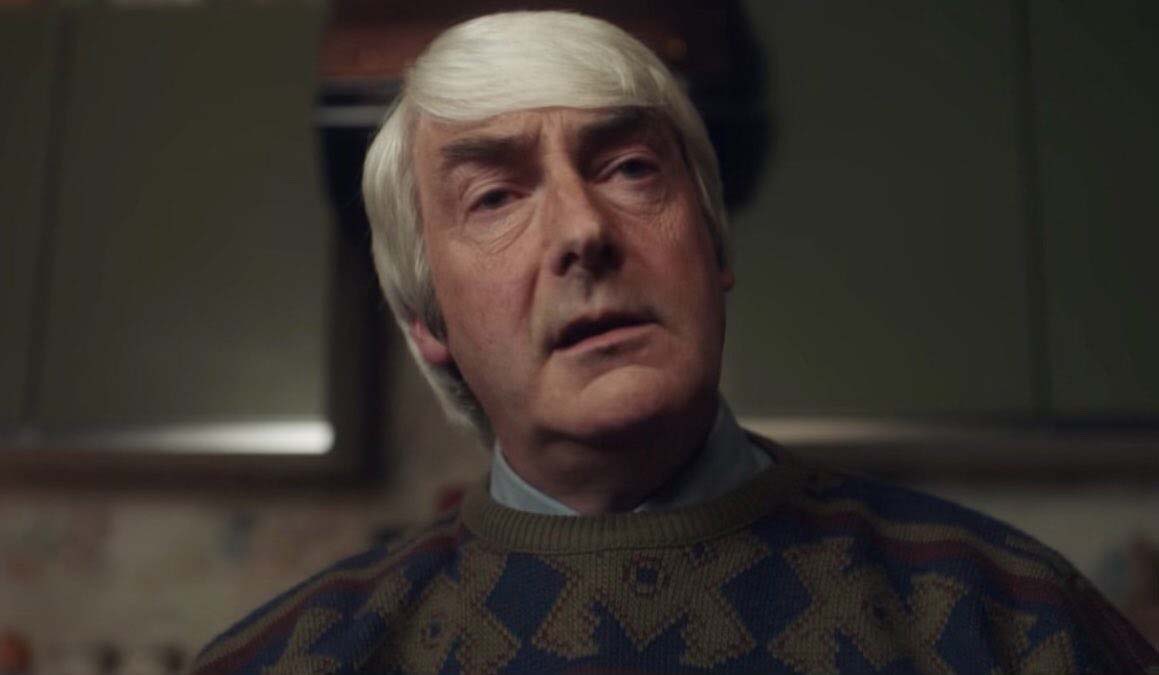 “I’d done TV sketches but it’d be a bit of a stretch to describe that as ‘acting’,” he informs me. “I did perform with my colleague Conor Grimes in a stage show called Spud, which was about the famine. That was very challenging and painful for me – and the audience – so never again. Uncle Colm is pretty close to the character I played on Nighthawks, which your more mature readers might remember. I said to Lisa, ‘I can act if I don’t have to talk to anyone else.’ Uncle Colm was perfect for that because he’s blissfully unaware of other people.”

Asked whether he visited Derry much as a kid, Kevin laughs and says, “No, it was completely beyond my sphere of travel. I was brought up in the countryside with Omagh five miles away considered a distant metropolis. My dad didn’t have a car and the bus service wasn’t up to much. The first time I experienced Derry would have been in my early twenties when I was starting to do shows. There’s lots of history and colour there, as well as social deprivation, which is depressing but also engenders a certain spirit in its people. Whatever the challenge is, they rise above it.”

It must be a bit surreal seeing wee Clare Devlin on the Bogside one day and starring in Bridgerton the next.

“I’ll confess that I’ve never seen Bridgerton mainly because I don’t have a TV,” Kevin responds. “When the kids left home, we put the television in long-term storage and it never came out again. I’ve had a lot of visits subsequently from the TV licence people who don’t believe that story! I do read newspapers and magazines, though, so I’m very aware of the amazing things that Nicola and the others have been getting up to. It’s really important as an actor not to be typecast, and they’ve avoided that.” 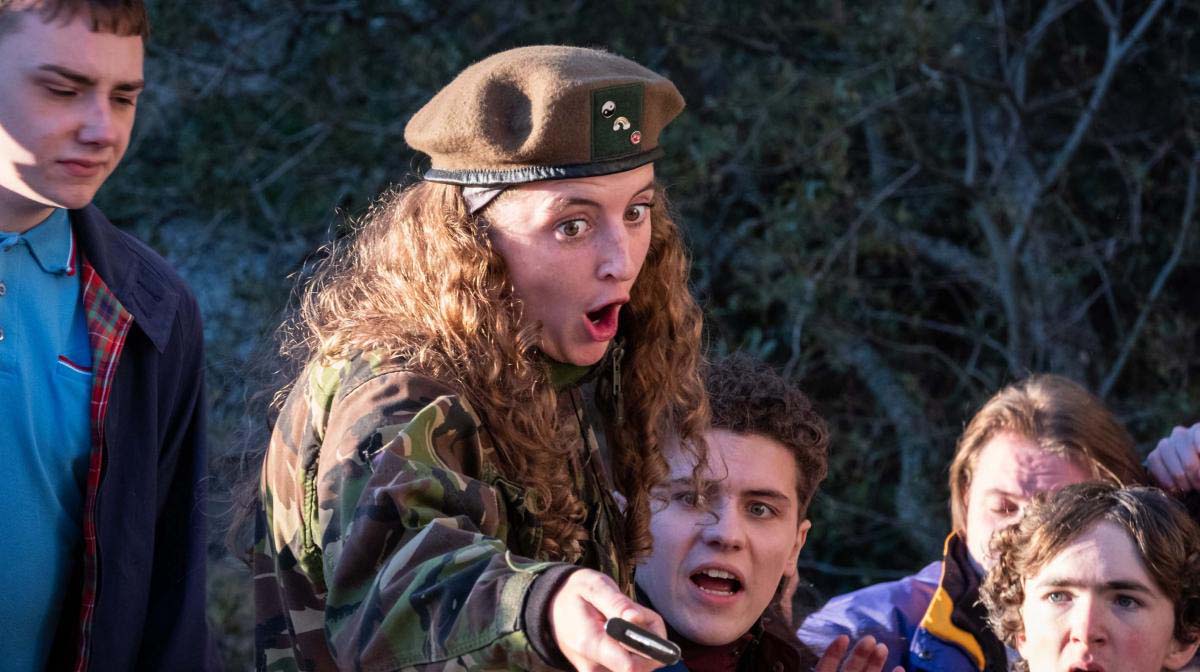 I know it’s like picking a favourite child, but is there a Derry Girls character other than his own that Kevin is particularly fond of?

“Tommy Tiernan is great and, unlike  me, does lots of proper acting as Gerry. You can tell he’s been on stage before in a drama capacity. I’ve been to his shows as a punter and I’m a fan. The relationship between him and Grampa Joe is one of Derry Girls’ many delights.

“I’m also very taken with Orla who occupies her own world within a world. Whatever the scene, she’s always doing something dreamy and eccentric in it.”

The latest cinematic giant to sing Derry Girls’ praises is Martin Scorsese – “Those nuns!” – who seems particularly enamoured of Sister Michael. Were Marty to offer Kevin a starring role alongside Bobby and Al in his next gangster epic, would he take it?

“Are you talking to me?” he says switching into Uncle Colm mode. “I don’t see anybody else because I’ve bored them all into leaving the room. I reckon me and De Niro would sizzle on screen together so, aye, I’m up for it!”

Rosie Molloy Gives Up Everything: "Some people aren’t going to be able to get over the fact that Father Dougal McGuire has grown up and got married to Mrs Doyle..."
10 Best Films Of 2022
My 2021: Jade Jordan - "My first book being published was my best personal moment"

My 2021: Amy Huberman - "My hope for this year is that people can live without fear"
Tech: It's All About Entertainment (Except When It's Not)
Cultural Phenomenon of the Year: Joker Decoded
Interview with Lesley Manville: "Me Too needs to keep shouting as loud as it possibly can!"
Interview: Edward Norton on his new movie Motherless Brooklyn and if Fight Club would still work today
The Whole Hog: Media Moments of 2019