"Given the short period of time available until the event will be staged, the selection process was heavily weighted towards demonstrating past experience in hosting major international events," the statement by the BBC reads.

Belfast has been left disappointed following the announcement of seven shortlisted cities still in the running to host next year's Eurovision Song Contest by the BBC.

Birmingham, Glasgow, Leeds, Liverpool, Manchester, Newcastle and Sheffield are these cities, with Belfast missing out on a chance to host the competition instead of Ukraine. The country's 2022 entry Kalush Orchestra came out victorious at this year's contest in Turin, Italy performing their song 'Stefania'. However, due to the Russian invasion, the European Broadcasting Union (EBU), which organises Eurovision, has decided that the 2023 event cannot be held there.

In a statement announcing the shortlist, the BBC said: "Seven cities have been shortlisted based on their ability to meet a set of minimum requirements that demonstrate they have the capacity, capability and experience to host an event of this scale and complexity.

"Given the short period of time available until the event will be staged, the selection process was heavily weighted towards demonstrating past experience in hosting major international events, as well as being able to demonstrate their credentials in hosting a celebration of contemporary music."

"The Host City selection process is a two-stage process and these seven cities will now go through to the second and final stage, where they will be asked to develop their bids in more detail. The selection of the Host City for the Eurovision Song Contest 2023 will be decided by the BBC in conjunction with the EBU, and the successful city will be announced in the Autumn," they added.

Ireland failed to make it through to this year's Eurovision grand final when Brooke Scullion's pop break-up track 'That's Rich' did not make the cut. The UK was more fortunate with Sam Ryder, who rose to prominence through his TikTok music covers during the first COVID-19 lockdown in March 2020, securing second place. 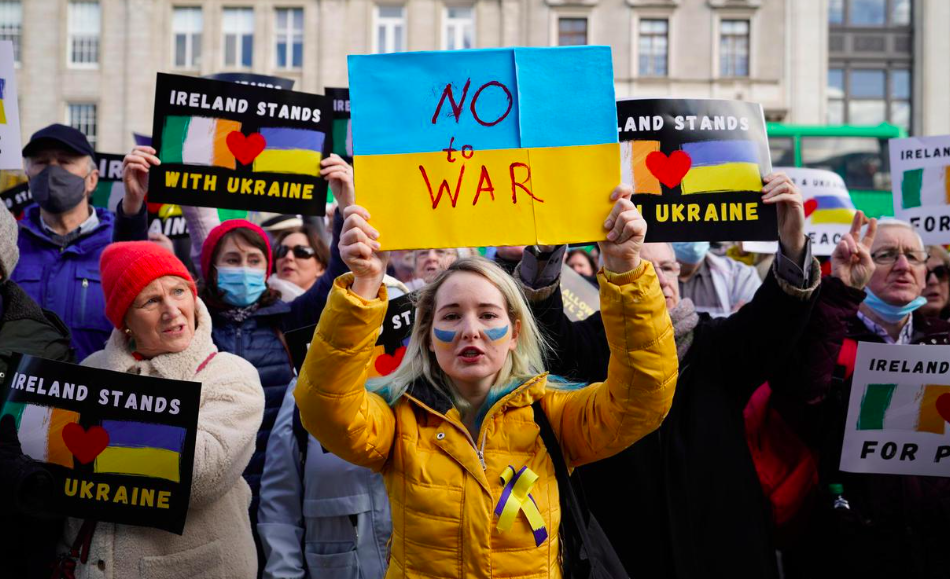 People on O'Connell Street in Dublin protest against the Russian war in Ukraine. Picture: Independent.

According to the BBC, 20 cities expressed an interest in hosting the Song Contest in May 2023. The seven shortlisted locations will be explored over the coming weeks with potential host cities being encouraged to showcase the best of what they have to offer. The final decision will be made in the fall and tickets will go on sale shortly thereafter.

All applicants outlined how they would reflect Ukrainian culture, music and communities to emphasise that Ukraine are the winners of this year’s competition. Ukraine will also automatically qualify for next year's grand final alongside the so-called big five nations - the UK, France, Germany, Italy and Spain, which receive a free pass due to their financial contributions.

Eurovision 2023 will mark the ninth time the song contest has taken place in the UK - more often than in any other country. It is followed by Ireland, which has hosted the Eurovision Song Contest seven times and last in Dublin's Point Theatre in 1997.

U2 will launch Vegas residency at brand new arena in 2023
Róisín O: "Going into the music industry at a young age, I was naive - I look back at me in 2012, and I was just a kid"
Birdy will perform at the 3Olympia Theatre next April
My 2021: Róisín O - "I'm hoping my album release and Irish tour goes ahead without setbacks in 2022"
Focus Ireland issue statement on record-breaking figures: "It is crucial to remind ourselves that homelessness is solvable"
Live Review: Des Bishop brings laughter and tears to the 3Olympia Theatre