The hypnotic Lorde cast a spell over Forbidden Fruit audiences on Sunday, even working her magic to get the rain to finally stop. Elsewhere, Hot Chip, NewDad, Peggy Gou, Avalanches, Tom Misch and KhakiKid wow their respective crowds, bringing an eclectic mix despite the rotten weather.

It’s days like Sunday at the Forbidden Fruit Festival that really test the mettle of music fans. Where Saturday was warm, sunny and smiling — people lounging on the green slopes of grass, musicians wandering from stage to stage, fans queueing around corners waiting to get in — Sunday was its anthesis. Grey, cold and spitting rain, it wasn’t necessarily the conditions one pictured for a festival weekend.

That didn’t stop anyone, though.  Hundreds of people huddled beneath tents donned rain ponchos or simply braved the elements, eager and excited to see their favourite musicians — despite the impending flu. Who wouldn't battle the sniffles to witness Lorde's first Irish show ever? 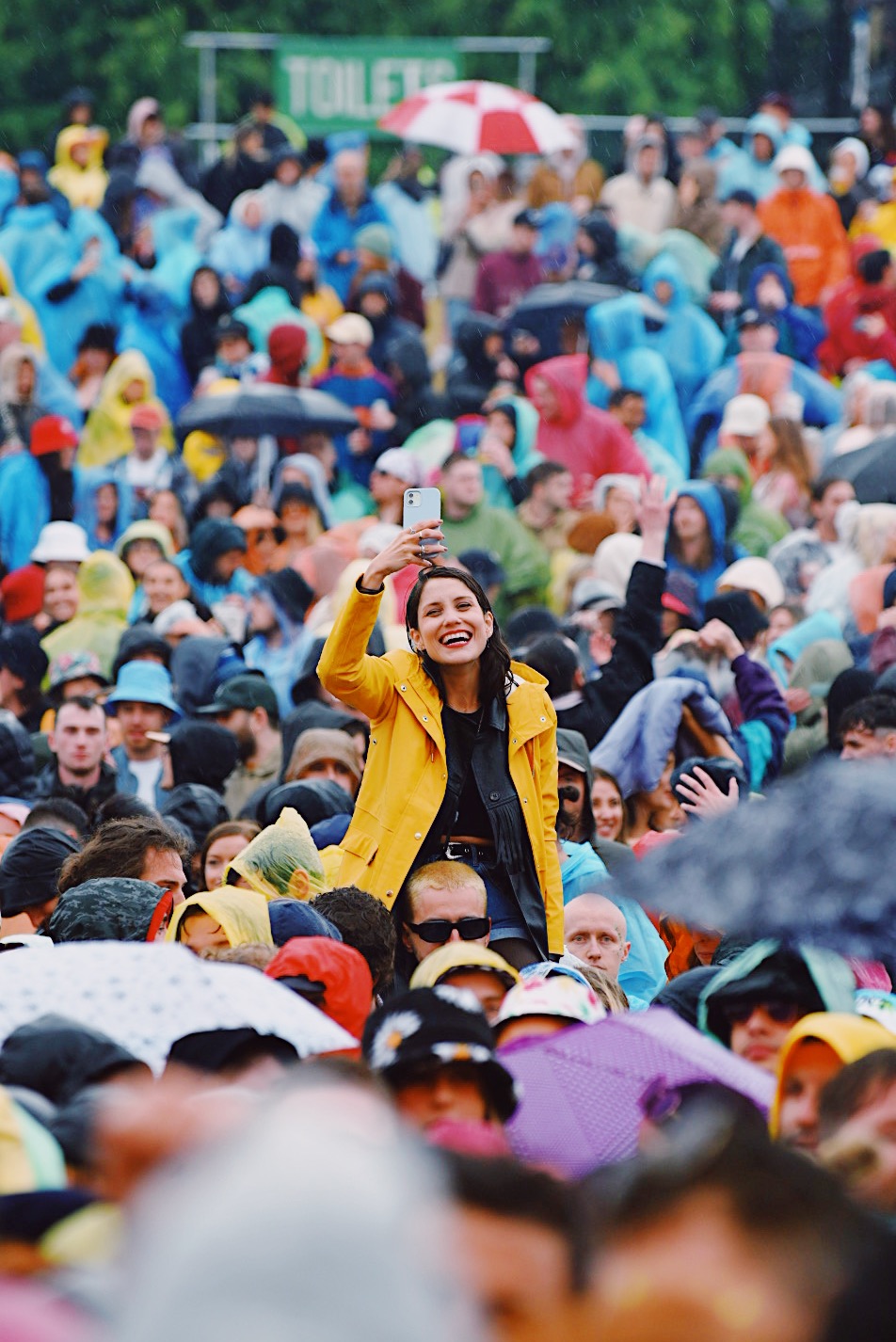 At the Someplace Else Stage, a small platform across from the festival entrance, groups of concertgoers huddled beneath the white tent. At first it was unclear if they were waiting for Dublin rapper KhakiKid or just trying to stay dry, but as soon as he took the stage it was obvious. Fans packed into the space beneath the canopy to watch the Crumlin alternative rapper in action.

There’s a longstanding tradition at KhakiKid gigs to invite as much chaos as possible. Whether it’s climbing into the audience, trading a can of Rock Shore for an Air Bar or starting a mosh pit to a semi-coherent rendition of Kelly Clarkson’s ‘Since U Been Gone,’ the musician’s commitment to creating a confusing, yet infectiously fun atmosphere is impressive. Though it was only 3:15pm, a Sunday and one of the worst days of weather in recent memory, KhakiKid’s energy never waned. 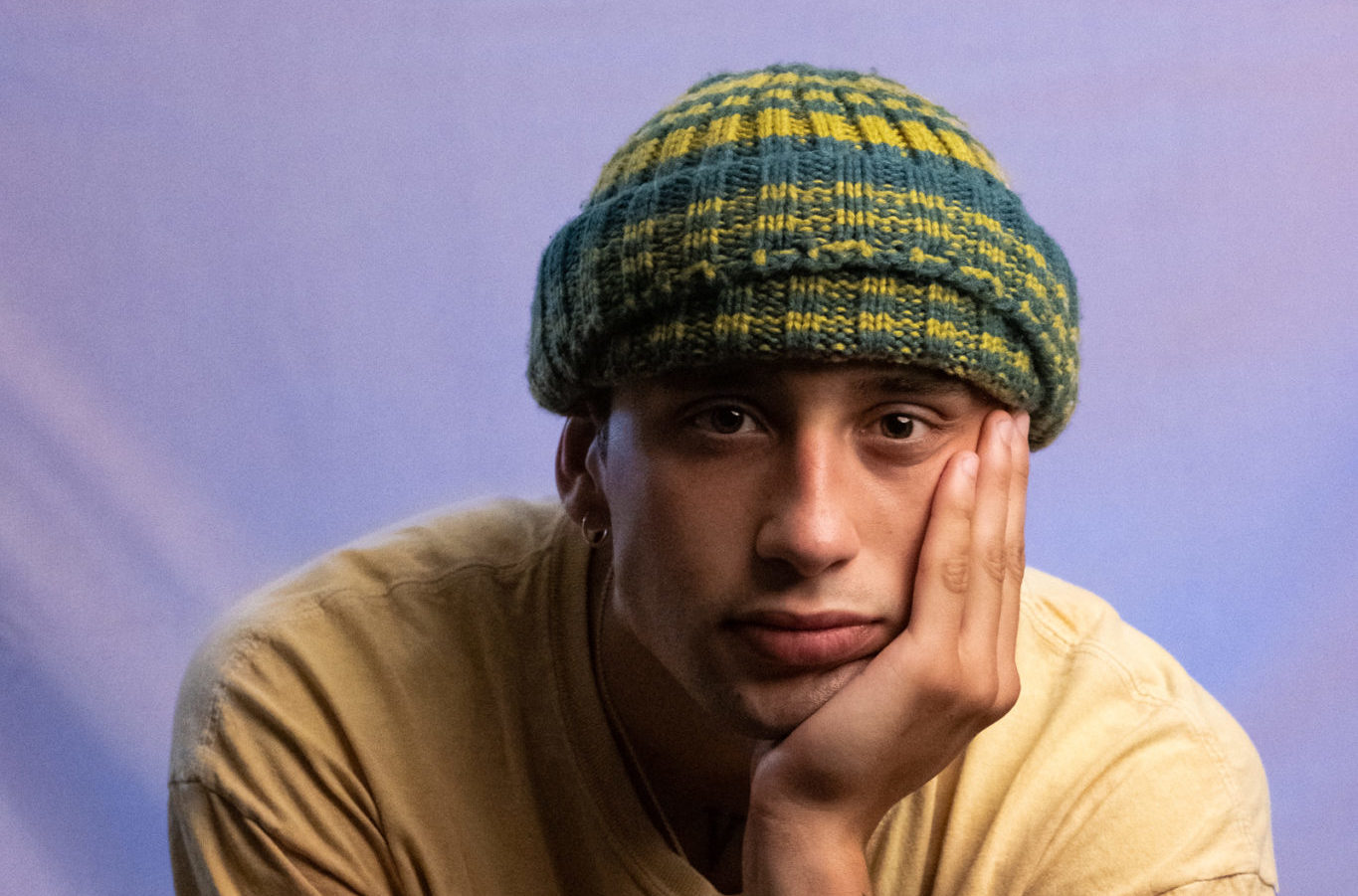 Despite approaching the set with his characteristic, never-take-anything-too-seriously attitude, moments of authenticity bled through. “This is my first ever festival,” he revealed between songs, taking the briefest ever pause before launching into his next track. Performing his latest single, ‘Woodstock,’ as well as fan-favourites like ‘Cozy’ and ‘Shlumped Up,’ the artist took full advantage of his short set time, priming the crowds for a fantastic day of music. His hotly-anticipated Elevator Music EP lands this July, after his forthcoming Longitude set.

Where most of the stages at least offered minimal protection from the elements, in the form of vaulted, circus-esque tents, the Main Stage was completely exposed — a sloping hill of grass (or rather, mud) providing the standing room. So, when Aby Coulibaly emerged, the crowd of fans that greeted her were clearly diehard — colourful rain ponchos dotting the hillside like sprinkles. 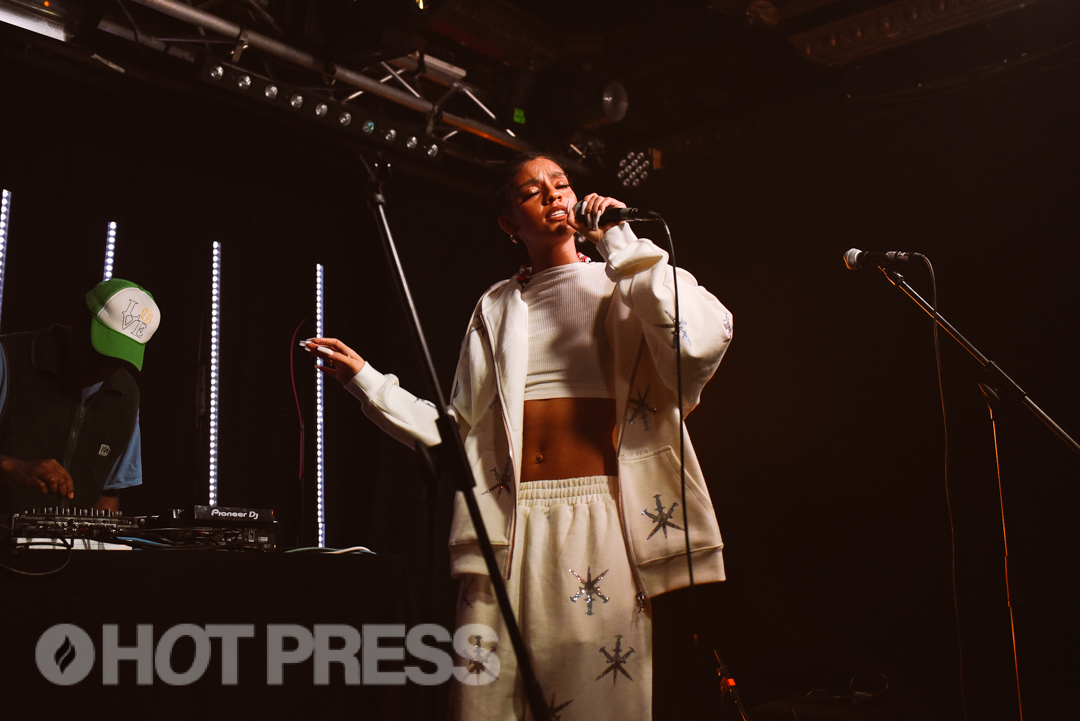 “Thank you so much for coming out, I know the weather isn’t great,” she laughed into the mic, before kicking off her set with ‘Maybe,’ singing the incredibly apt lyric: “I know I’ll see better days when the sun comes out, and the rain goes away.” For those in attendance, though, it was hard to imagine better days — as they danced and sang along, faces upturned towards the rain-drenched sky.

Performing most of her released discography, including ‘Taurus,’ ‘Long Nights’ and ‘Where u at,’ Coulibaly brought her mix of laidback, vibe-heavy performance and high-powered energy, electrifying the Main Stage.

Despite the conditions, the first half of Sunday was still packed with fantastic music and devoted fans — who took the opportunity of the weather to incorporate raincoats, umbrellas and bucket hats into their festival fashion. If there’s one thing that’s true about Irish audiences, it’s that a little rain never stopped them from having fun.

If there's anywhere mud slides can really take shape, it's IMMA. Breaking through the crowds to catch Biig Piig and Chet Faker perform, gigantic lake puddles divided the Main Stage area in half like the parting of the Red Sea. No matter, it simply built our characters. RIP to the many white trainers seen covered in mud (€130 Nike Air Force 1's, no less).

Racing between Ms Piig and Mr Faker, both artists delivered anthems for the eager crowd. Biig Piig in particular was impressive, given that she was exposed in the torrential rain while 33-year-old Melbourne singer-songwriter Chet Faker had the comfort of a tent above his head. The audience went particularly wild for his Flume psychedelic soul-dance hit 'Drop the Game'. The hypnotic beat had the crowd in a trance, repeating the melody back with feverous enthusiasm. The musician seemed nonchalant, offering raw vocals with ease. Tracks from his latest EP It's Not You were on the setlist, as well as past hits like 'Whatever Tomorrow' and 'Gold'. 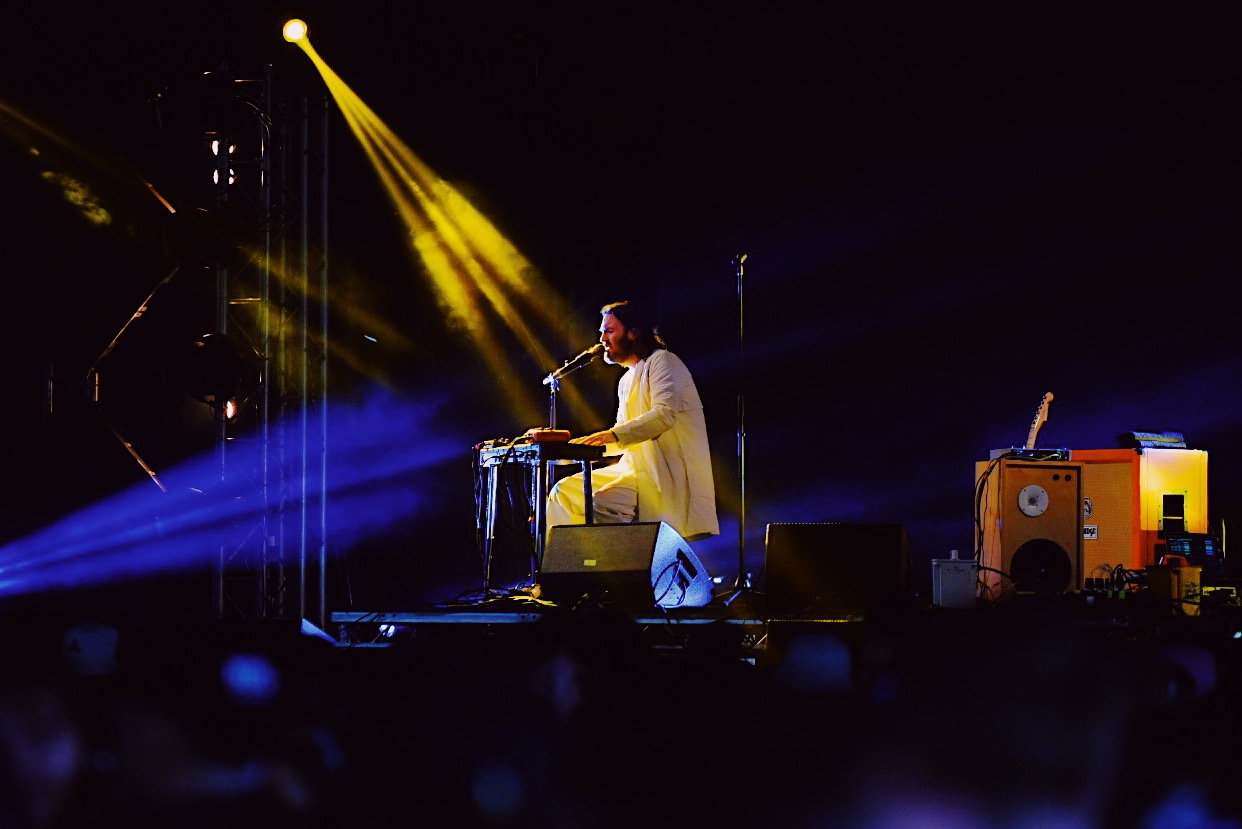 Sprinting to Biig Piig, the Ireland-raised, London-based producer and singer-songwriter was making use of the entire stage for her performance. Dressed in tracksuit bottoms and a fishnet top, Jessica Smyth was more than comfortable dancing around the area while she belted out hits like 'Switch' and 'American Beauty'. The latter is a cut from her 2021 EP The Sky Is Bleeding.

Captivating synths and production is always expected from the unique act, who performs in both English and Spanish. With her dazzling array of introspective, velvet-crushed ballads; cassette-tape hip-hop and slow jams, Biig Piig's hazy music for the last gasps of a house party make for excellent listening. Forbidden Fruit fans were patiently waiting for her 2020 indie-pop classic 'Feels Right', the cherry on top of a brilliant set. We can see why Glass Animals picked her as a support act on their recent US and European tours. With her silky, smoky vocals and an addictive chorus, the track has the crowd dancing through the rainfall. 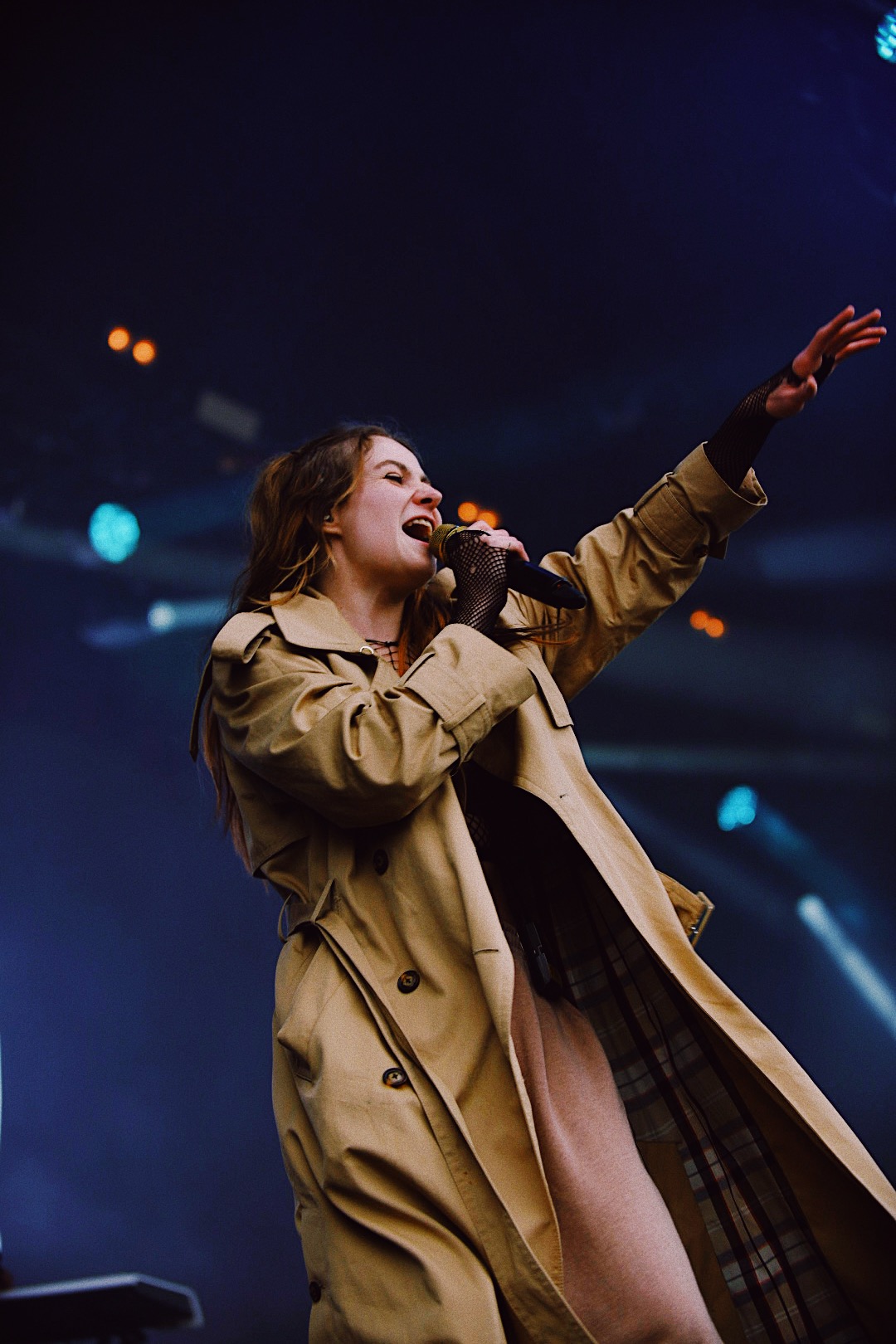 The 26-year-old English musician and producer treated Main Stage crowds to a string of previous hits and newcomer tracks. He dropped his Supershy collaboration 'Happy Music / Something on My Mind' earlier this year, following 2021's Quarantine Sessions and 2020's superb album What Kinda Music with drummer Yussef Dayes. Performing some fan favourites from his classic 2018 LP Geography ('It Runs Through Me' is a runaway gem), the audience are lapping up each and every guitar riff. Thereafter, the stage is nicely warmed for Lorde's rays of light to emerge.

Forbidden Fruit attendees sprint to grab a final pint or plant-based burger before Ella Yelich-O’Connor gracefully enters the stage, bang on time at 8pm. At 60 minutes, it's not the longest set a headliner can bring, especially given the fact it's her Emerald Isle debut. However, her setlist was undeniably all killer, no filler. Dressed for the New Zealand sunshine in a yellow bralette and matching silk trousers, the Jack Antonoff muse is defiantly sunny, despite the tragic weather.

Delivering a range of 2013's Pure Heroine, 2017's Melodrama and 2021's Solar Power numbers, the musician didn't just stick to cuts from her first album in four years. Kicking off with 'The Path', glistening drama anthems like 'Homemade Dynamite', 'Royals', 'Dominoes', 'California', 'The Louvre' and 'Perfect Places' were in the mix alongside the warm 'Mood Ring' and harmony-based 'Secrets from a Girl (Who's Seen it All)'. Melodrama indie-pop banger 'Supercut' was another standout moment, the audience shaking off the cold in tandem with the rousing chorus. 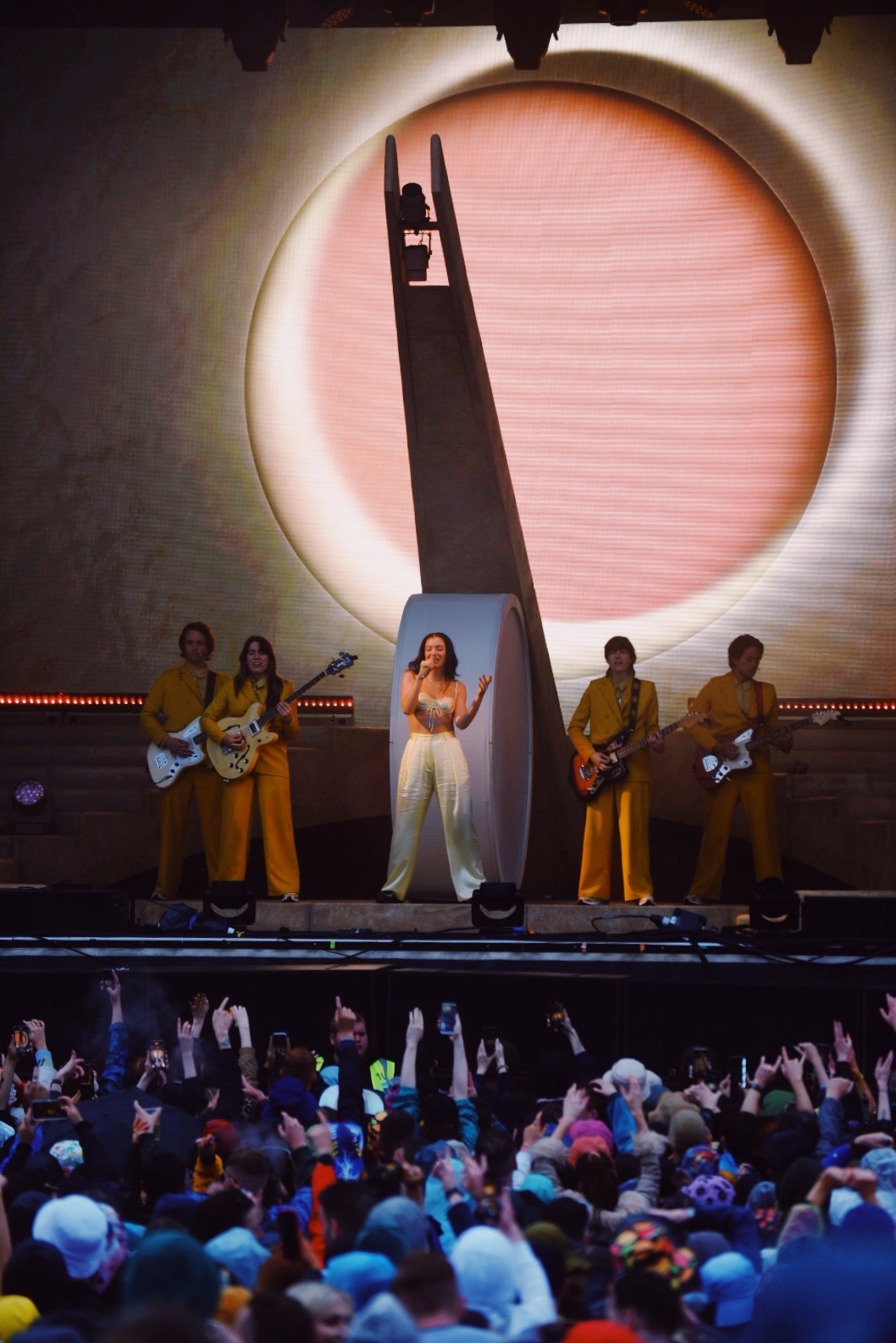 Predictably, the audience knew every word to each track, which impressed Lorde herself. "Dublin, I can't believe there's so many of you here! This is very special for me," she declared, beaming at fans in the front row making heart signs with their hands. Soaked but singing nevertheless, the introspective poet's vocals were pitch-perfect and controlled at all times, while Lorde pranced elegantly around the stage in time with her choreography. Her set is presumably the same design as her headline tour, with a wooden set of stairs above a white circle continuously rotating throughout the show. Her backing vocalists and instrumentalists are in matching mustard suits, with yellow as the colour of the day to match her album theme. Visually striking, the rain even begins to ease at the sight of it.

Oldies but wonderful goldies, 'Royals' (which originally appeared on The Love Cut EP), 'Tennis Court' and 'Team' go down a treat, drenched fans screeching the lyrics back to her like churchgoers. Everyone waits with bated breath for the tour favourite: 'Green Light'. "But honey I'll be seein' you down every road/I'm waiting for it, that green light, I want it," fans scream before leaping in the air in time with Lorde, euphoric energy emanating. 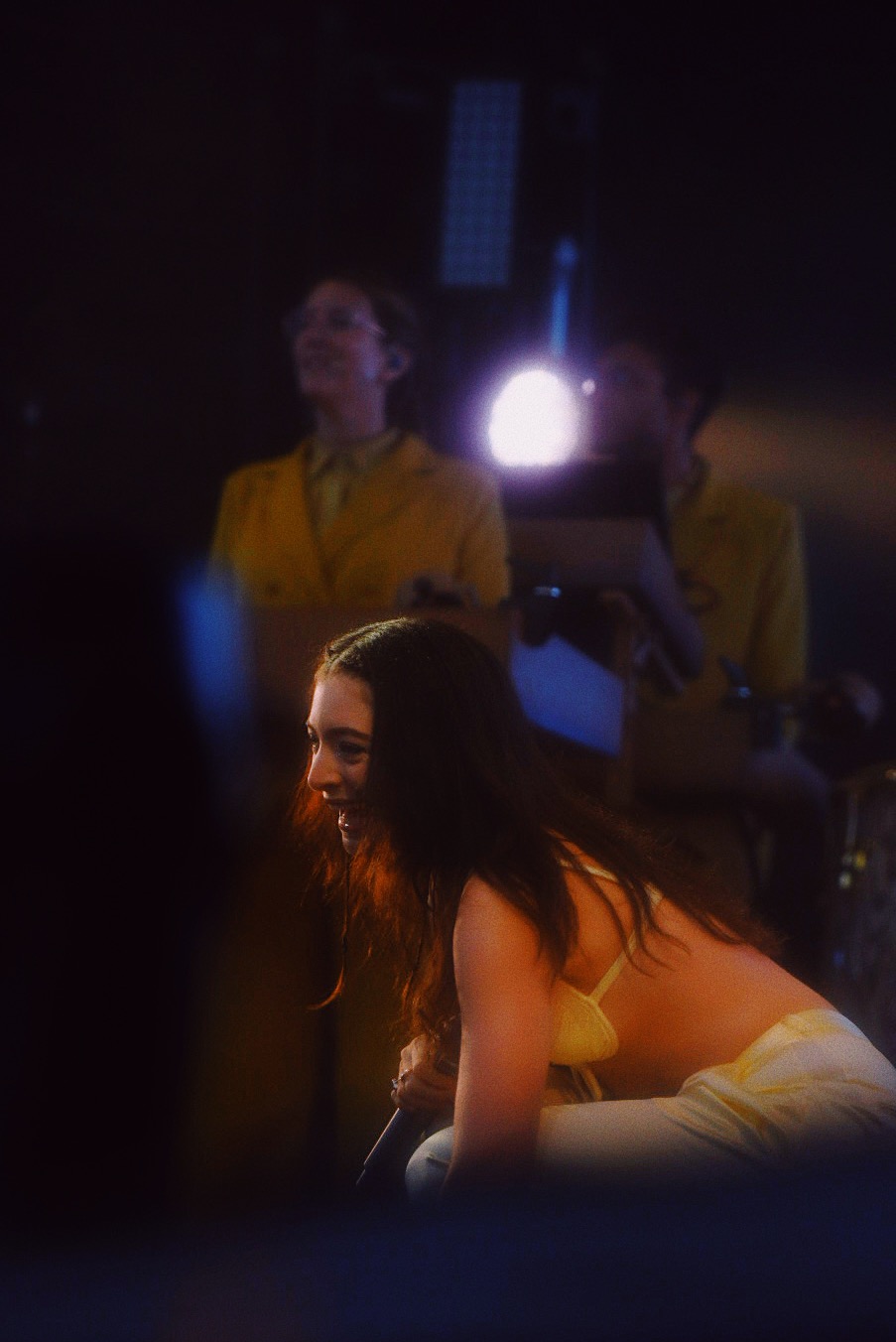 It didn't disappoint, with the Auckland native announcing she'd have to tell her dad about the Dublin crowd. "I wish I was playing another show here!" she laughs, shaking her head. Was she being sincere? Who knows, but the 26-year-old appeared genuinely touched by the Irish crowd's love for her. Exiting stage left, she waved to delighted fans one last time from the top of the hill before jetting off.

I luckily caught half of NewDad's well-received performance, featuring songs from their riveting Pixies-esque EP Waves, like 'Slowly' and 'I Don't Recognise You'. A Charli XCX cover brightened things up, gaining plenty of cheers from their followers at the 2FM Rising stage.

Peggy Gou also kickstarted a packed out set, with her tent full to the brim with passionate techno, house and electronic fans. The 30-year-old South Korean DJ and record producer is currently based in Germany, having released seven EPs on Ninja Tune and Phonica. In 2019, she launched her own independent record label, Gudu Records, and released a DJ-Kicks compilation, DJ-Kicks: Peggy Gou, on!k7 Records. Her giddy crowd roared at every beat drop, making the DJ smile. 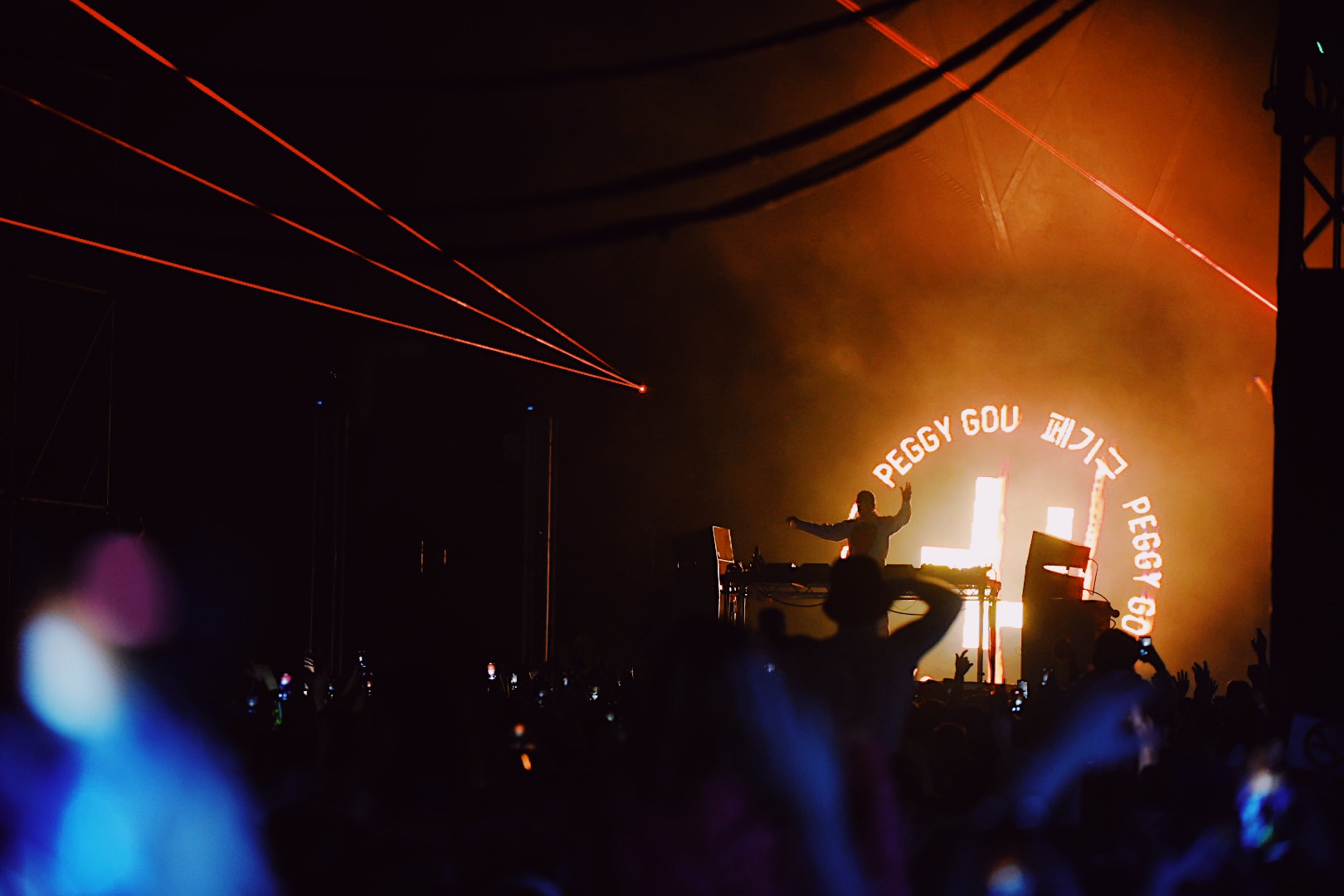 2019 hit 'Starry Night' and 2022's 'I Go' become instant crowd gems, the audience swelling in time to the twinkling synths. Turns out, Peggy Gou and Dublin are a match made in heaven.

After 9:30pm, synthpop legends Hot Chip closed out the return of Irish music festivals with a dance-mania bang. The seven-piece band wowed audiences with funky outfits, hypnotic lights and infectious hits galore. 'Over and Over' from 2006 album The Warning got one of the loudest receptions, as did their excellent Beastie Boys rock-tinged cover of 'Sabotage'. 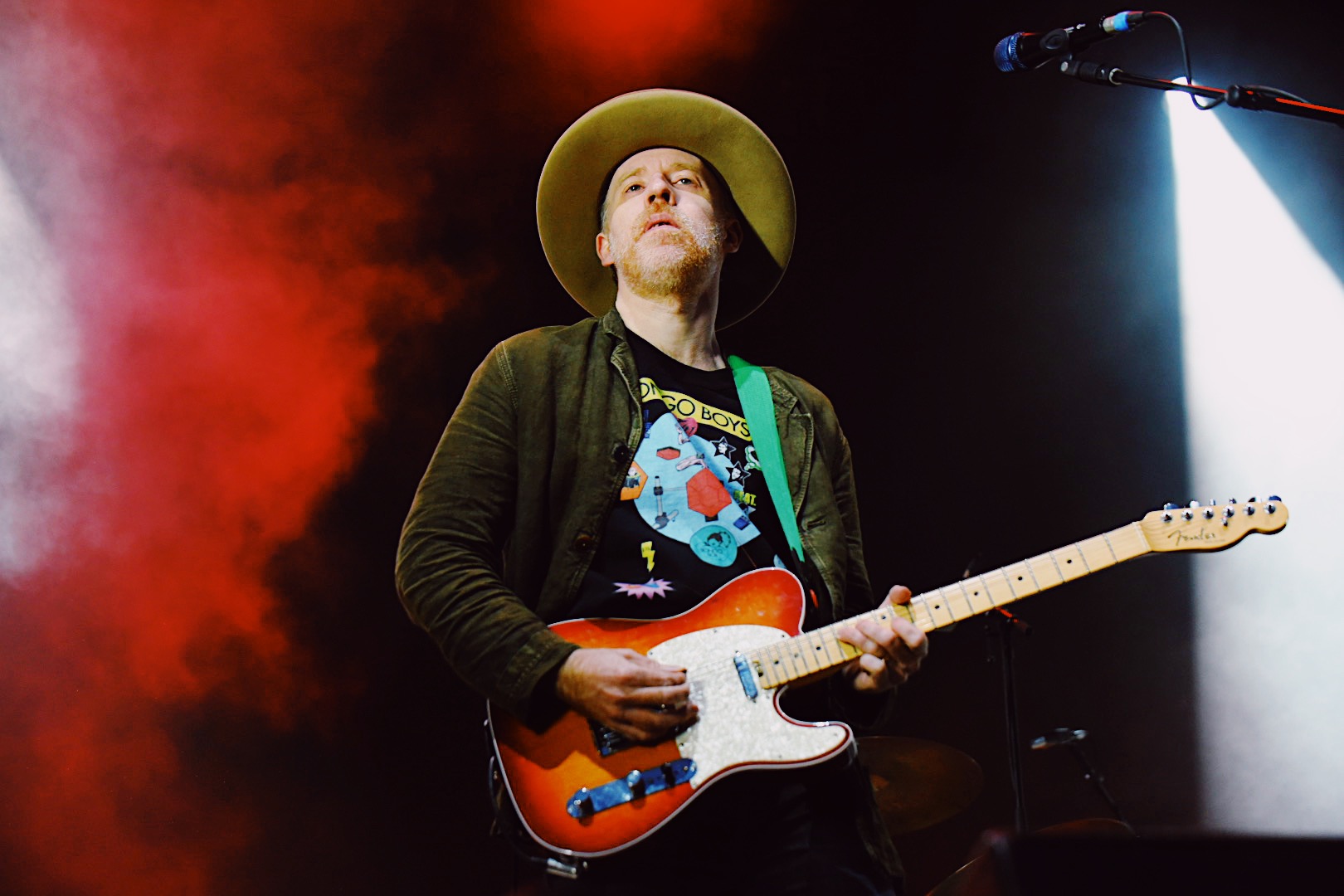 Processed with VSCO with au5 preset

'Huache Lights', 'Ready For The Floor' and opening number 'Flutes' brought the nightclub energy to the darkening fields, with 'I Feel Better' closing out their fiery headline set at 10:30pm. As Forbidden Fruit came to an end, the joy of live performance returned as if no time had passed at all. We basked in it, before heading straight home for a hot shower. But not before catching a Hot Chip DJ set at Lost Lane.

Hail or shine, the Irish know how to enjoy a festival experience. If Lorde says so, it must be true - right?

Countdown to Longitude: Irish Acts to Watch
Live Report: Aby Coulibaly electrifies Dublin's Sound House crowd
The Year Of Living Dangerously: "Is there any sensible way back from the brink?"