Harnessing the songwriting of Lauryn Hill, the bass-heavy soul of Erykah Badu and the contemporary production genius of James Blake, Aby Coulibaly's strengths also lie in the ability to capture the audience with her flair and personality.

Irish R&B sensation Aby Coulibaly has come a long way since releasing 'Taurus' in July 2020. Now sitting at over two million streams on Spotify, the young up-and-comer can blame the Covid-19 lockdowns for only performing her debut Dublin headliner in April 2022, nearly two years later.

Having relocated to London and set up Chamomile Records with her friends ('Smile' rapper Monjola included), the genre-blending artist - who has also built up a noteworthy following for her often-hilarious antics on TikTok - has unveiled a string of infectious singles paving the way for glory. The setlist for her headliner at The Sound House on Dublin's Eden Quay is rich and eclectic, but whatever she performs, the crowd go feral for it.

Before she ascends to the stage, however, emerging duo Negro Impacto deliver a stunning set of their own. Consistently underrated (in our view), vocalist Chi Chi and producer StrangeLove (Laurence Kapinga) serve effortless chemistry over warm and rich tracks. Heavenly vocals and woozy riffs offer an edgy Arlo Parks vibe. Fusing funk, electronic, R&B, hip-hop and more, the pair are the perfect outfit to get the stage nice and cosy for Aby. Not that they have to ask the crowd twice. 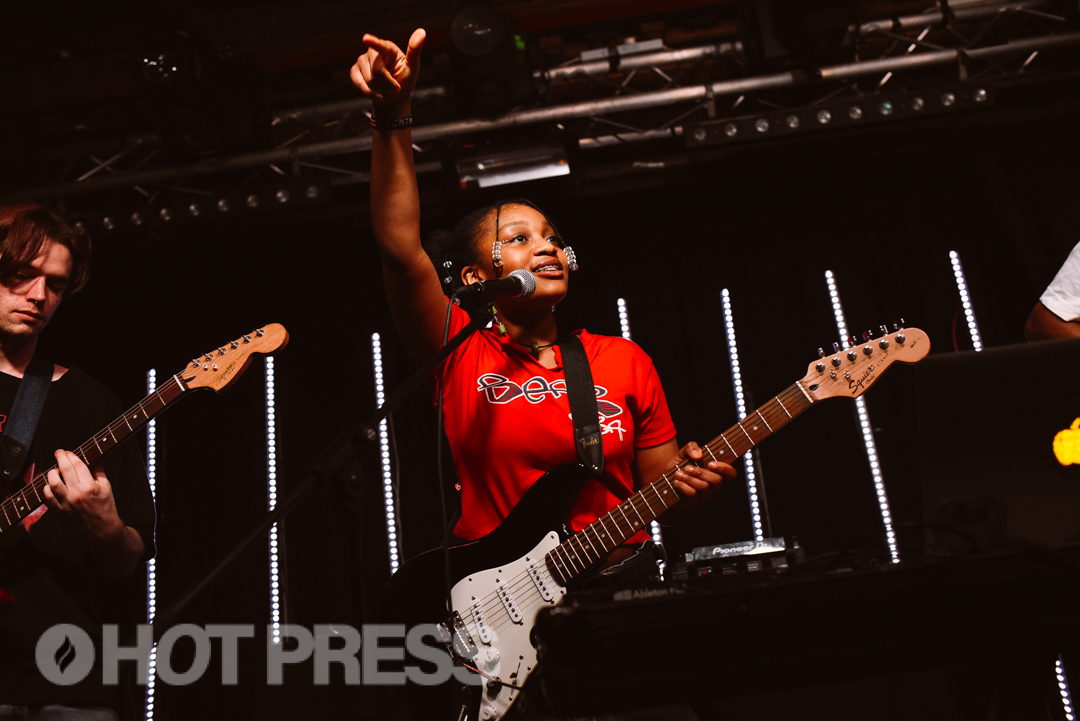 Hit '90s and early '00s US hip-hop tracks from OutKast, Usher, Missy Elliott and Ciara are blasted through the Dublin venue's speakers, leaving the smoky room of audience members ready and waiting for more. Wearing a white tracksuit with silver gems and cropped white top, the charismatic Dubliner is accompanied by her guitarist Paddy (who gets a shoutout) and a few videographer pals to capture the moment. Her long-time producer Moyo is behind her, looking calm and comfortable.

"I'm a bit shook," Aby says as the crowd cheer deafeningly loud. Keeping her cool, Coulibaly launches into debut single 'Taurus'. With the lyrics rejecting a past lover,  her voice easily switches between rich, melodic soul and a pull-no-punches rap. The production elevates the organic live instrumentation, providing the warmth and space to balance its boom bap rhythm. “Why you tryna call me? Wasting all my time / You know I’m in my zone," she belts, with a smile. "Me and my girls, we gon’ chill and fuck the world / You know we’re not alone."

Wasting no time, the musician delves into laidback R&B gem 'Chamomile Tea'. The recent single is presumably a nod to the inspiration behind her label's name, but describes her ideal night in with dark chocolate, "chasing sleep". There's not a dodgy note to be had in her live rendition, either. It's all sultry, butterfly vocals and confident stage presence. 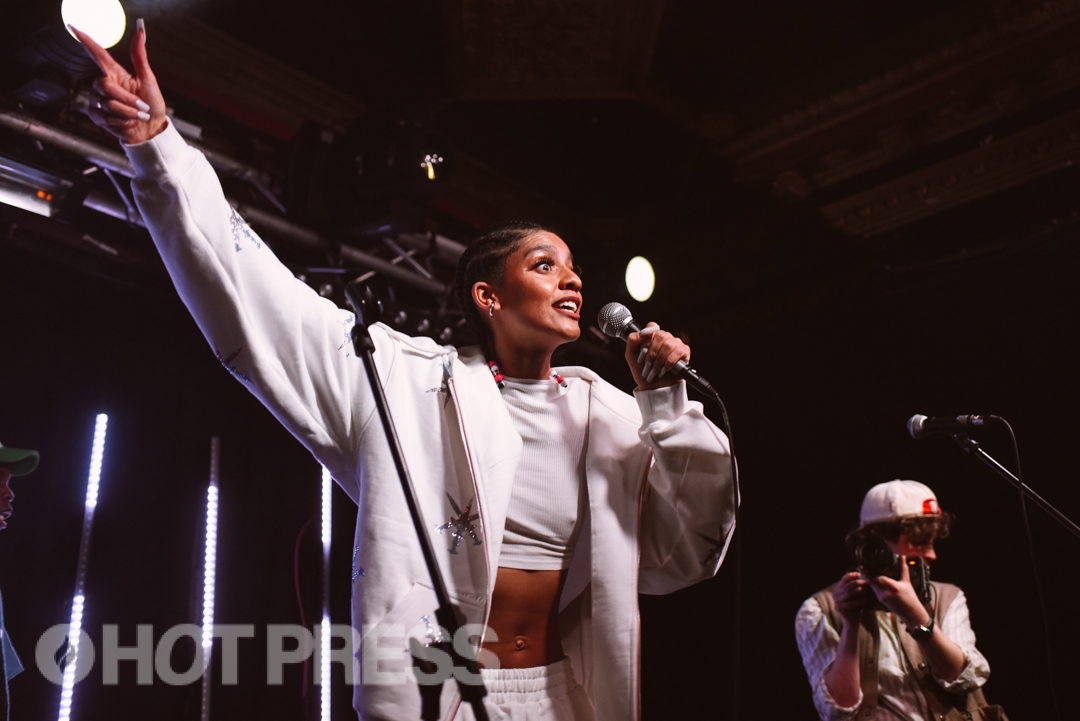 Slowing down the set a tad, Coulibaly asks the crowd to "do all that sad shit" for 'Maybe', which she penned when she was going through a rough time. "I know I'll see better days when the sun comes up," she croons, as the crowd gaze on, before she switches it up for a beat-heavy track ('I Need') about weed. Well, it was just 4/20 wasn't it? The lyric "Don't need a man, I can stand on my own two feet" gets an almighty cheer from the diverse (ever supportive) crowd.

'On My Ones' highlights Aby's tendency to do an "Irish goodbye" at parties (leaving without a trace, basically). One of her most recent releases, the single explores Coulibaly's wish to enjoy time alone and disconnect from social media. “I don’t need no more interaction / Replying to your texts is a distraction / I need a vacay, need some action / Need compassion, sorry Ms Jackson”. The addictive beat and soul-heavy vocals keep the crowd happy before Aby gifts the audience with an unreleased track (gasp). Titled 'Rewind', the song tackles the desire to go back to yesterday - before you went and f**ked up. 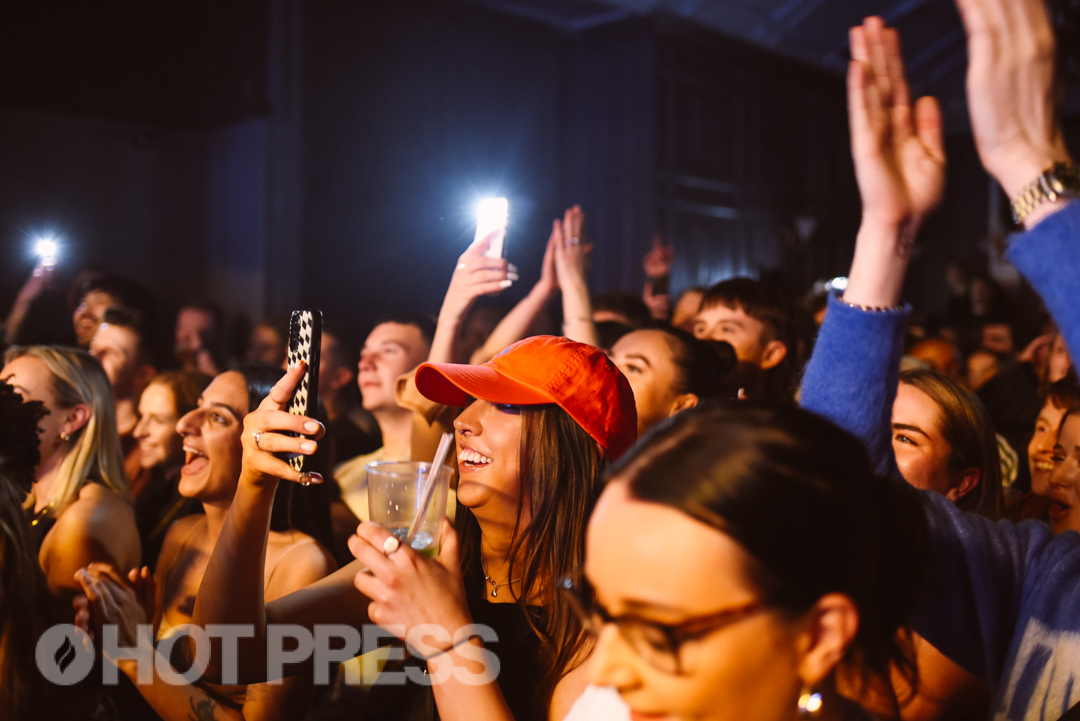 One of the night's highlights is 'I'll Be Damned', a ferocious hip-hop anthem that hits out at a former partner who cheated. Hard-hitting lyrics that get the crowd screaming at every line are on the menu: "Your friends are fugly, you are too / Looking at your stupid ass in the mirror." She maintains her tongue-in-cheek sense of humour with each verse, but doesn't hold back.

Next up is another unreleased track, 'Weekdays'. "It's about wanting to marry someone ASAP," Aby laughs. Self-deprecatingly singing about being "thirsty" gets a reaction from the audience, before a slick rap verse cements their appreciation. "My love language is physical touch," she belts. Lust and yearning never looked so cool.

Fan favourite 'Long Nights' explores the traits of women who don't support other women: "Tell me my ass looks phat even if it's flat!" Aby shouts at the crowd with a smile. "Insecurities so loud, feels like we're shouting," she sings, laidback and intimate vocals sizzling. 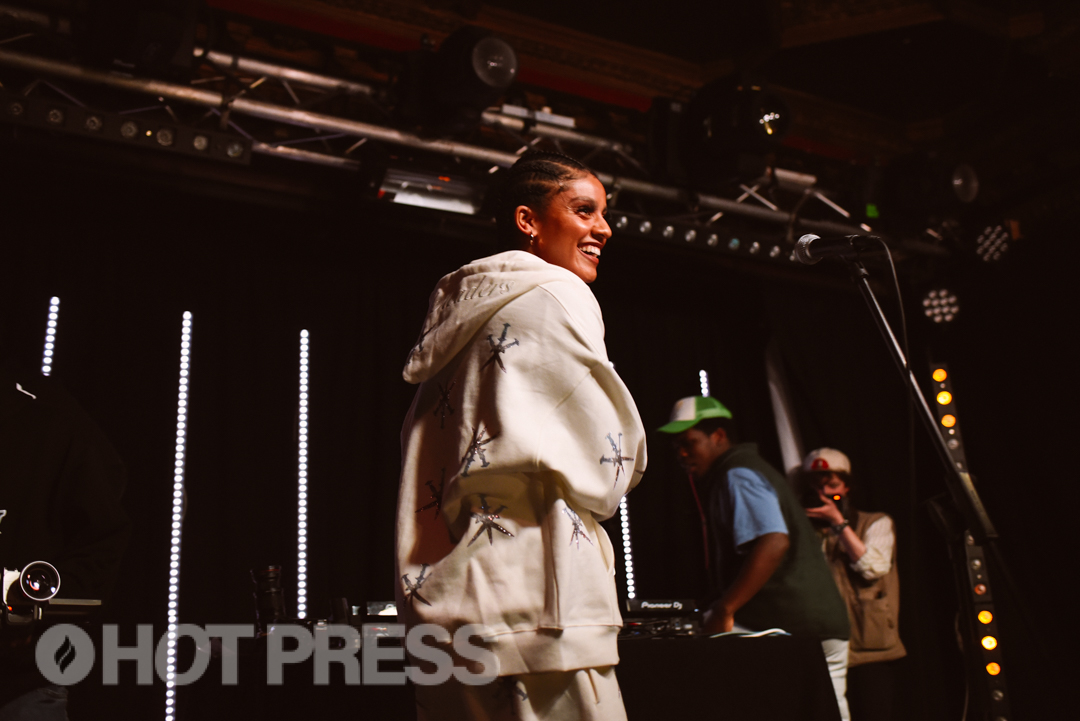 The audience roars as Aby brings on special guest Monjola, who has the crowd obeying his ever word with chants and requests. As a pair, they're magic on stage together. 'Where u at' shows off their easygoing connection, bouncing off the other's energy levels. Monjola's rap verse is as playful as it is clever, mingling beautifully with Coulibaly's glossy vocals. The duo take audience interaction to the next level, screaming "I know you want this" repeatedly for their finale.

Friends, family, neighbours and more all gathered to watch Coulibaly shine, and boy did she light the place up.

Hot Flavours: Original 7, Afro Delight, Churriosity, The Bear and more
Live Report: of all living things bring shoegaze brilliance to Workman's
New Irish Songs To Hear This Week
Album Review: Stormzy, This Is What I Mean
Wilko Johnson: Rocking and Rolling and Without Regrets
Graham Norton: "I would watch The Late Late Show and fantasise about being a guest. It never crossed my mind to be the other person, the guy in the chair"