The Strokes and Rick Rubin teamed up in Costa Rica for a new album
The Strokes at Electric Picnic 2019. Copyright Miguel Ruiz.

The rock band are back in action with producer Rick Rubin, who revealed the pair have been in Costa Rica this year recording an unannounced seventh album.

The Strokes recorded a new album with producer Rick Rubin on top of a mountain in Costa Rica, according to Rubin himself.

The New Abnormal producer revealed the information during yesterday’s episode of The Joe Rogan Experience, sharing, “A few months ago, I was in Costa Rica recording a new album with The Strokes. We rented this house on the top of a mountain and set the band up outside. So it’s like, they’re doing a concert for the ocean on the top of a mountain. And we did that everyday, it was incredible. They didn’t want to leave, it was like the best experience.”

The band have yet to acknowledge the existence of a new album, but the project would follow their 2020 release, The New Abnormal. Produced by Rubin as well, the album won The Strokes their first-ever Grammy in 2021 for Best Rock Album, beating out the likes of Fontaines D.C. 's A Hero’s Death and Michael Kiwanuka’s Kiwanuka. 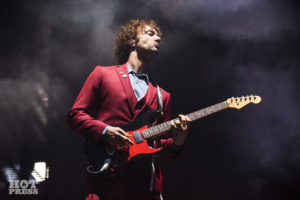 The New York City rock band recently opened for The Red Hot Chili Peppers during the North American leg of their summer tour, apparently after wrapping up recording in Costa Rica.

Rubin and The Strokes first teamed up in 2017, when the recording sessions for The New Abnormal first kicked off, and proved to be a reckoning force. Originally formed in New York City in 1998, the band has released six full-length records since their 2001 iconic debut, Is This It.

Check out The New Abnormal below.