Following the release of Venus, Cupid, Folly and Time, Neil Hannon reflects on 30 years of The Divine Comedy.

Neil Hannon is celebrating the 30th anniversary of The Divine Comedy with the kind of infectious, tongue-in-cheek humour we’ve come to expect from the Derry-born artist. With his reputation as a national treasure firmly established across three decades, twelve acclaimed studio albums and hundreds of stunning live shows, Hannon has rightly decided that a little time for retrospection is in order – with the release of Venus, Cupid, Folly and Time: Thirty Years of The Divine Comedy.

So what was going through 20-year-old Neil's mind all these years ago, as he signed his first record deal and set off on this new journey under the name The Divine Comedy?

"Basically, 'When do I get to play Croke Park?'" he recalls. "I was quite big for my little boots back then. It’s funny – in the boxset, we’ve got a couple of CDs of some really old things. We’ve called it Juvenilia. It includes the contents of this cassette I made when I was 15, of my earliest demos – my earliest attempts at songwriting. They’re diabolical. They’re just a wall of hiss, and some kind of weird soprano squeakiness. But I thought it was an interesting artefact. And the mere fact that I did this little compilation tape of my earliest stuff at that age, was because I thought, ‘I’m going to need this for the 30th anniversary boxset!’ That’s how confident I was."

However, he notes that this "wild" confidence he exuded in the '90s diminished as he got older: "Because you see what might have been."

"I started to look down in the 2000s," he says. "I had been wedded, for better or for worse, to Britpop in the ‘90s. And I somehow had to wrestle out of that straitjacket, to keep going. That’s when it became hard. It had been quite easy up to then – just kind of living the dream, and doing crazy stuff."

Reflecting back on these early years, he imparts these powerful words of wisdom to his younger self:

"'Don't worry too much about your ears. Yes, they seem to stick out a lot now – but you will actually grow into your ears as you get older'. Over the years they have seemed to protrude less from the sides of my head. I was really self-conscious about my ears. If you look at pictures, you'll see why.

"So if I was going to say anything to my youngest self, it would be that," he laughs. "Because for everything else, I'd just say, ‘Go for it’."

Undoubtedly, The Divine Comedy have navigated the trends and traps of the music industry remarkably well – over a period that saw plenty of flash-in-the-pan acts fall by the wayside. However, Neil admits it wasn't always so easy.

"The first thing I had to do in the 2000s, was to learn not be so fixated on the trappings of pop stardom," he reflects. "It was actually a great help when Top of the Pops finished, because it was my entire life’s work to get on it. And I did, repeatedly, in the ‘90s, and it was fantastic fun. But then it’s hard to let that go.

"The moment you realise, ‘Oh, I’m never going to be played on BBC Radio 1 again’, you start trying to get on Radio 2, because there's nothing else for it. That’s when you start to think, ‘I’m an old git now’. But the truth of the matter is, old gits have to go somewhere – and not to be too self-righteous about it."

Despite boundary-pushing new directions in his sound and vision over the years, he finds that the one aspect of his songwriting he's "never managed to let go of, is a need for urgency in the music."

"I’ve always battled against this urge to rush through things, in case people get bored," he says. "As I’ve got older, I’ve actually tried to calm it down a bit, and I've tried to wallow in the songs. But it’s a very good thing in new acts, to have that urgency and that excitement.

"I absolutely implore people to keep going, and keep taking huge risks," he continues. "It’s very hard for young bands to take risks these days, because the avenues for people hearing your music just seems to have narrowed a bit."

Indeed, he doesn't envy the position young artists now find themselves in – preparing to launch their careers, while venues around the world remain shuttered.

"I thought it was hard enough for young artists anyway, in the current environment – but this seems to have doubled that," Neil sighs. "I saw some terrible press report that said almost a third of musicians in the UK might just leave the profession, because there’s no way to make a living. That’s horrific.

"Are people going to have to have two jobs? That’s sad, because with music, you have to throw yourself into it, 100% – almost to the detriment of the rest of your life – in order to make music that is essential."

Like many artists, he's looking to the Government to step in and take action.

"The Government needs to be quite free with social services, and with unemployment benefit – and not be all up in our faces about getting a job, if there are no jobs out there," he reasons. "It certainly helped me a good deal in my early years – I was on the dole for bloody centuries. Without it, I don’t know how I could have really started. They used to joke that it was called the ‘Young Musicians Allowance’.

"I know the Government is trying to keep everything balanced, and that’s good," he adds, "but life is worth nothing without art and music and books and these things that we amuse ourselves with. Otherwise it's just drudgery."

Emerging artist also have to deal with the pervading expectation that music should be a free, immediate service.

"I was so anti-Spotify, until I realised, that’s just the way it is now," Neil notes. "I had to come to terms with it. Artists almost need to be unionising, to make sure they get paid properly. Without the music, Spotify doesn’t exist. It would just be bloody podcasts! It’s important to use all our power, to keep them honest – and to get the cheques.

"It’s like any of these new multinationals, like Amazon or Apple," he continues. "They all take as much as they possibly can, until they’re brought in kicking and screaming to pay people. Why? I like to think, if I was Jeff Bezos, and found myself with half the world’s wealth, I’d say, ‘Well, I don’t need all this… I’ll spread it around a bit!’ It seems extraordinarily hard for billionaires to do anything good with their money."

Although Hannon has woven clever political commentary into his songs in the past, he states that he doesn't "generally think it's a good look."

"It can be a bit preachy," he argues. "I tried to avoid that preachiness on Office Politics. But my dad was a preacher, so it runs in the family. Also, I don't want to come across all Bono! No, I love Bono..."

Even so, when it comes to his politically charged music, Neil admits that there are times he just has "to let it out".

"I had all this frustration and anxiety about what was going on out there," he says. "I'm just desperate for Joe Biden to win the US election, for Fine Gael and Fianna Fáil to listen to the Greens, and for a bit of sanity to reign in the world. Also, I'm desperate for humanity to recognise the huge traps that it's throwing itself into – be that right-wing populism, or the possibility of ending life on Earth with climate change. I just want it to pull back from the brink – because then I can start writing about silly stuff again, which I vastly prefer.

Although his work on the Father Ted musical has been put on hold for now, Neil's been able to keep busy during lockdown with other projects.

"Luckily I had this small Irish film to write music for," he says. "I’m not entirely sure what it’s going to be called. It’s about time travel, weirdly. But it was good timing, because that’s something I can do in my little studio at home. I had a burst of creativity with that in August, and it was great fun.

"And now I’m sort of left, again, twiddling my thumbs. I’ve been thinking very hard about what sort of music I could possibly write… And I haven’t come to a conclusion yet! It feels like a bit of a turning point, really. I wouldn’t hold your breath, though. Then again, nobody’s holding their breath for the next Divine Comedy album!"

Self-deprecating humour aside, Neil considers himself "one of the lucky ones" in the midst of the ongoing pandemic.

"I'm not going to moan at all," he reasons. "I have a nice house in the country, and I was always pretty unsociable anyway. I've got lots of dogs for company – and an occasional girlfriend!"

Indeed, one of the highlights of Other Voices' Courage series featured Neil performing alongside his partner, singer-songwriter Cathy Davey.

"That was bizarre," he reveals. "Initially they were going to have us in Derry, and then at the last minute they said, ‘Actually we’ve got another venue, called Glenveagh Castle in Donegal’. I went, ‘Oh my god – yes, I want to do it there!’ My mum grew up on the estate of Glenveagh, during the war. Her dad, my grandad, was an estates manager for the owner. So it was just weirdly coincidental to end up there. And it’s just such a stunning landscape. I almost feel nervous when I’m driving through it, it’s so awesome."

Although fans will have to wait until September 2021 to see The Divine Comedy performing in the flesh –  with five nights at London's Barbican and five nights at Paris' Cité de la Musique – there's plenty of remastered material in the 12-volume CD boxset Venus, Cupid, Folly and Time to tide us over until then.

The albums featured in the collection were remastered from the original tapes at the legendary Abbey Road Studios.

"I had to listen to my own albums far too often," Neil says of the process. "It was akin to mental torture. Not because I dislike my music – I bloody love it. But, oh God, there’s so many embarrassing moments, and things we got wrong in the studio. Why did I stick that pointless middle eight in?!

"In terms of mastering, Frank Arkwright is one of the best," he continues. "He’s very giving – he really wants to make the artist happy, which is not always the case in our profession. It was a good experience – the whole reissuing process, and trying to collate the extra tracks, and trying to get the artwork right. I ended up writing about 2,500 words of liner notes for each record. Maybe next year, I can start thinking about new stuff again – which is really what I do. I’m not very good at looking back. But I feel that now is a good time to do that. " 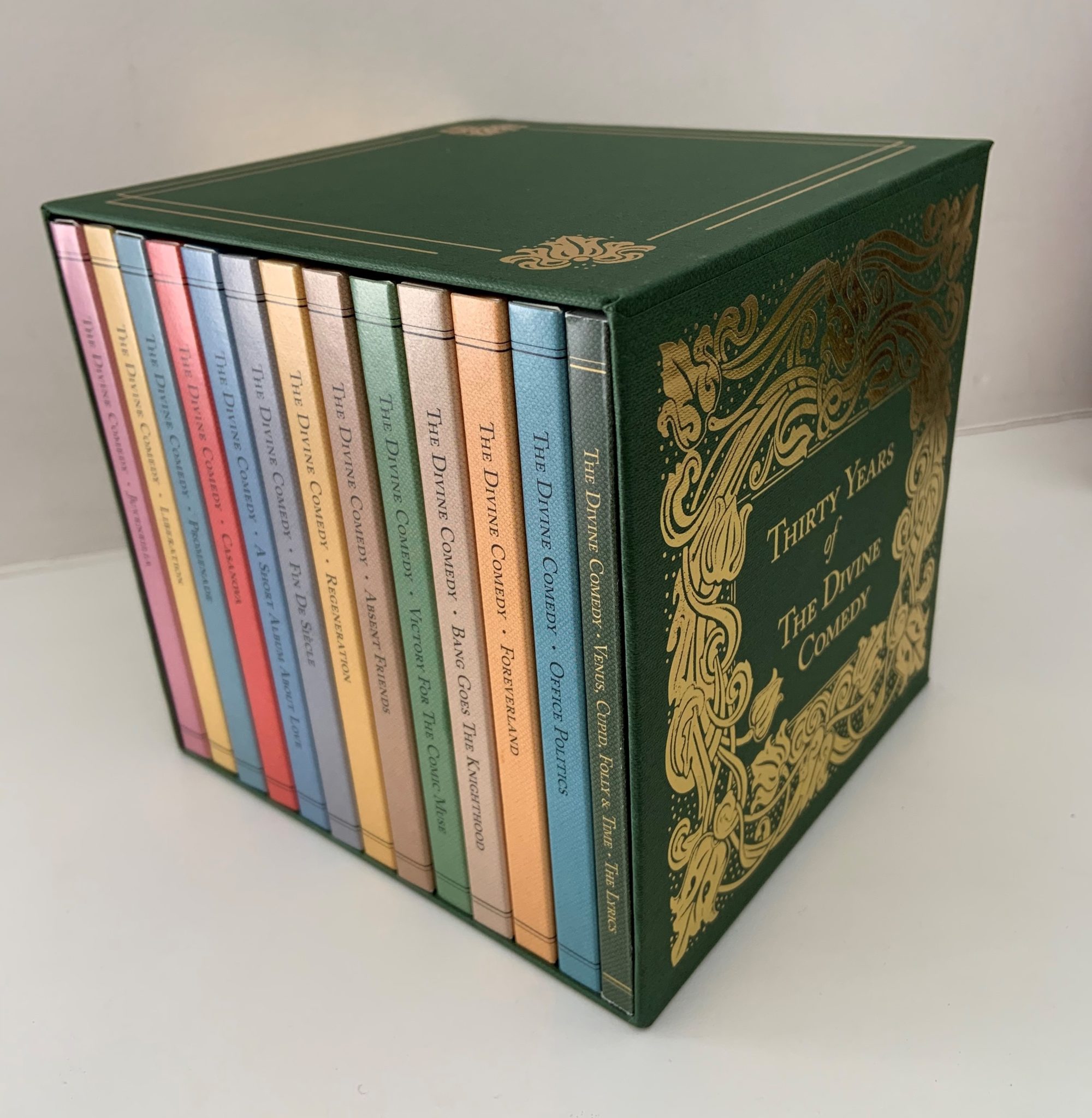