Saturday’s lineup for the Mitchelstown, Cork Co. festival was packed with a range of excellent acts from self-proclaimed "grumpy electro-pop" artist ROE, to Ireland’s favourite singer-songwriter Gavin James, to headlining alternative band Catfish and the Bottlemen. There was certainly no shortage of excellence at Indiependence.

When we checked the forecast for Saturday, we dreaded the thought of leaving the protection of the tent to venture out into the wild, wet Irish summer for day two of Indiependence. Boy, are we glad we weathered the storm. With a taste of seemingly every kind of music, from electro-pop to rock to alternative and everything in between, Saturday at Indiependence catered to everybody. There were an estimated 15,000 people in attendance and the energy was palpable at each of the three stages. Performers and fans alike came together for a brilliant day of sharing our passion for music, despite the weather.

Luckily, the clouds parted and the sun shone bright when ROE took her place front and centre on the main stage on Saturday afternoon. Well, not actually, but it sure felt like it. Nobody noticed it was raining buckets because they were too busy dancing along to the electro pop singer play bop after bop. The playful melody in ‘Girls’ allowed ROE to show off her impeccable vocal range. And in ‘Wasted.Patient.Thinking.’ she demonstrated why she deserves the multi-instrumentalist title with one hand on the synths, another smashing the electric drum pad, and her foot on the loop pedal, only to jump right back onto the guitar a few bars later.

The highlight of the set though, was when ROE announced her next song, ‘Hey Thomas’ was “a fuck you to all the bullies in the world” and encouraged the cheering crowd to dance along. And that they did, letting loose into a carefree and judgement-free cacophony of dance moves. We weren’t kidding when we named her a Hot for 2019 Irish Act: ROE delivered with a stellar performance on par with that of a global star.

State Lights, who recently announced a headline gig at Whelan's this October, later gave the audience a taste of why their style of alternative rock has been gaining traction in Ireland and beyond. Opening with their hit ‘Freedom’, a heart-thumping track with ‘80s synths, they set the tone for an invigorating and upbeat show. They also delivered a stellar performance of their 2018 single, ‘Peace Will Come’, which was supported by 2FM, featured as the Homegrown Hero and Artist of the Week on Today FM, and gained the band a performance on ‘The Late Late Show’. The band eventually pulled everyone to their feet with a cover of ‘Radio Ga Ga’ which lead singer Shobsy performed with all the confidence of Freddie Mercury himself.

As night began to fall, the members of Wild Youth sauntered one-by-one onto the Indiependence main stage with all the pomp and ceremony of weekend headliners. Once they were all united on stage, they dove right into their latest single, ‘Long Time No See’ maintaining the promised energy of Ireland’s next big boy band. After all, they did open for Westlife’s sold out shows at Croke Park last month. Frontman David Whelan gyrated and thrusted while hitting the highest of notes from the first song all the way til the last note of the set. His energy was palpable throughout the crowd who bopped along and sang every word of ‘Making Me Dance’ and ‘All or Nothing’, some of their biggest hits. Halfway through the set, Conor O’Donohoe draped an Irish flag across his keyboard and the crowd went wild. They closed out the show with the crowd-pleaser, ‘Can’t Move On’, which had the whole audience singing and clapping along. At the end, the band lined up at the front of the stage for a selfie with the crowd to celebrate another successful performance then bowed out, the shrill sound of their fans’ cheers still ringing loud. 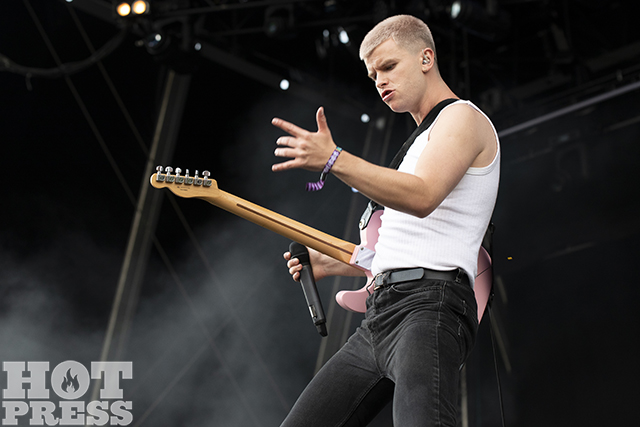 When Irish electronic indie pop duo All Tvvins released their latest album, Just To Exist, earlier this year, they revealed to Hot Press that the goal of their music was to create an escape for themselves and audiences. “Our uplifting songs usually start dark, and end with a feeling that it’s going to be okay. That’s our message,” band member Conor Adams told us. Their electrifying main stage set surely accomplished that goal, taking the audience out of their cold, dreary reality and into another world where we could just dance and let loose.

The band opened with their hit ‘Thank You’, an infectious tune that ensured the audience that they would be on their feet and grooving for the entirety of the set. The roar of fans singing along to every song thereafter filled the night with the exact feeling of comfort All Tvvins set out to create. They really hit the mark with their performance of ‘Hell of a Party’, which felt like, well… a hell of a party. The kind of atmosphere All Tvvins created is exactly what you expect from a summer festival: a carefree place to celebrate music by dancing and singing as loudly and wildly as possible.

Meanwhile, homegrown hero Gavin James filled Indiependence's Big Top Stage with more talent than it could handle. Seriously, why wasn’t this guy on the main stage?! He opened the show with ‘Glow’ off his newest album, Only Ticket Home, and showered his fans with confetti as they sang along nearly louder than him. Fans could barely pack into the outskirts of the tent to catch a glimpse of the star while he delivered excellence song after song. Before diving into a heart wrenching rendition of ‘Coming Home’, James shared a light-hearted moment with the audience, welcoming them to his show and dedicating the song to his fellow gingers in the audience.

The Indiependence crowd truly went wild with the unabating energy to clap, sing, and dance along to his performance of ‘Tired’. And as if the tent wasn’t already overflowing with excited festival goers, the energy in the room by now was thunderous enough it felt like the roof could quite literally blow off. Capitalising on the moment, James sampled the viral ‘Old Town Road - Remix’ by Lil Nas X and Billy Ray Cyrus at the beginning of his song ‘Always’. There wasn’t a moment of Gavin James’s performance where the audience wasn’t locked in and feeling the music as emphatically as if they were up on stage with him.

When we left the Big Top Stage, we didn’t think the night could get any better. Little did we know, Catfish and the Bottlemen had planned an out-of-this-world performance to close out the night at Indiependence. The stage flickered to life with a bright white outline of a pelican sipping out of a can (the album art for The Balance, their latest album) and the band ran out and took their places. And the crowd of thousands packed in even tighter when they hit the first note of ‘Longshot’ to open the show. The cameras – normally fixated on the band – turned around for a moment to reveal the audience with their hands in the air, bopping along to the infectious melody.

With three albums chock-full of “sonic earthquakes”, it must have been hard for the band to curate the set list for the show, but they managed to fit in more than ten songs and barely came up for air. They followed the opening with intoxicating renditions of ‘Kathleen’, ‘Soundcheck’, and ‘2all’ and frontman Van McCann hit every single note with ease and swagger. The highlight of the set was undoubtably when the band took it back to one of their first ever hits, ‘Cocoon’ and the crowd thundered in approval. In the chorus, people threw their heads back in euphoria and sang along, “But fuck it if they talk / Fuck it if they try and get to us”. This is what we came for.

Catfish and the Bottlemen closed the night with ‘Tyrants’, another classic from their debut album, The Balcony which catapulted them to fame in 2014. In a rocking symphony of “oh’s” during the bridge, the band became one with the audience. It was truly a night to remember with McCann and company – Johnny Bond on guitar, Benji Blakeway on bass, and Bob Hall on drums. Their no-gimmicks-all-talent performance brought a brilliant second day at Indiependence to a thrilling new height. That is, until Sunday…

Hot Press' 2019 Tracks of the Year: 20-11
Hot Press' 2019 Albums of the Year: 40-31
Sorcha Richardson drops a new single and announces debut album
Somebody's Child releases new single 'Jungle'
All Tvvins announce 3-night stint at Whelan's
All Tvvins drop a new single, 'Divine' ahead of their Irish tour
We use cookies to ensure you get the best experience on our web site - by using this web site you consent to our use of cookies. Read more »