Wolf Alice's Theo Ellis on Electric Picnic: "It was probably one of the first festivals to take a punt on us"
Credit: Jordan Hemingway

As Wolf Alice prepare to make their eagerly anticipated return to Electric Picnic – following previous appearances in 2014, 2016 and 2018 – bassist Theo Ellis discusses his memories of the festival, some of his favourite Irish acts, and the Mercury Prize-winning band’s latest EP, Blue Lullaby.

It’s a nonchalant description that you wouldn’t expect from most bands who’ve been invited on tour with one of the biggest acts in the world. But London four-piece Wolf Alice – despite now having both a Mercury Prize and a Brit Award under their belts – have always had an endearingly ordinary, unaffected air about them.

Three albums in, the band’s ever-expanding approach has cemented their status as one of the UK’s most critically-adored bands, and the unique honour of being one of the only acts to score Mercury nominations for every album they’ve released. The fact that they’ve spent a significant chunk of the summer touring Europe with Harry Styles is also a reflection of their unique sonic position – simultaneously embracing ‘90s-informed alt-rock, expansive pop, anxious introspection, and irrepressible energy, as they continue to tread the line between mainstream success and independent innovation.

“He’s lovely, and the whole crew is lovely,” Theo says of the former One Direction star. “The tour just has a great vibe. All the shows have been really fun – he’s made a fantastic atmosphere.”

Wolf Alice joined Harry on the latest leg of the tour at the end of June, directly after their lauded set at Glastonbury’s Pyramid Stage – which very nearly didn’t happen, after their flight from Los Angeles was cancelled. Although the band ultimately found an alternative route to the festival, Theo admits that his nerves were in overdrive by the time he and bandmates Ellie Rowsell, Joel Amey and Joff Oddie made it onstage.

“I was just so wired and panicked!” he laughs. “I hadn’t been to sleep in two days. I’ve just got too much anxiety to watch that show back.

“There’s not much you can do when you’re stuck in transit,” he adds. “You just kind of have to deal with it, but we were pretty nervous to get there.”

There wasn’t much time to relax after the set, either.

“We were opening up for Harry in Hamburg on the Sunday so I got to watch the Sugababes at the Avalon Stage, and that was it!” he recalls. “Then I got really drunk, and then I got in a car that got me home at like five in the morning. We had to fly the next day to Germany.”

Their Glastonbury performance also coincided with the release of a new EP, Blue Lullaby. The project is made up of poignant, stripped-back versions of some of the stand-out tracks from their latest LP, Blue Weekend – which was named International Album of the Year by Hot Press at the end of 2021. After experimenting with an acoustic arrangement of Blue Weekend’s ‘How Can I Make It OK?’, the idea for the EP was born.

“We did that a while back,” he resumes. “We just loved making that version of the song, and then we had the idea of rearranging a few more of them that lend themselves to being stripped back. It was a really fun process. We worked on it with a guy called Iain Berryman, who engineered the whole of Blue Weekend. We went to Church, which is a gorgeous studio in North London that Paul Epworth owns. We hung out there for a week, and did the rest of it when we came back from America, for another week.”

“It’s got beautiful violins in there, and it’s an acoustic guitar song so it ends up in that country-ish world, I suppose,” Theo considers. “We’ve always been fans of Alex G’s songwriting. There’s quite an acoustic-influenced side to our band, that people maybe don’t know too well. We’re just exploring it a bit more.”

“I feel like I incorporate it in ways that are not so obvious, just because I grew up playing it,” she said at the time. “A lot of trad music you learn by ear, and that gives you an ear for melody. So I think that subconsciously works its way into my music.”

“That’s where she learned to sing originally – in a choir in the Irish centre in Holloway, in North London,” Theo tells me. “So it’s a natural influence. There would be a lot of those different kinds of melodies. Those things are ingrained in you, if you grow up in that environment.”

They’ll have the chance to reconnect with those Irish music roots in September, as Wolf Alice make their long-awaited return to Electric Picnic. The band have an impressively long history with the festival, having first played it in 2014, a year before they’d even released their debut album, My Love Is Cool. They were back in Stradbally in 2016 – stopping by the Hot Press ChatRoom ahead of their performance – before returning once again in 2018, following the release of the Mercury Prize-winning Visions Of A Life. 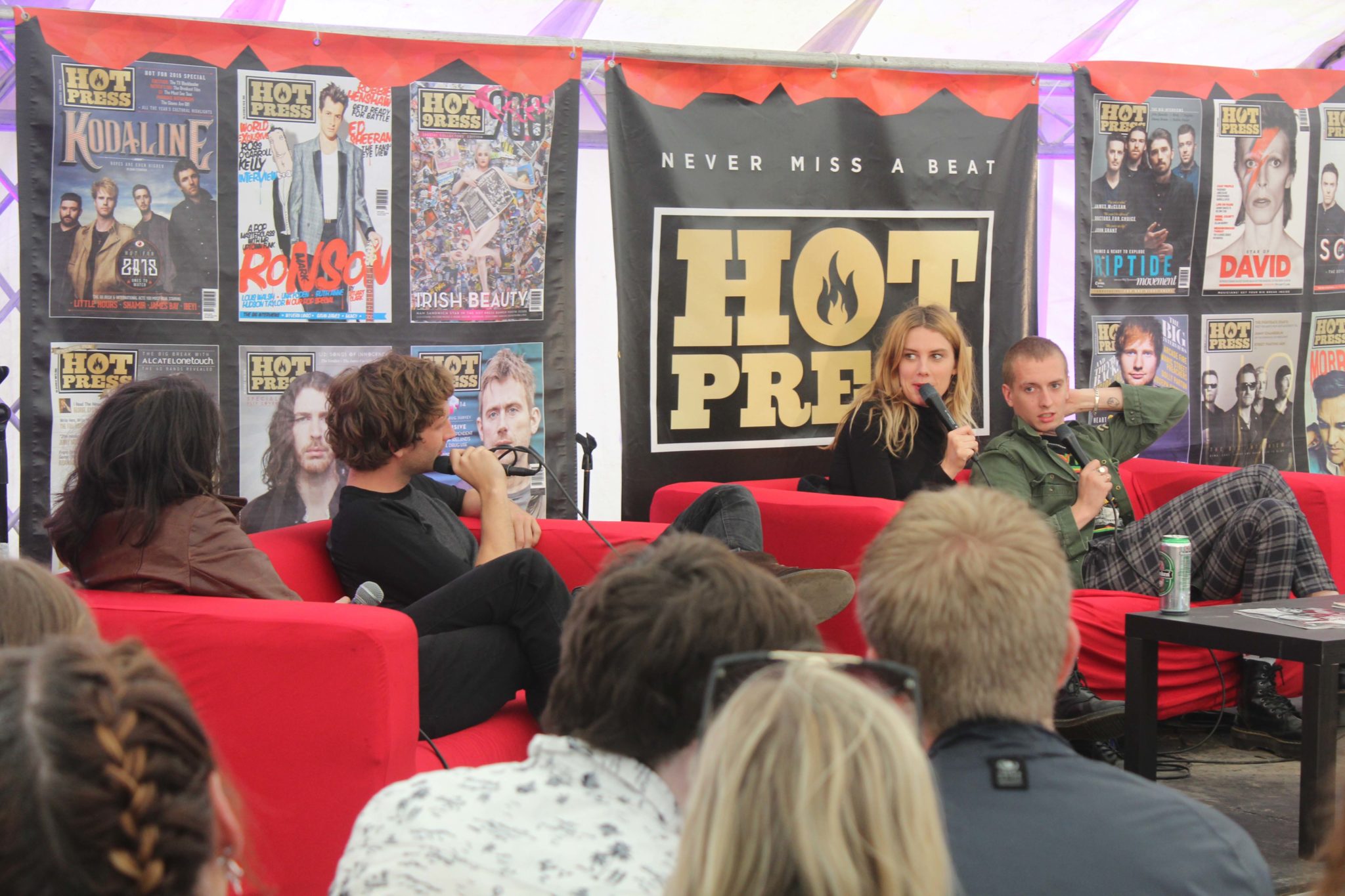 “We first played it about eight years ago when we were a really little band,” Theo reflects. “So it was probably one of the first festivals to take a punt on us. It will be amazing to get back there. It’s a great festival – and it’s always a good vibe. I remember watching The Chemical Brothers at it.”

Their Picnic slot follows a string of headline Irish shows, including two nights at 3Olympia Dublin, and a night at Belfast’s Telegraph Building.

“We always have a great time whenever we go to Ireland,” Theo reflects. “It’s always been a really amazing crowd, and a pretty joyous experience. We’ve got some family coming over for the Dublin show, which always makes things even more fun.”

And his favourite Irish acts?

“There’s certain ones that are always on my playlist – like The Dubliners and The Chieftains, but that’s really old...” he muses. “Oh, and Fontaines D.C.! Fuck me, a huge Irish band. They made one of the best records of last year. I really love those guys.”

Following their Irish dates, Wolf Alice’s monumentally busy post-lockdown year of gigging continues, with their North American tour kicking off in September. Of course, Theo is well aware of the kind of physical and mental toll life on the road can take.

“If you’re doing as many shows as we’re doing – we just did seven shows in a row, in seven different countries, with no days off –  you need to make sure you don’t do anything stupid,” he points out. “And the older you get, the more you need to take care of yourself. But we all know our limits.

“Everyone in the crew, and everyone who’s on tour with you – you need to look out for each other,” he continues. “Because you’re away from home for a long time. It’s important that no one, mentally or physically, goes under. You’ve got to try and keep everyone feeling good, enjoying what they’re doing. Because it can be tough, but it’s also very rewarding.”

And despite their hectic schedule, he reveals that Wolf Alice have been working on “a few different ideas” for new material while on the road.

“We want to be able to get into the studio, quicker than we usually would,” Theo tells me. “None of us are too burnt out, and we’re all excited about the prospect of new music. So we’ll see – maybe there might be something this year…”

Blue Lullaby is out now. In addition to their Saturday Picnic performance, Wolf Alice play the second of their tw0-night run at 3Olympia Theatre, Dublin tonight (August 30). They also play the Telegraph Building, Belfast (September 1).