The Fontaines D.C.-curated charity gig showcased the best Ireland has to offer with performances by The Murder Capital, Kneecap, Just Mustard, The Altered Hours, Melts, Stefan Murphy and the Mary Wallopers.

Rock Against Homelessness at the Olympia Theatre delivered one of the most impactful nights of music the city has seen, both sonically and politically. The lineup was straight out of a dream – which is no surprise, considering Dublin powerhouses Fontaines D.C. curated (and headlined) the event in response to the national homeless crisis. A wonderful mix of some of the best names in rock (and hip-hop) coming out of Ireland, each act showcased the unique sounds that make the scene so special. To top it all off, the event raised almost €70,000 in aid of Focus Ireland, proving just how much good can be done when the sheer power of a group bonded by a passion for music is harnessed. 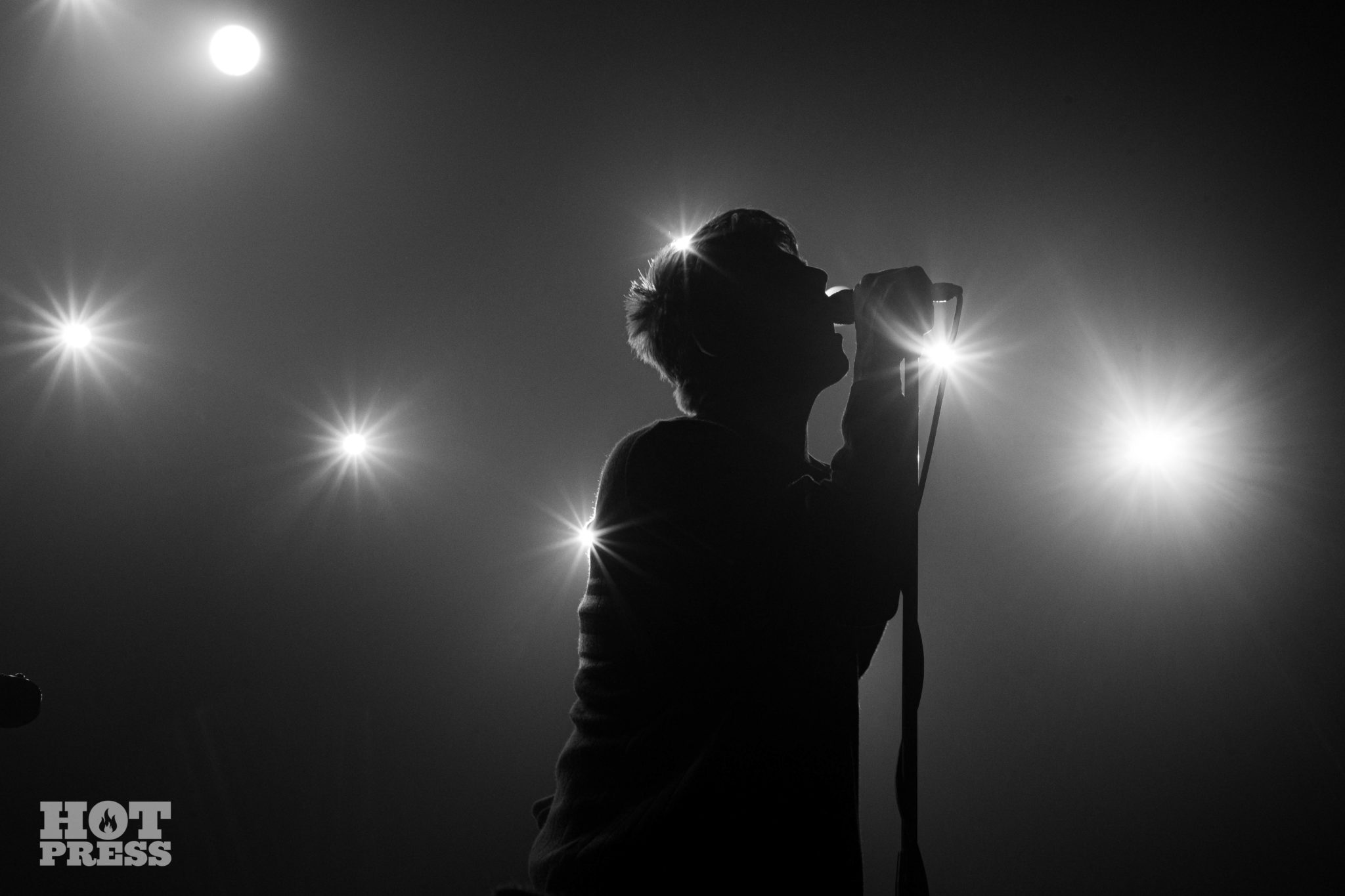 The Mary Wallopers, introduced as “the prettiest and most horny ballad act you will ever see”, opened the night with their reinterpretations of Irish trad ballads. The music is a far departure from the Dundalk brothers’ equally popular tongue-in-cheek hip-hop project, something one audience member pointed out with an excited shout of “TPM!”, but it’s something truly special. The trio filled the air with impeccable, hypnotising harmonies. Their sound felt much bigger than the group sitting on the stage, even when their voices were accompanied by solely a hand drum. Acoustic guitars and a banjo only added to the magic as they closed with the ever-charming ‘Cod Liver Oil & the Orange Juice’. The audience, which had just about doubled in size by this point, delightfully sang along. A perfect primer for the intensity the rest of the night would bring.

The prolific Stefan Murphy brought the mood a tad darker and louder with a fuzzy rock and roll sound. Having previously worked with The Mighty Stef, Count Vaseline and Subtonics, it was a delight to watch the now Atlanta-based singer-songwriter hone his own style. He made an entrance with bone-shaking bass before jumping into more energetic and melodic sounds. His excitement peaked with ‘Dry Cider’, his only solo single so far, as he stepped past the speakers to the edge of the stage to belt the anthem of freedom. His experience as a frontman was clear – Murphy’s command of the stage and massive sound felt worthy of a headlining festival set.

Melts took the stage with a low-key introduction before diving into a hypnotic set of psychedelic post-punk. After hearing their studio singles, there was no way to prepare for the intense walls of sound Melts would create with the help of the Olympia’s stereo system. Droning feedback and krautrock-inspired riffs were complimented by psychedelic melodies and almost Ian Curtis-esque vocals. The stage was shrouded in red light as the sounds got more brooding and gothic. It was so easy to lose myself in the music – by the time their 15 minutes on stage had ended, I felt like I’d just spent an hour on a different planet. They’ve only got four singles under their belt for now, but this year will thankfully see the release of their debut album, recorded in Berlin, perhaps the most fitting location for their distinctly German-inspired sound.

The Altered Hours added a taste of spellbinding shoegaze to the punk theme the night was beginning to take on. The frontwoman donned a tambourine (an instrument almost every act that came next would utilise) as she lost herself in the hazy sounds around her. One of the guitarists stunned with a 12-string electric guitar, essentially attacking it with a high level of intensity. They traversed a fine line between tranquillity and chaos, sometimes offering mesmerising fuzz, other times playing straightforward punk sounds. I’m tempted to bring in a Sonic Youth comparison, but it feels too reductive. The similarities are there, but the band seem to be in a league of their own.

The shoegaze influence continued with Just Mustard. They opened with ‘Frank’, which started out melodic and minimal before fuzzy guitars and feedback overtook the final third of the song. Each song would follow a similar pattern — a calm, haunting start that finally erupts into a violently chaotic blend of reverb, shouting and heavy riffing. Katie Bell's ethereal vocals were never overpowered by the heavy band that accompanied her. Everything instead worked together to create an eerie, almost brain-melting experience. Their music became even more dynamic and exciting in the live setting.

If there’s one Irish act that should perform at an event in response to a crisis at the centre of Irish politics, it’s Kneecap. The hardcore hip-hop trio, who have been proudly condemned by the DUP, keep politics at the forefront of everything they do. Nothing cemented this better than their introduction to ‘Incognito’, in which they pulled out a poster of Leo Varadkar and threw it into the audience as part of a discussion about homelessness being the fault of those in power. Their intensity fuelled one of the most engrossing and chaotic live sets I’ve ever seen. The stage couldn’t contain the trio as they chased each other and jumped in and out of the crowd, eventually crowd surfing during hit ‘C.E.A.R.T.A.’. Beer and sweat soaked the crowd as they chanted along passionately. Kneecap even handed the mic over to one of the fans at the barricade, who took over for a chorus. Despite being the only act not billed as a rock band, Kneecap fit the night’s energy perfectly. A definite must-see act.

Just days after a sold-out headline gig at Vicar Street, The Murder Capital shook the Olympia Theatre with their uniquely tender and energetic take on punk. Guitars screamed as the band opened with the relentless 'For Everything', also the opener for last year's full-length When I Have Fears. Once again, they were met with an excited crowd of fans who shouted nearly every lyric right back to them. Frontman James McGovern took a minute to remind the crowd why everyone was there — empathy. "Be empathetic to people on the street", he asserted before jumping into the slower-burning 'Green & Blue'. The well-controlled energy kept building until McGovern ended the set in a tangled mess of wires, carried by excited fans on the Olympia's floor. 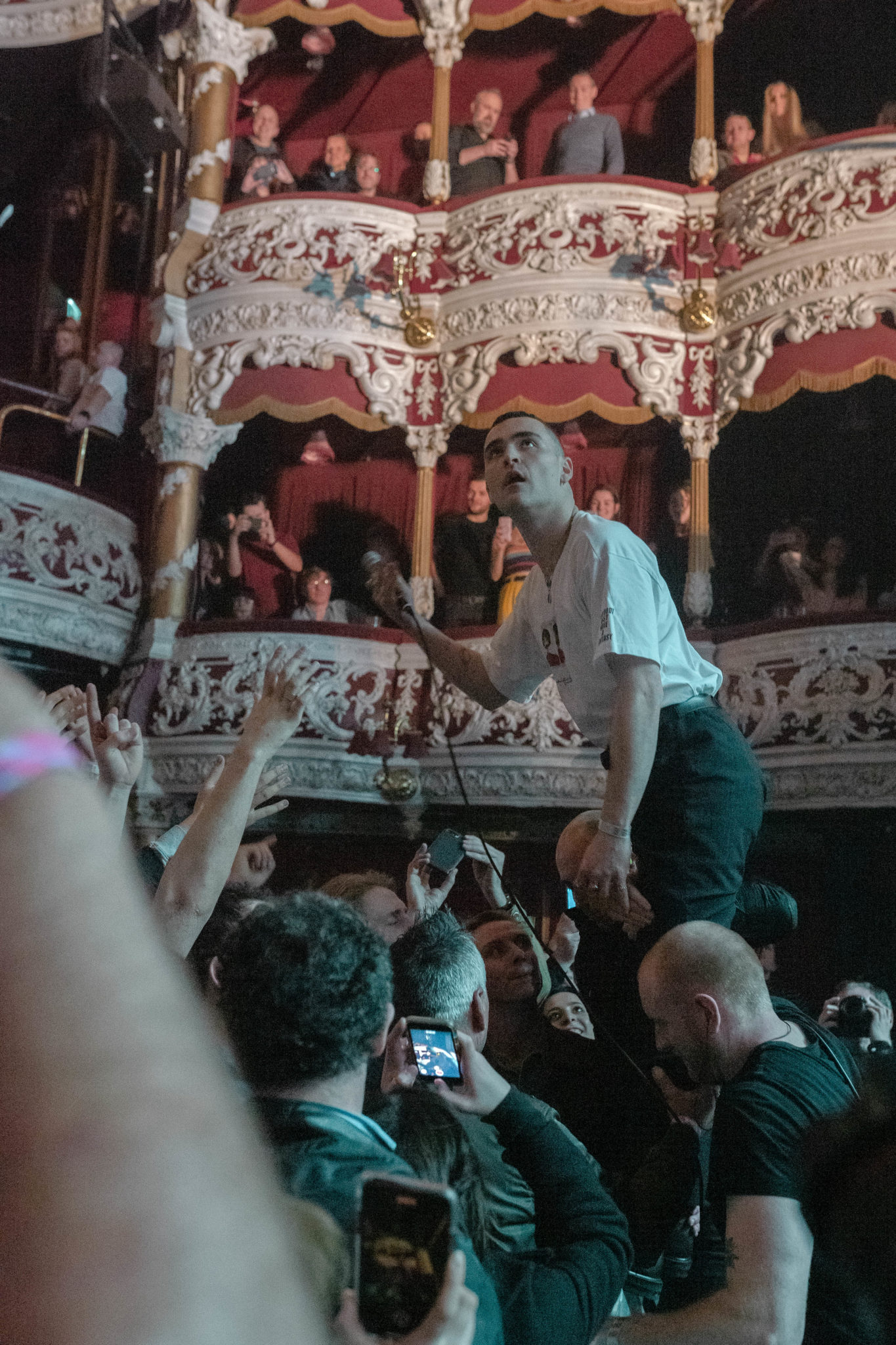 The Murder Capital at Rock Against Homelessness at The Olympia Theatre. 3 March 2020. © Brenna Ransden

‘For What Died The Sons of Roisin’ blared through the speakers as curators Fontaines D.C. prepared to take the stage with a 30-minute headlining set. Preparing to play a slew of big-ticket international gigs (hello, Coachella...), the five-piece are on track for their biggest year yet. The release of Dogrel last year put the band on everyone's map, but it's their live show that seems to have cemented their status as soon-to-be legends.

The beginnings of a mosh pit had been slowly building throughout the past few sets. Once the first notes of the blistering 'Hurricane Laughter' hit the air, the crowd finally let loose and the pit came into fruition. Bodies collided as passionate fans clung to every word coming out of Grian Chatten's mouth as if it were gospel. With only a half hour to play, the band offered a relentless set of crowd favourites. 'Big', 'Boys in the Better Land', 'Sha Sha Sha' and 'Too Real' were non-stop powerhouses, showing the band at their absolute best. Their energy was well-controlled as they commanded the sold-out venue in front of them with incredible stage presence and airtight renditions of their biggest hits. Fontaines brought about a much-needed pause with Dogrel closer 'Dublin City Sky', giving everyone the chance to catch their breath as they sang along in unison. They finished off the night with 'Liberty Belle', summoning one last great push of energy before the house lights came back on.

Energy was still buzzing by the time the night was over. It was an exhausting, incredibly rewarding foray into the sounds that make up Ireland's blossoming rock scene.

Learn more about Focus Ireland's impactful work to aid the homeless and those at risk of homelessness here.

WATCH: Fontaines D.C. perform on NPR's Tiny Desk Concert series
The Sultans of Ping are celebrating 30 years of Casual Sex in the Cineplex with a Cork Opera House show
Fontaines D.C. score their first No.1 album in Ireland with Skinty Fia