It's Time For A Weekend Off Football
Emma Starr

Dublin Airport may be a nightmare to negotiate, but when you have a weekend off from the ever-pressing minutiae of top level football in Ireland, you either curl up in a ball – or hit the skies. And I’d found a cheap flight to Milan. Maybe it wasn’t such a good move after all…

Alarm sound. Christ, this was a HUGE mistake. Instant regret. Just like my first time trying Buckfast, I ask myself, “What… is… wrong… with… you?”

Stumbling around in the pitch-black darkness of my TEENY box-room, I scramble to put my two t-shirts, laptop and shorts into a backpack for the weekend. Tripping over the extension cord, there’s a loud “ka-boom” as my Argos space-heater comes crashing down off the miniature side table. The entire building seems to shake. Or maybe it’s just me.

So much for making a smooth exit.

A few days ago, with a free weekend coming up to allow the Irish internationals among us to jet off to play Sweden in the World Cup, the €18 round trip to Milan sounded like a good idea. And I've had a lot of good ideas in my life. Sleeping on an air-mattress in the back of my car in Olympic National Park? Great. Going on a double-black diamond in Switzerland, not having ski-ed for 15 years? Hey ho – perfect! Unintentionally passing the ball to Steph Roche, so she could land a 40-yard screamer? Fantastic.

That was two weeks ago, but it still haunts me. Will for a long time to come, because the goal was so goddam good. Dammit. 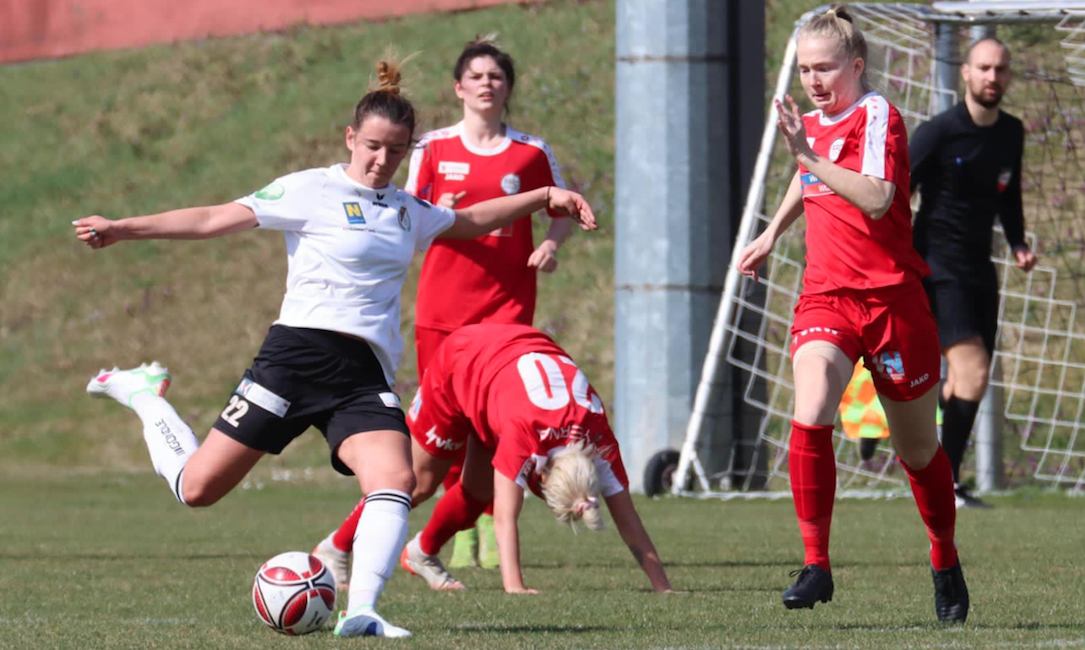 Falling down gets you accepted: that’s me with the No. 20 on my back

STRETCH FOR A TACKLE

My trip to Milan. Considering the cost was the same as the price of a one-way bus trip to Dublin, and €12 less than a carafe of mimosas – that’s prosecco and orange juice in case you’re struggling! – at Dela (...or, er, so I’ve heard), this was a steal. Like the time I finagled an extra trip on my Eurail train pass from Montpellier to Geneva by stowing away in the toilet when the ticket monsters approached, this bargaining-feat ranked highly in terms of things I was proud of in my lifetime.

Sad? Perhaps. But the thought of being whisked away on a shaking tin-can, careening ever onwards, hundreds of miles through the clouds – better known as a Ryanair flight – well, it felt like the perfect getaway.

One can only take so much of the 20-minute rain showers in Galway that, yes, make the grass greener – but also cause you to spend your hard-earned cash on Jergen’s Natural Glow (it’s never natural, ALWAYS orange).

After all, what are you supposed to do on a weekend off footy? Just like when Soupy Norman had its last RTE2 showing, the prospect leaves us wondering what to do with ourselves. Some opt to stay locally, others head home, and people like me seek to take advantage of every free hour.

Time is precious. In a match, every second counts. And trust me, when the ref says ‘5 minutes of extra time’, and the result is in the balance, you can bet every muscle in your legs and every tiny corner of your lungs is going to feel the full 300 seconds. Every heart-bursting run and stretch for a tackle makes time crawl. Ever been to your least favourite aunt’s house for Easter, where the ham is shite, and none of your funny cousins are there? Same thing.

And did you know that, top to tail, a weekend is all of 2880 minutes? Imagine the things you can get up to in that time. You can attend 24 Dua Lipa Concerts, watch Cardboard Gangsters 32 times, or painfully view the McGregor vs. Poirier fight 1152 times.

OR, you can go on Skyscanner and choose a roundtrip flight to anywhere that’s available under 20 quid. Up to you. 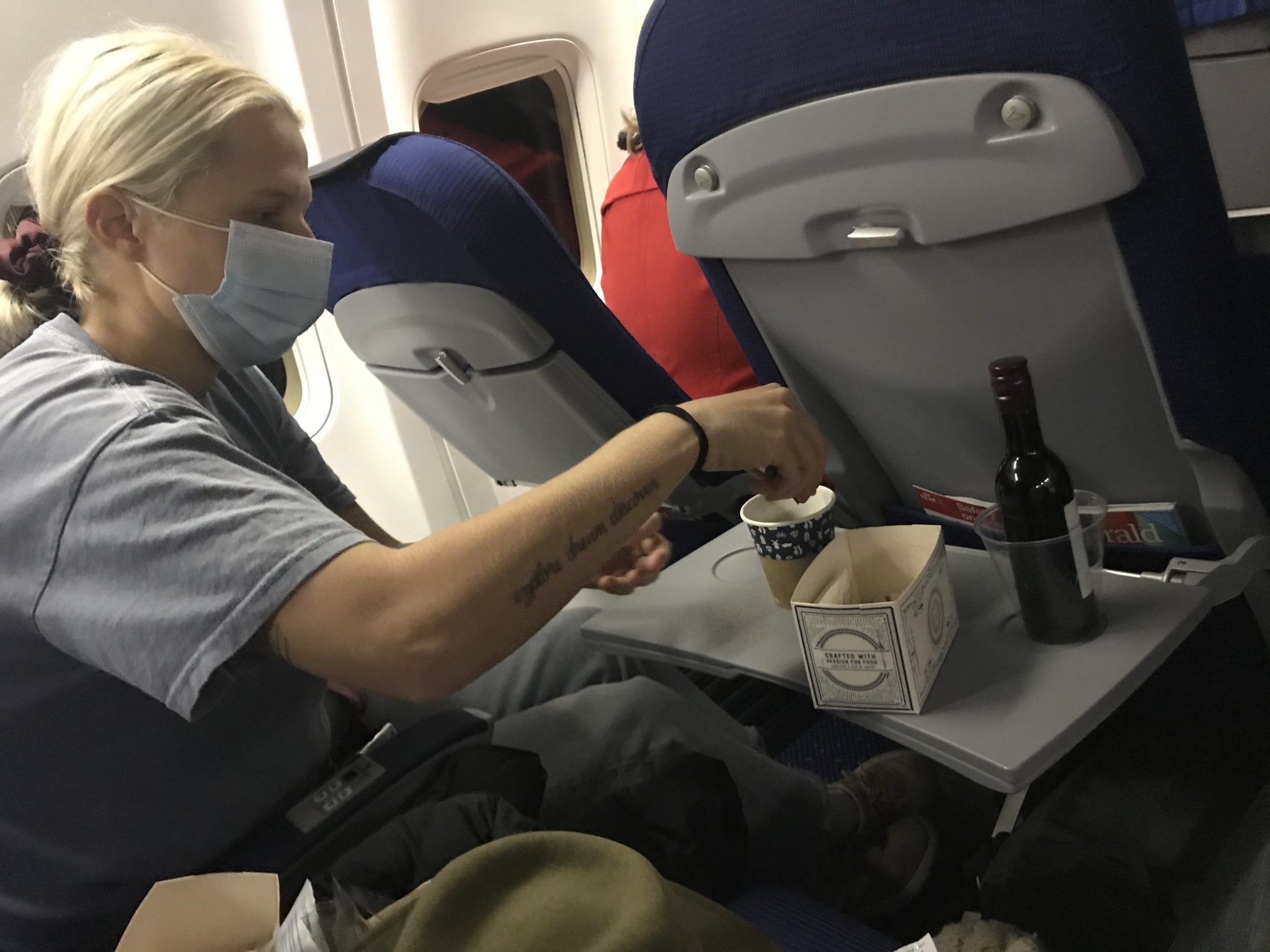 Struggling for leg-room – and a shot of coffee!

Sure, Ryanair seem to have fitted their planes to specifically to accommodate pint-sized children with Yorkshire Terriers’ legs, but there’s something about the bright yellow and blue seats that acts like a clarion call for weekend escapes.

With the insanely stressful 3-hour waiting times at Dublin Airport in recent weeks, a miracle really is needed to make any flight. Sitting on the Citylink bus, I start to feel that there’s a strong chance that I’ve cut this too fine – but last-minute trips, rushing to the bus in the eerie post-pub, pre-work light of Eyre Square, hopping onto the tube at the last second, and renting a car to spontaneously drive to Sheep’s Head are all part of the gig.

The anxiety is building, either from the constant sense of “lateness” in my life or from the strangely strong Americano from the 24-hour Gala.

On the other hand, what fun is to be derived from sitting at home, eating leftover cheesy chips and tapping your toes until the next training session? Living in Europe and being just a half-day trip away from dozens of countries is the stuff us Americans dream of (well, some of us – the rest just dream of perfectly-cooked burgers and the annual trip to Disney World).

There’s something about the freedom and flexibility of being able to close your eyes, point to places in Europe, and buy a round-trip flight. Except to Blackpool. Skip that.

Time to sprint off the bus. Little do these unassuming passengers know I can probably run through the check-in line and security faster than any of them – I mean, the soccer sprints also work for airport queues after all.

All that work does come in handy, and not just when you have to get back to make a defensive tackle. Milan, here I come! 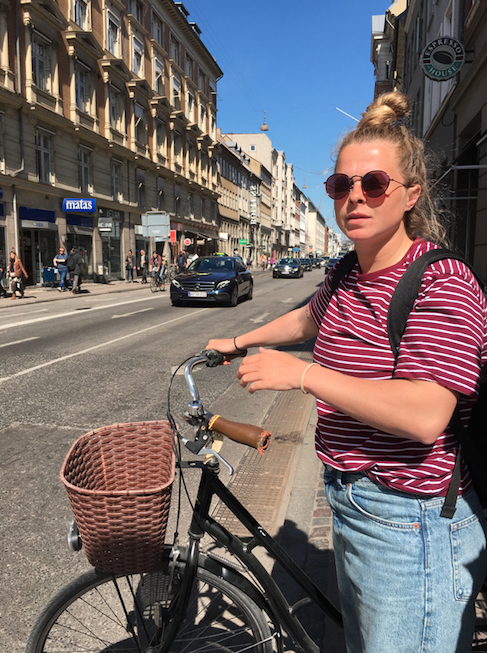 Ireland Has A New Set of Football Heroes – And They’re Women
It's An Away Day, So What Have I Forgotten?
Have Boots, Will Travel
A Weather Warning Has Been Issued
Well, That Was A Dramatic Start To The Season!
You Want To Be A Winner? Consistency is Key