The pressure builds up when you’re on the road. But having seen off ZNK Pomurje in Slovenia, there was an even bigger – literally! – hurdle to be jumped in Iceland. It was bound to be tough, going head-to-head with a team of full-time professionals, but we were up for the battle (even if we were pitted against Vikings!)...

Waking up on Sunday morning, there was a moment when it felt as if we had been in Slovenia for four years. The trip was dragging on – seeing the same people day in and day out, wearing the same clothes, and walking to the same cafe, shop, and mini-golf course to entertain ourselves.

But our bizarre combination of boredom and anxiousness was all put to one side as the big match-day went on. When we play at 7:30pm here in Ireland, the wait-around period becomes insufferable. All you do is rest, eat, rest, eat, and then go to the match.

Although this may sound like the ideal day to most (including me — Starbucks, Netflix, Nando’s, more Netflix), it only adds to the pre-match jitters. It was the same here. Or maybe that was the fourth Slovenian machine latte (had they put something in it?)…

While we were accustomed to this routine after years of doing it with our club teams, this prep was different. This was potentially a deciding match. Lose and it would either be our last Champions League match this year. Maybe even forever, for some players.

We got the job done in Slovenia. Now, the stage was set for round two – another European away-day.

Paired up against an Icelandic giant, Valur, we knew we were in for a physical battle. Watching them the night before on video, you could immediately tell not just their athleticism but the synchronisation they brought to pressing and positioning. They looked like full-time pros – which, of course, they are. In fact the majority of teams that survived their first round games are full-time, dedicating morning, noon, and night to reaching the highest level of football. 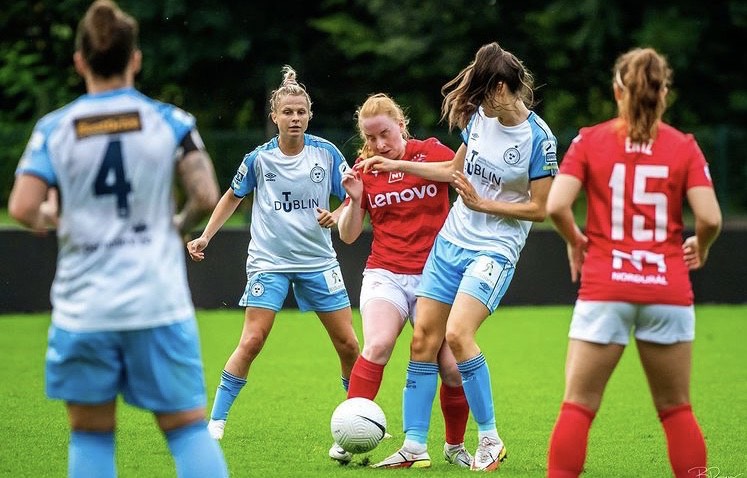 To have won the first match against ZNK Pomurje was a real feat.

The Slovenian team were favourites. They had home advantage. And yet, we de-throned them with a looping header, put away by Heather O’Reilly in the first few minutes the game. Now we were aiming to deliver another shock by beating the girls from the Land of Fire & Ice.

It didn’t help much that we saw them every day for breakfast, lunch and dinner. How would you feel if you saw a 6’7” keeper – Sandra Sigurdardóttir to her parents – walk in every day to get her food, towering over you as you made coffee with the press of a button from the ancient machines? Her hand would have easily wrapped around my throat. An Icelandic international, she could have literally – well, maybe not literally – tossed me aside like an old rag doll, if I got in her way. I mean, I’m sure she’s a very nice girl – but she was bigger than any two of our girls standing on top of each other's shoulders.

There was the rub. Not only did we have to score against a Giant, but the Icelandic team – three current internationals among them – exuded the fitness of a regiment who had trained every single day for the past twelve months and more together. You could tell that these girls run for fun. They’re descended from the Vikings, for God’s sake, so it’s no wonder one stride of theirs equates to about seven of mine. I could see perma-muscles bulging out of their tight-fit shirts, and their quads put Usain Bolt to shame.

That isn’t to say we didn’t give them a run for their money. We did. We we were evenly matched through large stretches of the game, we had our chances – and right up to half-time, one goal at their end could have easily flipped the match on its head for us. Easier said than done when your legs feel like jell-o (or jelly, for every non-American out there) and you are striving to keep up with girls who probably hike 20 kilometres in the pitch-dark during a snowstorm just to get to training. And then run some more.

We had break-away counter-attacks, corners, shots from outside of the box, 1v1s, crosses, and missed volleys. The difference was just in the end-product.

That made the result even harder to take.

As a team that trains three times per week, with girls working all-day, everyday at other jobs, we refused to back down against a fully professional side. Every girl that came onto the pitch – whether for 90 minutes or 10 – gave it their all. We sprinted, chased (...a lot), slide-tackled, headed, and put our bodies on the line for a result that was slowly slipping away.

That’s the beauty, and the cruelty, of Champions League football — if your opponents get a goal or two ahead, the thought that the end is nigh is impossible to shrug off. Unlike a league match, where you can maybe make up for it in the next game, UWCL is unforgiving. If you don’t win both matches in the group stage, you’re out.

The timing of their goals was cruel.

The first half was over – there were 45 minutes on the clock – when Solveig Larsen Johannesdottir scored Valur’s second. The sensible plan was to go out, hold firm and give nothing away for the first ten minutes of the second half.

Sadly even that common-sense approach went out the window immediately when Elisa Vidarsdottir – helped by what from our point of view was a really unlucky deflection – scored their third goal in the first minute of the second half. As a result, we had to try and chase the game for 44 minutes. It was tough. We held our own, but couldn’t get the goal that might have built momentum.

Despite the fact that getting three goals back was becoming less and less plausible with every tick of the clock, this was one of best games I’ve ever played. In terms of heart, desire, and will to win the match, Shelsproved that they – that we! – are second to none.

Valur are a really good side. And still, the 0-3 result was a tough pill to swallow. Even looking back on it from this distance, I know we deserved better. But for the Dubs, and a few stray Americanos like me, the fight and grit that we showed as the clock wound down was special.

We may be a work-in-progress. But the bottom line is that women’s football in Ireland is indeed making progress. I’ll have more to say on that subject very shortly!