Have Boots, Will Travel
Emma Starr

For me, the dream was always that I could forge a professional career playing football. It has been a precarious existence – but I love it, because there is nothing quite like the feeling of being out there on the pitch, making things happen…

Sprinting to the boarding gate, I gazed up at one of the departure boards – the "last call for boarding" announcement for the Milan-bound plane was echoing through the crowded airport.

Actually, the ‘last call’ routing started about 20 minutes earlier, but I was stuck in the security queue at the time, behind some lunatic, who had decided to pack all of the hair care products and lotion in the Neutrogena and Pantene world. As I stood there wondering if my 6-euro seat would still be waiting for me, fear crept into my penny-pinching mind.

What if I missed the flight, and had to get another one? Would my card get declined?

What if I wanted to get a bottle of water on the plane? A coffee (a huge splurge), perhaps? The persistent thought of the dreaded 'Transaction Failed' notice popping up on the card machine was like a recurring nightmare.

So, the real question sprinting down the concourse, is – how did I get here? And will I get there – Milan? Bear with me. It's a long story.

Becoming a professional soccer player after college was always the dream. Not something unattainable like wanting to become an astronaut archaeologist who could fly. A real goal. After all, my entire life had been practices (training), games (matches), and hours-long car rides (drives) to tournaments in other States.

It only seemed natural to continue doing something I loved so much – and that I’d spent my whole life working towards. Plus, I didn't really have any other skills. Actually, I won "Best Speller" in 2nd grade, but I didn't think that being a human Spell Check was a career.

I wasn't exactly in love with the idea of spending 9-5 in an office cubicle; nor of continuing my education for a Master's Degree. I wanted to get out into the real world – though I’m not sure that’s the correct description for playing football either!

I secured an internship at Manchester International Football Academy, which was a good start. My first attempt at actually playing abroad followed – the key word here being "attempt". I did a few months training with Tottenham and Charlton and was offered a spot on both teams. I was living the dream – not! Fast forward 3 months and the first of many visa issues sent me packing (literally) out of the UK.

You'd have thought I’d have learned my lesson. Surprisingly – or maybe not so surprisingly to those who know me – I found myself in the same position again, just a few years later. The good news was that I had signed for Crystal Palace. 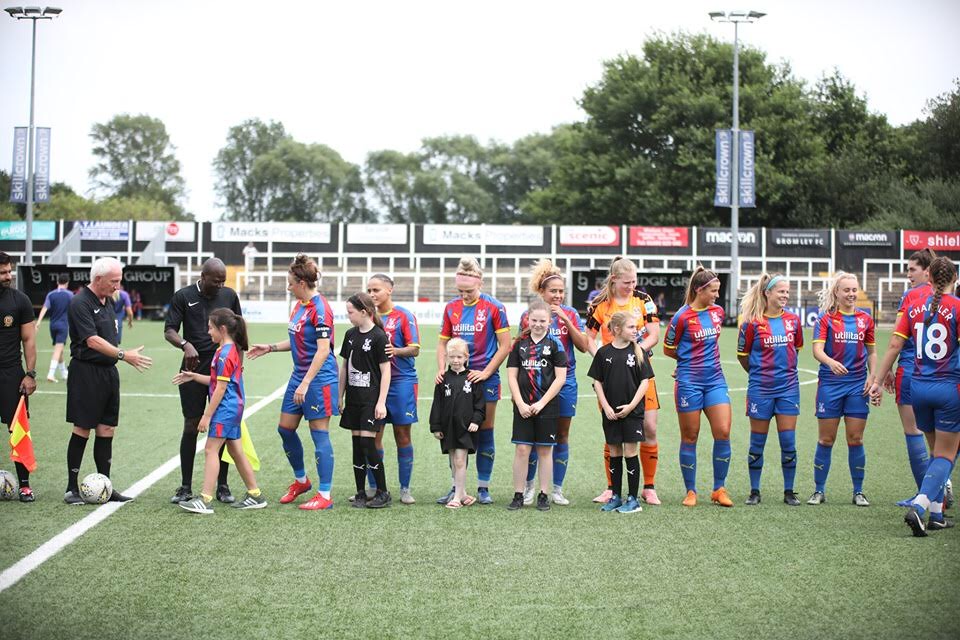 Emma (second from the right, facing camera) lines out for Crystal Palace

After five months, however, I was – as a result of a combination of visa issues, FA regulations, and one broken leg – not quite forcibly deported. Hobbling onto the US-bound plane – and continuing to hobble all the way to the free middle seat in the last row, between a screaming baby and its seemingly-unbothered parent — I wondered if the dream were truly out of reach.

Honestly, trying to find a team, impress coaches, and build up my soccer resume was a constant uphill battle.

Just think about it: every year, thousands of fresh-out-of-college girls in America are looking to continue their playing careers. At this stage, I was 26 years old and had played in three countries without achieving headline-making success. So why would a coach choose me over a sprightly, wide-eyed college graduate?

The thought of packing it in crept up on me. But after a few months of traveling, meeting new people, and clearing my head, I decided that continuing my somewhat up-and-down, topsy-turvy career was the way to go.

Spring 2020. Fresh off the plane in Prague, Czech Republic, I went straight to the first training session. The coach said he was impressed. 24 hours later, a worldwide global pandemic exploded. Deal off.

Now, this might seem a bit self-centred of me, but I couldn't help feeling that the universe was screaming at me, yet again: ‘Honey, it’s time to retire’...

Nope, I wouldn't do it. Stubbornness is arguably one of my best qualities. Just ask my mom – I never did learn how to fold clothes properly. I went back to the States and renewed my ambition the hard way, by getting myself into the best shape I could.

I spent the Summer training and climbing 14,000-foot peaks in Colorado (4,000 meters? Not sure, never was good at math either). And then, a new opportunity landed. Would that it were always so easy: it took just one email, and I decided to pack a small suitcase and head to Vorarlberg, Austria, to join my new team for the Fall (Autumn). 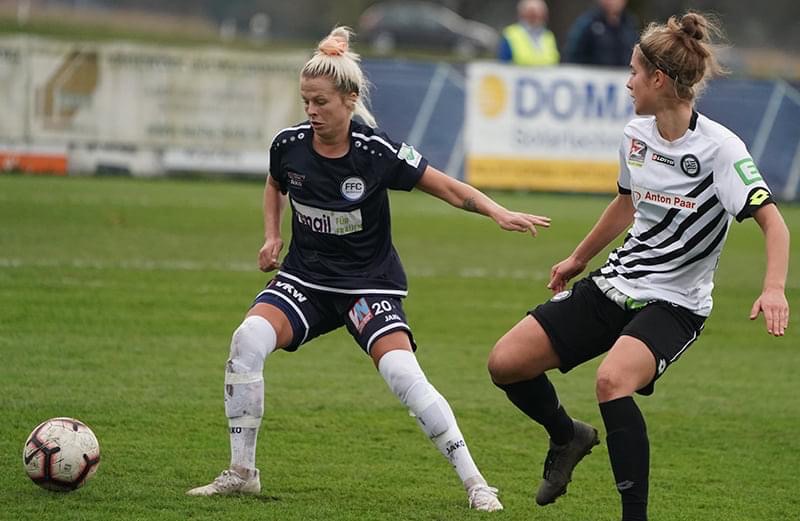 Emma, in action for FFC in Austria

They hadn’t secured a place for me to stay, so I took it upon myself to do that on my own bat. The first month was spent in a nice Austrian lady's spare room at the foot of a mountain. The second and third month, I was in a one-room studio apartment. With accommodation covered and a small stipend per month, this was arguably the best I’d ever done for myself financially.

Now, that might seem like a pretty bleak kind of statement. Enough spending money to just about cover food, and a tiny room to live in, is hardly nirvana. But when your whole 'adult' life has been trying to make ends meet, holding your breath every time you use a credit card that has a $100 limit, and living out of a backpack, the smallest bit of security can feel like you have inked a deal with a Premiership club.

It can also, hopefully, inspire you to play your best soccer… I mean football. Well, we’ll see!

Back in Galway now, the important thing is that the dream continues.

Grinding it out at the weekend, a win against DLR – and the three points that go with it – would have been ideal. Instead we had to do with a 1-1 draw. A feeling of frustration is an understandable response.

Then, I remember the journey it took to get me here, the picturesque EDP stadium, the marvellous feeling of being out there, on the pitch, and the Galway crest on the front of my “jersey” – and it’s everything I’ve ever wanted. 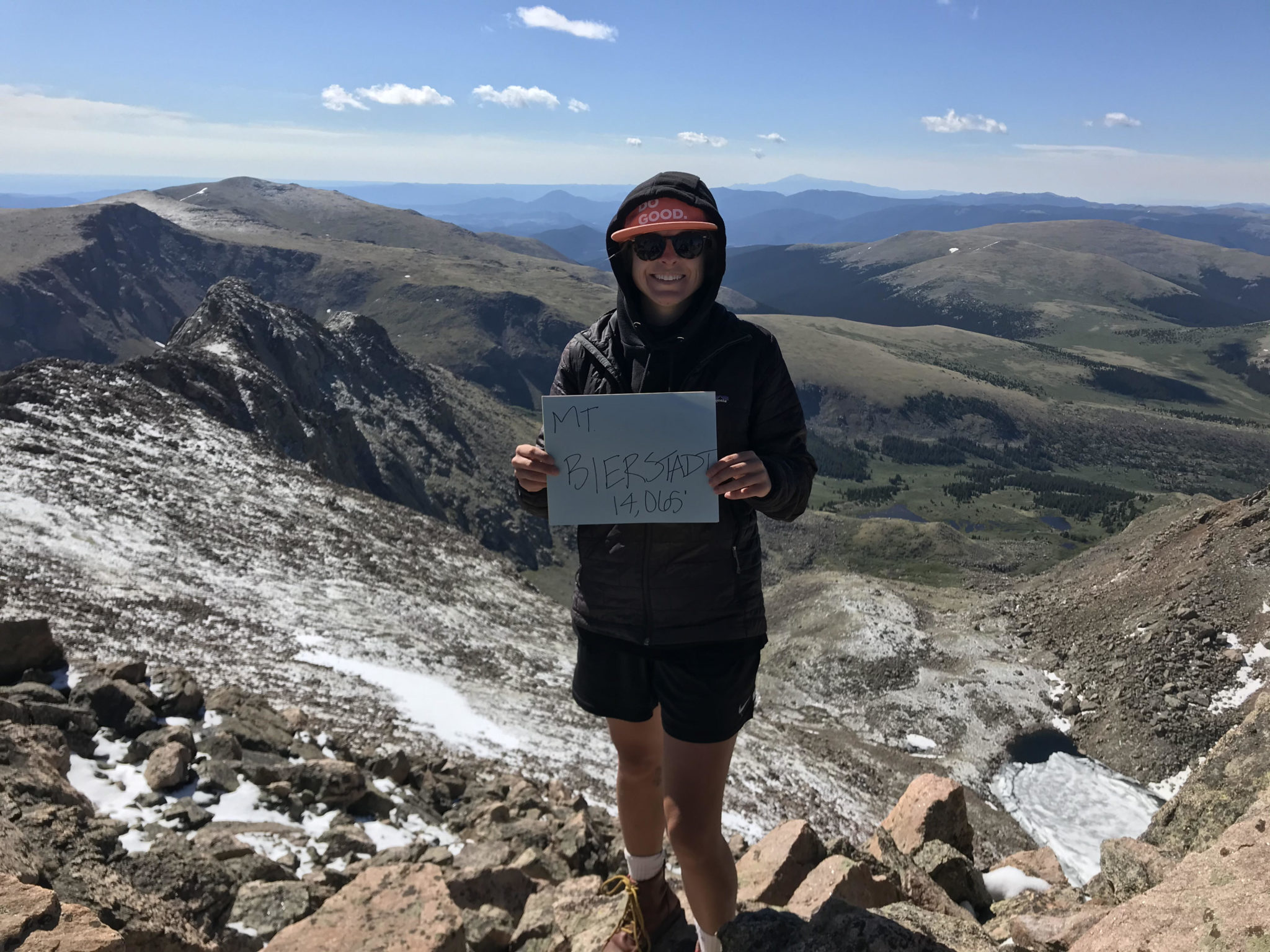 Top of the world, Ma!

• Emma Starr is from Philadelphia in the USA. She completed an internship at the Manchester International Football Academy having graduated from George Mason University, in Fairfax, Virginia, in 2016. She has played football in the UK, the US, Ireland, Denmark and Austria. She joined Galway WFC in 2018 to play professional football, and played for a season with the west-siders. She subsequently signed for FFC Vorderland in Austria and played for a season there, making 17 first-team appearances. She returned to Galway last year, becoming one of the team’s most influential players. She has signed again for the 2022 season. Emma is a journalist and writer as well as a strength and conditioning coach.

Ireland Has A New Set of Football Heroes – And They’re Women
It's Time For A Weekend Off Football
It's An Away Day, So What Have I Forgotten?
A Weather Warning Has Been Issued
Well, That Was A Dramatic Start To The Season!
You Want To Be A Winner? Consistency is Key