Paul Nolan was on-hand as the UK held its first major festival since the pandemic started, with the Chemical Brothers, Damon Albarn, Wolf Alice and Villagers among the multiple highlights.

The pandemic has had many twists and turns, but for your correspondent this is one of the most unexpected yet: many times since attending The 1975’s show in 3Arena almost 18 months ago, I have wondered when I would next get to enjoy live music. Unexpectedly, the answer turned out to be a festival in the English countryside, Latitude, which takes place in the gorgeous Henham Park amidst the rolling Suffolk fields.

Boasting an excellent line-up and a wonderfully relaxed atmosphere, it would have made for a fantastic weekend at any time, but the extra sense of joy and abandon – this being the first major event of its type in the UK since the pandemic began – ultimate made Latitude probably the most enjoyable festival experience I’ve ever had.

Having completed the obligatory Covid test at the site upon arriving on Friday, it’s straight into the action. On the Obelisk Main Stage, Mabel is kickstarting an infectiously upbeat set of feel-good electro-pop. The singer has remarkable stage presence and charisma – indeed, she looks like she’s stepped straight out of a Marvel movie, courtesy of her striking yellow and black clothing and flowing ginger hair.

In terms of the production, the energetic backing dancers and climactic smoke explosions are the coup de grace. If you want a succinct summation of the over-riding sentiment on Friday, it comes courtesy of the next act, Wolf Alice, whose guitarist Joff Odie announces, “We’re out of the fucking house!” Riding high from the recent success of their UK number album, Blue Weekend, the London outfit deliver an immaculate set of dream-pop, shoegaze and thundering rock.

They also have one of the most brilliant front-persons around in Ellie Rowsell, whose sense of nonchalant cool echoes the iconic likes of Debbie Harry and Kim Gordon. Rounding out a cracking first evening are Hot Chip, who have attracted a huge crowd that spills outside the BBC Sounds Stage tent. Electro-pop anthems like ‘Over And Over’ and ‘Ready For The Floor’ predictably go down a storm, but the highlight of the set arrives at the very end. 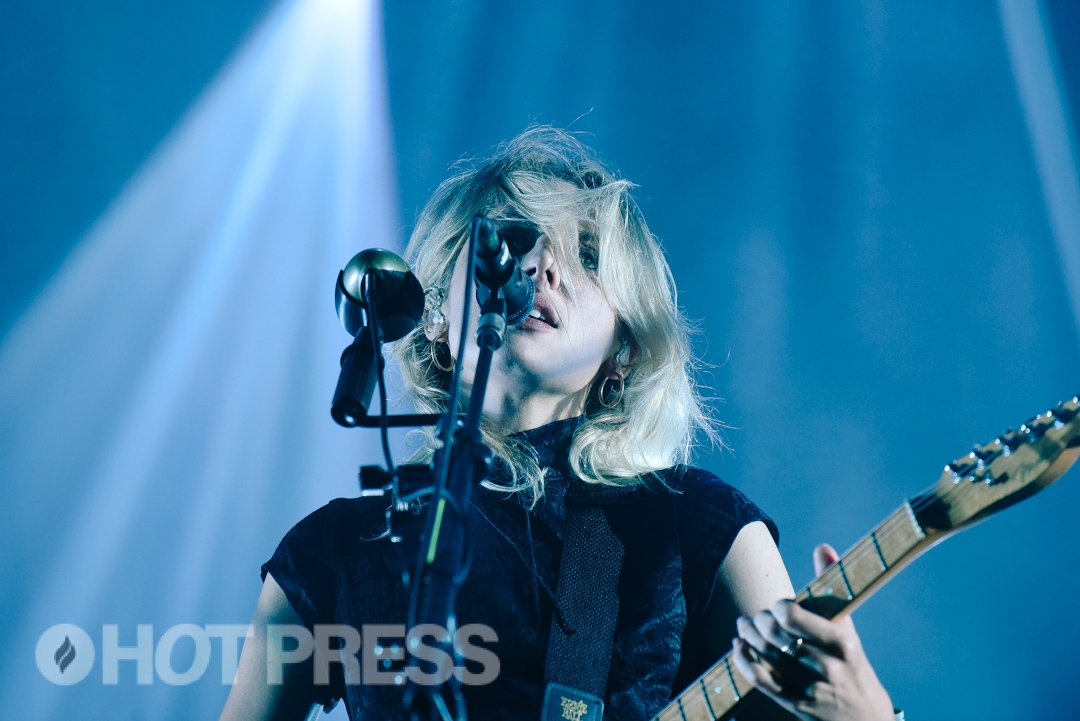 Alexis Taylor and the boys prompt a mass singalong with their euphoric version of Bruce Springsteen’s ‘Dancing In The Dark’, which has an unexpectedly emotional undercurrent, as we all sing our hearts after an unbelievably gruelling and draining year-and-a-half. Afterwards, a sizeable crowd crosses the bridge that divides main arena from the campsite, and there’s a light display over the river – a wonderfully surreal moment that puts me in mind of the hallucinogenic night sequences in Apocalypse Now. Oh what a perfect day…

The glorious sunshine of Saturday afternoon brings with it a chance to properly check out the site. Latitude has a similar vibe to Electric Picnic, with a diverse array of family-friendly attractions on offer, including entertainment, food, chill-out areas and sundry activities – even swimming in the river for those who are so inclined.

One of festival’s true gems is the Sunrise Arena, a gorgeous spot tucked away in the woods. It turns out the be the perfect place to relax on the grass and enjoy the performances of a brace of Irish acts: singer-songwriter CMAT and rising indie-pop star Orla Gartland. Both acts deliver polished sets that go over very well with enthusiastic crowds.

A bit later, meanwhile, Villagers arrive on the BBC Sounds Stage, with Conor O’Brien in informing us that “we still smell of Ryanair”. Not to matter – the performance turns out be a powerful testament to O’Brien’s gifts as a songwriter and melodist, and the group further flex their muscles with some experimental flourishes that recall the eerie majesty of Radiohead.

Taken together with the one-two punch of CMAT and Orla Gartland, this trio of performances shows that Irish acts of many styles continue to resonate hugely with UK audiences. Elsewhere, early afternoon highlights included a couple of new discoveries for your correspondent, quirky art-rockers Los Bitchos and dance-punk merchants Bad Sounds, as well as Supergrass, whose mix of indie anthems and moody psychedelia is a potent reminder that they were one of the true Britpop heavyweights.

Speaking of which, it’s now time to head riverside to check out a special set by one Damon Albarn, who will perform with his band on a stage built on the water. As the anticipation builds, you are again reminded of the how great the atmosphere is, a factor which really makes the festival – though there is a sizeable crowd on the riverbanks, the bridge and the hill overlooking the stage, everyone remains considerate of each other, keen that their fellow festival-goers enjoy the performance as much as they do.

Albarn has elected to go full Spinal Tap and quite literally push the boat out: he and the band are conveyed to the stage via gondola, which has to rank among the more memorable rock entrances. Albarn delivers a characteristically eclectic set drawing from all stages of his remarkable career, with the icing on the cake being the closing version of the Blur classic ‘This Is A Low’ as dusk falls. “See y’all again real soon!” concludes Albarn.

For me, it was far sooner than I anticipated: I almost literally run into the singer on the far side of the river, before a steward halts me and Albarn is led through by security. Oddly, a group of us end up walking behind him up to the main arena. Perhaps appropriately, a light fog is drifting in from the river – this is quite literally the frontman of Gorillaz in the mist.

More and more people follow the singer until he has become the pied piper of Latitude. A number of fans rush forward to try and get a word, but alas, the security guards usher Albarn backstage, where he climbs aboard a waiting van and disappears into the Suffolk night. When he walked by me earlier, I’d frantically tried to take a pic – perhaps inevitably, it turned out a blur. 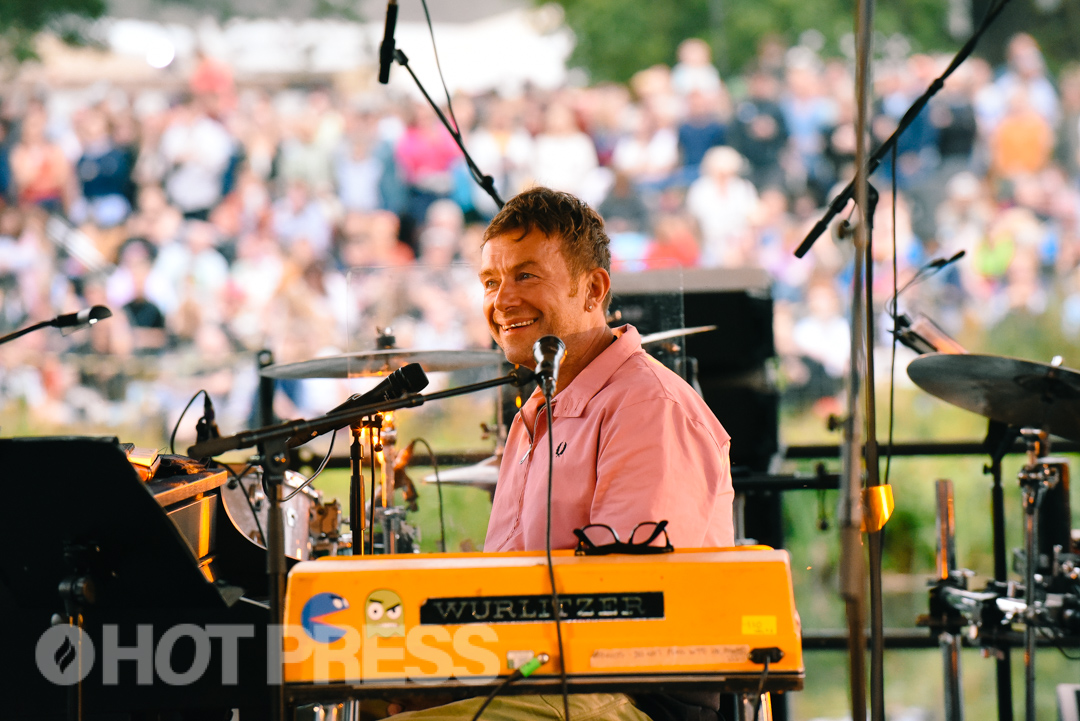 We may not have got to hear ‘Girls & Boys’, but the Chemical Brothers compensate by commencing their headlining slot with ‘Hey Boy Hey Girl’. Elsewhere, ‘Block Rockin’ Beats’, ‘Star Guitar’ and a truly sublime ‘Swoon’ are also among the highlights. Indeed, aided by pristine sound and awesome trippy visuals, the Chemical Brothers deliver a magnificent set that is the talk of the campsite the morning after – many are describing it as one of the best festival headlining performances they’ve ever seen.

After the brilliant techno-punk set in the BBC Sounds tent by Sleaford Mods – who give a loving shout-out to Fontaines D.C., who they replaced as headliners at the 11th hour due to a positive Covid test – and some raving at the Sunrise Stage, it’s time to call it a night, or rather, early morning.

Hot Press is only around until the evening on Sunday, but highlights we caught included comedian Bill Bailey’s car-horn aided take on Metallica’s ‘Enter Sandman’; classic indie-dance from Tim Burgess; and the main stage set by Rick Astley, who proved himself to be a pretty fantastic pop performer.

While it would be great to stay a little longer, you know the rules and so do I: all good things come to an end, and so it’s time to hit road and make the journey to Stansted. We’re certainly tired after a hectic weekend, but as Jarvis Cocker once said, it was one hell of a party.

How Graduates Can Travel and Realise Professional Goals With Jameson
Hot for 2023 - Film Preview: Oppenheimer, Women Talking and more
National Women's Council call for abortion review findings to be published "without delay"
Gardaí confirm Finglas sexual assault suspect to be a white Irish male following racist demonstrations
Beyoncé yet to announce Irish shows on Renaissance world tour
With A World Cup Looming, Women’s Football In Ireland Is On The Rise