Arthouse 2021: The annual fundraising auction for Outhouse takes place this weekend
A large-scale film contact sheet of Panti Bliss from an early 2000s photo session for an Alternative Miss Ireland poster, taken and donated for auction by Conor Horgan.

Running for the second year in a row, Arthouse will run over November 20th and 21st and features work from some of Ireland's most talented artists.

Ireland’s LGBT community centre Outhouse are gearing up for their annual online art auction, taking place online across this weekend.

Featuring paintings, print, textiles, photography and sculpture from genres such as street, abstract and figurative art and presenting over 200 artworks from over 160 of Ireland’s top artists, Arthouse 2021 is a chance to own unique pieces of art with something for all tastes and pockets.

Arthouse 2021 is a timed online auction and will be hosted on Outhouse’s website. The auction is now online for advance bidding and will start closing in lot order at 3pm on November 20th and November 21st, 2021. You can bid right up until the final lot closes. More detailed information on how to bid is available at outhouse.ie.

Last year’s auction, their first ever, raised €54,000 which was crucial in Outhouse reopening its doors this year after over 20 months of closure due to the pandemic.

Some treasured and rare LGBT+ related works have been donated this year. Conor Horgan, the filmmaker behind The Queen of Ireland, a documentary about Irish national treasure Panti Bliss in the run-up to the marriage equality referendum, has donated a large-scale blow-up of a film contact sheet of Panti from a photo session for an Alternative Miss Ireland poster in the early 2000's. Niall Sweeney, whose recent outdoor exhibition in IMMA was a resounding success during the pandemic restrictions, has also donated two rare poster prints he designed for Alternative Miss Ireland in 2005 and 2012. 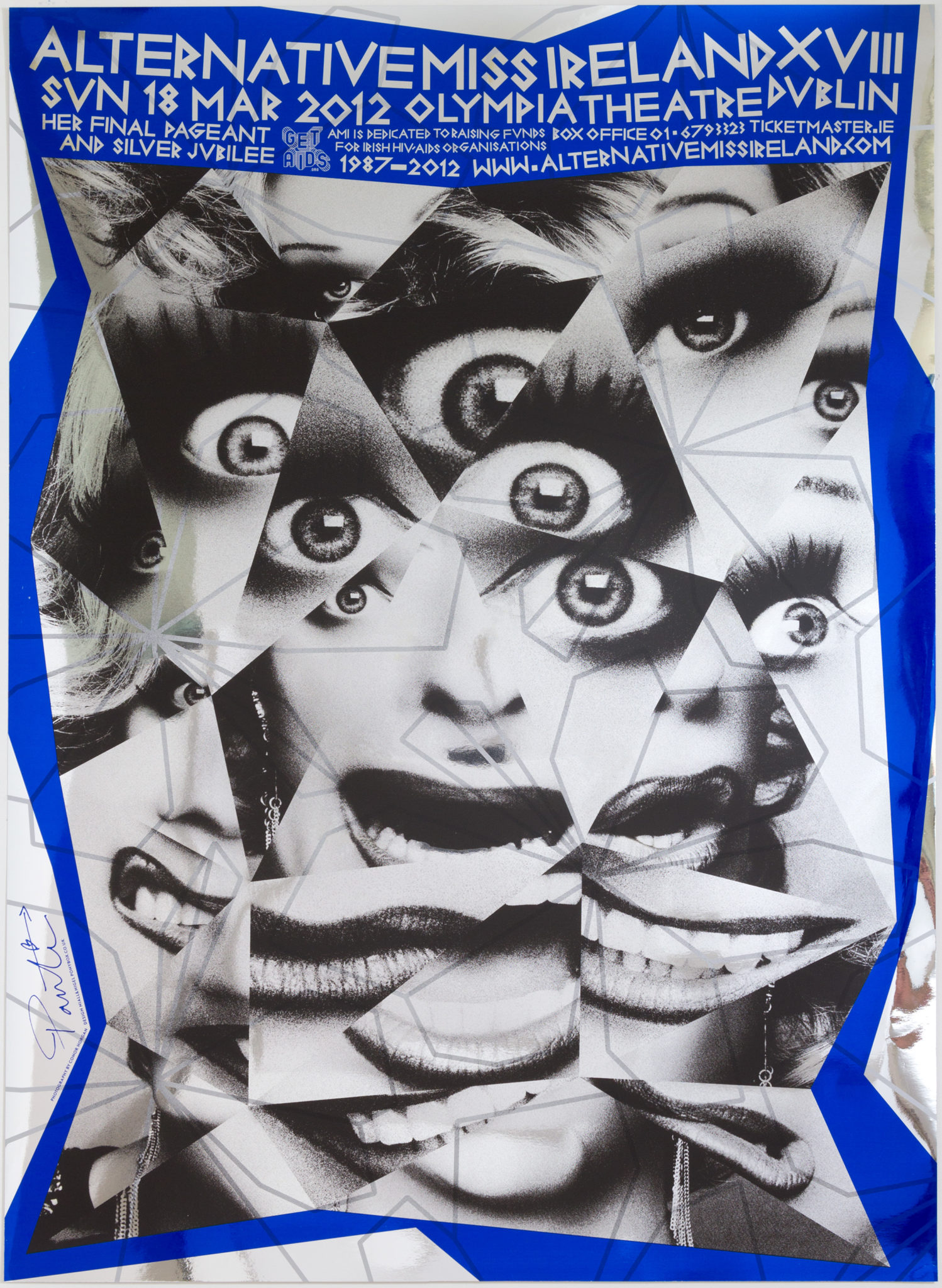 The only full time LGBTQIA+ centre in Ireland, Outhouse opened in 1997 on South William Street before moving to its current location at 105 Capel Street. In those years, it has been a place for LGBT+ people to come in and feel safe, meet people and access resources in a positive and protected environment.

"Through the incredible support we received from Artists, our community and everybody who bought a piece of art, Outhouse was able to reopen the building in August 2021 but the effects of Covid-19 still linger," David Hand, Operations Manager in Outhouse said.

"The restrictions we need to impose to safely reopen has severe limitations on what income we can generate through our social enterprise. To that end we are now looking forward to our second ever Arthouse auction on the 20th and 21st November. Everything that is raised from Arthouse goes back into the centre and supports the work we do. It will allow Outhouse to continue to be a safe space at the centre of the LGBTQIA+ community that everybody can be proud of and make use of."

Queen of Ireland and long time LGBT activist, Panti Bliss also commented on Arthouse and Outhouse, saying "Outhouse is a community centre in the very truest sense. It is of, by, and for, the community. And a place where countless LGBT+ people first found community."

"I'm always delighted to be able to lend my support in any way I can to fundraising efforts, and auction is a fantastic idea because you can support Outhouse to continue its great work while also getting a fabulous art work by one of the many and varied artists who are contributing pieces. Though my totally unbiased advise is to buy one of the TWO portraits of me by Conor Horgan and Niall Sweeney that are tucked in among the lots. They'll be very valuable after I'm dead!"

Arthouse 2021 is now online for advance bidding and the auction will start closing in real time and in lot order at 3pm GMT on November 20th and November 21st, 2021. Place your bids here at outhouse.ie.