Tori Amos: "You write about things that are difficult to cope with... Sometimes that's the way of healing"
Credit: Desmond Murray

When the first lockdown hit, it felt almost like the end of the world. Things changed dramatically for the better, however, when Tori Amos set about making a new record. Here, the artist discusses her Hot Press Lockdown Album of the Year, Ocean To Ocean, her mother’s death, the aftermath of rape – and recording the classic Boys for Pele in Co. Wicklow.

The Cornflake Girl was already in troubled waters when she initially sat down at the piano to begin work on her 16th album, Ocean To Ocean. The Black Dog had pounced. and wouldn't let go, no matter how hard the fiery, flame­ haired songstress tried to wrestle herself free from its dark grip.

In May 2019 , Tori was still trying to get to grips with the passing of her mother, at the grand old age of 90. Then the entire world was plunged into a terrifying tailspin with the arrival of Covid. It was like a double whammy and she was sent reeling. Many months later, she finally saw light at the end of the tunnel. Once she started to work on it, the songs on Ocean To Ocean came pouring out of her.

"I find it difficult to explain if somebody hasn't gone through that," she reflects on the impact of her mother's death. "I would empathise with people, I could hear something in their voice - but I didn't understand when I had both my parents with me."

She sings about a hopeless feeling of"emptiness" on the track 'Speaking To Trees', adding: “Since you left/ I’ve been hiding your ashes under the treehouse/ Don’t be surprised/ I cannot let you go.”

“I didn't understand that type of grief," Tori continues. "and how it happens in waves and comes and goes, and comes back again. And just when you think you're our of the woods, somehow you find yourself not being able to pick up the phone and talk to them. It's a weird feeling. And I also think it's the march of time, isn't it? You've realised they're not on this 'earth plane' anymore. On the third lockdown here, I kind of lost the plot. I just thought, 'When is this nightmare going to end?"'

Tori wanted to hide away under her duvet. She was eventually snapped out of it by her own 21-year-old daughter Natashya Loren Hawley, who has appeared on her last four albums.

"Finally, my daughter came in and just said, 'Look, I miss grandma. And I know you miss your mom, but I need my mom. I need her back. So whatever you've done with her, I need my mom'. Wow! Talk about a bucket of cold water, almost literally feeling like I've just been doused in it.

"I was fighting this monster sadness, or despondency, or whatever you want to call it. And so I started looking up fighters like Bruce Lee, thinking I was going to get some fighting tips - the key that unlocked everything."

Amos' fiery inner voice eventually bubbled to the surface, telling her: "Be like Bruce Lee, be like water." She knew she was on the right track when she wrote the first song, 'Metal Wood Water' and those waves of melancholy started to subside.

"New songs started to come," the singer reflects. "The music basically said, 'Write from where you are, and if you're in the mud and in the muck, come from that place'. And so that's really where the song 'Metal Water Wood' began to come and find me. It pulled me out of that place."

Against all the odds, the crisis Tori Amos had to endure resulted in an album that - with its visceral thematic and lyrical vibe - feels something of an older and wiser spiritual sister to the artist's first two seminal records, 1992's Little Earthquakes and ’94’s Under The Pink. “This record," Tori says, "is about loss and how you cope with it."

The recording sessions sound like they were akin to therapy sessions.

"I guess," she replies. "I've had therapy, and I find it a very different experience than writing. The outcome is that it can shake me out of a dark place, writing songs. But it can also take me to those places that I've been avoiding - and that I can't avoid anymore, because they're in my shadow.

"They're in my blind spot and they're stalking me. And sometimes I feel, as writers, we have to face some of those experiences we don't want to face. But that's our calling. I went through it (therapy), I guess, from about '96/'97 to 2005. I'm glad I did. It gave me some tools in order just to deal with the day-to-day that we all deal with."

Being something of a spirited vagabond at heart - she loves touring - it felt like one of Tori's limbs had been chopped off when live gigs came to a screeching halt. It will be a a son of homecoming in more ways than one, when she performs at the Cork Opera House on St Patrick's Day. She has always had a real grá for Ireland, which was her home from home for the guts of 25 years. Tori reluctantly sold her spiritual retreat in Kinsale shortly before the pandemic kicked off, due to "family circumstances".

"It's not a chore for me playing live," she says now, "it's a privilege: it's an energy, being collaborative with an audience and having that exchange. Ir's really like a certain type of voltage that I don't get in any other way. So that nor being there, my mom having ... I started really feeling her loss: it crashed in at the same time." 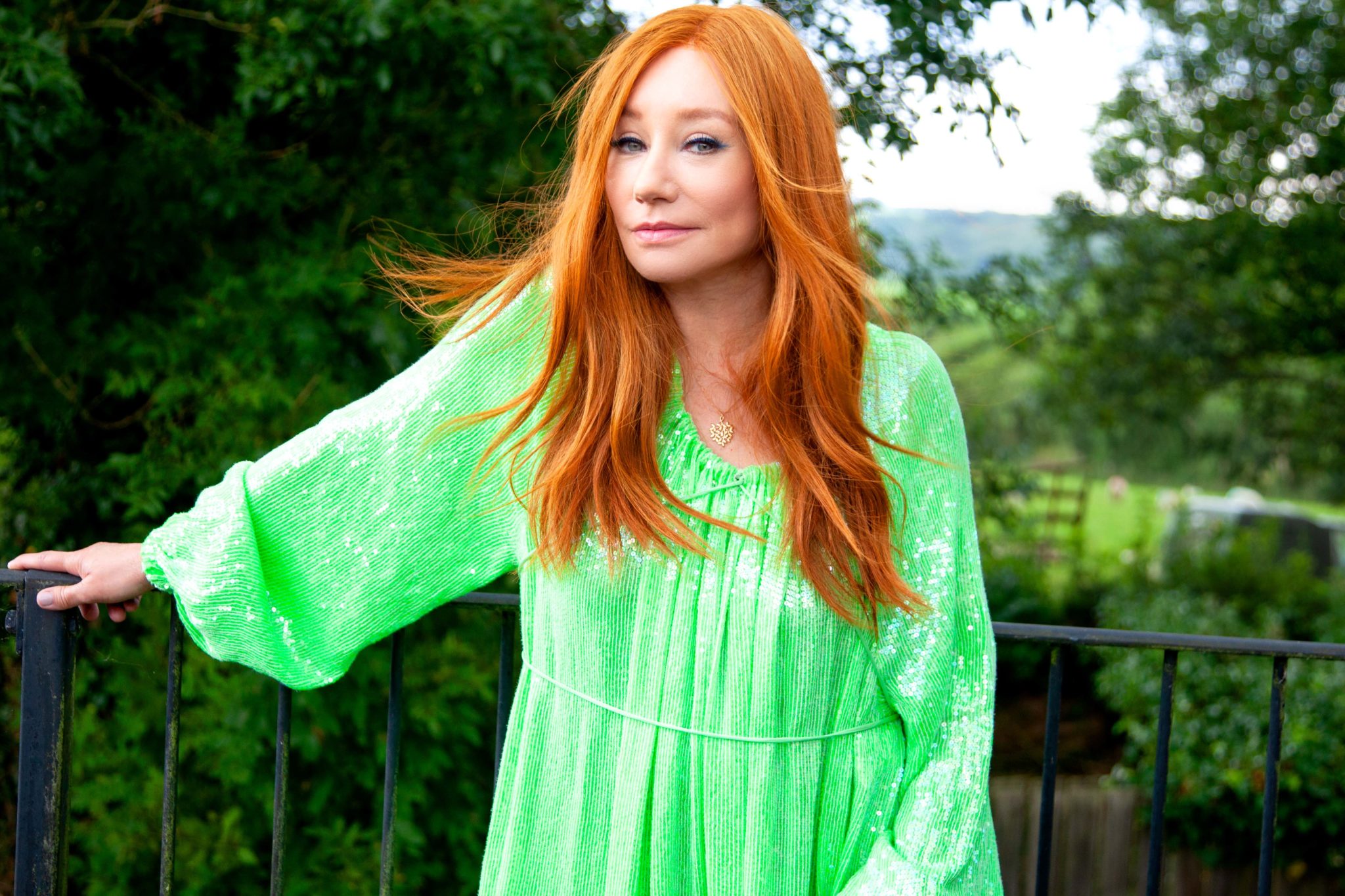 Tori was a child piano prodigy. She started playing from the moment she could reach the keyboard on the piano at home, She won a scholarship at the age of five - though that was withdrawn when she was 11, for "musical insubordination."

She has been performing live since the age of 13. Tori's father Edison - a Methodist minister - used to chaperone his daughter to her early gigs in gay bars. Her father is long retired now and living out his twilight years in Florida, but it must've been a surreal scene being accompanied by a genuine man of the cloth in a gay bar?

"The gay guys would come up to me and say, 'ls he dressed in costume?"' she recalls. "And you have to think, 'No, he's not in a costume. My dad is a Minister!' And then - after the shock of that - they'd go over and talk to him. And my father took a lot of criticism and ridicule from the Church, from the parish, for taking me. And I just remember him saying, 'The safest place for a 13-year-old girl is in a gay bar'."

Did Tori ever have any conversations with her parents about the blasphemous lyrics on her song 'Icicle' from Under The Pink? In it she eloquently sings about the desire to "take" from her own body instead of the Eucharist at Easter time. She then leaves nothing to the imagination with the next line about “Getting off while they’re all downstairs singing prayers.”

“To be honest with you, no," Amos responds. "I think it was just safer for everybody to not investigate that. But people who come to the shows have observations about the songs, and they're usually spot-on."

There's also a line in 'Icicle' about how “the good book is missing some pages.” When did Tori start to get turned off by religion?

"It was a gradual turning away," she considers. "The more that I studied mythology and archetypes, and different perspectives, I started to find Jesus outside the Church, not in the Church anymore. That was just my experience, I found a lot of hypocrisy in the Church. I'm not saying everybody has that experience."

Tori had also experienced her own dance with the devil, when she was recording her third album, 1995's Boys For Pele.

“Well , I've met some baby demons in my life, that's for sure," she says. "There was a moment I thought I had a conversation with he who called himself Lucifer the Light Burner. I found that an interesting conversation, but I was three sheets to the wind on magic mushrooms (laughs).”

There's even a track on Boys For Pele - recorded in an 18th century church in Delgany, Co Wicklow - called 'Father Lucifer'. Very much an underrated album, its qualities were drowned out at the time by the controversy surrounding the artwork, which featured a piglet suckling on Tori's left breast.

"Maybe - who knows?" she answers. "l didn't explain it very well at the time. But that whole record was dealing with the patriarchy, and misogyny, and justice: the place that some men and women held women, and how they viewed our place in society.

"So I felt there was something of a Christmas card in my Madonna and child image, of a woman nursing that which is seen as not kosher back into the spiritual fold, as it were. So, yeah, it was a kind of Christmas card to all my Christian friends. My dad wasn't a big fan of the picture."

Tori says her main goal, with all sixteen of her albums, has always been about "trying to document a time through song." Having frequently worn her heart on her sleeve, the singer was certainly ahead of her time on those first three albums, when she addressed feminism and sexuality in a very forthright fashion.

Amos was also something of an early harbinger to the #Me Too movement, when she sang about her own harrowing ordeal of being raped on the powerful a cappella ‘Me And A Gun’. On her new record, she is again reflecting on sexual assault in the poignant '29 Years', which is easily good enough to slot onto her next Greatest Hits package. I wondered was addressing her attacker?

"No, it's not about me addressing anybody but me, and how I think the damage of a sexual assault affects your life, and how it can affect your relationships with people, your friendships, your family, how you deal and cope with things in general.

"I had the time in lockdown to just go over the last 29 years and think about what I've learned. And also that, 'I don't want to keep living from my damaged place. I don't want to stay in victim consciousness'. I've been fighting that monster for a long time, but it's something that I have to remind myself: 'Before you respond to this - whatever's happening in your life - you need to think this through. You need to think about how you want to respond'.

There's much deep reflection on Ocean To Ocean. Does Tori have a favourite song.

"Songs won't forgive me if I pick one over the other," she says. "It's always been like that - I can't really choose one or the other. I won't get a minute's peace."

Ocean To Ocean is out now via Decca Records.