The Ukranian Ambassador to Ireland, Larysa Gerasko, was among the speakers at a rally outside the GPO, at which Russian aggression was roundly condemned... Report and pix by Noah Katz.

A major rally against the war being waged by Russia in Ukraine took place in O’Connell Street, in the centre of Dublin, today. The Russian President, Vladimir Putin, was a particular target for criticism, following the outrageous bombardment of towns and cities in Ukraine this week.

A large crowd of several thousand gathered in front of the GPO building and spread across the width of O’Connell Street. There was a notable Garda presence around the area, but the rally remained peaceful, as speakers spoke passionately against the barbarism of Russia’s attack on a sovereign nation.

Many parents in the crowd had brought their young children to the event with them.

The crowd regularly broke into chants, which reverberated across the historic street, where the Proclamation of the Irish Republic was read by the rebels in 1916 – in the first key act that ultimately led to Ireland breaking free of British over-lordship. The parallels with the battle that Ukranians are currently fighting were unmistakable.

“STOP WAR NOW," the crowd chanted. “STAND WITH UKRAINE," “SHELTER OUR SKIES,” “NO FLY ZONE,” and “WE ARE ALL UKRAINE.”

The President of Ukrains, Volodymyr Zelenskiy, has asked NATO to impose a “No Fly” zone over Ukraine, to limit Russia’s air bombardment. However, so far NATO has refused the request on the basis that it would likely turn what is currently a local war into a catastrophe that would engulf the whole world.

Among those who spoke at the rally was the Ukranian Ambassador to Ireland, Larysa Gerasko, who told of how her country is on the brink of a humanitarian catastrophe.

“Many cities in Ukraine are destroyed,” she said. "Many civilians are killed. Many children, women. Many Ukrainians flee the country."

"Many refugees,” she added.

“My dear brothers and sisters,” he said, "from Ireland, from Ukraine, from many many other countries who stand here today, today, I am the Lithuanian ambassador to Ireland but feel Ukrainian. My heart is bleeding the same way as many of the people in Ukraine. I really believe that the people of Ukraine are the real heroes of Europe today.”

The Polish ambassador to Ireland, Anna Sochańska, spoke of the welcome afforded to Ukanians fleeing the devastation.

“My presence here is living evidence of the love, compassion, and solidarity of all the Polish people,” she said. "As you know we immediately opened our border to all the refugees. We are open to Africa, Asia and anyone who needs help. I also want to say that Putin knows he cannot win this war. We are all Ukranians.”

Also among the speakers was Fr. Fergal MacDonagh, a Catholic priest who recently threw red paint on the Russian embassy, at its address on Orwell Road, in South Dublin. Since then, various graffiti have been painted around the gates – including red swastikas, the word “Nazis" and the sentiments ”blood on your hands” and “Fuck Russia."

“It’s appalling,” the priest said of the scale and brutality of the Russian attack on Ukraine, with civilians – including women and children – being targeted and buildings levelled. “It’s horrific. It’s the work of evil. It's a war crime.” 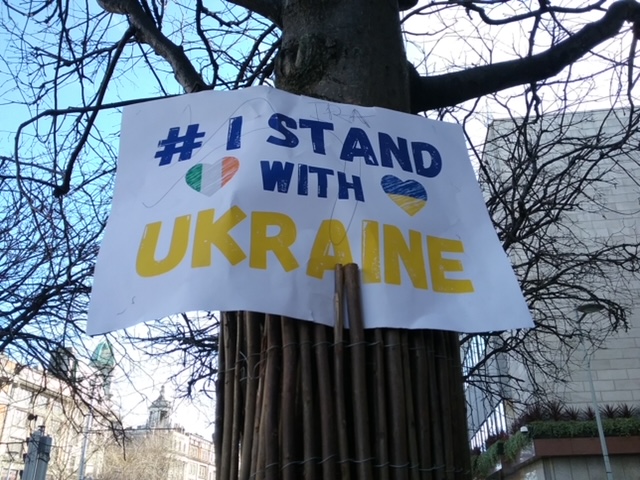 "My relatives, my classmates, my family they are all being bombed with rockets," she said, in what was one of the most moving testimonies on an emotional occasion. "The house that I lived in in Kyiv it's being shelled by rockets continuously, it's a nightmare. The main point is close the skies, close the skies over Ukraine and Ukraine will do the rest – they will win it."

There were reports this morning that, in an interview in the Russia 24 station, the Russian ambassador to Ireland Yuriy Filayov had claimed that Ireland is at the head of anti-Russian protests in the European Union

Several times the Ukrainian National Anthem – "Shche ne vmerla Ukrainy i slava, i volia” ('Glory and freedom of Ukraine has not yet perished') – was sung spontaneously by the crowd.

The organisers encouraged everyone to go to http://iamukrainian.ie to donate to help those who are struggling in Ukraine. 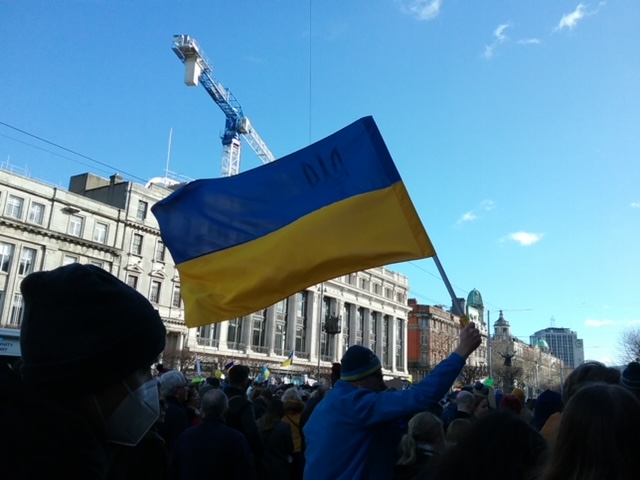