As they unleash their powerful second album, Supernova, Amy Love and Georgia South of Nova Twins discuss championing underrepresented voices in rock – and how political unrest, Gen Z, and TikTok are sparking a major resurgence in heavy music.

Loudly rejecting the industry’s prevailing pigeonholes and established norms is a bold move for an emerging act – and that's something Nova Twins know better than most. But since the release of their debut single, ‘Bassline Bitch’, in 2015, the English duo have held fast to their principles, ensuring that this rebellious ethos has remained inextricably interwoven into their defiantly raucous, alt rock sound.

Now it looks like that resolve is paying off, as the pair garner headlines and glowing reviews in equal measure, while continuing to challenge the status quo of a modern rock scene that’s long been dominated by white men. In fact, following the release of their 2020 debut album, Who Are The Girls?, and tours with the likes of Prophets Of Rage, Bring Me The Horizon, Wolf Alice and Sleaford Mods, the band are poised for a major international breakthrough, with the arrival of their second album, Supernova, this month.

Nova Twins – made up of singer/guitarist Amy Love and bassist Georgia South – tell me that they haven’t had much time for pre-release nerves, however, having spent the majority of the year on the road, including a gig at Whelan’s in Dublin back in March. At the time of our conversation, they’re backstage in Milan, in the middle of their run as special guests on Yungblud’s tour, which concluded with another trip to Dublin, at the 3Arena, on June 10.

Like Yungblud, Nova Twins arrived on the scene with a unique style and an uncompromising vision – something that some people in the industry were initially wary of, they say.

“When we first came out, it was like, ‘What do we do with this? Where do we put it?’” Amy recalls. “But people are starting to learn that rock and alternative music can come in a lot of different shapes, forms, sizes, and appearances. People are a bit more accepting now.”

Although Amy and Georgia bonded over ‘90s R&B growing up, the rock scene is where they ultimately found a deep connection – cutting their teeth in various bands before coming together as Nova Twins. While they’ve never been ones to conform to trends, they’re both happy to see heavy music having a major moment around the world right now.

“It’s really been led by Gen Z and TikTok,” Georgia points out. “They’re taking charge of what they want to hear – they’re not waiting to be spoon-fed by the labels. They’re like, ‘We’ve found this band. We’re going to back them and make them the biggest band ever!’ So you see these bands blowing up on TikTok now. It’s cool to see that women are at the forefront of this new wave of rock, metal and alt as well. So many of them are killing it right now.”

“There’s so much political unrest that’s been going around as well with Black Lives Matter, and the #MeToo movement, and a lot of things that people are upset about,” Amy adds. “That creates the perfect atmosphere for an angrier tone, which is obviously what rock and punk music thrives in.”

Having toured the U.S., they’re also horrified by abortion rights coming under threat in the country if Roe v. Wade is overturned.

“It’s just a scary place in general,” Amy sighs. “It’s horrible that all these men think that they have a say over our bodies, and what we can and can’t do. They have no idea about the implications. They’re pro-life for this but they’re not pro-life for anything else. It’s whatever suits them.”

At certain moments, Supernova feels like a call to arms with album highlight ‘Antagonist’ opening with the lines: “I’m feeling like a riot / If it’s a cure to the cause, then we have to get violent.”

“We were very much writing in the moment,” Amy explains. “It was relevant to our surroundings and what was going on in our lives. We took each day as it came, and it got us through that lockdown – it gave us a focus. It got to a point where we started appreciating the time in lockdown, to be able to write our album so freely.”

Over the pandemic, Nova Twins also kept busy curating a playlist showcasing artists of colour from the worlds of rock, punk and alternative music, which eventually grew into last year’s charity compilation album, Voices For The Unheard. As two mixed race women, who have been historically underrepresented in rock – despite the role of Black women like Sister Rosetta Tharpe in paving the way for the genre – the project was particularly important.

“In Toronto, we met someone who was on the playlist,” Georgia says of Voices For The Unheard. “And they said they got a publisher from being heard on there. So it’s great that the industry is looking to the playlist to discover new music as well.” 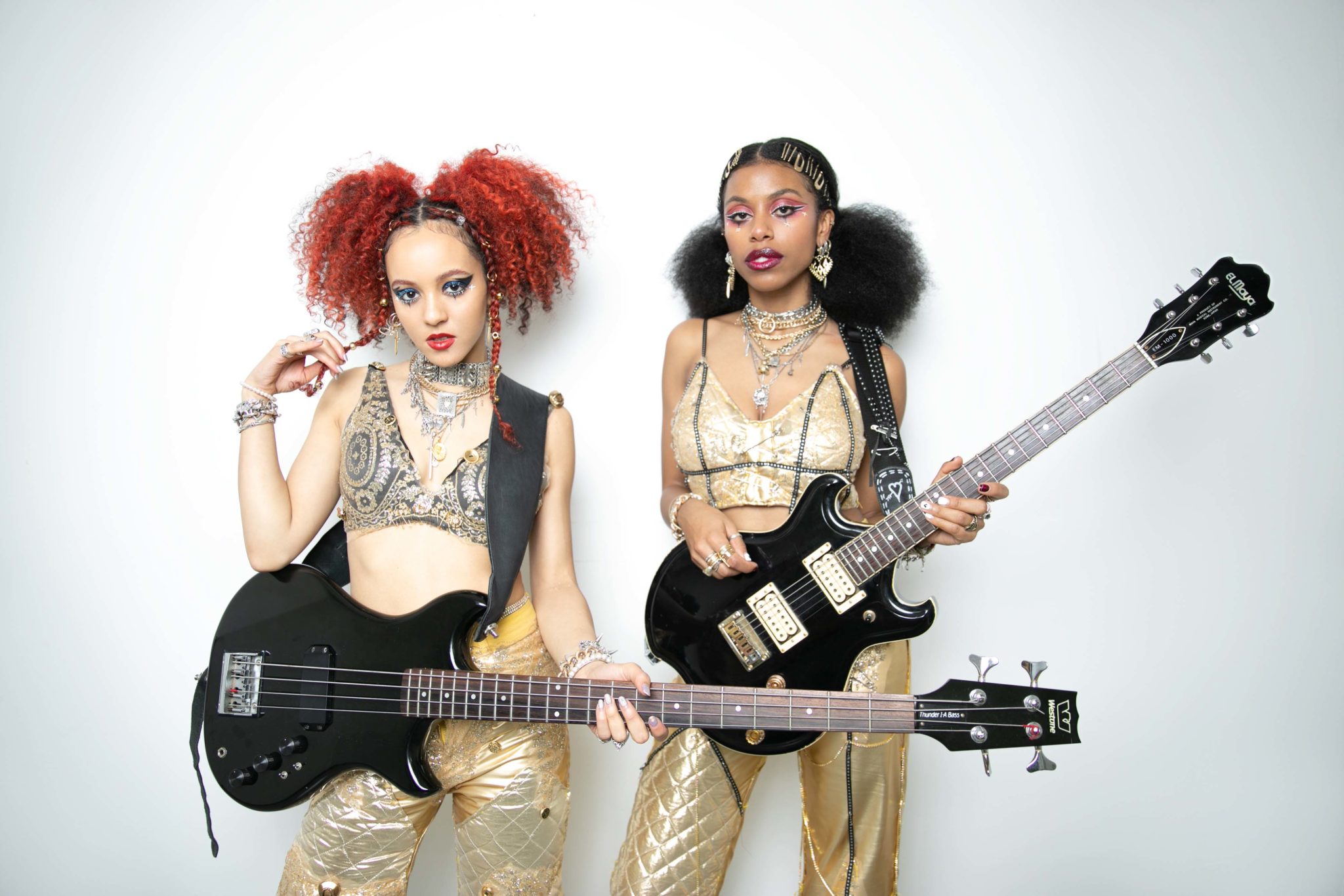 All proceeds from the compilation went to The Black Curriculum, a group that aims to deliver Black British history to students across the UK.

“In schools, you don’t really hear about the full Black history,” Georgia elaborates. “From talking to people, and from our own experiences, we found that it only started from slavery or from watching Roots. There’s so much history before that.”

“100%,” Amy nods. “It’s like, ‘If you’re a Black person, you started off as a slave! And then white people freed you!’ It’s so toxic. So it’s good to make sure the right education is out there.”

In late 2020, Nova Twins also sparked headlines after penning an open letter to the MOBO Awards calling on the annual awards, which celebrate ‘Music Of Black Origin’, to add a Rock/Alternative category. Has much progress been made there?

“Watch this space…” Amy smiles. “We actually had a lovely meeting with [MOBO Awards founder] Kanya King. It was amazing getting to speak with her, and hearing all the things she’s had to go through to keep the MOBOs going. We definitely found a lot of common ground. We really hope that there will be a good announcement sometime this year. So we’ll see!”

Supernova is out now. Read our album review here.