“We never have to talk/ You just take your tongue/ And press it against my mind/ We go down on one another/ You’re my favourite kind of lover/ With your kissing, fucking, eating, moaning/ Kiss it, fuck it.”

You won’t be surprised to hear that when I featured Marika Hackman’s Any Human Friend on my Newstalk Pat Kenny Show review slot recently, it wasn’t the song those, er, heartfelt lyrics are lifted from that we played.

Coming on like a cross between Anna Calvi and Polly Harvey with a spot of St. Vincent thrown in for good measure, ‘All Night’ is one of eleven reasons why the Hampshire-born, London-domiciled singer is such a hot property at the moment.

Did Marika Hackman deliberately set out to make such a revelatory record or did she become emboldened along the way?

“I don’t like to tie myself in knots by saying, ‘I’m going to do it this way or that way and it’ll be this genre or that sound’,” the amiable 27-year-old reflects. “I tend to just go with it but, yeah: there was an intention to play off the directness of the last album (I’m Not Your Man), which I thought worked really well. I love and feel confident performing those songs – ‘Boyfriend’ was a key one that I got an amazing response to – so why not see how much deeper I can delve into it? The challenge was, ‘How candidly can I bare my soul?’”

The answer being “very!” It’s one thing baring your soul alone in your bedroom, and quite another sharing it with a potential global audience of billions on Spotify. Does Marika ever go, “Shit, I’ve told a bunch of strangers my innermost sexual secrets”?

“Er, a little bit, but it’s worth it to have a dialogue and hear what they think,” she reflects. “Songwriting is a very solitary process, which you initially only invite a few people – management, your producer, whoever – into and then you get to make a connection with, as you say, strangers, which is the whole point of music. It’s the other half of the dialogue, which you’ve started. Seeing whether that honesty and directness has been successful is vital.”

Any Human Friend is the type of album that people will emotionally invest in wholesale. Who were the artists growing up that Hackman felt that way about?

“I didn’t fall in love with anybody musically until my teens when I discovered Laura Veirs,” she recalls. “I was absolutely obsessed and listened to her all the time. I had a poster of The Shins on my wall, which shows the commitment there, and I really got into Beach House and Warpaint. You can hear those crushes, which I had between the ages of 13 and 19, in my early work. They made me really think about writing music properly and its potential as a career. My reaction to seeing Wapaint look so fucking cool was, ‘I have to learn to play the guitar properly’.”

As a pre-teen, Hackman desperately wanted to be John Bonham.

“I started on the piano, but we didn’t really get on because there was too much information at the time to take in, so I switched first to bass and then the drums, which was really fun. Having a lesson one day, my teacher asked, ‘What’s your favourite song at the moment?’ and instead of the expected Britney Spears or Spice Girls she got, ‘‘Good Times Bad Times’ by Led Zeppelin. Can I learn it?’ He was like, ‘I don’t believe you!’ but I went ahead and learned ‘Good Times Bad Times’ and loads more Led Zep tunes so John Bonham, you absolute legend, thank you!”

Is Marika a happy/sad/drunk/sober writer or a bit of all the aforementioned?

“I’m actually in my bedroom working on some new music now, and it being three o’clock in the afternoon am completely sober,” she laughs. “When I’m in album writing mode, I tend to be quite disciplined. I get up early, do a bit of exercise and then sit down at my desk and work all day. In the evenings, though, I’ll have a beer or three, which I find lubricates the mind and helps you express yourself lyrically.”

Has she ever come-to thinking, “Jaysus, what happened last night?” and then discovered a half-written song sitting next to a half-eaten kebab?

“No, nothing like that,” she insists. “There’s a point – probably around beer five or six – when it stops being productive. If I were that drunk I wouldn’t be sitting at my laptop trying to write music. The closest I come to that is writing lyrics on my phone on the night-bus home. That’s usually quite insightful! I don’t believe in this thing of having to be a tortured artist to create your best work. You can be having a lovely, cheerful day and something really dark will pop into your brain. I pull out my emotions as and when they surface.”

Does Marika have people come up to her and burst into tears, like Dolores O’Riordan did, because ther songs mean so much to them?

“Yeah, I have, which has been a real driving force keeping me going,” she notes. “It can be daunting – there’s an emotional weight from being so honest that I feel – but mostly it’s amazing to have younger people, who might have been living in the middle of nowhere and struggling with their sexuality, meet me and say, ‘Your album really helped me discover who I am and come out to my parents’. They get emotional and cry, which makes you realise the impact music can have. That thought really sustains me when I’m knackered and want to be doing something that doesn’t drain you so much. When I think of those people and how they drive me on I’m like, ‘They’re fucking amazing!’”

Was her own coming out a comfortable experience? “Yeah, I’ve had an incredibly smooth ride compared to most people,” she nods. “My family are all very, very relaxed. I didn’t want to come out at school because, y’know, kids are weird. They weren’t going to be cruel or beat me up or anything, but at that age sexuality defines you, and it’s all people can talk about. So I avoided that.”

Far from being a difficult listen, the likes of ‘I’m Not Where You Are’ and ‘Blow’ are awash with glorious melodies that if they weren’t so anatomically inclined would make Hackman a shoo-in for BBC Radio 2 airplay.

“You should have asked the label for the radio edits!” she chuckles. “I’m quite compliant but also creative in changing the lyrics from, I dunno, ‘We go down on each other’ to ‘We get down with one another’. When I sent that over to my manager, they laughed and said, ‘It’s both the poppiest and most obscene thing you’ve ever written. That’s just fucking classic you! You always manage to balance it out. The music sounds fun, so the lyrics are really dark. It’s really commercially viable, so you stick a load of fucks in it.”

Does she have maiden aunts in Hampshire going, “Tsk Marina; language!”

“Mum and Dad have some of the worst language ever – it’s where I learned it from – and wouldn’t have a leg to stand on if they were telling me off! Mum was saying the other day that as a teenager she was considered quite provocative, so it’s come down the generations. They have a mischievous side and appreciate I’m trying to push buttons and have fun with it.”

Currently living in one of the less salubrious parts of East London, Mile End, the 27-year-old comes from a posh co-ed public school background. And it’s not just any public school either. Charging around £11,000 a year, which is more than the Johnsons paid for their darling Boris to go to Eton, Bedales’ old boys and girls include Lily Allen, Gyles Brandreth, Daniel Day-Lewis and his daughter Tamara, Simon Cadell, Sophie Dahl, Minnie Driver, the future Earl of Snowdon, David Armstrong-Jones, and Marika’s teenage pal, Cara Delavigne, with whom she formed a band called The Clementines.

“Cara’s great,” she smiles. “It was one of those get-your-head-around-playing sorts of bands. We did ‘Torn’ by Natalie Imbruglia and an Iggy Pop one, the title of which I can’t remember. They let me come back and record the video for ‘Cannibal’ in the school, but I’m not sure that I’m held up as a glowing example of a Bedales’ education. I loved being there but it wasn’t until I left that my life took off.”

Any Human Friend was written under the influence of Katy Ackers’ metafictional 1984 tome Blood And Guts In High School, which also trades in sexual politics.

“I used to read all the time, but I feel like my attention span is shortening, which is quite terrifying,” Hackman rues. “That’s a book I absolutely devoured, though. I was blown away by its honesty and grotesqueness and mix of power and vulnerability. It’s not mandatory, but reading Blood & Guts… before listening to the album will give you an extra sense of what’s going on.”

While others might baulk at the idea of an 18-date American club tour taking in such venues as the Blind Pig in Ann Arbor, Missouri, Marika can’t wait.

“I spend most my life here in my bedroom writing music and get quite apprehensive about leaving my little safe space,” she admits, “but then the sense of adventure kicks in and you get to see how far into all these different corners your music’s gone. It’s hard work, but I really, really do love it.

“If your first touring experience was crap it might stay with you,” she concludes, “but my first time going round the States was with Laura Marling and Johnny Flynn who are both mates of mine. I also had a great five week run in Europe last year with alt-J who are such nice, fun humans. It was done on a shoestring in a splitter van with three day drives from Norway to Italy, but all so worth it. Like I say, I’m really not very tortured!” 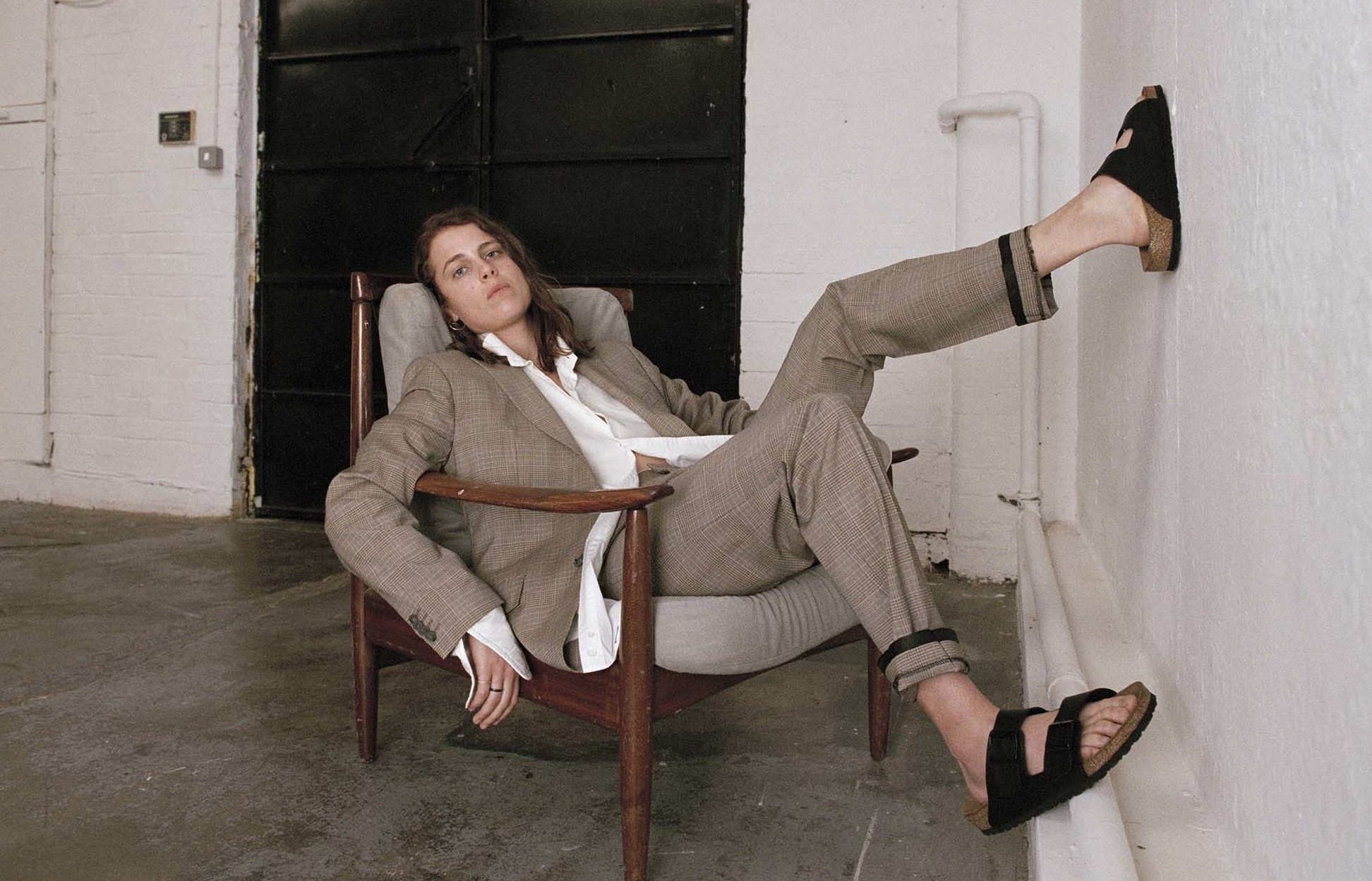 Live Review: Trinity College showcases superb music talent during Freshers Week
Album Review: Vieux Farka Touré Et Khruangbin - Ali
Live Report: The Black Crowes Shake Your Money Maker at 3Arena, Dublin
Yewande Biala: "A lot of people don’t see police brutality up close in Ireland, so they don’t believe it's here"
Student Special: "Although it's important to be aware of what's happening in the world, doomscrolling is harmful in a plethora of ways"
The Doctor Is In: Seán Millar on Song Writing, Paolo Nutini, Life, and Ruining Everything