On Friday last, a seismic ruling by the US Supreme Court overturned the judgement in the Roe v. Wade case from 1973, on which the right to abortion in the fifty States that make up the USA had been based. Recently landed in New York, Matthew Tallon joined protestors on the streets of New York, and discovered a city that is disillusioned with the state of democracy in America.

The mood in Washington Square Park feels bizarre. Earlier today (Friday June 24th, 2022), the Supreme Court ruled in a 6-3 decision to overturn Roe v. Wade, removing the universal right to abortion that had existed for the past 50 years across the USA. Thousands of people have gathered here to protest against this deeply divisive decision.

There is a sense of urgency about the need to respond. But, as I attempt to navigate my way through the thronged masses, I find myself passing not just protesters, but also all the park regulars. Old men playing chess, weed dealers, street acrobats: they're all going about their business, doing their thing, as if they weren't close to becoming engulfed in a chorus of outrage, on one of the most historic days in recent U.S. history.

At one point I stumble upon a guitarist playing a heavy metal cover of ‘I Will Survive’ by Gloria Gaynor. For a while, I'm struck that this may be the most ill-judged show of solidarity ever conceived, but no, he's just a guy, part of the landscape. New York halts for no cause: an uncaring city full of deeply caring people. Or that is how it seems…

Like the park regulars, I feel myself at a strange remove from the events happening around me. I've only been in this country for three weeks. I woke up this morning and saw the news, and I thought "God, another fucked up thing is happening in America.” Then I realised: "Oh wait, I'm in America!"

Of course, the decision to overturn Roe v. Wade isn't just about America. In the first instance, for sure, it’s about the millions of individuals from marginalised and economically vulnerable communities in over twenty States, who yesterday had access to a basic healthcare right, and – the way things are shaping up – thirty days from now will not. In addition, however, it speaks volumes about the fight for bodily autonomy no matter where you are on the planet; and also about the nature of political struggle among all oppressed peoples.

Eventually I make it to the heart of what is a huge rally. There, Kiara Williams (president of activist group Warriors in the Garden) is giving a speech. She declares that today's decision by the US Supreme Court has "turned the clock back 50 years, to a dangerous era.” 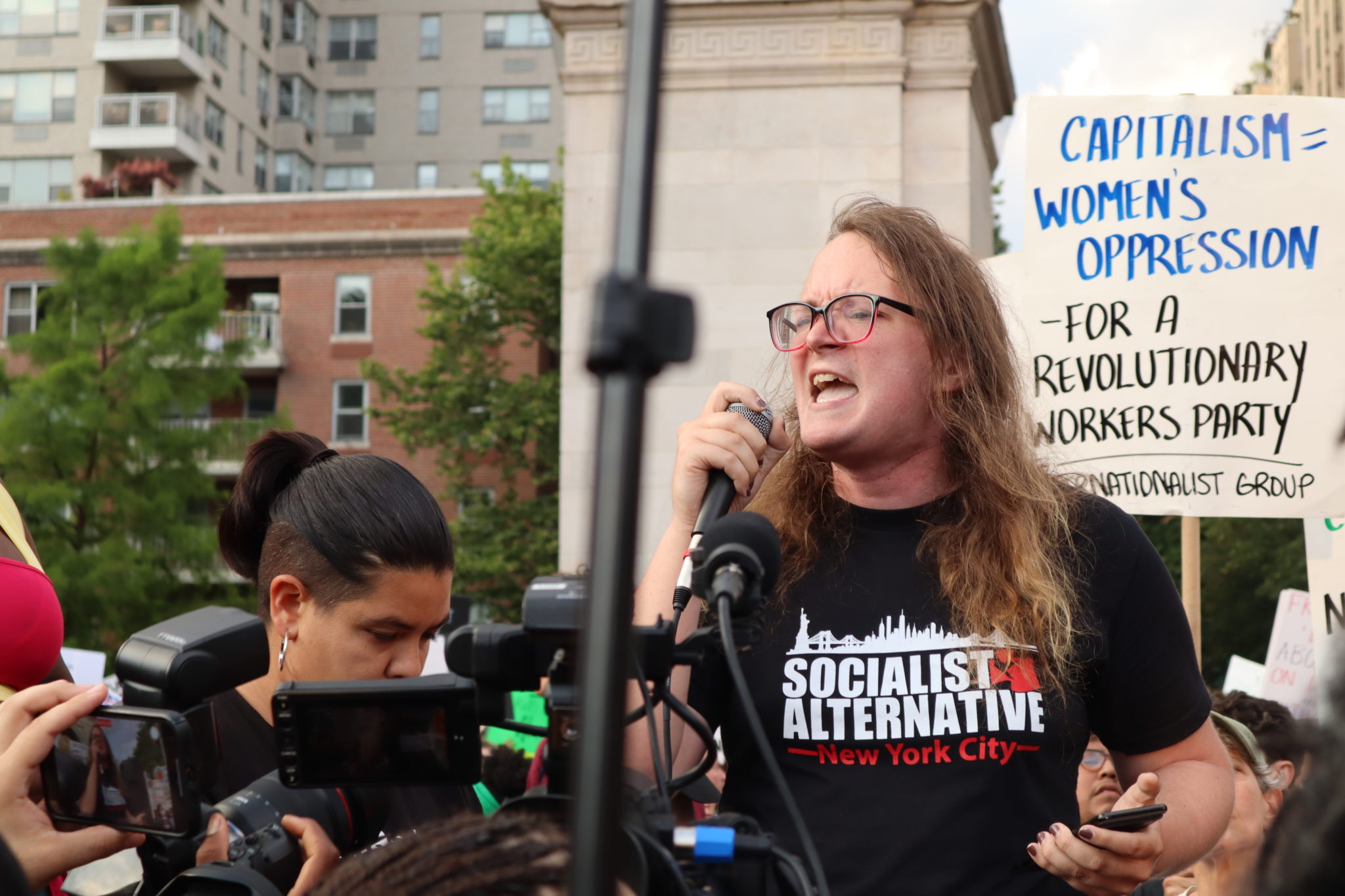 A cheer of assent flares from the crowd. This sentiment is echoed several times over the course of the evening. Illegal or otherwise, the demand for abortions will not diminish. Where they are illegal, abortions will be less safe. Women will die.

This is the work of the Supreme Court of the United States of America.

People often like to think of history in terms of the inevitability of 'progress'. There is a comforting notion that society always tends to get fairer, better, happier, as time passes. This view is especially prevalent in Ireland, a country that has changed drastically in the past decade with our hope-inspiring referenda on gay marriage and repealing the 8th Amendment.

Being here today, surrounded by placards that read "A gun has more rights than my body” – the ‘right’ to bear arms is more ‘sacred’ apparently than the right to control your own fertility – begs the question: what the hell does 'progress' even mean, when human rights that have been enshrined for 50 years can be stripped away overnight?

Williams's speech is interrupted by cries for a medic. Somebody has passed out, from the effects of the heat – 24 degrees seems more oppressive here than in Ireland – dehydration, exhaustion or despair. This happens every five minutes over the course of the demonstration. Each time, the otherwise-impenetrable swarm immediately parts like an imaginary Red Sea, to allow the required medic to rush through.

A series of speakers from various socialist and feminist groups take the mic. Their words are emboldened, fiery, and have an unwavering intersectional focus. The fact that this blow comes on Pride weekend is chillingly prescient. The notoriously conservative, Roman Catholic, Justice Clarence Thomas has already stated that overturning Roe v. Wade opens the door to "reconsider all of the [Supreme] Court's substantive due process precedents.” In his judgement, he directly cited the ruling that prevents States from outlawing consensual gay sex. Things may be about to get a lot uglier in America.

Clarence Thomas, writing separate in the abortion ruling, says the Supreme Court should now "reconsider" its decisions that found a right to contraception, sex between consenting adult men, and same-sex marriage — and "correct the error" it made in those cases. pic.twitter.com/8SnyCil7v8

What's more, abortion bans are obviously going to disproportionately affect people from impoverished backgrounds – notably people of colour – who will not have the money or the associated privilege to travel across State lines. As one speaker puts it, "the children of the people who put this law into place will be able to access abortion services if they need it."

The abortion issue is often framed in the media as an ideological debate between two opposing belief systems: the backward religious Republicans, and the enlightened Aaron Sorkin-dialogued Democrats. But the speakers today present it in a different light: as an all-out war between oppressor and oppressed, an act of subjugation by one branch of the State against its most vulnerable citizens.

The word 'disillusioned’ best captures the energy around me. Everyone here was brought up, fed with the belief that the words 'America' and 'democracy' are near-synonyms. But today's decision was made by unelected officials, who serve lifelong terms.

In his statement this morning, President Joe Biden urged people to act with their vote and keep all protests peaceful. At this New York gathering, the mention of Joe Biden elicits a sea of boos. Hearing the chants of "No Justice, No Peace!" swirling around me, one thing is clear: a lot of people are sick of the myth of American democracy.

When the speakers are finished, we begin the march across Manhattan. At this point, I'm starting to get nervous that things might turn nasty. We all saw the outbreaks of violence and police brutality that erupted in the aftermath of the murder of George Floyd. This morning, right-wing tabloids like the New York Post were stirring the pot, writing that militant left-activist groups were mobilising, and that there would be an increased NYPD presence.

We march through the streets of New York for over two hours. The sun goes down. People start to jump on railings and bridge ledges. We pass American flags getting burned in the street. I notice more and more police flanking us. Anti-cop chants erupt from the crowd: "Who do you protect? Who do you serve?"

I'd have a lot of sympathy for the protesters if things did get violent; what has happened today is, after all, an act of violence against birthing bodies. However, I must admit that, as an immigrant and also as a person who tends to rather enjoy not getting pummelled by men with guns, I'm feeling ready to dip if things take a turn for the more tear-gassy.

Luckily my capacity for cowardice is never fully put to the test. The protest – and the response to it – remain peaceful. Eventually, we wind up in Bryant Park. This time, we end up sitting down, listening to more speakers. It's kind of – and I feel weird using this word to describe anything about today – nice.

As I listen, I wonder whether we've achieved anything today. I'm relieved fighting didn't break out, but at the same time a march can easily start to feel like a simple exercise in catharsis, a subjugated people letting off steam so they can go back to living their subjugated lives more tolerably. It's clear to anyone who cares that the Democrats' appeal to vote blue in response to this decision is unlikely to be enough. So what power do we really have to fight this, other than chanting in a park while a metal guitarist shreds queer disco anthems? 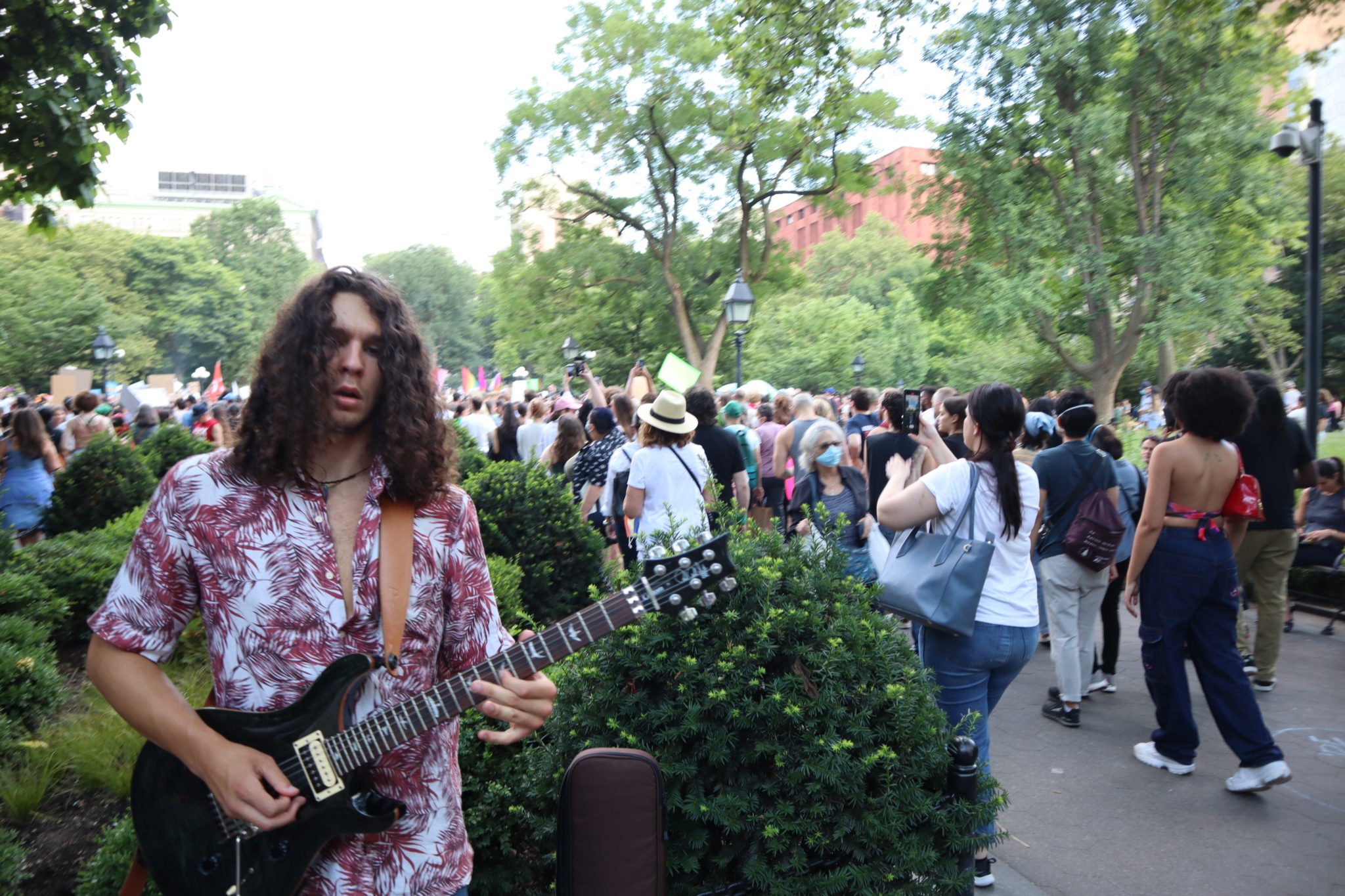 The word on every speaker's lips in Bryant Park is 'unionise' (or 'unionize', I guess). The way to stop this, the speakers appeal to the tired mass, is to call for work stoppages in support of abortion rights. Maybe it's the fatigue getting to me, but sitting here with the 17,000 or so people who came together today, this call for intersectional worker solidarity in the face of injustice feels just maybe possible.

Increasingly people seem to be realising that the greatest political asset available to them is not their vote, but rather their labour.

Either way, what’s happening in America right now, with the over-turning of Roe v. WAde, shows us that political struggle is not a slow, difficult journey forwards, but rather a constant battle, fought along many different fronts. Even when oppressed people do receive their rights, these are usually laden with caveats and the implicit threat that they could be taken away.

In Ireland, we repealed the 8th Amendment four years ago, and yet still only 10% of GPs provide abortion services. It still isn't allowed after 12 weeks. There is still a 3-day waiting period that serves no medical function whatsoever.

Today's events remind us that the fight is never over. Nothing cannot be undone. As long as the system – or key parts of it – are still in the hands of those who are driven by misogyny, anti-queer hatred, racism and classism, then your rights are never truly safe.

Of course, this is deeply saddening. There are so many problems Ireland has yet to meaningfully tackle – sexual violence, trans healthcare, the labour movement – that marginalised groups should not have to constantly look over their shoulder at the things they've already won.

The crowd starts to disperse, all of us uncertain what's going to happen next. But this evening's display has left me tentatively hopeful that people might just have a lot more power than those in power assume. The fight for bodily autonomy is not won or lost in America, Ireland, or anywhere in the world. But we must use every asset available to us: our vote, our voice, our labour, and most importantly, our unity.

The Hog: Why Are We Still Running Up That Hill?
Belfast court rules the Northern Ireland abortion ban breaches human rights
Irish Vote To Liberalise Divorce Laws Is A Vote For Freedom

Hot Flavours: Original 7, Afro Delight, Churriosity, The Bear and more
Live Report: of all living things bring shoegaze brilliance to Workman's
New Irish Songs To Hear This Week
Album Review: Stormzy, This Is What I Mean
Wilko Johnson: Rocking and Rolling and Without Regrets
Graham Norton: "I would watch The Late Late Show and fantasise about being a guest. It never crossed my mind to be the other person, the guy in the chair"