Ollie Bell: "So many articles and headlines about trans people are negative, but it’s not the reality. There’s actually huge support in Ireland for trans rights."
Ollie Bell (pictured) by Clara Bell.

The founder of Trans & Intersex Pride Dublin, Ollie Bell, discusses the organisation’s vital activism – and how many Irish people are ahead of the media on the issue.

Ollie Bell is a board member of Trans Equality Network Ireland – and also the founder of Trans & Intersex Pride Dublin (TIPD). The idea for a separate Pride march dedicated to the Trans and Intersex community occurred in reaction to transphobia in general, and in particular the rise in dangerous rhetoric against the community in Ireland.

Heavily marginalised, members of Ireland’s trans and intersex community are still forced to travel abroad to get necessary surgeries and healthcare, with years-long waiting lists to see an endocrinologist and obtain hormones. That’s surely not the way it should be.

Having begun with marches in 2018 and 2019, TIPD saw hundreds turn out each year to support the LGBTQ+ sub-group.

“It started out,” says Ollie, “as a response to the frustration and anger that many LGBTQ+ people and activists were seeing with the over-corporatisation of Pride, especially with mainstream brands in Ireland. There was this growing feeling that the community was being pushed to the side and companies were taking over in a tokenistic way. It felt like these corporations were there to just sell their products and appear to be LGBTQ+ inclusive. In other circumstances, some of these companies are actively harming the community.”

Ollie is unapologetically political in outlook.

“We wanted to bring Pride back to its radical roots. Even though we have marriage equality and gender recognition for some trans people, it doesn’t mean the fight is over for equality. The origin of Trans & Intersex Pride was around the time of the historic Repeal referendum. The issue of bodily autonomy is another issue linking trans rights and abortion rights. Trans people also want to be able to make decisions about their body without a doctor interrogating or gaslighting them. We hope to eventually secure a trans healthcare system that is for the community, listens to our needs, and where we get access to gender-confirming surgeries within Ireland rather than abroad.” 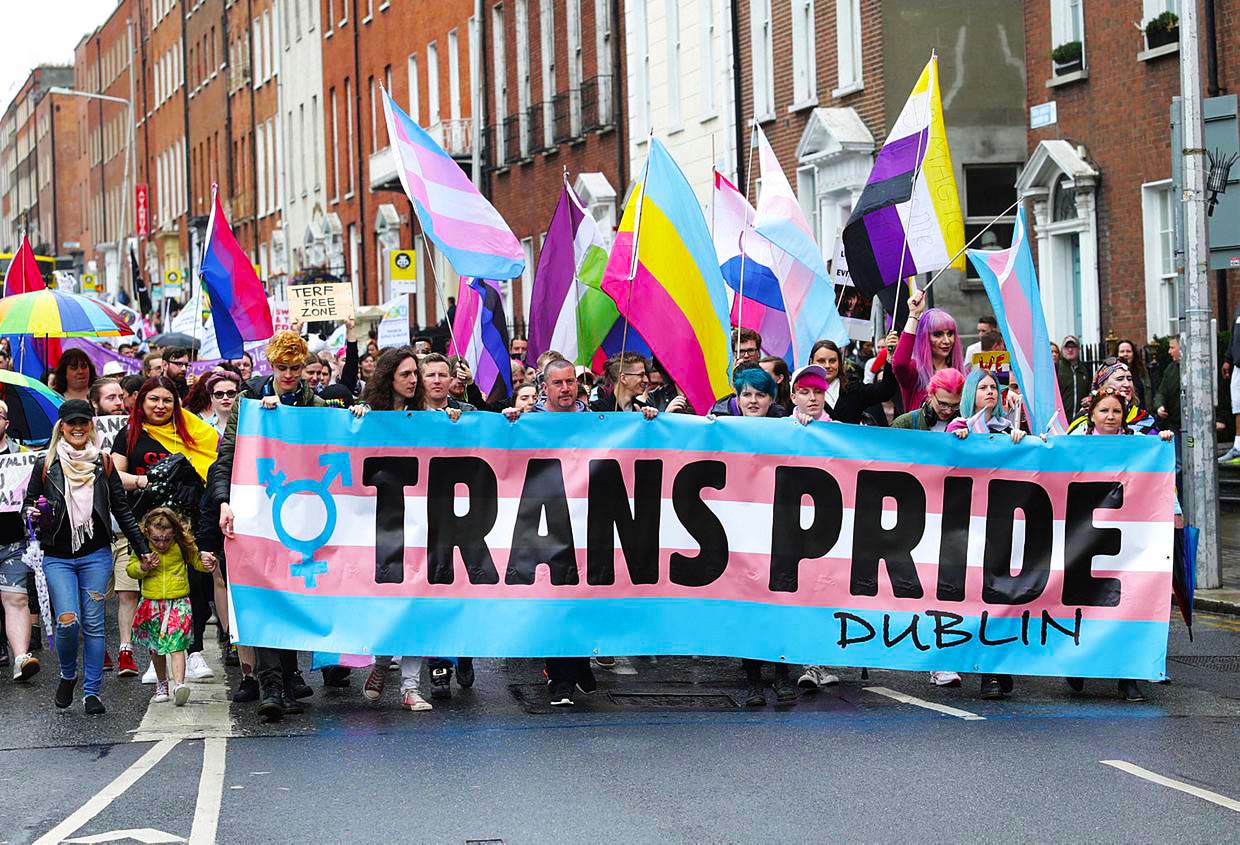 Trans & Intersex Pride Dublin was forced into a two-year hiatus as a result of Covid-19. But the plan is to be out there again in 2022, fighting the good fight.

“Our plan is to go back out onto the streets to spread awareness about the growing atmosphere of transphobia and the dangerous rhetoric we’re seeing in Irish media,” Ollie states. “It’s important that people come out and show their support for trans people. So many articles and headlines about trans people are negative, but it’s not the reality. There’s actually huge support here for trans rights, so we need to push back against the media.

“A recent lockdown survey showed that 97% of young LGBTI+ people are dealing with high levels of anxiety and stress,” Ollie adds. “It’s vital that young trans people have that environment where they feel important and can take action. They are the future and visibility is key. Trans people need to feel able to build a trans movement in Ireland.”

The problematic narrative which has evolved seems to imply that somehow cisgender people are being targeted, or will lose their own rights, if trans people gain theirs.

“It’s easy for the ruling class to encourage cis women to point at trans people and say, ‘They’re the reason their rights are being taken away’, when it’s the people with the power who are taking away women’s rights. Over in America, Roe vs. Wade is under attack, so there is that genuine anxiety and fear for cis women having their rights taken away. But it’s not because of trans people. It’s because of capitalism. If we came together in solidarity, we’d be unstoppable. We could fight for women’s rights, reproductive healthcare and trans rights.”

Is there light at the end of the tunnel for trans and intersex people?

“TIPD is a positive indication of the growing support trans people have here,” says Ollie. “Support from feminist groups in Ireland showcases the increasing acceptance and concern around trans issues, which isn’t reflected in our media. There has been, in my personal experience, people who have not fully understood the experience of non-binary genders. If you talk to an ordinary person, your first instinct is typically that they are accepting, even if they don’t understand it all.
“Even if they don’t know everything about trans rights, often they accept you. I’m not saying transphobia doesn’t exist, because it does, but I feel that compassion is growing towards trans people.”

Safe Access Zones legislation will come into effect late this year
Roe V Wade: How can we productively channel our anger for the US into change for the North?
Free contraception for those aged 17-25 to be rolled out in August