It is extraordinary to think that numerous members of the world-conquering US women’s soccer team will be unable to access legal, safe abortions in their home States. What the hell is America coming to – oh, and can I have an Irish passport, please?

My parents come from a time in which the assumption was that you’d drink your milk, listen to your elders, get married, have kids, and – finally – retire. Now, they travel across the globe with their backpacks, tackle hiking trails, and make friends with their Turkish tour guide who took them on a camel across the desert.

Along the way, things changed enormously for the better. They became freer to live their lives according to their own personal lights. So did my generation, following in their footsteps. Alas, however, as they get older, parts of the world have switched into reverse. The relative utopia of free decisions and breaking with norms is on the verge of destruction. And that is certainly true, right now, of the United States of America.

The news that the US Supreme Court is on the verge of abolishing Roe v Wade – and thereby overturning the common-sense view that women should have power over their own bodies – was extremely upsetting.

Now, I know that we are here to talk about soccer. But there are times when you have to go beyond wondering what the x-factor might be, that enables a midfielder like Kevin de Bruyne to bag four goals in a Premier League game against Wolverhampton Wanderers – or indeed complaining about the stupidity of turtlenecks that are too tight, rain jackets that aren’t waterproof, and smoothies that don’t contain chocolate or peanut butter.

Because this action of the US Supreme Court really is downright wrong.

For those who are unfamiliar with American law, Roe v Wade was a monumental court judgement that resulted in women being able to access safe, legal abortions in any of the 50 States that constitute the union. Ireland itself had a life-changing moment when the ‘Repeal the 8th’ campaign was successful, getting rid of the archaic logic of the ill-conceived and horribly intrusive 8th Amendment to the Constitution.

It seems like a no-brainer – like, your body is yours. You think inside of your brain, you make decisions somewhere between there and your heart, you feed yourself bangers & mash when your stomach makes noise, and you lay down on the couch when your head is sore from 5 G&Ts the previous night. Simple enough, right?

Apparently, some people – ultra conservatives, crotchety old white men, and “Karens” who’ve lost the plot – feel the need to take us back to Prehistoric Times. Back to when dinosaurs roamed the Earth, Pangea was the #1 tourist hotspot, and women (and men) were getting ready to crawl out of the primordial slime.

It has been a long road from there to here. In recent times, women have been fighting for control over their own decision-making. For fair treatment in the workplace. The right to dress how they want — even if it is body-con dresses that went out of style in 2001. For equal pay in sports. For voting rights, in the most retrograde of countries. And for control over their own reproductive choices.

The battle for equality has not been won everywhere, not by any stretch of the imagination. Afghanistan just introduced a law requiring all women to cover their faces — so, while I’m on the topic, can we all stop giving out about the little bit of time when we had to wear a face-covering in Dunne’s to protect us against a deadly and global pandemic? Thank you.

Would repealing Roe v Wade actually change a lot? The answer is YES.

In repressive dictatorships, people have no autonomy. Individuality, creativity, personality and freedom are all curtailed or denied entirely. Without putting too fine a point on it, the repeal of Roe v Wade is a significant step in that direction.

And then there is the issue of safety for American women. The truth is that overturning Roe is not going to stop abortions. Everyone knows this. But it will stop SAFE abortions. Some women will be able to afford to travel across State lines to a clinic where abortions are provided safely and legally. But many won’t and so will be forced to have an illegal operation, or attempt to end the pregnancy on their own. Either way, their health and safety – even their lives – will be at risk.

We are slowly venturing into Handmaid’s Tale territory, with rumours of checks being mounted at State border crossings to potentially halt women, young and less young, from traveling into another jurisdiction to get an abortion. If you thought this Hulu hit was outrageous when it premiered in 2017, buckle up for the 2022 autumn season (in real life, not on your smart TV). 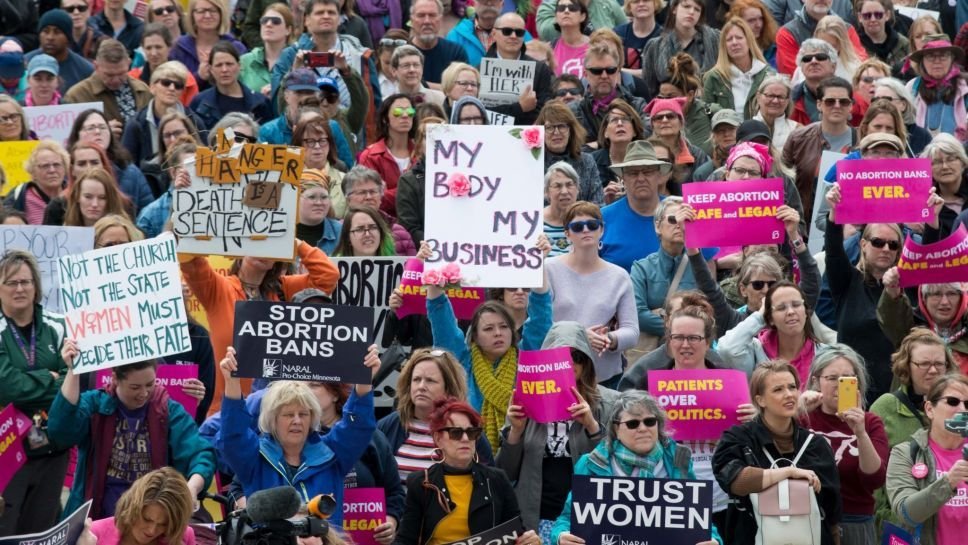 In this dystopian new world, in some States at least, teenage girls – think of friends you know who are studying to do their Leaving Cert – who have been raped will not be allowed to make a choice for themselves to get an abortion. A woman who has, in the past, had a dangerous and life-threatening pregnancy, will be forced to carry the child to term. Against her will.

Let those last three words really sink in: against her will.

To understand the phrase, maybe it’d help to take it down to basics. Imagine telling a guy he can’t go to the pub to watch the match. He can’t ask for a raise at work. He can’t cut his hair. He can’t choose his clothes. He can’t drive a car. Unthinkable, right?

Well, that’s the kind of world that is beginning to take shape in the US.

Ireland has done ALL of the right things in recent years and moved towards a more progressive culture (including accepting those who wear flare jeans). Repealing the 8th in 2018 was an amazing step forward for women in the battle for equal rights.

So, where did the US go wrong? How did the ‘most developed’ and the ‘most influential’ country in the world regress so far? We could blame it on any number of things. Trump, a culture of misogynistic men in power, religious zealots who camp outside of fertility clinics, and so on. I was going to throw pineapple on pizza in as a joke, but this is too serious for that.

These issues do weigh particularly hard on the minds of women in sports. Many of the leading lights in athletics have children and return to full-time training and competition. But any woman who is earning her living from sport – and from a contact sport like football in particular – has to think long and hard about the right time to have a child.

There can be mental health issues involved. It can derail a career. Get the timing wrong and all sorts of difficulties can present themselves.

In which light, it is extraordinary to think that at least some of the women on the U.S. Women’s National Soccer Team will not be able to make a decision to have an abortion in their own States, if Roe v Wade is indeed overturned. They’ll have to board an aeroplane and travel hundreds, maybe even thousands, of miles to exercise that right – the way it used to be in Ireland. But it isn’t any more.

What I can say for sure, here and now, is that if this drift into a dystopian new era in the United States of America continues, then Irish citizenship will look more and more like a potential beacon in an increasingly dark time.

So, on the spur of the moment, I’ve decided: I’m now taking applications for a partner! Anyone and everyone can apply but there’s one essential qualification: Must Be A Good Cook…

Safe Access Zones legislation will come into effect late this year
Roe V Wade: How can we productively channel our anger for the US into change for the North?
Free contraception for those aged 17-25 to be rolled out in August