The Essex band finished their tour last night with an incredible performance at the 3Olympia theatre - featuring support from Airways and Bangor band The Florentinas.

Fresh off the release of their latest EP Moral Panic II — the follow up project to 2020’s Moral Panic — Essex rockers Nothing But Thieves hit the 3Olympia Theatre on Tuesday night (November 9) to wrap up their UK & Ireland tour with a bone-quaking set.

The quintet brought their explosive riffs, mammoth sound and infectious pop melodies to the stage on a special night for both the band and the fans. The theatre was pulsing in anticipation before their set and it was positively vibrating once they took the stage.

The pre-gig buzz was palpable as fans spilled into the 3Olympia theatre. Once the Covid passport checks were done, facemasks secured in place and tickets checked — it was straight to Maureen’s bar for a pint and a chance to settle in.

A mix of young and old filled the theatre eagerly — waiting for the night’s first support act, The Florentinas, to take the stage. At 7:30pm sharp, the lights went dark, the crowd roared and the Bangor band took the stage.

The Co. Down outfit caused quite a stir considering they only dropped their debut single ‘Sandcastles’ on October 28th. With booming drums, soaring vocals and aggressive strumming patterns, they wowed the crowd their opener. 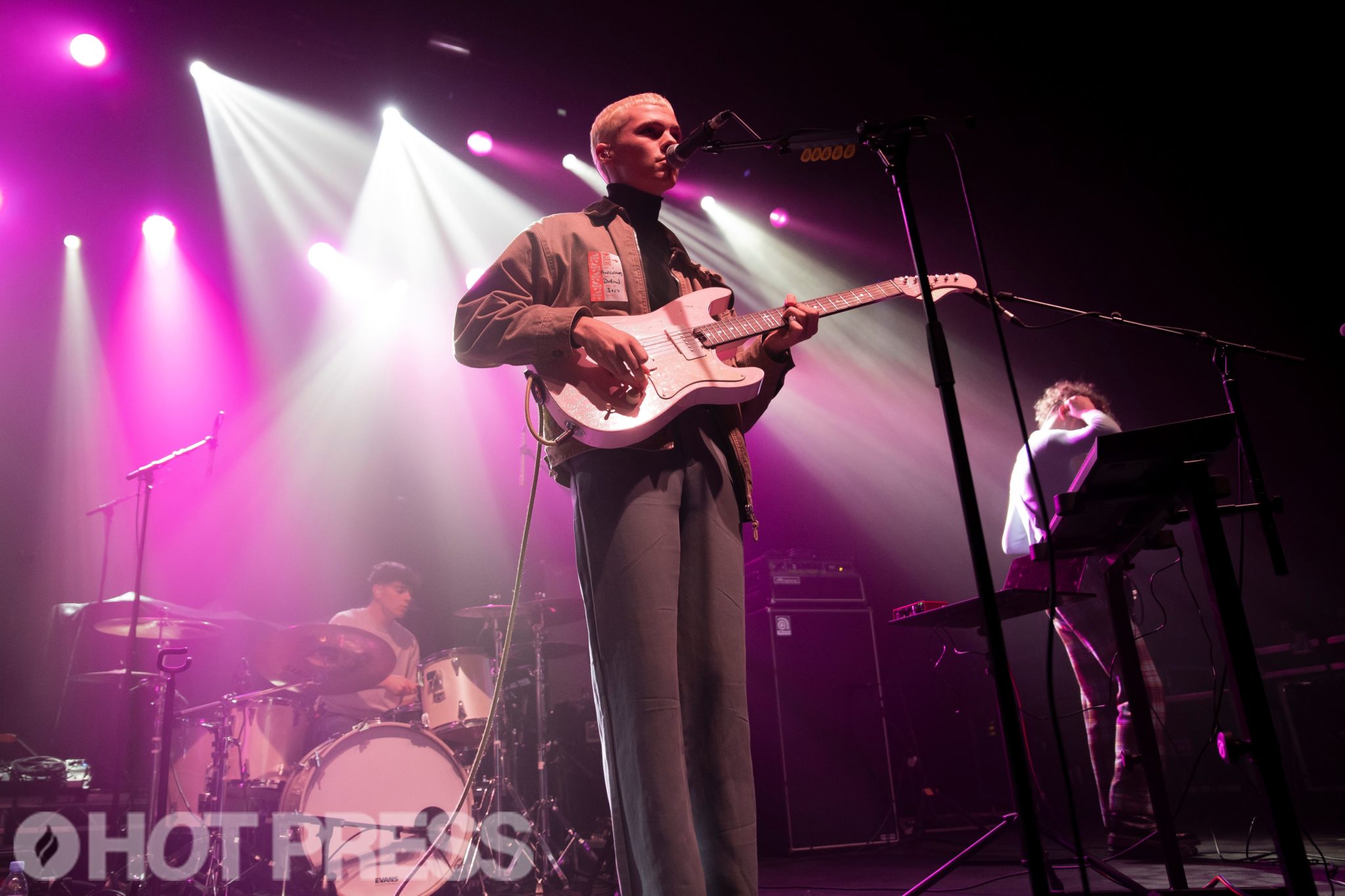 The Florentinas at the 3Olympia Theatre. Copyright: Peter O'Hanlon

The four piece performed their debut single ‘Sandcastles’ and the mesmerising riff coupled with Jakob Swann’s immense drumming got the crowd dancing along to the song. The indie-rockers then launched into ‘Stay’ and ‘Ghosts’ before they played their final number.

“Nothing beats an Irish crowd,” said Boyd before exiting the stage. “Dublin — you’ve been phenomenal!” he added.

London-based band Airways were up next and roared through their first two songs in a maelstrom of noise and aggression. The drums were jaw-shuddering, the bass was blow-your-head-off brilliant and the guitars were laced with attitude.

Airways then took a breath to introduce their next song ‘Alien’, which they said was about the band trying to go to America and having the door slammed in their face. Frontman Jake Daniels said they were advised to try and sort their visas in the embassy in Dublin but were told this was “bad advice” once they arrived. 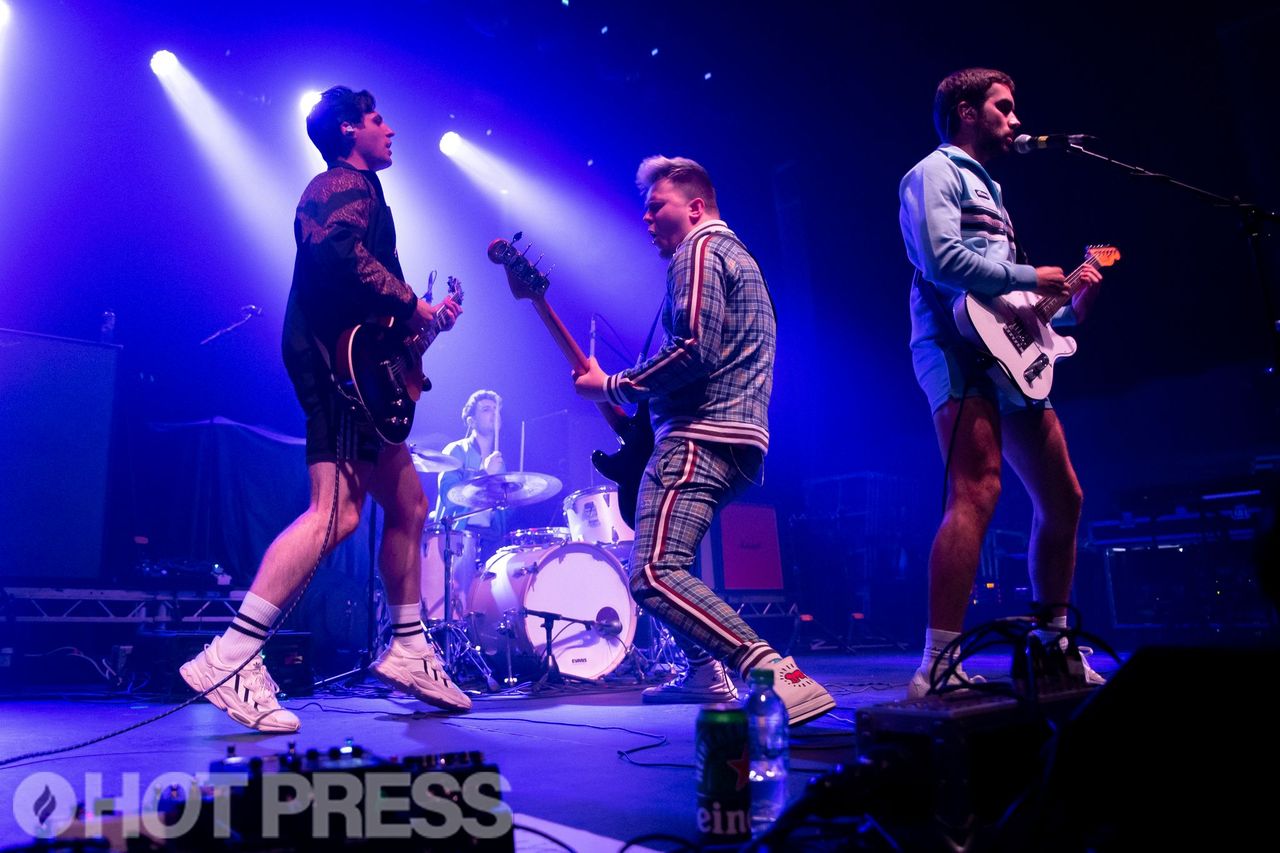 Daniels spat his lyrics out in between drummer Brian Moroney’s snare smashes. The lead guitarist switched between the catchy riff at the heart of ‘Alien’ and strumming at hyper-speed as he swigged from a can of beer.

The Peterborough band then powered through the deliriously aggressive ‘Me And My Brain’ from their debut album Terrible Town.

Jamie Reynolds' bass was at the forefront of the next track which featured a staccato guitar riff. The bassist thrashed around wildly on stage as he sent his soundwaves rattling through the crowd.

“We had a great fucking time!” exclaimed Daniels as he took to the keyboard for Airways final song of the night, ‘Listen To Your Friends’ from Terrible Town. The quartet thanked the crowd and made their way to the wings as the audience waited for the night’s main event.

Suspense grew as the guitar techs and sound engineers tuned instruments and made sure everything was prepared for Nothing But Thieves. It was the last chance to grab another pint as the crowd moved closer to the stage.

Then — all at once, the stage went black as five silent silhouettes made their way to their instruments and the audience went up another gear. Nothing But Thieves immediately burst into their latest single ‘Futureproof' to the crowd’s ecstasy. 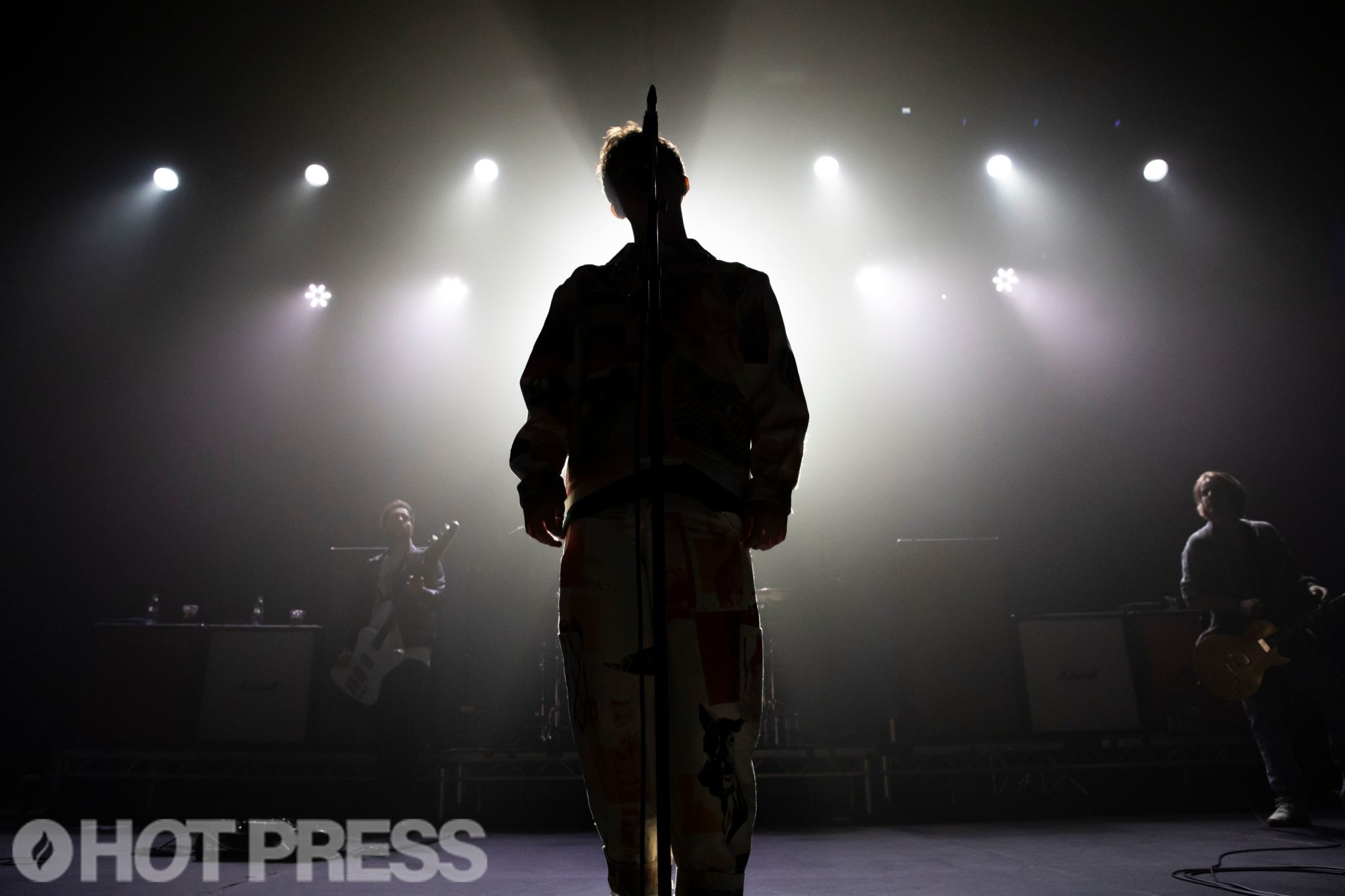 Nothing But Thieves at the 3Olympia Theatre. Copyright: Peter O'Hanlon

The band ran through the hits including ‘I Was Just a Kid’ which featured a blistering riff from Langridge-Brown. “I can tell you haven’t been out of the house recently,” joked Mason when it finished.

The British outfit played ‘Trip Switch’ from their 2017 album Broken Machine, followed by ‘If I Get High’ before performing ‘If I Were You’ from Moral Panic II. The audience particularly enjoyed this as Mason got into it with some great screams.

“I guess you guys haven’t seen us in quite a while,” Mason said at one point to the crowd - who were singing every word. The singer mentioned that they had released a lot of songs since they last played here. They offered a number of new tracks along with some old favourites.

“Maybe I'm defective / Or maybe I'm dumb / I'm sorry, so sorry / For what I've done,” rang around the venue as the gruup played ‘Sorry.’ The touchingly hopeful ‘Free If We Want It’ followed. 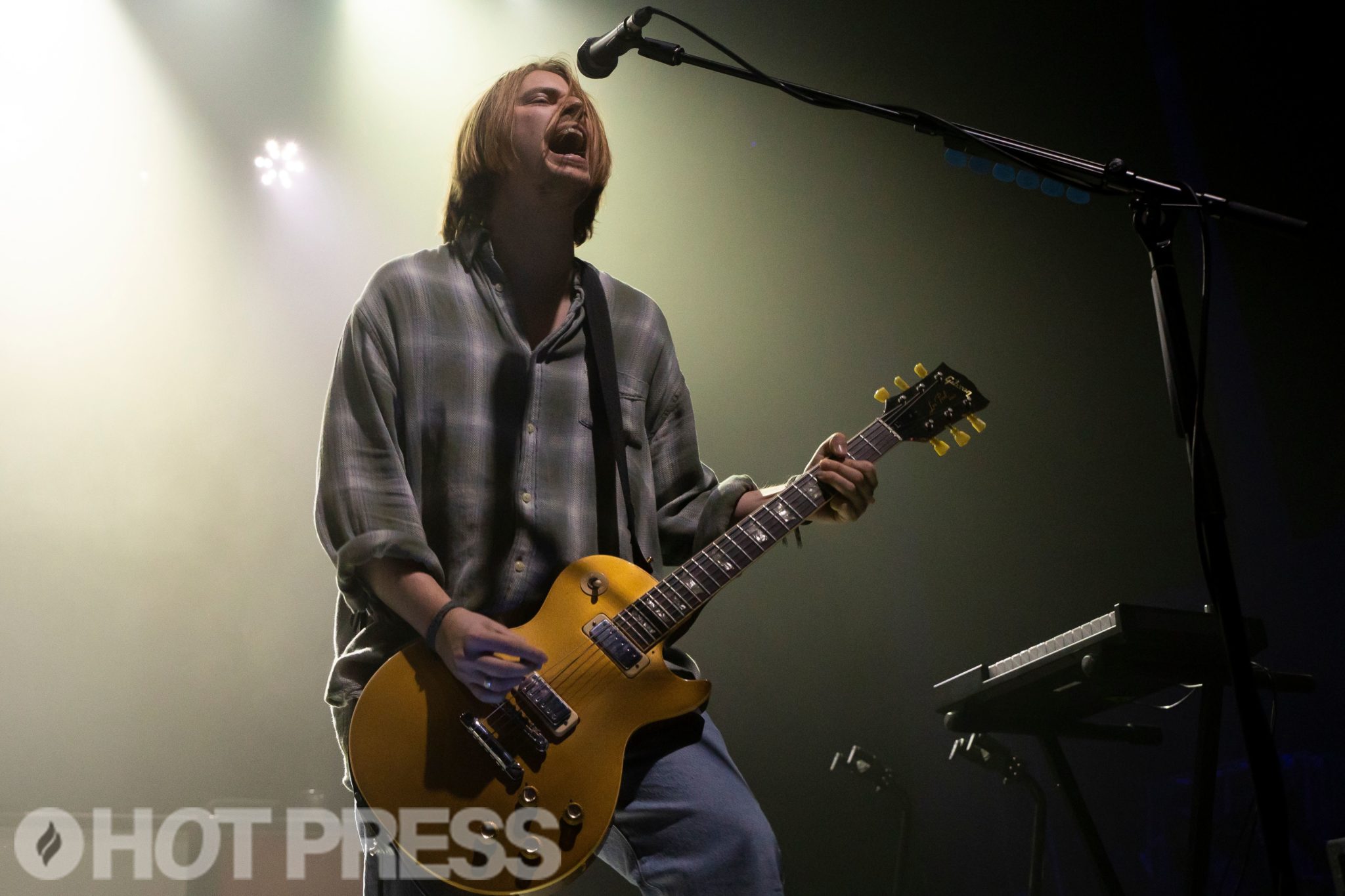 Nothing But Thieves at the 3Olympia Theatre. Copyright: Peter O'Hanlon

NBT left the stage briefly before returning in a blaze of red strobe lights and letting rip with the Orwellian ‘Unperson’ from Moral Panic II. This lit up the 3Olympia theatre as Mason delivered the hypnotic hook.

“You guys are fucking great — like absolutely amazing,” said Mason as the song ended before Blake and Price left the stage for the remaining trio to play ‘Particles.’

‘Your Blood’ from the new EP was a high point of the night as Mason tenderly strummed the acoustic guitar in the first half of the song before Langridge-Brown’s slicing riff took over.

NBT then performed ‘Everybody’s Going Crazy’ followed by ‘Amsterdam.’ The latter propelled NBT to new heights upon its release and its catchy melodies are just as infectious as ever. The band then left the stage as chants of ‘One more tune’ and ‘Olé Olé Olé Olé’ came from the crowd.

Nothing But Thieves came back to play two more songs — finishing with ‘Impossible.’ Mason was operatic during this cut as the band played louder than they had all night for the finale of their UK and Ireland tour.

“That was fucking awesome,” said Mason as the band shouted out their support acts, thanked the crowd and made their final bow. It was a fantastic night with The Florentinas emerging as bright new stars and NBT’s phenomenal set wowing the crowd.