British pop star Charli XCX dominated Dublin's 3Olympia Theatre on Friday night, with a setlist paying homage to the new and the nostalgic. The English pop icon blazed a trail on the Electric Picnic stage in 2019, and has since returned to the Emerald Isle for more.

That’s British pop rebel Charli XCX, pointing an urgent finger at every comfortably seated person in the crowd at Dublin’s 3Olympia Theatre on Friday night. It translates as a demand, but to be in the room was to know that Charli was simply reaching a hand out, pulling everyone into the boundary-breaking bubble of the eccentric realm she has constructed.

I was shaped by an internet-corralling generation obsessed with the allure of chaotic popstars, an era for which Charli XCX was a sort of dreamy figurehead. And yet, I never found myself caught by the sharp hook of the pop artist’s music. ‘Boom Clap’ was on regular rotation throughout my teen years, but whose playlist has that track not been part of at one point or another? Like some of us, I was too busy getting caught up in mundane reality.

The crowd surges with a unanimous adrenaline rush even before the woman herself appears. Partying begins without a show opener - but if there’s any audience who can do without a support act, it’s this one. The floor below is a sea of pride flags and extravagantly dressed twenty-somethings, holding gin and tonics in one hand and each other with the other. From my above-ground view, I watch as strangers quickly become best friends, making after-show plans to head to The George.

Charli’s arrival is abrupt: blinding red and blue lights illuminate the room as a car engine purrs. Cars and Charli are a synonymous symbol – but the pieces of that puzzle fall together only now, as she appears out of thin air to the deadly sound of a crash. She is as much the product of chaos as the instigator.

It’s evident that rock-bottoms and anguish are not Charli’s objective, even if those experiences produced some of the more accessible lyricism on her recently released record, Crash. The audience views her as their sparkling conductor, weaving them out of the realities of life and into the plush euphoria of temporary escapism. It’s a role she takes in stride, straight from the offset. “Dublin, do you wanna fucking party or what?” And so the spark lights the flame, and I find myself delighted to be caught in the fire.

Over uproarious screaming, the popstar opens with ‘Lightning.’ She’s flanked by her exuberant backup dancers (Grant Gilmore and Nathan Kim), who fall to either side of the singer as they breeze through synchronised, mirrored choreography, hitting every bump, curve and angle of each modulated melody. 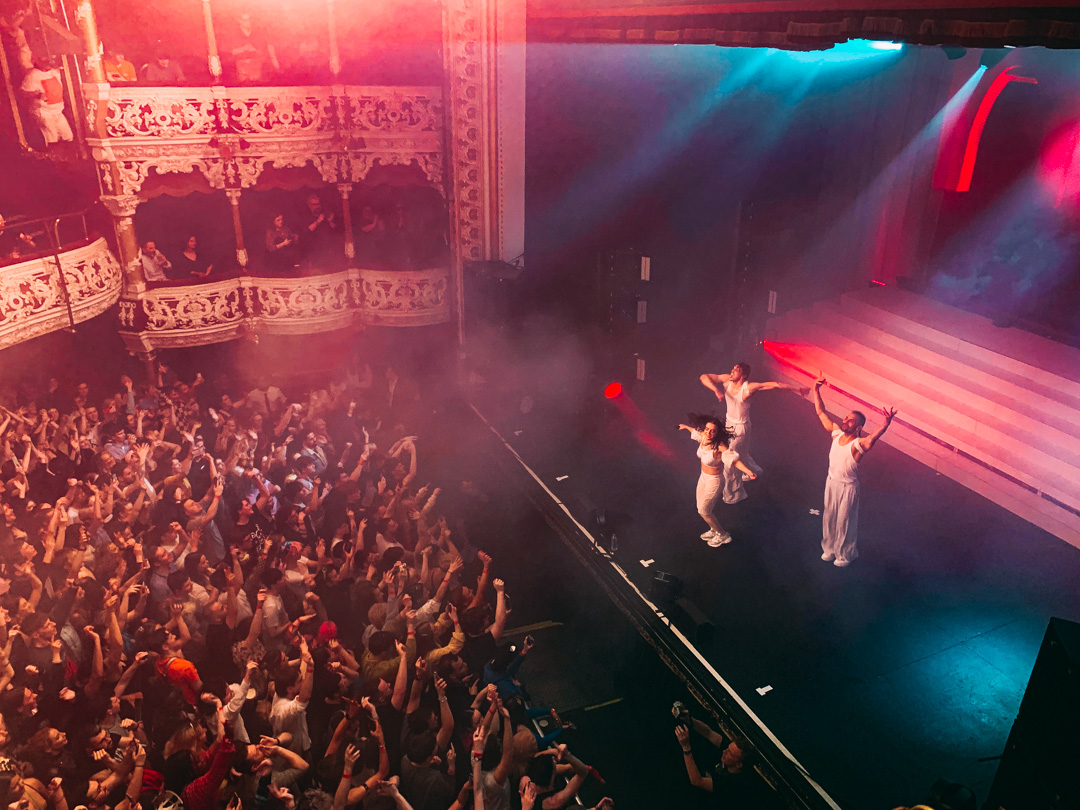 Transitioning into ‘Gone,’ is a seamless effort, despite the years of separation between Crash and her post-PC collaborative mixtape with A.G. Cook. Marked by claustrophobic banging and faltering, funky bass, Charli is defiantly self-aware as she voices, “I feel so unstable, fucking hate these people.”

Charli’s sparkling presence shines through for ‘Constant Repeat,’ in front of a stage-wide screen projecting an illuminated blue moon. A fitting visual, as the performance takes celestial flight, swerving through an atmosphere of harmony with vocal runs in the chorus and sharp pops throughout its addictive verses. The singer falls to the ground at the bridge of the song, as the metaphorical rocketship returns to the station, before scurrying off-stage while her rhythmic sidekicks distract with playful, partnered choreography. 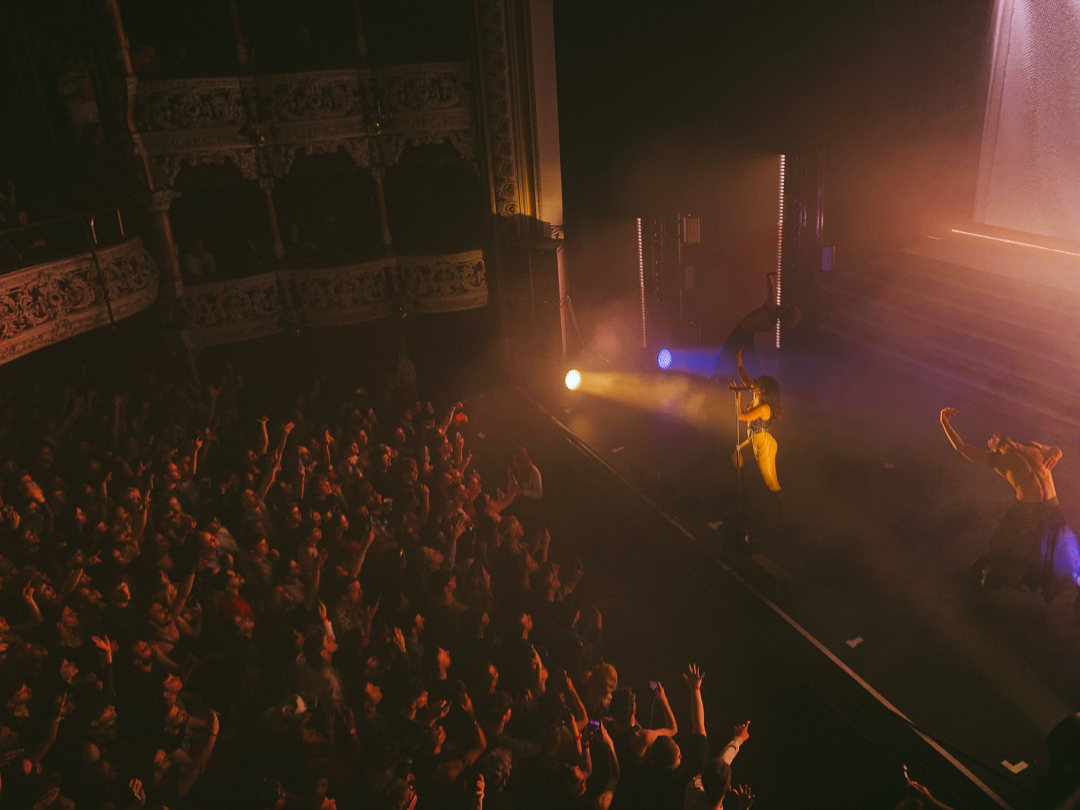 A patent black unitard is replaced by a minimal two-piece fringe ensemble. Charli re-appears and ignites the calamity once again, shouting, “Fuck it up, Dublin!” as the seductive first notes of ‘Baby’ infuse the room with a feel-good sound and colour distinct to disco-pop.

‘Yuck’ is arguably the most commercially pop moment in Charli’s discography, yet it works to her advantage onstage. The crowd relates to her distaste for the obnoxious elements of modern love and obsession, chanting along as she teases, “Sending me flowers, I’m just tryna get lucky.”

Off the back of Crash, a vibrant performance piece exploring the complexities of the music industry along with the pains of love and loss, the hyper-pop icon seems to have established herself as an artist exceptionally capable of beautifying breakdowns. But onstage, she shows little interest in dragging out emotional lapses. 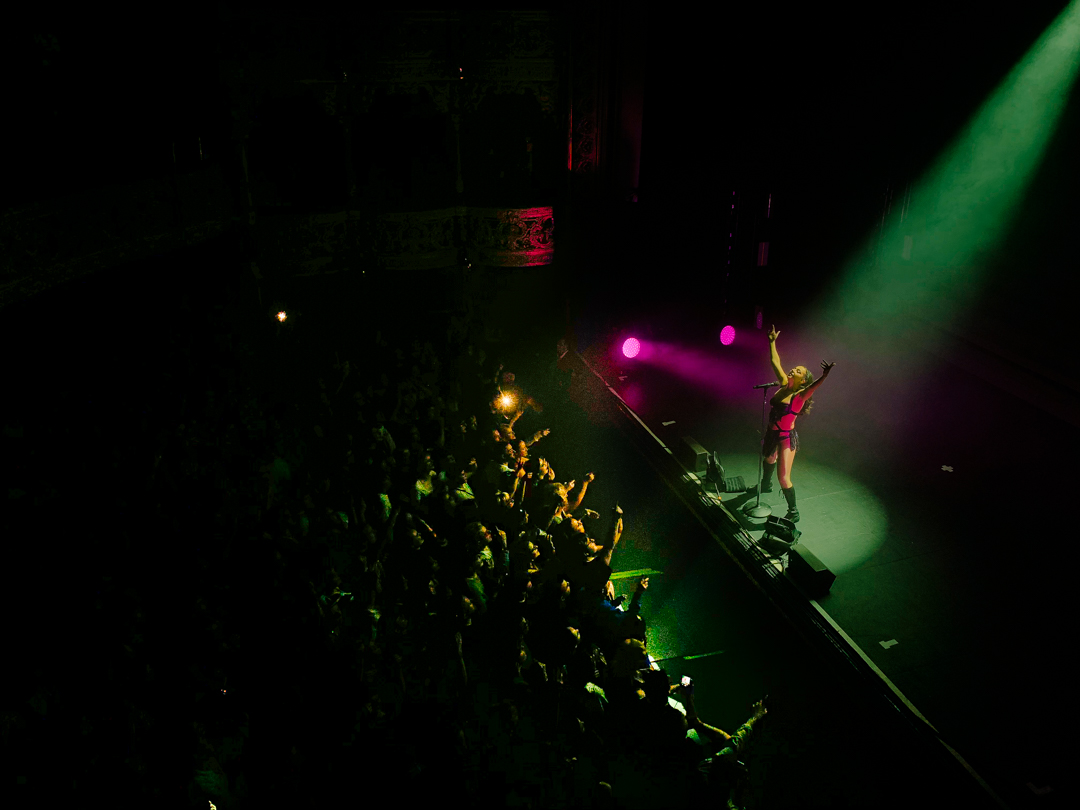 She asks her audience, “Are you ready to get emotional with me?” as she sits still on the top step of the 3Olympia stage for the roughly three-minute duration of ‘Every Rule,’ before diving head-first into the swelling, breathless ‘party 4 u.’ She grounds herself in a power stance, gestures sporadically as she sings-raps the verses. And then, over her own distorted and layered vocals, she disappears into thin air.

When she struts back onstage, she’s sporting a red and black dress and announcing, ‘I think you might know this one,’ with detectable chagrin. The chorale intro to ‘1999’ ignites the crowd ablaze, as the singer and her dancers move in triangular syncopation.

During ‘Boom Clap,’ I lock eyes on a girl and her friends, holding each other in a huddle, screaming along to the chorus. I imagine how many people in the room are also seeing themselves at sixteen, blaring this very song through the blown-out speakers of their first car. There’s a sense of unification between the evolved Charli leading the room, whose career also began at just sixteen, and all of us who connect her music to certain fleeting moments. In a venue teeming with virtual strangers, the song evokes an unexpected intimacy, plagued by nostalgia, which lingers until the night’s end.

Charli is impossibly energetic for the encore, squeezing out every ounce of mayhem as she bounds around the stage in sparkly athletic attire. “It’s Charli baaaabyyyyyy!” the singer announces before leaping into fan-favourite, ‘Vroom Vroom.’ Paying homage to her devoted LGBTQIA+ fanbase, she picks up a flag thrown from the audience and wraps herself in the slogan, ‘Charli loves gays.’ “I do!”

Only after governing every soul to stand from their seats and join her in wildly thrashing about to the pandemonium of her performance does the star finally fall onto the floor, relinquishing her power. She is commanding, magnetic, and like many of the faces in her crowd, she thrives in the cathartic release of her own chaos. Getting back to reality feels more like a comedown.

Listen to Crash below:

Live Review: Des Bishop brings laughter and tears to the 3Olympia Theatre
Bono – Stories of Surrender in Dublin: "Why would he put himself through this? Now we knew…"
Live Report: Rina Sawayama brings electric atmosphere to Dublin's 3Olympia Theatre