Leo Varadkar: "I don’t like the idea that people ‘ought’ to have a particular political philosophy because they are brown, or white, or female or gay"
Leo Varadkar.

When Leo Varadkar became Taoiseach in June 2017, he was among the first out, gay prime ministers in the world. That his father was an immigrant from India only added to his singular status as an Irish political leader. Now serving as the Tánaiste, and Minister for Enterprise, Trade and Employment, the Fine Gael leader answers our questions on equality, diversity, growing up homosexual in Ireland – oh, and the future of the world...

Ireland was a relatively mono-cultural place when you were growing up. As the child of an immigrant father, were you made to feel ‘different’?

I was different. I was the only person of colour in my class in national school. West Dublin is probably one of the most diverse places in the country now.  It was very different in the 1980s. A bit like how Barack Obama put it, ‘I was the tall, dark kid with a funny name’. Generally, young children want to fit in and be just like their peers.  It’s only when you get older that you appreciate the benefit of being an individual and being different.

Did your father’s Indian background make it more difficult to come to terms with your sexuality?

I don’t think so.

Were you afraid of alienating him – or indeed your mother?

No. My parents had an inter-racial marriage back in the 1970s. He is Indian. She is Irish. He is Hindu and she is Catholic. For their age, they are pretty liberal and progressive. My father was very supportive. He already knew and was waiting for me to tell him. My mother was more concerned. She felt that people would use it against me, that it might hold me back in my political career, that I might be subject to abuse or even violence. She came around pretty quickly though.

Was a feeling of shame about being interested in men rather than women a big part of that?

No. Shame was never an issue for me. It was more a case of being concerned that people would treat me differently. I had a lot of anxieties about that. Would people be uncomfortable with me in the changing room of the gym or before a rugby match? Would my friends and colleagues treat me differently?

You were relatively late coming out – what would you say now to teenagers who have a strong sense that they are LGBTQ+, but haven’t told anyone?

I think everyone’s experience is different. I was lucky in that my experience of coming out was a positive one. I know this is not the case for everyone. The most important thing is to come out to yourself. You have to do that before you can come out to others. Your family will almost certainly support you. They probably know already. So will your friends – and if they don’t they are not real friends. Most of the things you are worried about are your own anxieties and you’ll laugh about them in the end. I don’t know anyone who regrets coming out, even those who did not have a good experience.

Do you feel that your sexuality is something innate – or is there an element of personal choice involved for people?

Certainly for me it’s not a choice. It’s who I am. I think we are wired differently. That’s why I think concepts such as conversion therapy are so abhorrent. Maybe there is an element of choice for some people, but I have to say I have never met anyone who said that to me.

How important to you personally is the fact that Ireland has become much more accepting of people who are LGBTQ+?

I think it’s hugely important. So many good people left the country for America or the United Kingdom in the past. We lost a lot of great people. Others were forced to lead secret or double lives. It’s so much better to be the country that we are now. I think it’s also good economically in terms of attracting talent, investment and visitors.  We should not forget that there are 190 countries in the world. Only 30 or so have marriage equality and in some places, like Russia and the United States, it could be argued that things are going backwards for the community. We have a long way to go yet, and in Ireland there are still many issues we need to overcome, ranging from homophobic bullying in schools to the availability of sexual health services.

The trans community feels that there is a lot still to be done about issues that affect them – what do you think?

Absolutely. It’s very difficult to be trans. The gender recognition legislation we introduced in the FG-Labour Government was a huge step forward and health services for trans people are slowly improving.  But it is extraordinarily difficult to be trans in Ireland today and I think they are extraordinarily brave. I think they are probably where gay men were 20 years ago, in terms of the pathway to equality and acceptance.

Earlier in your career, people might have thought that – despite your own background – you were negative about immigrants. Is there a tendency among immigrant families to over-compensate?

I have always been supportive of migration. My father is a migrant, as is my big sister and her family who live in London. I have family in the United States as well. Migration has made Ireland a much more interesting place culturally. It has strengthened our economy. You only have to meet the workforce in Google or Meta to see that. And public services like our health service simply would not function without migrants. I have always been supportive of accepting refugees from war-torn countries, including Bosnia and Afghanistan.

I do make a distinction though between people who come here legally and contribute to our society and those who come here illegally and seek to gain status through subterfuge or falsehood. As Martin Luther King said, people should be judged on the content of their character not the colour of their skin.

When you watch someone like Priti Patel, do you wonder how a child of an immigrant family can be so unsupportive of immigrants?

I think the deal the United Kingdom has done to send asylum seekers to Rwanda is disgusting. So, I am no fan of Ms Patel though I have never met her. I think a lot of people in the United Kingdom and indeed many other countries believe that they need tougher controls on immigration and greater control of their borders. These include people like Jeremy Corbyn and other left-wing politicians, who do not support free movement of people within the European Union. Bear in mind, Ireland’s population is still lower than it was in the 1840s. Britain is about twice our size geographically but has 65 million people, which is more than ever before.

I don’t like the idea that people ‘ought’ to have a particular political philosophy or have particular political opinions because they are brown, or white, or female or gay.  That is one of the many conceits that some people in politics have, particularly on the far right and radical left.

A lot of people see these things as being connected – that an openness to diversity means an openness to other cultures, as well as different sexual orientation. What do you think?

I think that’s true to an extent.

In terms of supporting a new, diverse Ireland, is there anything that you’d like to see happen before the end of the term of this Government?

I like to see us press ahead on gender parity. We made great strides, but there is much more to do, ranging from modernising some parts of our constitution to closing the gender pay gap, as well as equal representation in parliament and the boardroom. We have plans to modernise our laws on hate crimes. We need to do more for the trans community.  We need to improve sexual health services and fight the epidemic of gender-based and sexual violence. 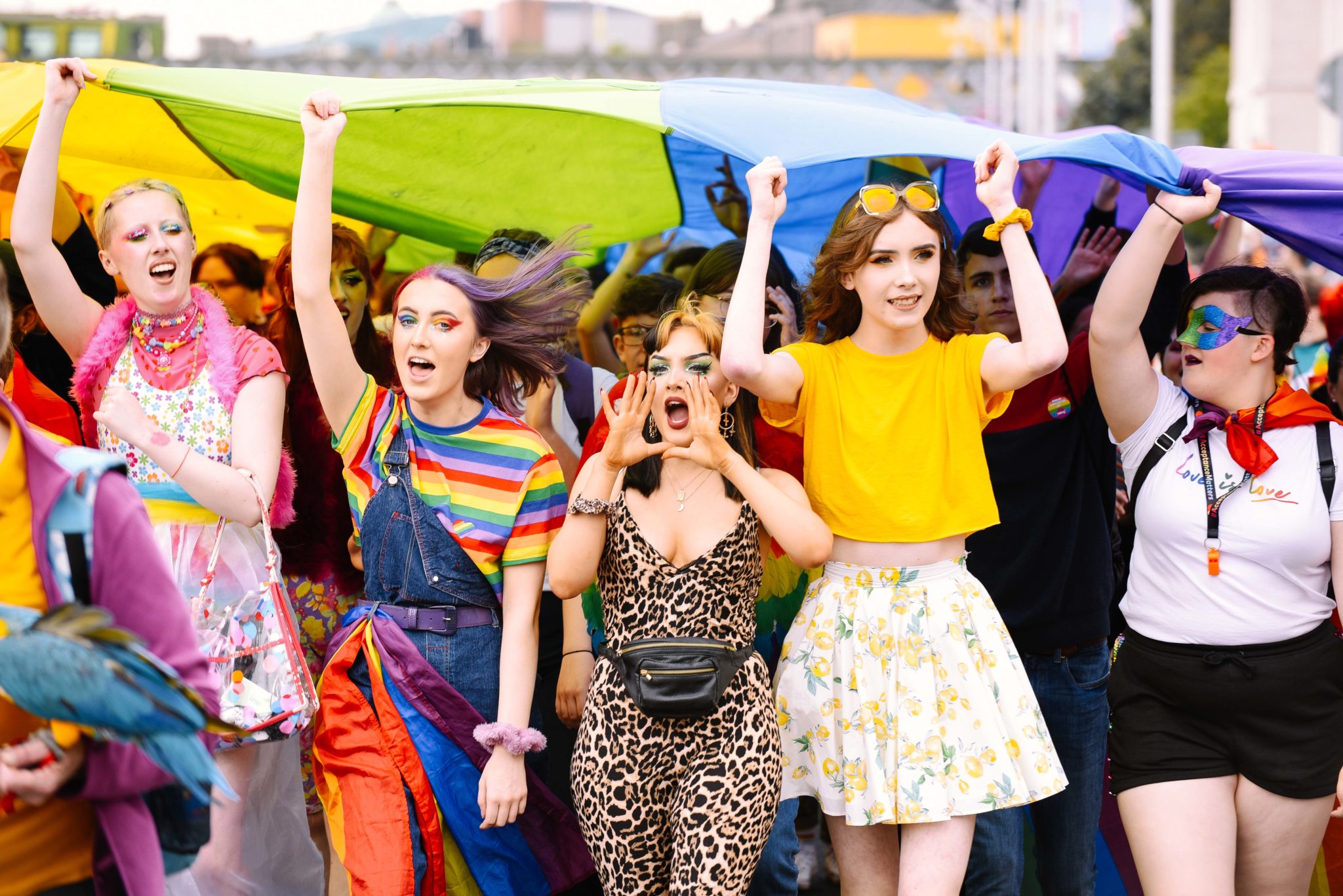 There is a lot of deeply unpleasant stuff happening in the world, with liberal values under attack in all sorts of ways. Does that worry you?

Yes. Liberal values and democratic values are in retreat in large parts of the world including parts of Europe. Populism and nationalism are on the rise. We see that manifest in Trump, Brexit and Marine Le Pen, to give just three examples. Nationalism is the view that people should be defined by a national identity that should be enhanced, and in many ways sets them apart from others. Populism in characterised by simple solutions to complex problems, demonisation of opponents, the idea of the corrupt elites versus the virtuous masses, the concept that emotions trump facts.  I think in an Irish context, populism and nationalism is most manifest in Sinn Féin. I think they would bring Ireland backwards. I hope I am not proven right about that.

Are you optimistic for the future in Ireland?

Yes. Very much so. We have lots of problems. I don’t need to list them. But I don’t think anyone can objectively argue that we aren’t better off than we were 20 years ago in the round, whether it’s living standards or personal rights and freedoms. And we are much better off than 40 or 60 years ago. The arc of history bends towards progress even if it doesn’t always feel like it.
I am also hugely enthused when I go into schools and colleges. Young people are so well educated, confident, articulate. Much more so than we were at their age. That has to give you hope.

And with the war in Ukraine on one side, and the threat of autocracy in the US on the other, among many imminent threats, what about the world?

I think there are three mega challenges – climate and biodiversity loss; an ageing population and the impact that will have on the need for healthcare, social care and adequate retirement income; and the fact that democracy and freedom are in retreat. I think we can overcome these challenges. The big opportunities I think arise from the development of new technologies like green hydrogen, robotics and artificial intelligence. Technology will help us solve many problems. It’s really exciting.

Read our full Frontlines LGBTQ+ and Longitude special in the new issue of Hot Press: