Live Report: Three's City Stages launches on Limerick's Cruise's Street
God Knows and MuRli of Narolane Records along with RTE's Tracy Clifford and performers Korey Power, Robert Dawson, Mel Maryns and Daqidexcel the launch of Three Ireland's City Stages initiative outside the Three Cruises Street Store in Limerick over the weekend. Picture Brian McEvoy No Repro fee for one use

The launch of Three All For Music's City Stages saw Irish buskers given a platform to promote themselves and their original music in front of an eager group of music enthusiasts.

The City Stages initiative – presented by Three, in association with Hot Press, AIM Ireland and Sony Music Ireland – is designed to support the next generation of Irish musicians, currently performing on city streets, and to progress their careers to the biggest stages in the country, opening for major acts at venues like the 3Arena and 3Olympia Theatre.

A grey backdrop hung over the city, as a curious audience crowded around Limerick's 3 shop, where an interesting stage was set up. A light drizzle didn't stop the lingering crowd, made up of kids and adults alike.

Kicking the day off was Brazilian native, Cork-based Mel Maryns. A few technical difficulties were encountered by the singer, pushing out the start of the set, but the vocal talents of Maryns ensured it was worth the wait. Starting off on piano, Mel built a beautiful foundation for her first track - a cover of Rihanna's 'We Found Love'. With stunningly breathy vocals, Maryns encouraged the crowd to sing along. They happily obliged. 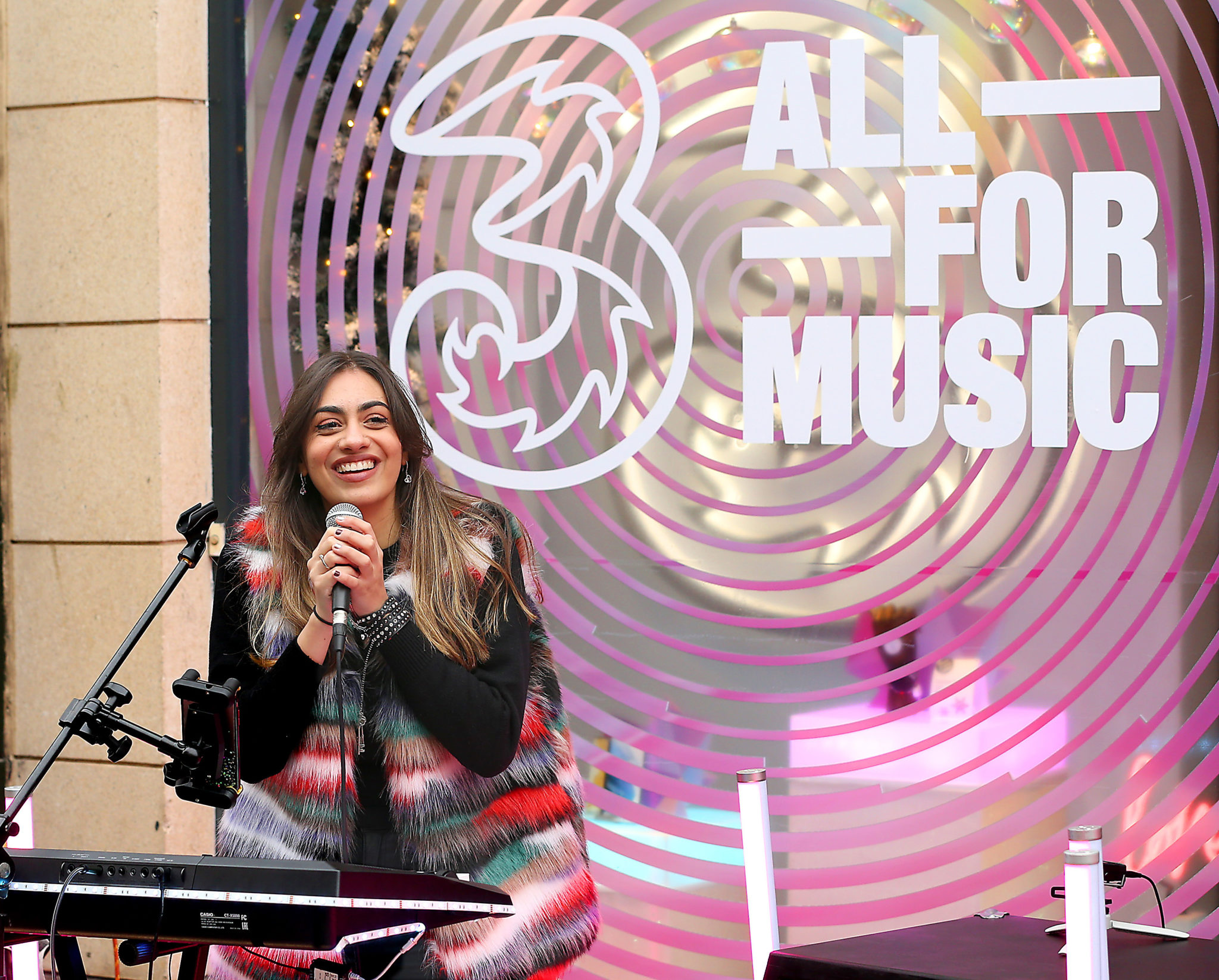 Mel Maryns at the launch of Three Ireland's City Stages initiative outside the Three Cruises Street Store in Limerick over the weekend. Picture Brian McEvoy. No Repro fee for one use

Maryns moved on to an original next, titled 'Final Kiss'. She informed the growing crowd of the meaning behind this track, saying: "It's about breakups where you find it hard to get out of bed after." Mel's ethereal pop vocal and her intricate piano work carried the performance. Next up, the singer brought the crowd back in time with an extremely well-crafted cover of Cascada's 'Every Time We Touch'. The crowd were hyped, dancing and singing along, even encouraging passers-by to stop for a boogie.

Swapping over to guitar, Mel moved to another original track titled 'Julie', which carried a 'no body, no crime'-like air. Finally, the singer chose an upcoming single, performed over a backing track. Demonstrating her charismatic stage presence, Mel had the crowd lapping it up.

Next up for 3 City Stages was Korey Power, another Cork-based busker. Immediately, Korey had the crowd in the palm of his hands, with his introductory banter. "Sing along if you know the words," he instructed, "and if you don't know the words... pretend." Starting off with a cover to ease his nerves, as he proclaimed, the musician strummed the chords to Elvis Presley's 'Can't Help Falling In Love'. At the end, there was a rapturous response from the crowd. 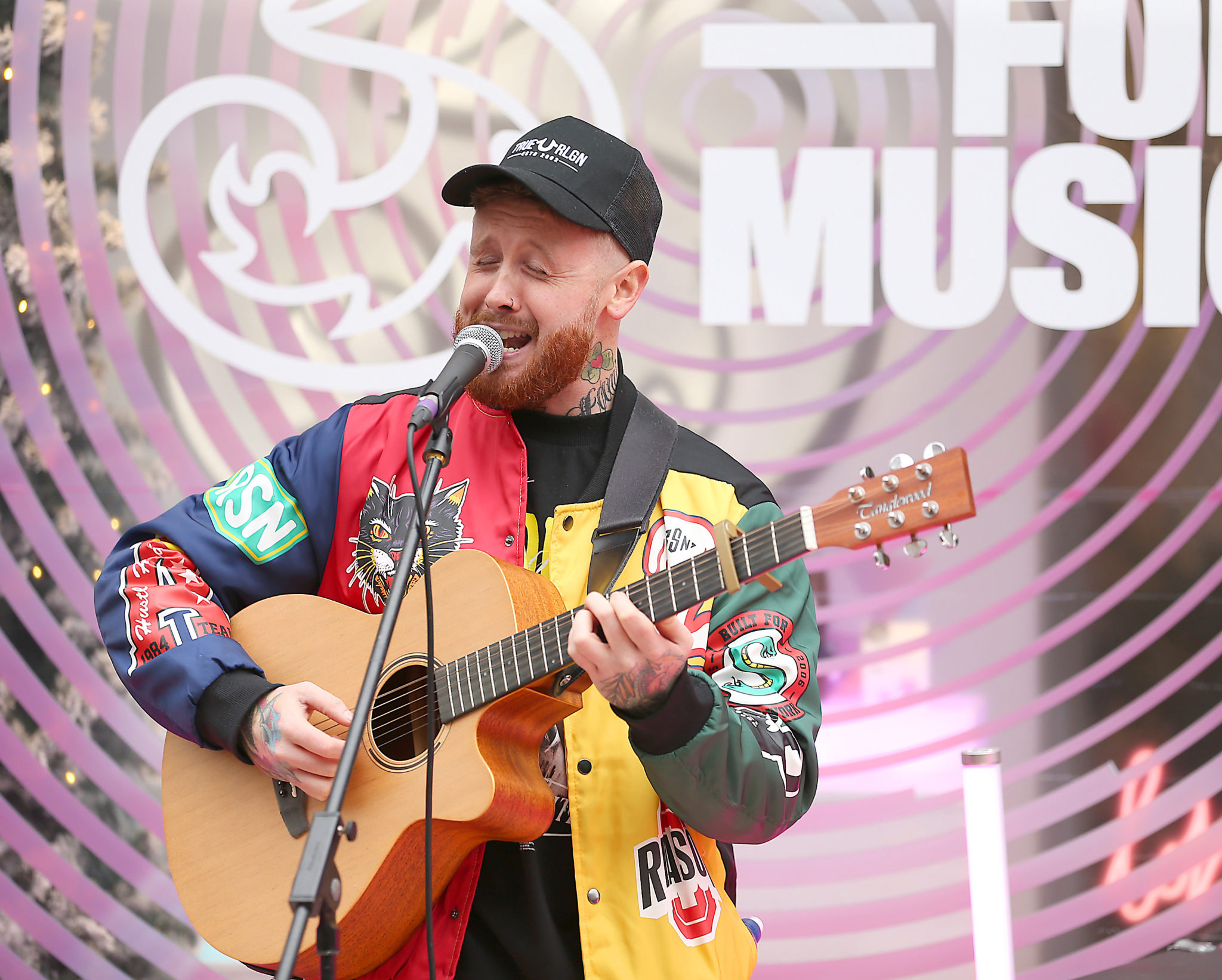 Korey Power. Picture Brian McEvoy - No Repro fee for one use

Power leapt eagerly on to his next track, an original titled 'I Wanna Know'. It's about, Korey explained, "when you like someone and you want to know if he or she loves you back." It was an opportunity to show off Power's unique voice.

'Iris' by the Goo Goo Dolls came next, Power making the song his own, with a little g bit of help from the crowd joining in. Finally, to close his set, the musician played an interesting mash-up of Ben E. King's 'Stand By Me' and Sean Kingston's 'Beautiful Girls'. Whooping and hollering along, the crowd clearly adored Power.

Rob Dawson was next up next, opening with a remarkable performance of Prince's 'Purple Rain'. Having proven himself a great singer, Dawson then switched into original mode, warning that most of his songs are 'depressing'. "It's better to be honest about this stuff," he insisted. The good news is that the lyrics justified the hype. 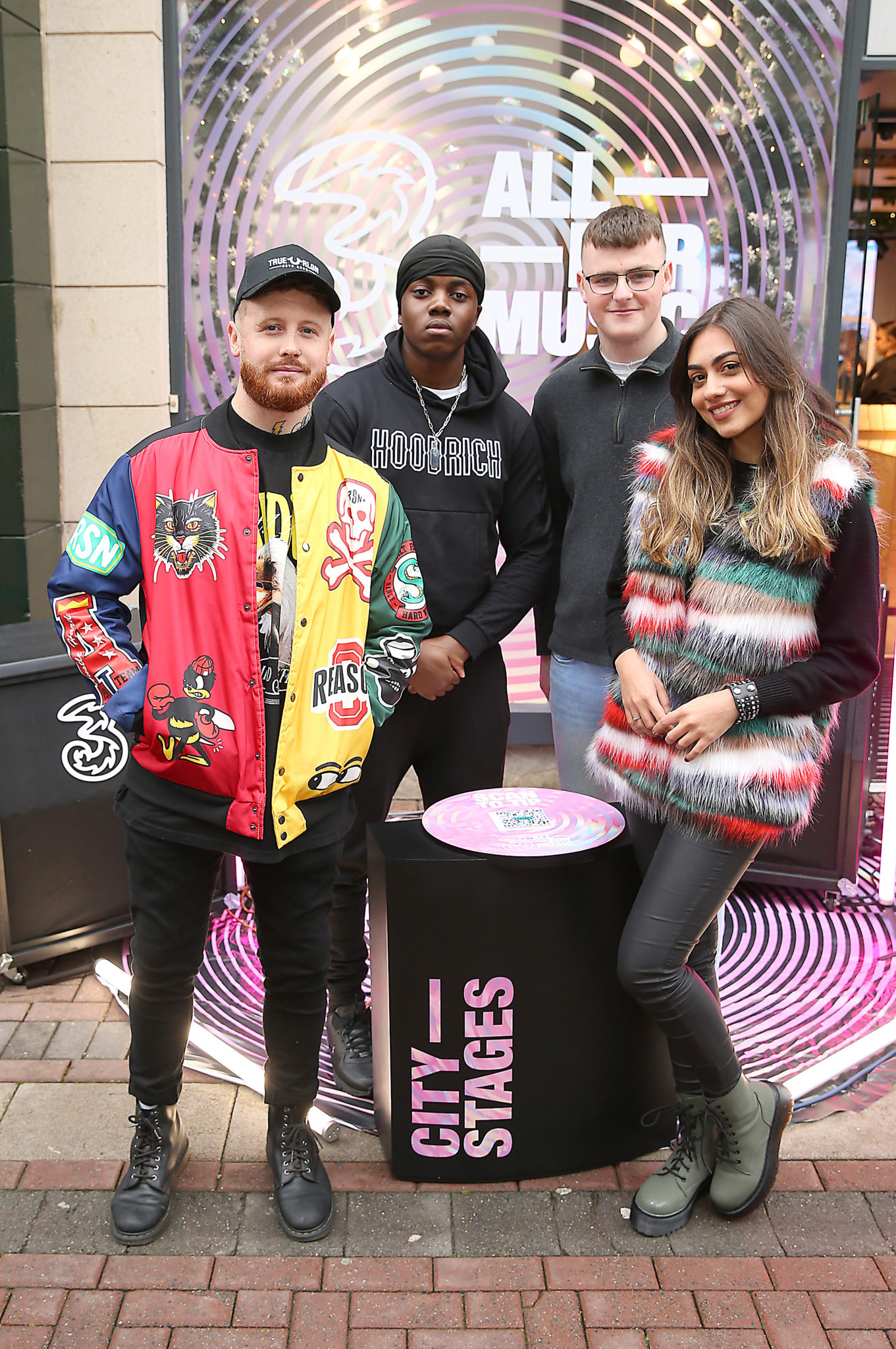 Rob also did a magnificent cover of 'Simply The Best' in the style of Schitt Creek's Noah Reid, with the delicate guitar strumming a highlight.

Following another original 'In The First Place' – this time using a backing track, Dawson did an incredible cover of Oasis' 'Don't Look Back In Anger' and honoured Limerick by closing his set with The Cranberries' 'Zombie'.

The final act – or so we thought – was local Limerick rapper, Datqidexcel. He opened by asking the crowd to move in closer before kicking off with "Uggy, uggy, uggy", with the crowd responding: "Oi, oi, oi." The rapper ran through a multitude of original tracks, carrying sick lyrics and bars over intricate beats. He was joined onstage by a friend, Lennz, who helped out on a couple of unreleased tracks, one which was laid over the beat of Missy Elliot's 'Get Ur Freak On'. You could tell straight away that this guy has amazing potential and will only get better as his confidence grows. For his first ever performance, this was a real success for the young, local rapper. 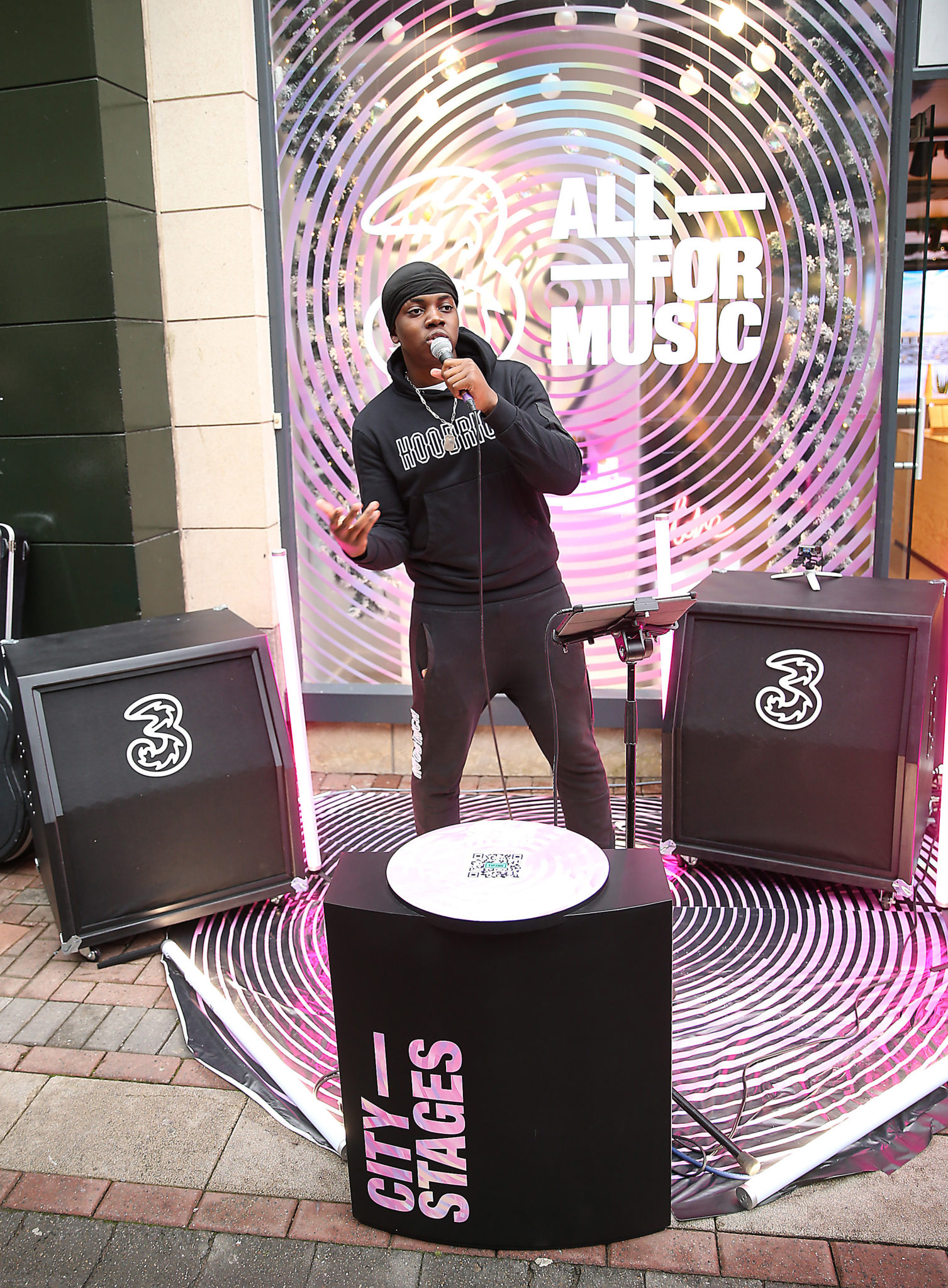 Daqidexcel. Picture Brian McEvoy - No Repro fee for one use

Onlookers thought the event was winding down, when half of the Dublin-based hit pop-stars Wild Youth, made an appearance. Lead singer David Whelan and guitarist and back-up vocalist Ed Porter performed a short set, including 'Next To You' and 'Through The Phone'. They didn't shy away from playing 'Modern Colosseum' – with its X-rated lyrics – before treating the crowd to a cover of East 17's 1994 Christmas No.1, 'Stay Another Day'. To close, the duo had to play their own famous hit 'Can't Move On', to the crowd's immense satisfaction. 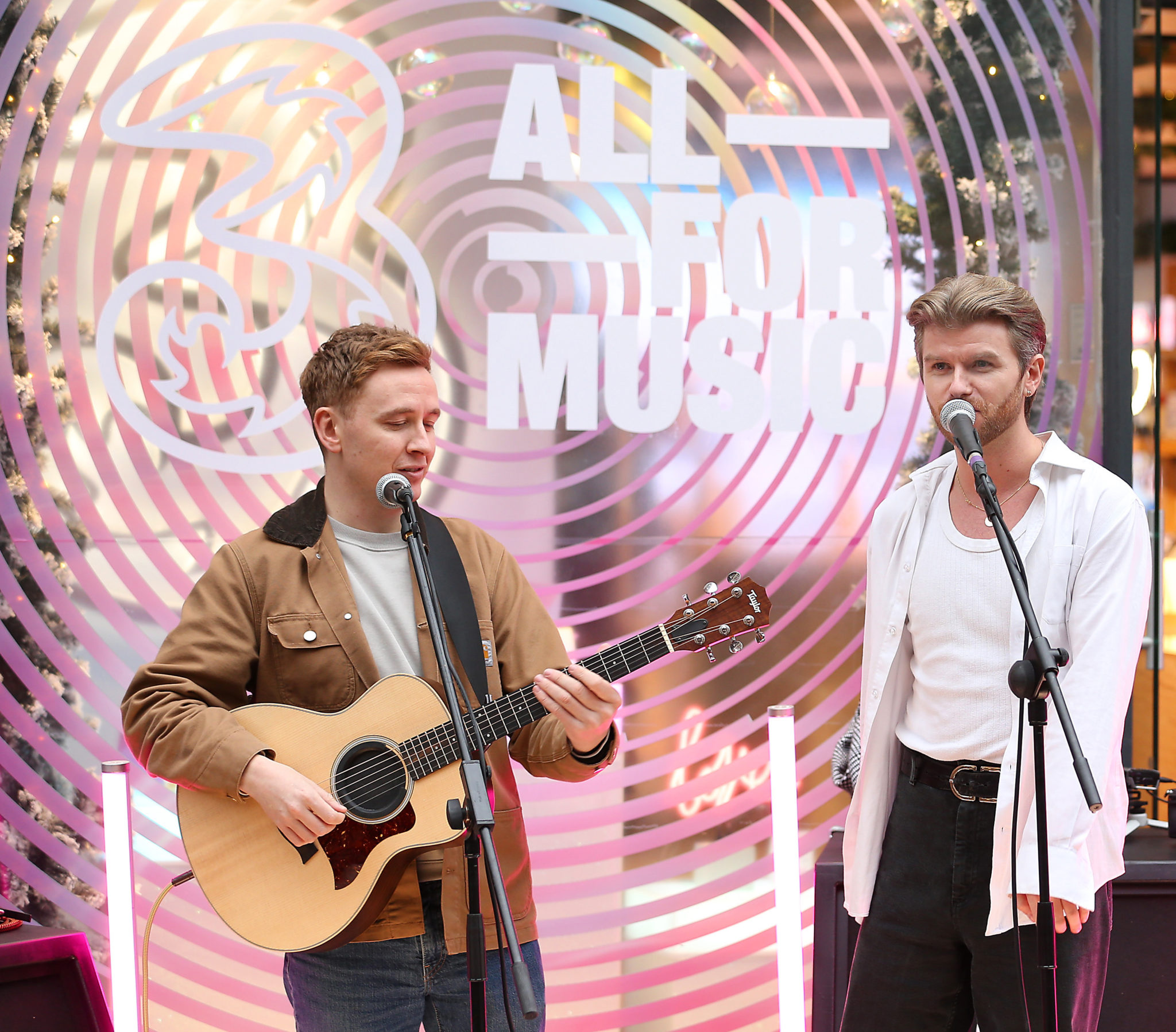 Wild Youth. Picture Brian McEvoy - No Repro fee for one use

"It's really awesome to see a lot of talent doing their thing," God Knows beamed. "Opportunities like this, you don't know what that means for someone who's just starting out, or what it's gonna mean for them going forward. It's like 'I've already got a crowd, so maybe I should keep going.' Sometimes, something like this can be the difference."

MuRli nodded along with his fellow ambassador, adding: "Especially for buskers, people don't always pay attention to them, and can to kind of just walk past them. Sometimes you take him for granted. But putting them on a stage where they're actually the focus here for the day, it's just amazing. Sometimes it can seem like every song someone is singing now is just a cover, but we're hearing originals as well. I mean, this really raises their levels as well, because they see this is their show. The city used to be the show, but now the city's coming to their show." 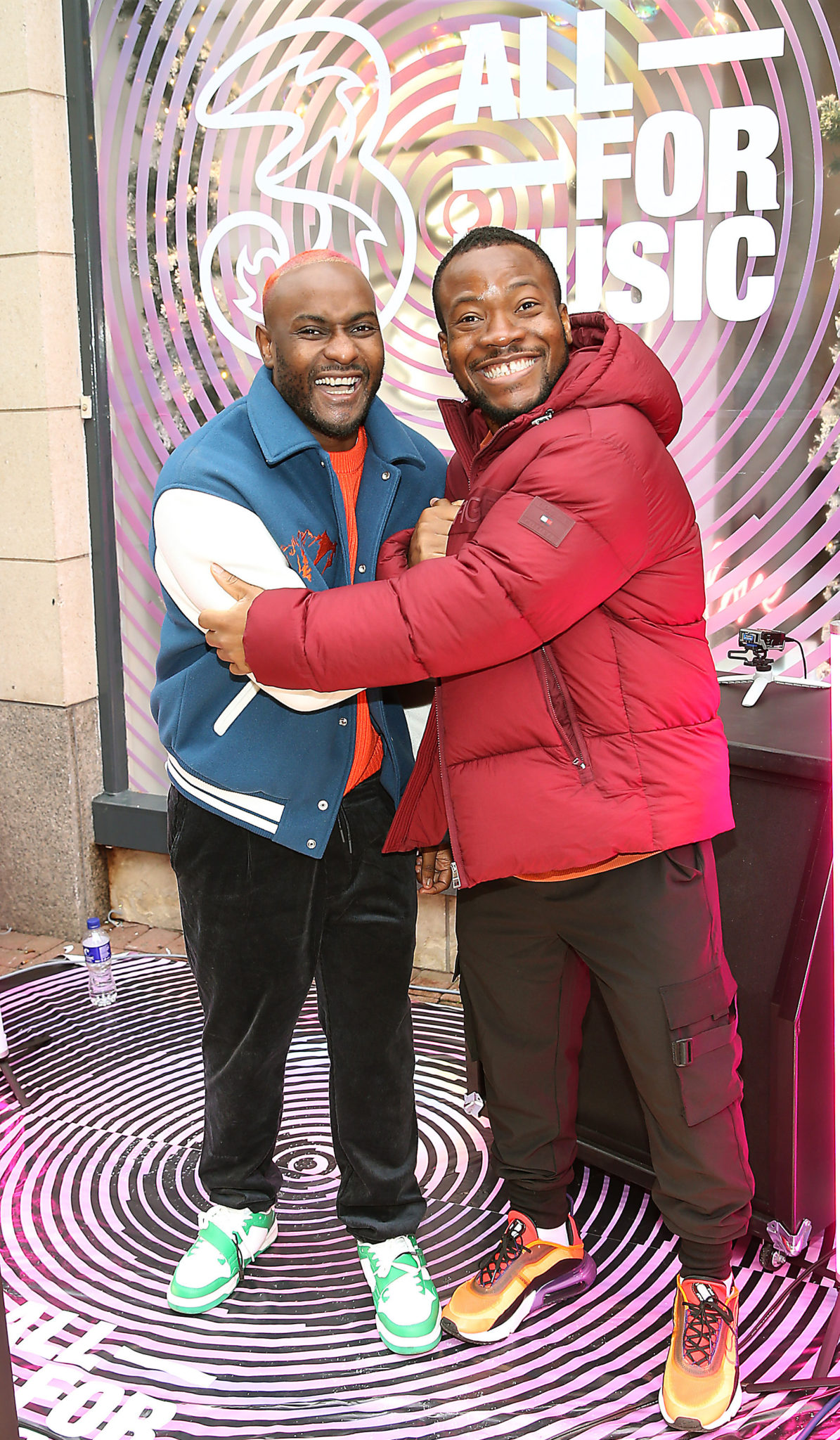 God Knows and MuRli of Narolane Records. Picture Brian McEvoy - No Repro fee for one use

The hip-hop artists turned their attention to Limerick next, sharing how they wanted to ensure Limerick was looked after when it comes to music.

"We always feel like Limerick sometimes gets left out of things," God Knows stated. "So for us, especially partnering with Three, one of the main things was making sure that we highlight Limerick as a focal point. We want to make sure Limerick's being seen and being heard. Especially for me, datqidexcel is someone I feel like is already a total package, but he's only like, 16/17 years old. He directs his own music videos, he does his recording himself. It's so great that I could make sure that he was a part of this, and I think that's really important, because when people ask us what we've done, at least we can say that we're making sure the next generation is looked after."

"When people will say there's something in the water, for us this is the water, right here," MuRli agreed. "People come here and they're gonna get a taste of what it is and they'll take it home. This is where it's happening."

City Stages will return to Limerick in January, and will tour Ireland over the coming months, providing a platform for buskers and emerging musicians to perform to new audiences and promote their music.