Just Mustard: "There’s always been a strong sense of music community. Everyone is trying to support each other"
Credit: Milly Cope

Hot Press joins hotly-tipped Dundalk noise-merchants Just Mustard on the road in the US with Fontaines D.C., where they discuss their remarkable new album and what they do and don’t owe to Sandra Bullock.

Just Mustard cannot recall the name of the bar. But they remember what happened when they and touring mates, Fontaines D.C., hit the town recently to celebrate their block-rocking tour across America. Drinks were had, dancing was attempted. There was even a singalong to Liffey eardrum-botherers Gilla Band. The citizens of Brooklyn had never seen anything quite like these boys and girls from the better land cutting loose.

“We went out with Fontaines the night they were on Late Night with Seth Myers. We were in Brooklyn, which was where their label Partisan is based. We had a night with the whole crew,” says Just Mustard guitarist David Noonan from a Best Western on the outskirts of Toronto, where Fontaines and Just Mustard played the previous evening.

“The owner of the bar was from Limerick. He turned on the TV and whacked it up full volume when Fontaines came on. We had Gilla Band playing for about an hour. That was the most celebratory night of the whole tour.”

Crossing North America with Fontaines D.C. in 2022 must be a bit like going on the road with U2 in 1987 or Nirvana in 1991. Obviously the Dubliners are not quite yet at that level. But the momentum behind them is breakneck. And, as they made their way across the US and Canada, they discovered third LP Skinty Fia had gone straight to number one. What a ringside seat Just Mustard, who were getting set to release their own new record, Heart Under, must have had. 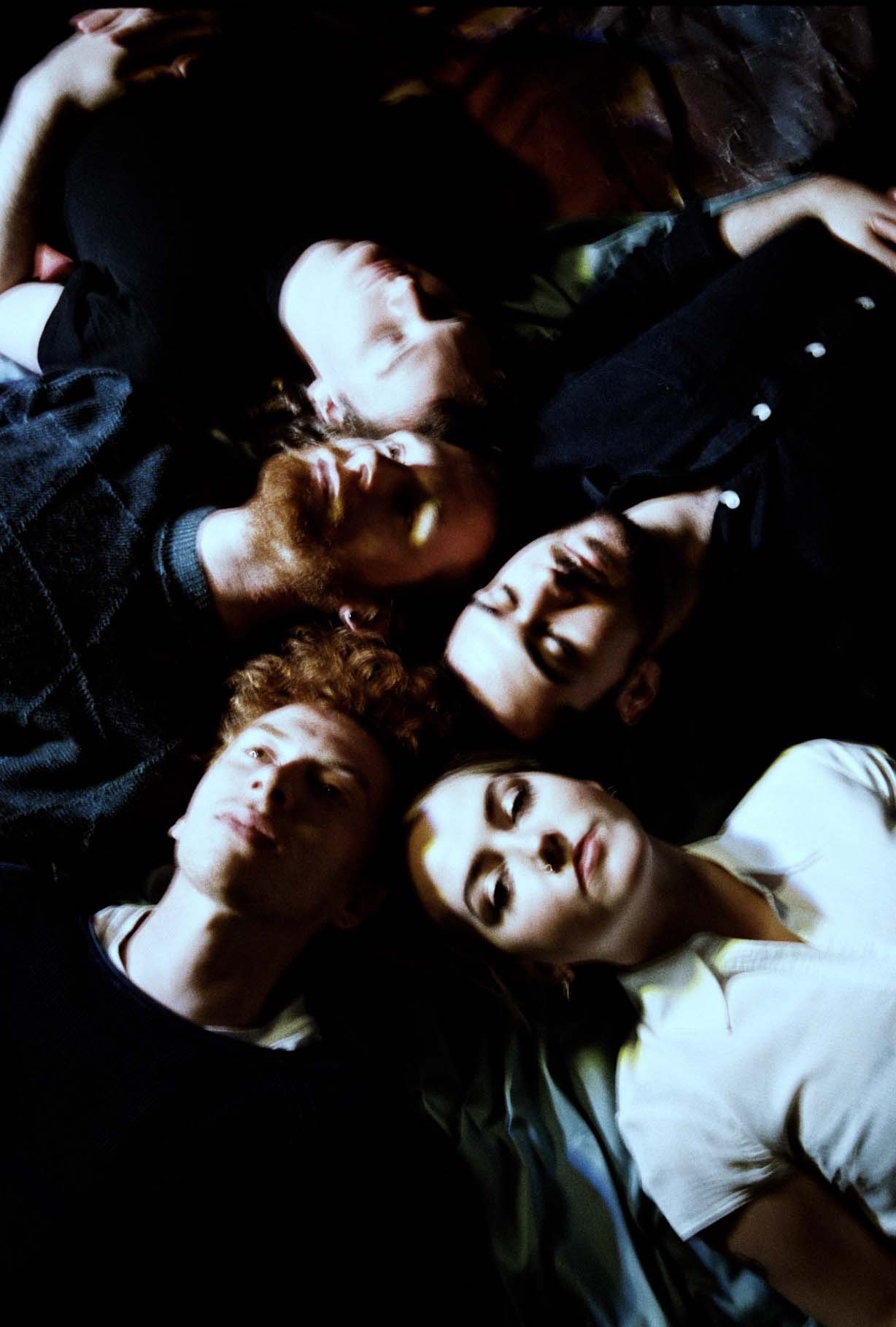 “It’s mad,” says singer Katie Ball. “Before touring with Fontaines we were at South By Southwest playing small bars. To switch between that and the first show with Fontaines in Madrid was fairly big. It was such a mad difference. To go from playing dive bars to big Fontaines stages.

“The crowds have been coming down early,” adds Noonan. “There are very few nights where it hasn’t felt really full. The crowd in Columbus was huge. Ohio was massive craic – screaming and shouting between songs.”

Just Mustard weren’t on hand, alas, when Fontaines learned they’d scored a one-two of Ireland and UK number ones. They were in separate touring parties, hundreds of miles apart. Still, they revelled in the achievement.

In a smaller way, Just Mustard are resonating too. Having open for The Cure at Malahide in 2019 and received a Choice Music Prize nomination for their debut, Wednesday, they’ve now signed to Fontaines’ label, the aforementioned Partisan, and have come roaring out with a thumpingly esoteric and irresistible second LP, Heart Under, released May 27.

It’s everything you would want of a great follow-up long-player. Where Wednesday gave heartfelt homage to the swirling, snowdrift guitars of My Bloody Valentine, the follow-up puts Ball’s voice front and centre. And while their debut was about evoking a mood and tone, here fuzzbox fretting is paired with songs of impressive dynamism. There’s lots of the untethered noize that is is one of their signatures – but now allied to hooks, melodies and some dazzlingly ambitious songwriting.

“Our plan was to make an album in 2020 and get it out,” Noonan recollects. “When the pandemic hit, there were vinyl delays and stuff. Partisan said, ‘There’s no point rushing – it’s not going to come out any time soon. Take your time.’ They gave us space to do that. We didn’t feel we were rushing it. We did the bulk of recording in October 2020 and spent from then until April finishing it. And then Katie re-did all the vocals.”

The five-piece are at the heart of a burgeoning scene in Dundalk, built around the label Pizza Pizza and bands such as Elephant and honorary associates such as The Altered Hours. Not that Dundalk is small - its population is heading toward 40,000. But for an urban centre removed from the traditional hotbeds of Irish music it punches above its weight.

“All our friends are in bands or doing their own creative pursuits. There’s always been a strong sense of music community,” says Noonan. “It’s very positive: there’s not anyone trying to better anyone else. Everyone is trying to support each other. Pizza Pizza came out of that thing – the idea of setting up something where we can support each other, chip in, help each other out. There was always that sense of being surrounded by bands and music.”

There is, he ventures, a bit of a “border county” identity that Dundalk plugs into – and which has informed Just Mustard.

“There’s a similar culture with Monaghan and Cavan. Definitely a kind of identity along the border. People in Dundalk are fiercely proud of their town. With the football team [Dundalk FC have twice reached the group stages of the Europa League] and the music scene. People are happy to be from Dundalk. When I was a teenager, it felt like you had to leave your own town to do well. In Dundalk, I never got that sense. The philosophy was let’s just do it here. That’s as valid as going off and trying to get other people interested.”

This perspective is rare and to be cherished.

“It helps a music scene. People can focus on doing their thing. You can just do it where you are. That’s cool. And we were lucky enough to have the Spirit Store [a 300-capacity venue in the centre of town]. When you’re a teenager or starting a band – you wanted to put on a show or put on your own night in the Spirit Store. That’s the end goal.”

One maddening aspect of their story is the way in which they have been typecast as shoegaze revivalists. There’s some of that in their sound (though a lot less on the new LP).  “Our two biggest references on Wednesday would have been the Warpaint self-titled album and Primary Colours by The Horrors,” says Ball.

“We were trying to mix a couple of things, including shoegaze,” continues Noonan. “Bloody Valentine they had that mix of electronics and guitars. That was the biggest influence for me – how they arrange their songs.”

“With the new songs we wanted to have a lot more clarity,” ventures Ball. “And some space in the instrumentation. More clarity in the vocals and lyrics. We couldn’t just remake Wednesday again.”

They were shocked, they say, at how far they have come – and with the degree to which their music has taken on a life of its own.

“I was incredibly surprised,” says Ball. “We had 300 copies of Wednesday initially printed. We thought they’d be in a shed and we’d be trying to get rid of them for ages. We only thought of trying to sell it at the Spirit Store. I didn’t know anything else about Irish bands or the Irish music scene. I didn’t even know what the Choice Music Prize was. And then we got nominated: what the hell? I remember sending records to America. We don’t even know people – how do they know us?”

Every great band has an origin story. And while Just Mustard were already three years on the go and with a growing fanbase, part of their journey to prominence includes that Cure gig in June 2019, where they shared the bill at Malahide with The Twilight Sad and Ride. Kicking off with Ball’s plaintive singing and a torrent of Just Mustard guitars, this was an afternoon to remember.

“We met Robert Smith afterwards. He so nice,” says Ball. “We got to watch The Cure which was class too. It was a proper big day out.”

“Robert Smith cares a lot about lineups,” adds Noonan. “You get that sense off him: a genuine love for music. You feel that.”

The group claim not to recall the origins of their name. Hot Press shares the arguably niche theory that it’s from the ’90s Rom-Com While You Were Sleeping and a scene in which Sandra Bullock’s character, having ordered a hot-dog, yells “Just Mustard!”

“I don’t know where it came from  – it’s a mystery,” says Ball. “Sandra Bullock shouts ‘just mustard?’ Okay, we got it from Sandra Bullock.”

• Heart Under is out now.