Embarking on tour in the wake of their freshly released second album, Irish rockers Just Mustard stopped in Dublin to headline The Academy on Friday night.

Experiencing Just Mustard’s moody noise rock feels like driving through a gloomy canyon with the windows down — a ride which their Friday night Dublin crowd had the opportunity of tagging along for. Following their recently released sophomore record Heart Under, the Dundalk neo-goth quintet took to The Academy stage to display their swarming sound, proving powerful control of their instruments before a sea of swaying and enthralled fans. 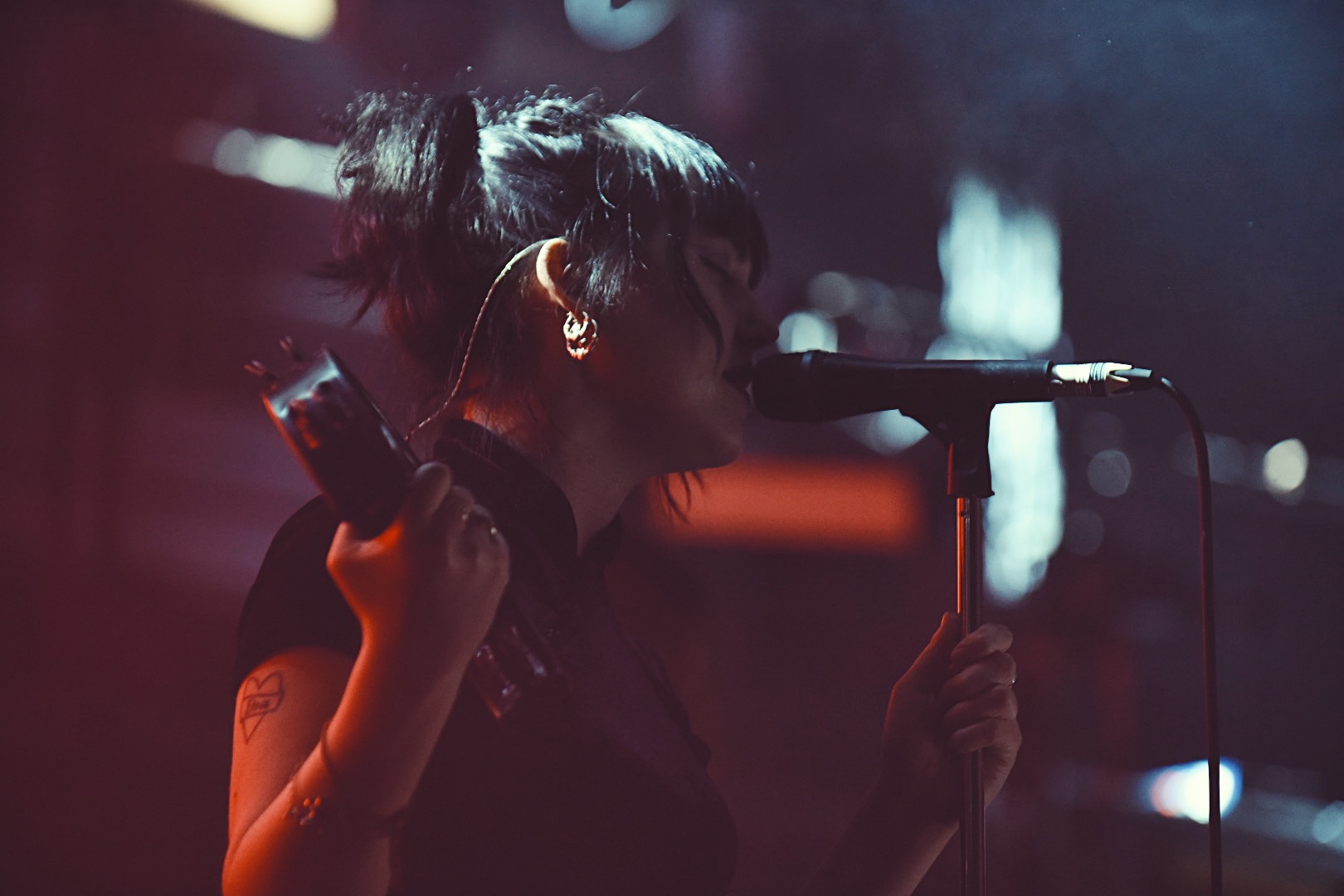 Support from dazy rocker Elaine Malone sets the scene for the night. The Cork songstress is fashioned with a dazzling Fender Jazzmaster and joined by her backing band, blurring the boundaries between bluesy rock and early shoegaze rock. She weaves through blissful choruses, trading in strings for the clarinet on ‘You,’ and unleashing a captivating falsetto.

We’re thrown into psychedelic scenery from note one of Just Mustard’s set, kicking things off with their stand-alone single, ‘Seven.’ The band display a fitting moody temperament under even more fitting, blood red lights; vocalist Katie Ball stares out beyond the dark expanse of the audience as her reverb-drenched angelic voice relays the lyrics, “Does my head in, bless me, there’s a god again in my head.” The beat accelerates as guitarists David Noonan and Mete Kalyoncuoglu move through an eerie, doom wave hook. 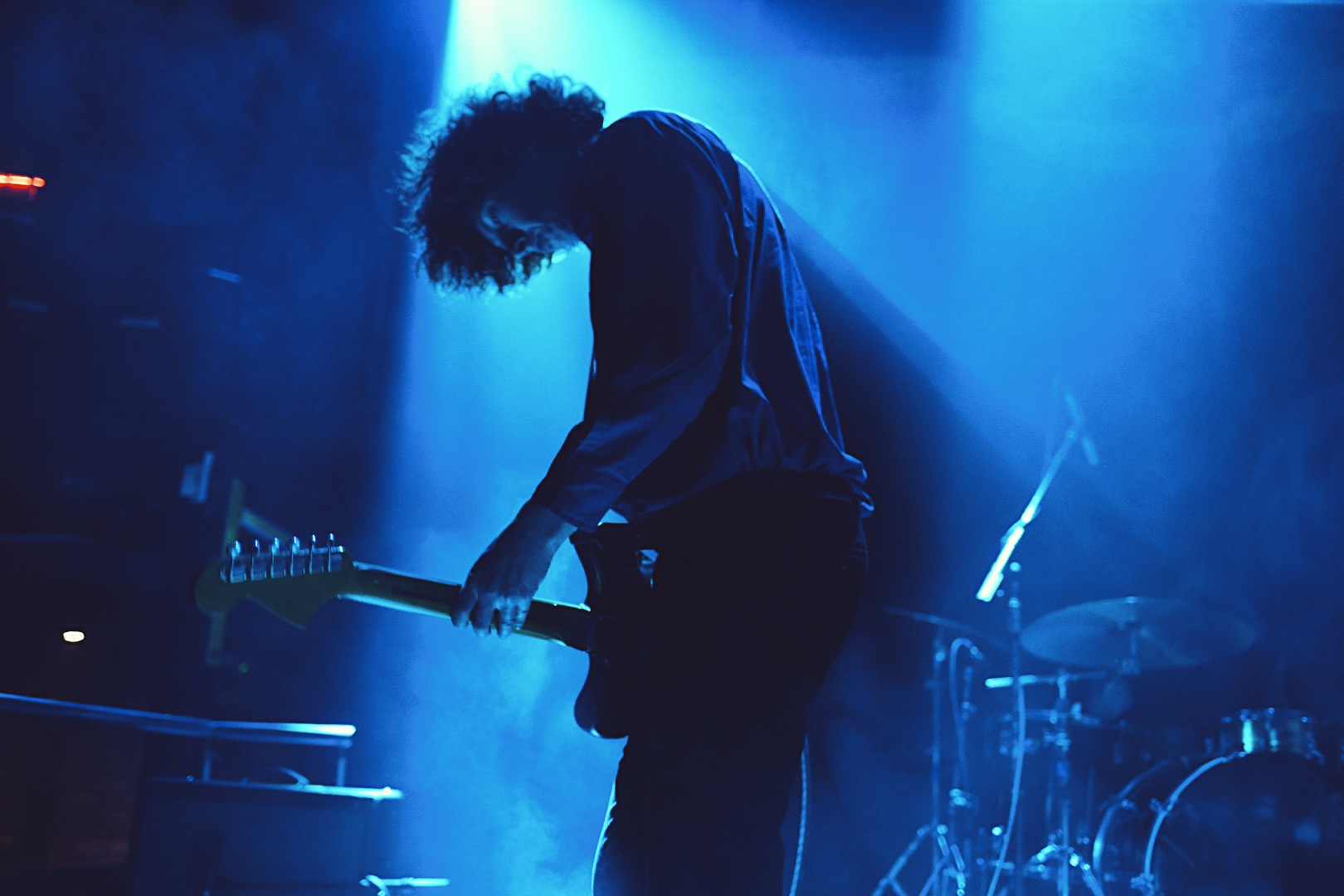 The room spins to the wistful tune of ‘I Am You,’ as the vocalist demands the unanswered, “Can you stay, stain my lip? Can you change how I think? Can you change my head?” A bending bassline, courtesy of bassist Robert Hodgers Clarke, punctuates the intense, fierce drone of Shane Maguire’s heavy-handed drumwork.

The crowd can’t help but sing along to Ball’s radiating vocals on ‘Early,’ as her siren tone works its enchanting magic over doubly distorted strings. The singer pulls out a tambourine for ‘Mirrors,’ as Noonan jumps in to provide harmonious backing vocals. Dazzling shoegaze synths decorate the melody, pushed forward by a hollow, driving drumbeat. 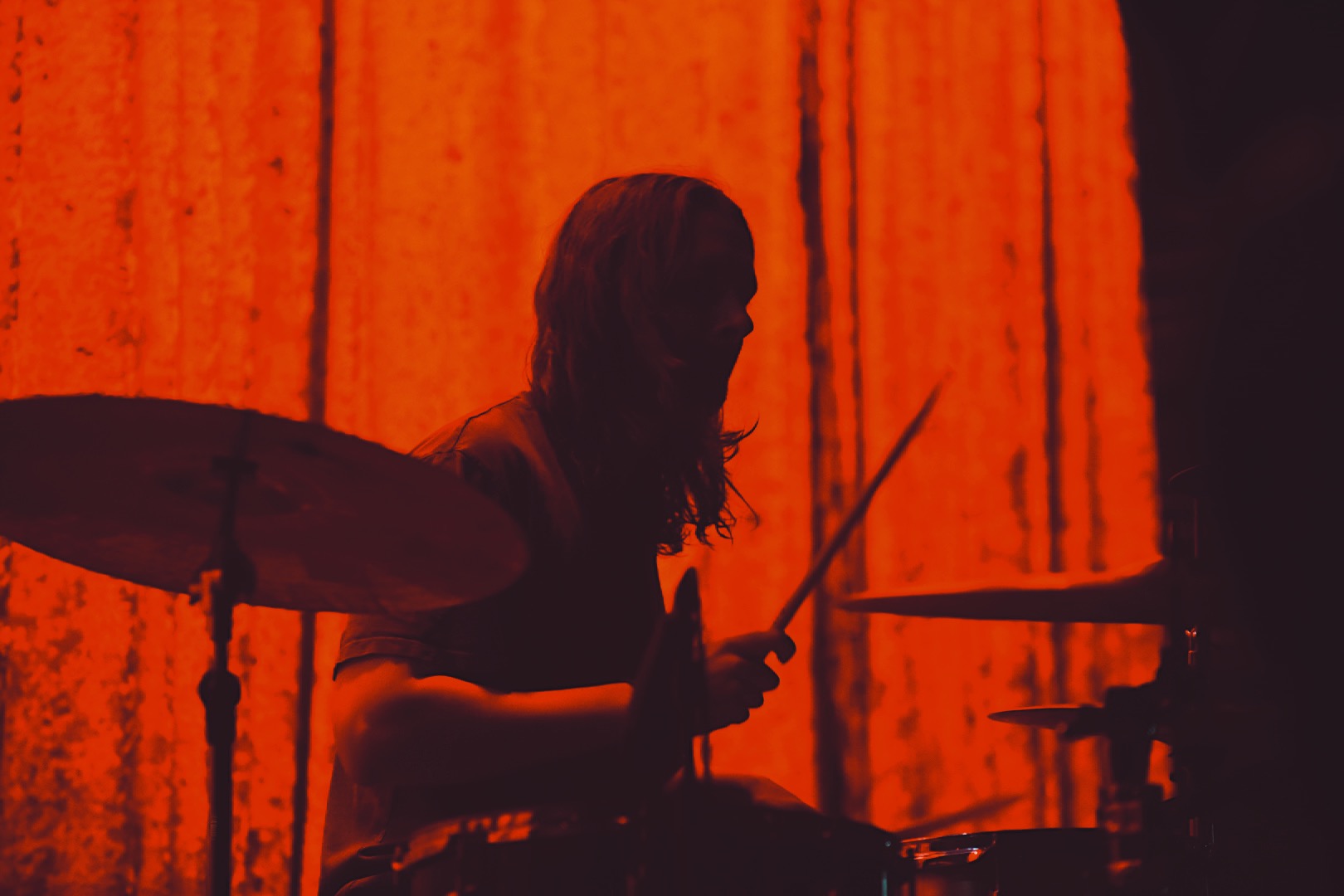 Just Mustard makes use of their instruments beyond basic function, utilising them as tools to enter a transonic portal. ‘23’ builds a tower of sound as my friend points toward the stage and says, “I was wondering how they created that sound.” He’s referring to Kalyoncuoglu, the face every gaze in the room falls upon as the guitarist wields a bow across the strings of his guitar, producing a gnarly howl that snakes around Ball’s enigmatic vocals. She incessantly chants, “Did I know you?” before the tower crumbles.

The jagged rhythm of ‘Frank’ is pieced together by its more atmospheric latter, ‘October.’ Ball’s piercing high notes slice through the haunting texture of the track’s dense wall of guitar-crafted sound, producing a moment of captivating, can’t-turn-away horror. 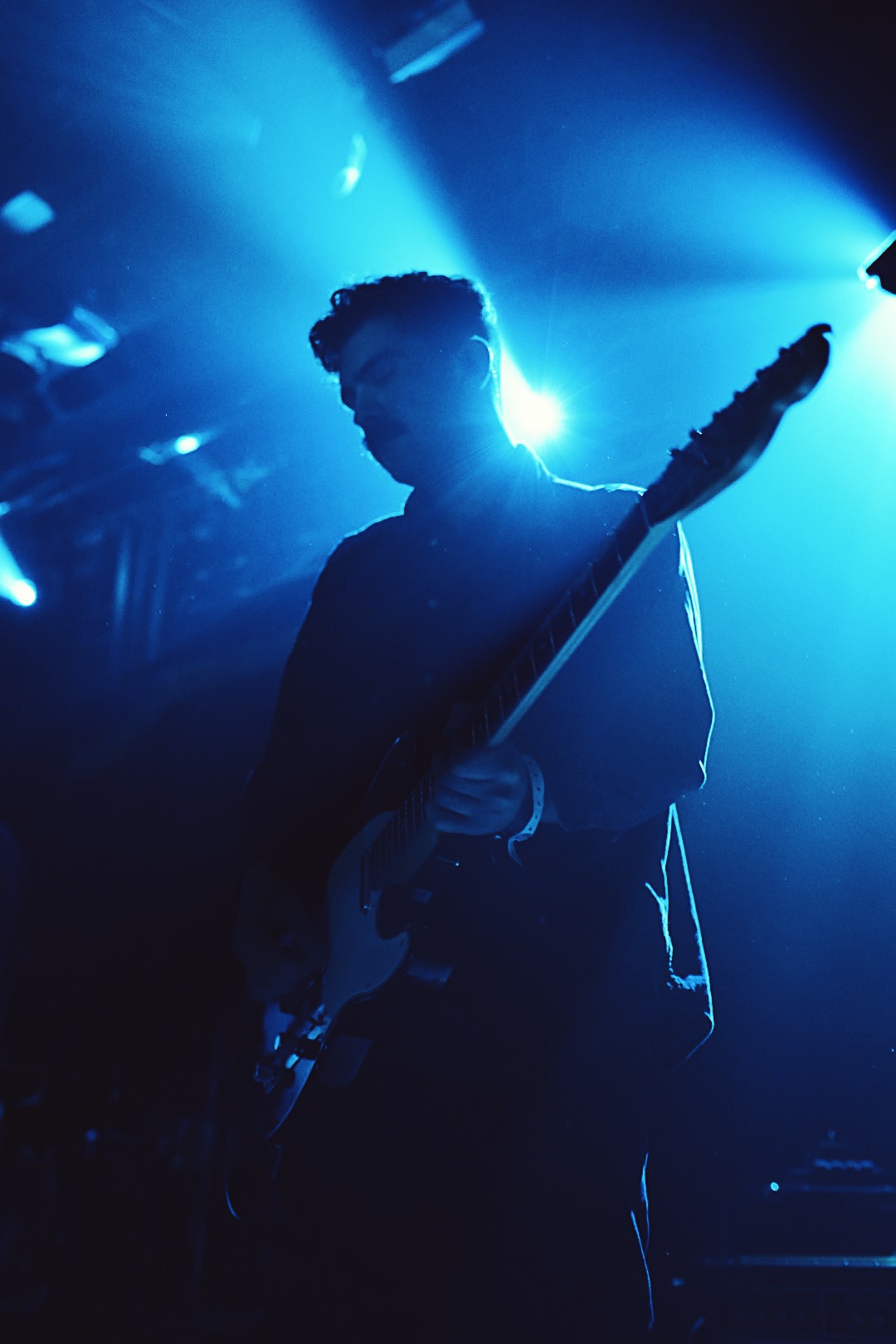 “I’m inside it, I have been going backward, still sitting,” Ball sings on ‘Still,’ where a hypnotic bassline reels their audience in. Even when we’re enveloped by the sound of Just Mustard, the grasp is never tender; ‘Still’ evokes a tension held in this listener’s throat until the outro, when crashing instrumentals offer that final release. 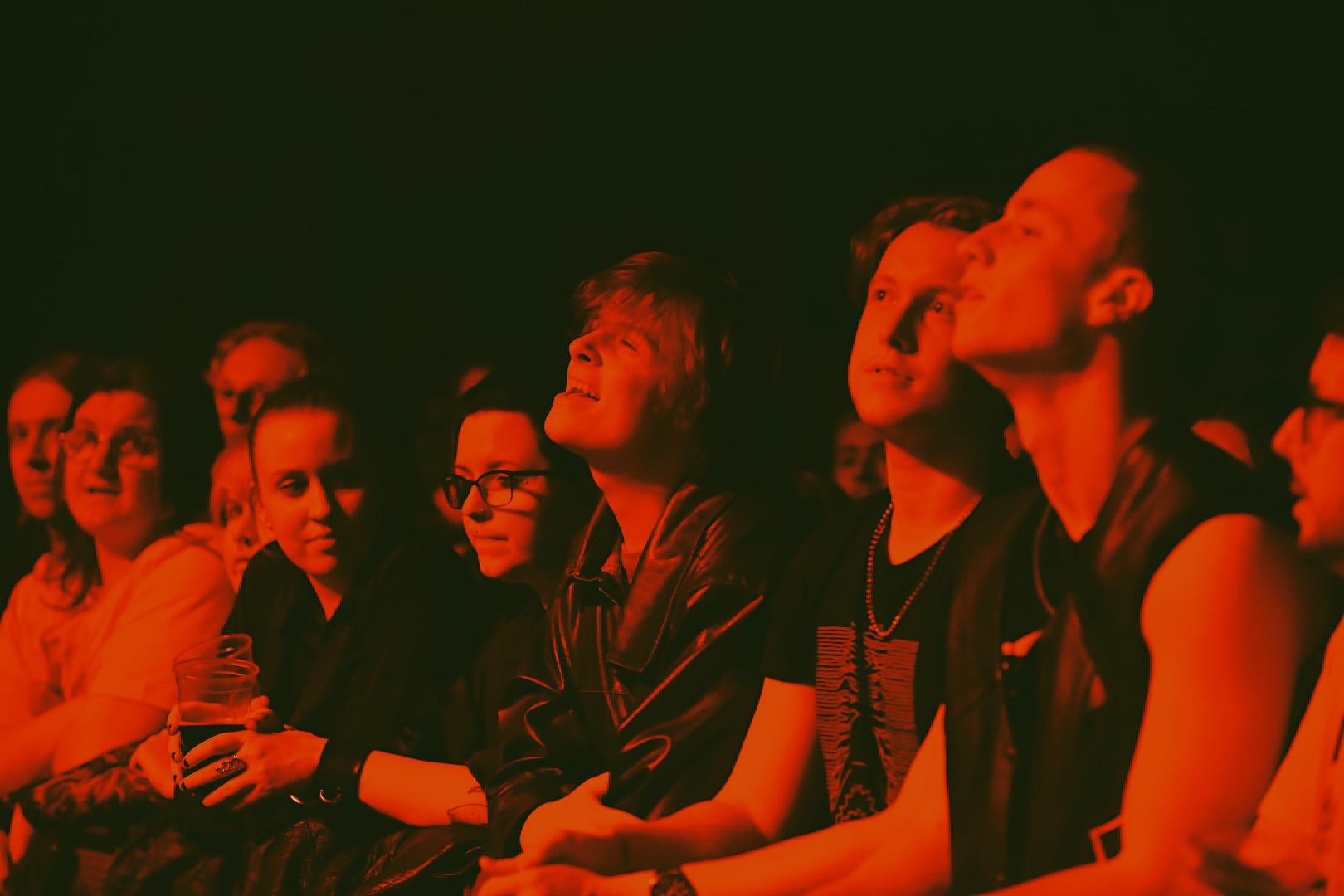 Just Mustard drags their audience through their otherworldly sound, hand-feeding us moments of peace through brief song to song transitions. They say their goodbyes with a dazzling thrill in the shape of ‘Seed,’ as Kalyoncuoglu and Noonan play out metallic guitar notes with the song’s titillating rise and fall. Ball’s vocals are seductive and twisted, breaking through layered sonics clearer than ever and leaving us longing for more.

The band shuns goodbyes in favour of a cool walk off the stage. Not long after they disappear, the crowd, still stuck in place, erupts into pleas for “one more tune.” It’s an invocation which Just Mustard rejects – they are long gone, leaving us amongst the chaotic rubble of beautiful destruction.