"Pat was a lovely person to work with – thoughtful, gentle, committed and always a good laugh," says Hot Press editor Niall Stokes. "He was also an excellent bass player, precise and musical while being well capable of holding down a meaty groove..."

The news comes less than a year after the tragic death of Ak Kennedy, Sacre Bleu's lead singer.

Sacre Bleu were considered real contenders on the Irish scene in the late 1970s. They played a fiery brand of rhythm ’n’ blues, and were seen by many as logical heirs to the mantle of The Boomtown Rats, as the latter took international flight. They worked with some of the best operators in the business, with the late Dave Kavanagh – who later handled the affairs of Clannad and then Celtic Woman – in the managerial seat. They also had U2 manager Paul McGuinness as agent, before his main charges took off.

However, Sacre Bleu's early promise didn’t lead to the kind of major label deal that would have set them on the high road. The band split up – some would say prematurely – in 1980.

In addition to Courtney and Kennedy, the original line-up of Sacre Bleu featured Dick Doyle on guitar, Frankie Morgan on keyboards, and Albert Cowan on drums.

A graduate of University College Dublin, Courtney went on to become a teacher, as well as an accomplished artist – and was particularly well-known for his paintings of James Joyce. 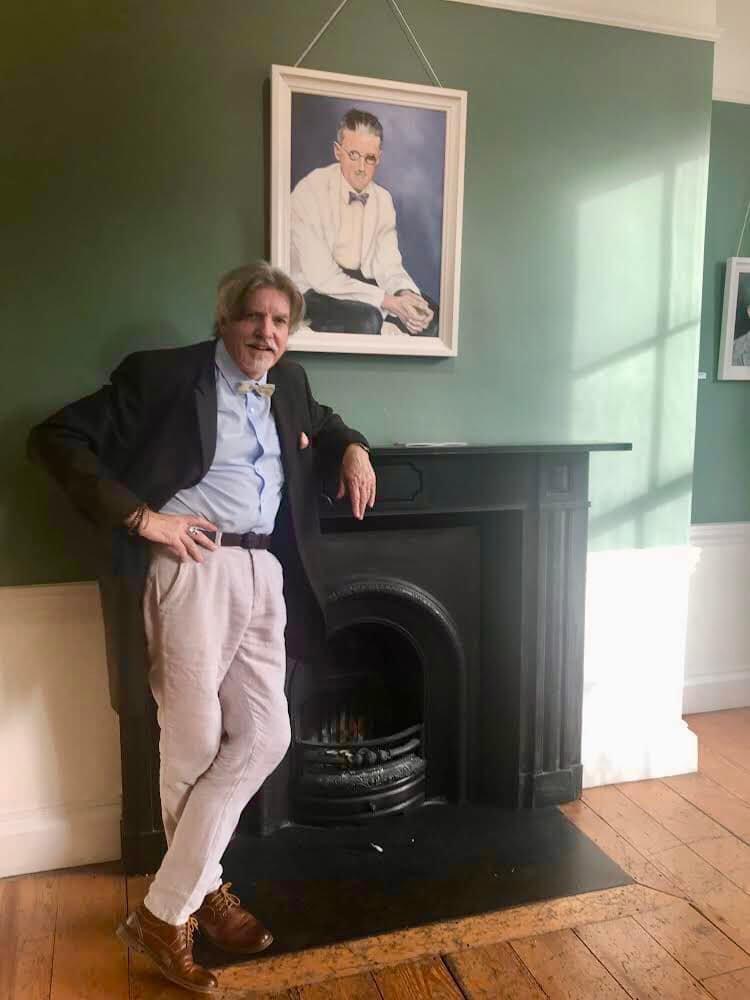 “It is a really sad day,” Niall Stokes said. “I remember recruiting Pat as our bassist when we decided to go fully electric with Eyeless, the band that my brother Dermot and I were involved in back in the 1970s. We had a good run, and enjoyed some great times together. Pat was a lovely person to work with – thoughtful, gentle, committed and always a good laugh. He was also an excellent bass player, precise and musical while being well capable of holding down a meaty groove. He also had a great head of hair!

“He went on to play with Sacre Bleu – in the slightly punkier moment of which some of the hair had to be sacrificed, but not too much! – and it looked for a while as if he might just crack the big time in that context. But it wasn’t to be.

“Pat had a real, enduring interest in all aspects of culture and an inquiring mind that refused to accept conventional wisdom or limitations. That made him an endlessly interesting person to talk to. But a smile was never far off with Pat. He had many lovely personal qualities, but chief among them was that he made the people around him feel better – about themselves and about the world! He will be greatly missed by everyone who knew him."

"Mary and I have known Pat for many years, both on and off stage," he told Hot Press. "Pat was well known in the music business as being an exceptionally good musician, and a decent and a generous human being who greeted everyone with a beaming smile. His genuine sincerity evidenced the truth of his good nature.

"I had the pleasure of working with Pat again during his recent exhibition of paintings, and we shared a lengthy and humorous chat over coffee in my studio. He was very well known in education circles for his commitment to decency and for his work to prevent bullying in schools. Pat will be sadly missed by the wide range of people who knew and loved him. Sincere condolences to his family at this difficult time."

"My great friend Pat Courtney passed yesterday," he wrote. "A wonderful father and partner, a lifelong Joycean, a professional musician, an artist of esteem, an exceptional teacher, an innovator in all areas. Great memories."