Rosie Day: "Girls are masters at being icebergs – you only see what’s on the surface, when there’s a whole other thing going on underneath"
Lucy O'Toole

Since being selected as one of Screen International's Stars of Tomorrow in 2013, Rosie Day has been making waves across TV, film and theatre. Now she’s entering the book world with Instructions For A Teenage Armageddon – a call to arms for teenage girls, which features contributions from Naoise Dolan, Gemma Styles, Sara Pascoe and more. Rosie discusses teenage mental health, her efforts to empower young women, and taking on the role of Cilla Black in the upcoming Brian Epstein biopic, Midas Man.

She may have just released a book centred on the trials, tribulations and joys of being a teenage girl, but award-winning English actor Rosie Day admits that her own adolescent years were something she was far more interested in “rushing through” at the time.

“We moved around a lot, and I went to lots of different schools,” she tells me. “And I was acting, so I’d go away and film quite a lot. It’s not easy to be the kid who’s doing something different. That’s the same for all child actors – I don’t think any of them had the best time at school.

“I was really desperate as a teenager to be an adult,” she adds. “I think that’s because I was surrounded by adults at work, and I loved work. I just wanted to get through my teen years, and be an adult. Obviously, now I’m an adult, I’m like, ‘Well that was a mistake!’”

Although her current status as one of the UK’s most hotly tipped actors has been keeping her busy in recent years – appearing in the Golden Globe-nominated Outlander, as well as All Roads Lead To Rome, Down A Dark Hall, The Seasoning House and more – she’s also found time to work with teenage mental health charity stem4.

“We go into schools, and we talk to a lot of teenagers,” she explains. “And, really, it’s never been bleaker for them. My work through that is what inspired the whole book.

“We always open with, ‘Who here has mental health?’ And like four people put their hand up, in a room full of 300 kids. Because they don’t know that they have mental health, in the way that they have physical health. That’s always something that reminds me why I’m doing it.”

As she found out through her work, the mental health crises of teenage girls too often fly under the radar.

“In 2018, I woke up, and saw an article in The Independent,” she reflects. “I remember it really vividly. A big study had just been done of teenagers – and there was this statistic, that one in four teenage girls self-harm. That’s literally a quarter of a population. I just thought, if it was any other demographic, that would get more attention. But because it’s teenage girls, and it’s wrapped up in the idea of teenage angst, nothing was being done about it.

“I think girls are better at hiding things than boys. Boys’ behaviour comes out maybe in a more obvious way, but girls are masters at being icebergs – you only see what’s on the surface, when there’s a whole other thing going on underneath.”

Her experiences playing teenage girls on screen also influenced her approach to Instructions For A Teenage Armageddon.

“Their representation is normally written by old white men, who’ve never been teenage girls, and the scripts are terrible,” she says. “I just got so fed up. I thought someone needed to be like, ‘Here are teenage girls. They’re amazing. Give them a chance, and do something to empower them.’”

So that’s exactly what she did – with the help of 30 inspirational women from various walks of life, who all contributed personal essays and insights to the book.

“We were all thinking of our younger selves,” she notes. “That was always in my head – what did I want to know when I was younger, but wouldn’t ask? We wanted it to be as inclusive as possible. We wanted anyone to be able to pick it up, and take something from it – including men! We’ve had a couple of dads who have read it, and that’s been really lovely. The bright pink cover might put them off at first, but hopefully they’ll pick it up.”

As a book targeted at girls in secondary school, Rosie reveals that she had to fight to have certain topics included in the book.

“For me, we had to cover consent,” she states. “That was a big thing. How do we talk to 12 year olds about sex? I was like, ‘We’ll find a way!’ And it’s not just sexual consent. It’s all kinds of consent. Letting young girls know that they can say no in life is so important.

“The other topic I fought for was boundaries, and staying safe as a young woman,” she continues. “While we were putting the book together, the Sarah Everard murder happened. I spent eight years living literally where it happened. So when that happened, I was like, ‘We need to put something in about this.’”

Addressing wider societal issues in the book was equally important to Rosie.

“I wanted the book to reflect our society,” she remarks. “I do believe that teenage girls can make a change. We’ve seen it in Greta Thunberg! So I wanted to make a book that would make them feel like they’re aware of everything that’s going on.

“I didn’t feel like I should be the one writing about racism, or transphobia, because that’s not my lived experience. So we brought on some amazing contributors, like Bel Priestley, Maxine Heron, and Natalie and Naomi Evans who run Everyday Racism, which is such a great platform. We wanted it to be reflective of a teenage girl’s experience now.”

As cinemas and theatres reopen, Rosie has made it her mission to carry the central ethos of Instructions For A Teenage Armageddon into the various other facets of her career.

“I write screenplays and stuff like that as well, and telling young women stories is my priority – and I think it will be for a long time,” she shares. “That’s what I really want to do. Similarly, I guess, to what Greta Gerwig has done, but for slightly younger girls.

“And I’d like to do more Teenage Armageddon-style books. We’re also trying to set up Teenage Armageddon as an empowerment resource – as an actual website, with lots of guest writers. That would be a huge achievement.”

As she notes, when working in a creative industry, there’s “never really an end goal.”

“You get people who are like, ‘I want to win an Oscar, or a BAFTA!’” she smiles. “But they’re so subjective. And I think most people get there, and go, ‘Well, that wasn’t what I thought it was going to be.’ When they put up billboards of the Teenage Armageddon book, I saw a couple in London, and it was the weirdest thing. I was staring at it, but my brain couldn’t associate that with our book.

“I just want to continue with this whole vibe, I guess,” she adds. “And if it helps one girl, then we’ve done a good job.”

In addition to a film adaptation of Instructions For A Teenage Armageddon – and an upcoming improvised comedy, Real Love, in which she stars alongside Russell Tovey and Sian Clifford – Rosie will grace cinemas screens as Liverpool icon Cilla Black in the Brian Epstein biopic Midas Man, which is currently filming.

“I’m trying not to get exiled from Liverpool, essentially – because they’re very protective of their own!” she laughs. “I’ve actually been having anxiety dreams. I had one last night. I was having dinner with Cilla Black, and she thought I was wrong for the part. And I woke up like, ‘Dear God!’

“But it’s great,” she adds. “It’s a very good challenge. And I love anything that’s set in the past, it’s so fun. You step on set, and you’re stepping back in time. I’ve done two other jobs this year that have been set in the 1960s as well, so I’ve sort of spent my year there. The costumes, the make-up – everything was just so cool back then.”

As we eagerly await the film’s release, Rosie is – true to form – already looking at the next project.

“Once Midas Man is finished, we’re starting to prepare to put the Teenage Armageddon play on,” she says. “It opens in February. We did a preview run just before the pandemic, and then got locked down. So we’re finally back up, two years later. It’s going to be a slightly chaotic Christmas, I think…”

Instructions For A Teenage Armageddon is out now. 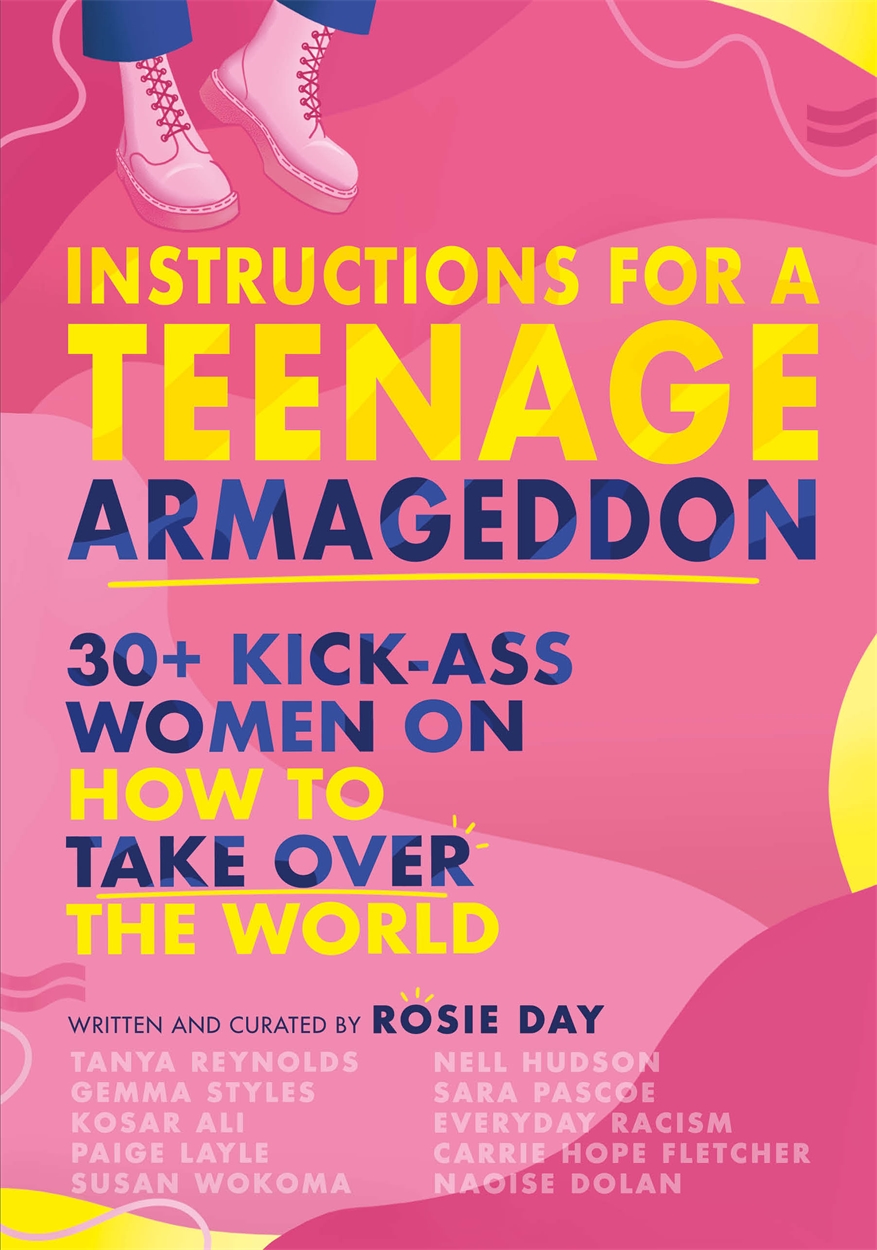 Georgia Pritchett: "Maybe anxiety is a way of trying to make sense of the confusion"
Bruce Springsteen & The E Street Band 1979 concert film to arrive later this year
Jessie Buckley joins star-studded cast of Women Talking, based on Miriam Toews' novel
Jo Spain: “People say, ‘I really want to write a book.’ And I’m like, ‘If you want to write it, you will.’”
WATCH: Netflix release suspenseful Behind Her Eyes trailer starring Eve Hewson
Netflix to shoot The School for Good and Evil fantasy film in Belfast