Drake was such a fan of London inner-city drama Top Boy that he helped resurrect it as a Netflix show. As the new series debuts, star Little Simz talks about the challenge of balancing acting with music and the thrill of sharing the screen with a rival Mercury Prize nominee.

Little Simz and Santan Dave may be two of the stars of Netflix’s big new urban drama Top Boy. But they’re also both musicians in contention for this year’s Mercury Prize. Was there any friendly rivalry on set, Hot Press wonders?

“Not at all,” laughs Simz, AKA 25-year-old Islington native Simbiatu Abisola Abiola, whose Grey Area LP is one of the favourites to land this year’s gong. “If he wins, it’s still a win for me. Just the fact we are both in the conversation, what our albums are discussing, who we’re up against… it says a lot already. It’s healthy competition. My win is his win, his win is mine.”

Simz had already wrapped the LP and was busy promoting it when she started filming Top Boy around London. The Netflix series is both a sequel and reboot of the Channel 4 critical hit of several years ago. The original Top Boy was cancelled after just two seasons in 2012, to widespread disgruntlement. Among its many fans was a Toronto native who felt its depiction of life in the inner city ghetto mirrored life in his hometown.

Crushed that there was to be no more Top Boy, he did what any uber-devotee would: went on the internet and campaigned for it to be brought back. The fact he was a multi-million selling rapper – you may have heard of his stage name of Drake – ensured that the message got through. Just like that Netflix was on board and the show’s creator, Irish writer Ronan Bennett, was back at his typewriter bashing out the third season.

“Top Boy began life a decade ago when I witnessed a small child dealing drugs outside my local supermarket,” Bennett wrote in The Observer recently. “My interest piqued, I talked about it to my good friend Gerry Jackson, a well-known and hugely respected figure in the community. He vouched for me and young men and women began to open up and tell me their stories.

“The more I heard, the more interested I became in the ‘why?’ of the lives they led. We talked a lot about drugs, police and prisons, and the mechanics of dealing. But we also talked about homes and mothers, fathers and siblings; about school and college; clothes and trainers; music and TV. They were all – every one of them – from poor and disadvantaged families. And they were mostly black. 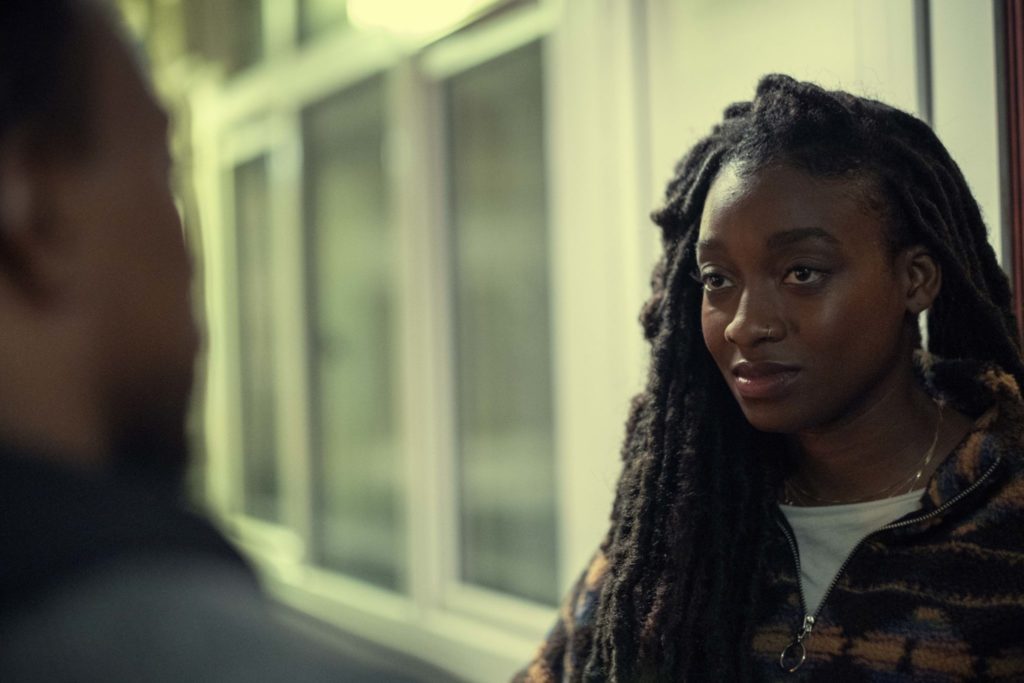 “Young audiences in particular loved it. They saw their lives on screen and responded with huge excitement. Replying to the gushing of fans on Twitter, someone pointed out: you do realise that Ronan Bennett is a middle-aged Irishman? Yup, that’s me, as if being one thing precludes you from writing about another. After all, writers imagine themselves to be all sorts of things, from serial murderers and time travellers to eighth-century Anglo-Saxon concubines.”

“It was great having Drake on board,” says Simz. “He was heavily involved. He made his presence known and was very supportive. He even came to the table reading. But he didn’t come in and try to change everything up. It was more like, ‘Do your thing… I’ve been a fan of the show.’”

Drake was back supporting Top Boy for its London premiere recently.

“The human element drew me in,” he said. “I started just looking them up. Like, who are these people? Are these actors I should know? Are they just famous over there? I remember I hit Future, and I was just like, ‘This show is incredible.’”

He had reached out on Twitter to Ashley Walters, formerly of grime collective So Solid Crew and latterly the conflicted drug dealer lead in Top Boy. Together they approached Bennett and then Netflix. And they were off to the races.

“Top Boy is a raw, real representation of street culture,” Walters has stated. “It explores how these characters came to make the choices they make, and gives the audience a behind-the-scenes look as to what is happening on our streets today. It needs to be talked about and the show doesn’t shy away from giving us the platform to tell our story.”

Simz agrees it’s the show’s authenticity that punches hardest. She was still in school when season one debuted in 2011.

“There was nothing like it on TV at the time,” she says. “Every conversation was, ‘Have you seen the new episodes?’ Nothing was representing our stories like Top Boy was.”

“You see the the human side,” says Simz. “You see why characters make the decisions they make. It’s a way of survival.”

Simz plays a new character named Shelley. “She’s a strong independent woman. A single parent. She has a daughter and she is also a career. She’s grown up in the [fictional deprived neighbourhood of] Summerhouse. She knows that life very well and she’s trying to break out of it. She wants to give her child a better future.”

Britney Spears says that she's just filmed a movie called The Idol
100 Voices #AllAgainstRacism: Demi Isaac Oviawe – "I was always addressed as ‘the Black wan off the telly’ instead of Demi. It used to make me so mad"
Grammy Nominations 2022: Olivia Rodrigo, Billie Eilish, Lil Nas X lead the pack
Film Review: House of Gucci - "an intriguing look into the intersection of love, family and business"
The Shows Must Go On: American Rust, Wheel Of Time, Dexter: New Blood & More
Agnes O’Casey: Mad Hatter Q&A