Celebrating their 20th anniversary in 2019, Dublin’s Wildcat Ink have undeniably solidified their reputation as one of the capital’s most celebrated tattoo and piercing studios. And, as generous as they are renowned, Wildcat are kicking off their celebrations with an amazing €50 discount for all Hot Press readers!

Established in 1999, the body modification company opened their original studio in the Stephen’s Green Shopping Centre, and continue to serve customers there today. With a team of highly experienced and talented tattoo artists and piercers, Wildcat Ink’s Southside studio is widely acclaimed. Wildcat Ink’s second studio, which opened on the Northside in 2008, is no less impressive. Located on Jervis Street, just round the corner from the Morrison Hotel, the company’s second studio is just as popular as their first. With state of the art facilities, the studio has an experienced, talented team.

Through hard work, fantastic artistry and unrivalled customer service, Wildcat earned its reputation as one of the most reliable and experienced studios in the whole of Ireland. As getting ‘inked’ has become more and more fashionable in recent years, Hot Press sat down for a chat with the wonderfully effervescent Dolores Murray, Founder of Wildcat Ink, for an insight into how the industry has have changed so dramatically over the past two decades. “When Wildcat started there were very few other tattoo shops in Dublin,” reflects Dolores. “We had to be put in a discreet location because landlords at the time were not willing to have people doing tattooing in public!” Although attitudes began to change in the ’90s, there was still a negative attitude in some quarters towards those with body modifications, tattoos and piercings. “You’d think I was opening a brothel or something!” says Dolores. 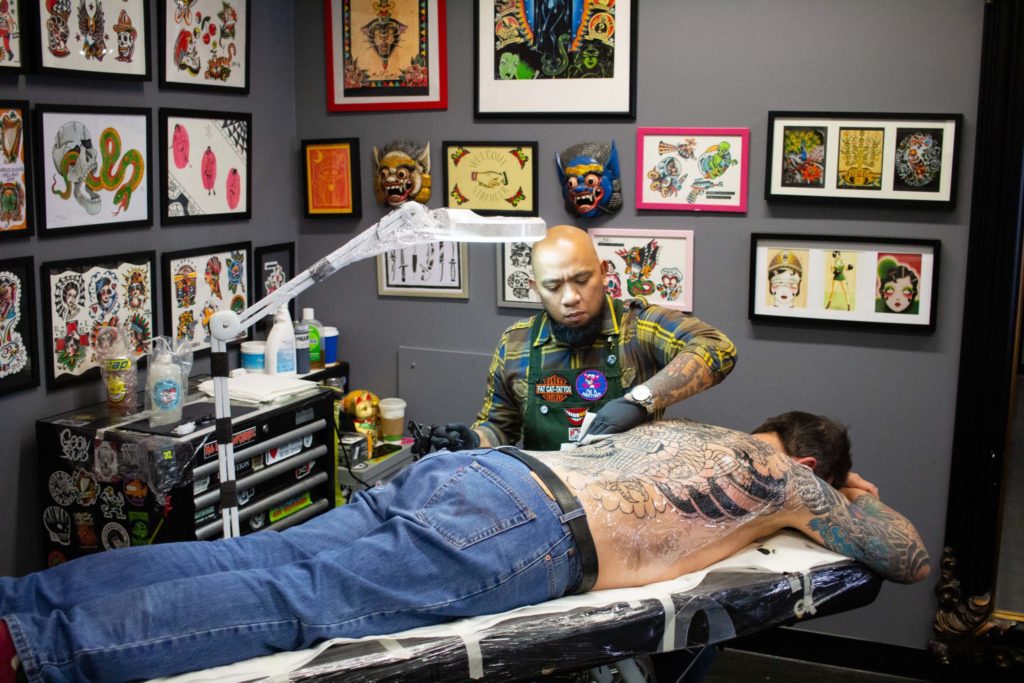 Of course, Wildcat wouldn’t have thrived without its initial loyal clientele, and as perceptions began to change, she began to see a lot more parents with teenagers coming into her store. At the time, Wildcat Ink had already established itself as a respected and trusted entity. “These days everybody is coming in,” notes Dolores. “Initially, it would only be people who are really into tattooing, but now we get people from all walks of life.”

Dolores stresses that people shouldn’t be shy in demanding exactly what they want from their piercings or their tattoos. At Wildcat, it’s all about individuality, and expressing yourself. As it should be. Whether you’re looking to add to a skinful of ink, or tentatively contemplating a first tattoo or piercing, Wildcat will carefully guide you through the process and their artists will ensure that the final product is the result of consultation and a design your can be proud of.

So, why not join in with Wildcat’s 20th anniversary celebrations and book your consultation today. Remember to quote the Hot Press Discount when booking your appointment to avail of their amazing special offer.

100 Voices #AllAgainstRacism: Gemma Bradley – "I can definitely see Ireland becoming more accepting of people from other cultures"
Minister Catherine Martin announces €50m supports for Live Performance Sector
Gift Guide: Maktus in George's Street Arcade
Holly Humberstone: "I’m an unsatisfied person. I always feel like if something’s good, I have to pick holes in it and find problems"
100 Voices #AllAgainstRacism: Arveene – "There’s so much more to achieve to get us to a place where they don’t judge you on colour but see your colour"
Fontaines D.C. added to star-studded Reading & Leeds 2022 line-up