"Dublin is not for sale!" protestors cheered as they walked along the banks of the River Liffey to the Dublin City Council offices. Photos by: Miguel Ruiz

On Saturday (October 9), protestors rallied to oppose plans to demolish part of the Cobblestone, an iconic pub and music venue in Smithfield.

In response to the announcement of the proposed development, over 27,000 people have signed the 'Save The Cobblestone' petition. Musicians like John Francis Flynn and Ispíní na hÉireann have come out in support of the movement. 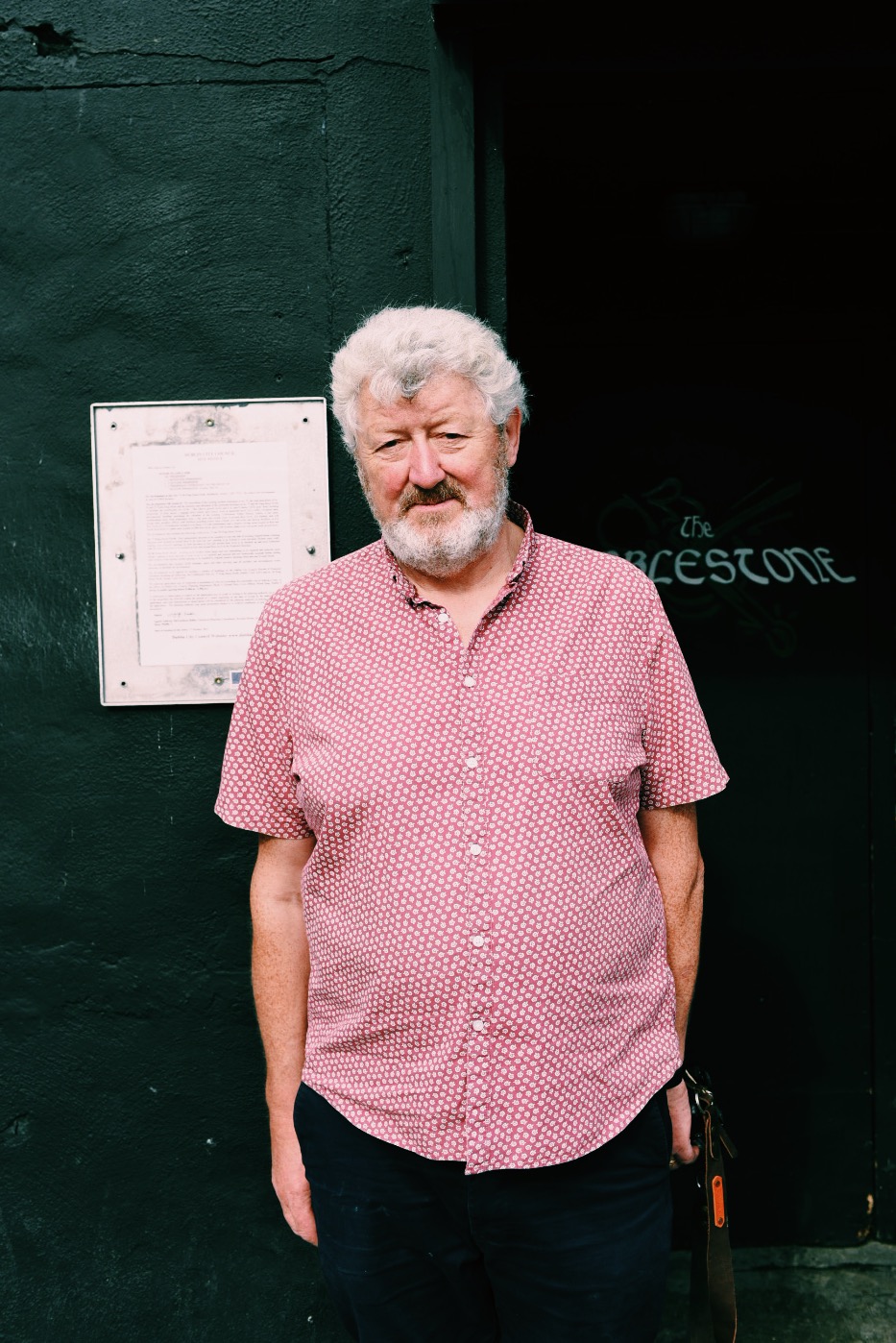 Tom Mulligan, owner of the Cobblestone pub in Smithfield.

A planning application has been submitted to Dublin City Council. However, no decision has yet been taken, with the protest in effect sending a signal that there is likely to be fierce opposition, in the form of observations, which have to be submitted within five weeks of the receipt of the application and cost €20 to make.

As people gathered in Smithfield Square, musician Eoghan Ó Ceannabháin, who created the 'Save The Cobblestone' petition, addressed the crowd. 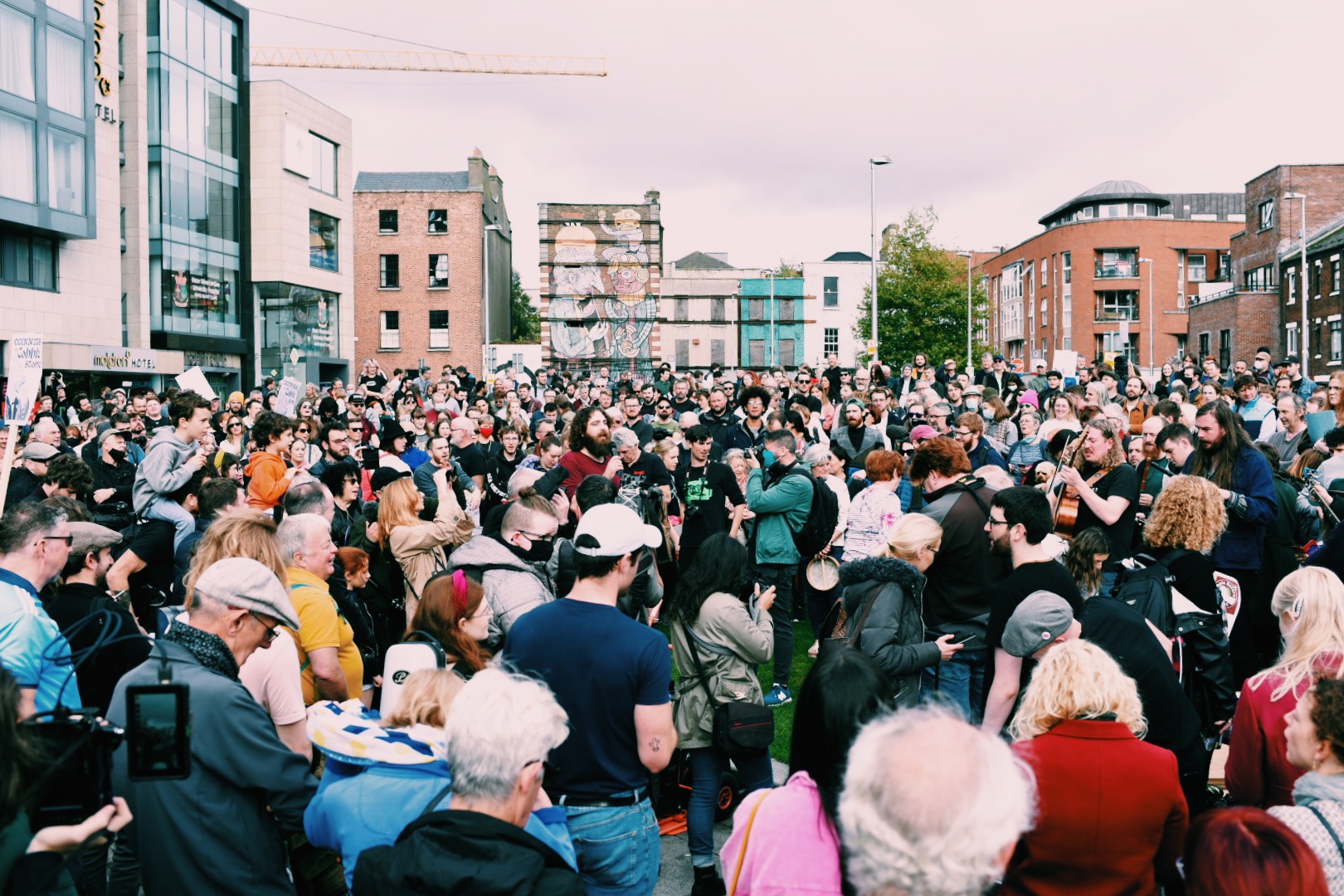 The crowd gathering at Smithfield Square.

Ceannabháin, who had previously likened the proposed developments to "cultural vandalism", has been playing at the Cobblestone for years. He explained that his father also played at the pub and was friends with Mulligan. 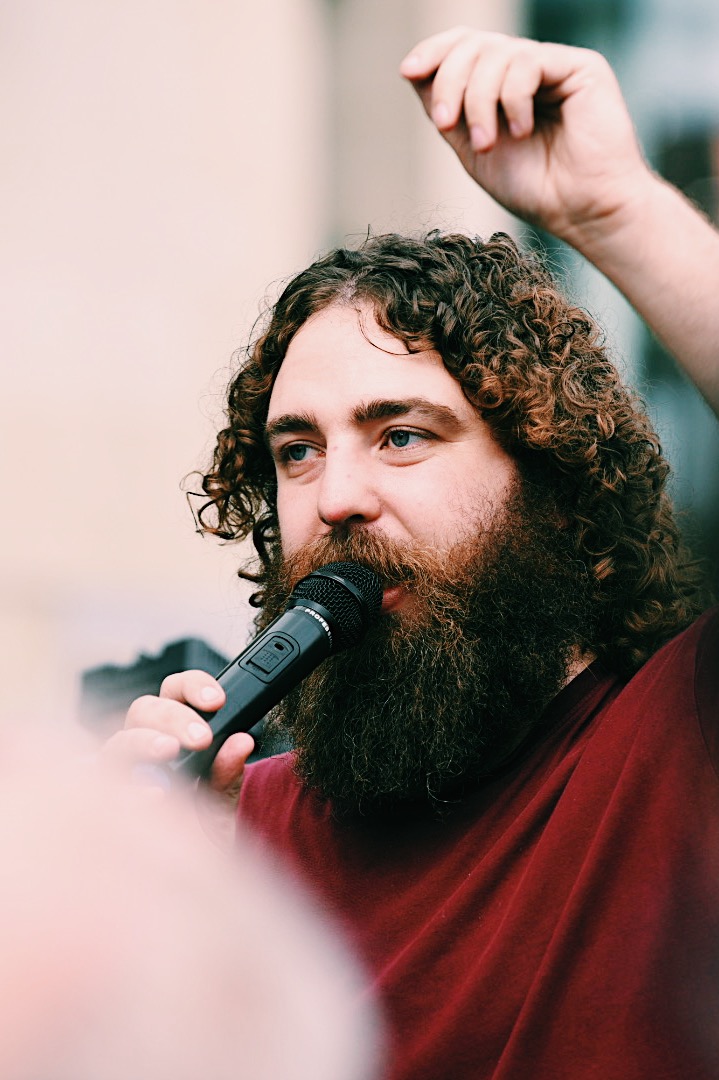 Eoghan Ó Ceannabháin, musician and creator of the Save The Cobblestone petition, addresses the crowd of protestors at Smithfield Square.

"I think we're talking about the value of the music and the culture to people, and it's basically sucking all that out of it and leaving a husk there for tourists, presumably to come and stay at the hotel and have the experience the Cobblestone sold to them, but it won't be the same," said Ceannabháin of the development plans.

"It's great to see the turnout today because it means that people are willing to fight back," he added. "Hopefully we can channel it into something and beat the Cobblestone proposal and hopefully win on other things as well. There's a whole community around the place. It's not going to go without a fight."

Catrióna Kennedy, a musician who plays regularly at the Cobblestone, and runs gig sessions to promote Donegal fiddle music alongside her sister Sinéad, called the situation "cruel."

"The backroom, which is what they're proposing to take down, or the hotel that they're going to build over, that's where many of us were given a platform," she said. "Developing musicians, as well as very accomplished musicians, are given the chance to perform in front of crowds – it's that platform that's being taken away. But there's also people who run music nights there, and singing sessions – and that's all going to be gone." 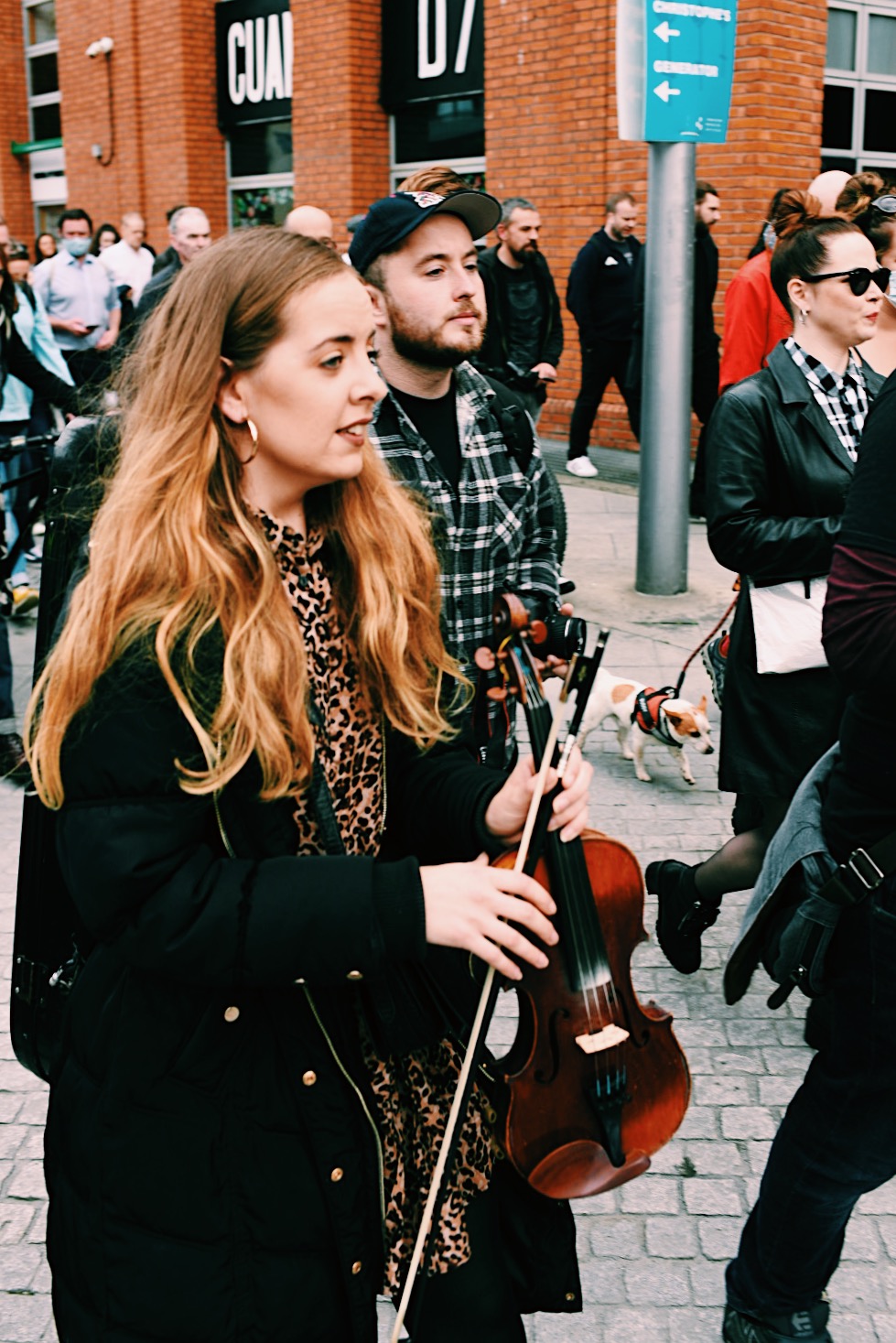 Catrióna Kennedy, a regular musician at the Cobblestone.

Traffic stopped as protestors marched from Smithfield Square to the Dublin City Council offices, chanting "homes not hotels" and "culture not vultures" in response to the proposed developments. Crowd members held signs and instruments, showcasing the music and creativity that could be suppressed, were venues like the Cobblestone forced to close their doors. Some carried a coffin with the words "RIP Dublin" on it, which was carried across the Ha'Penny bridge and brought to the steps of the City Council offices. 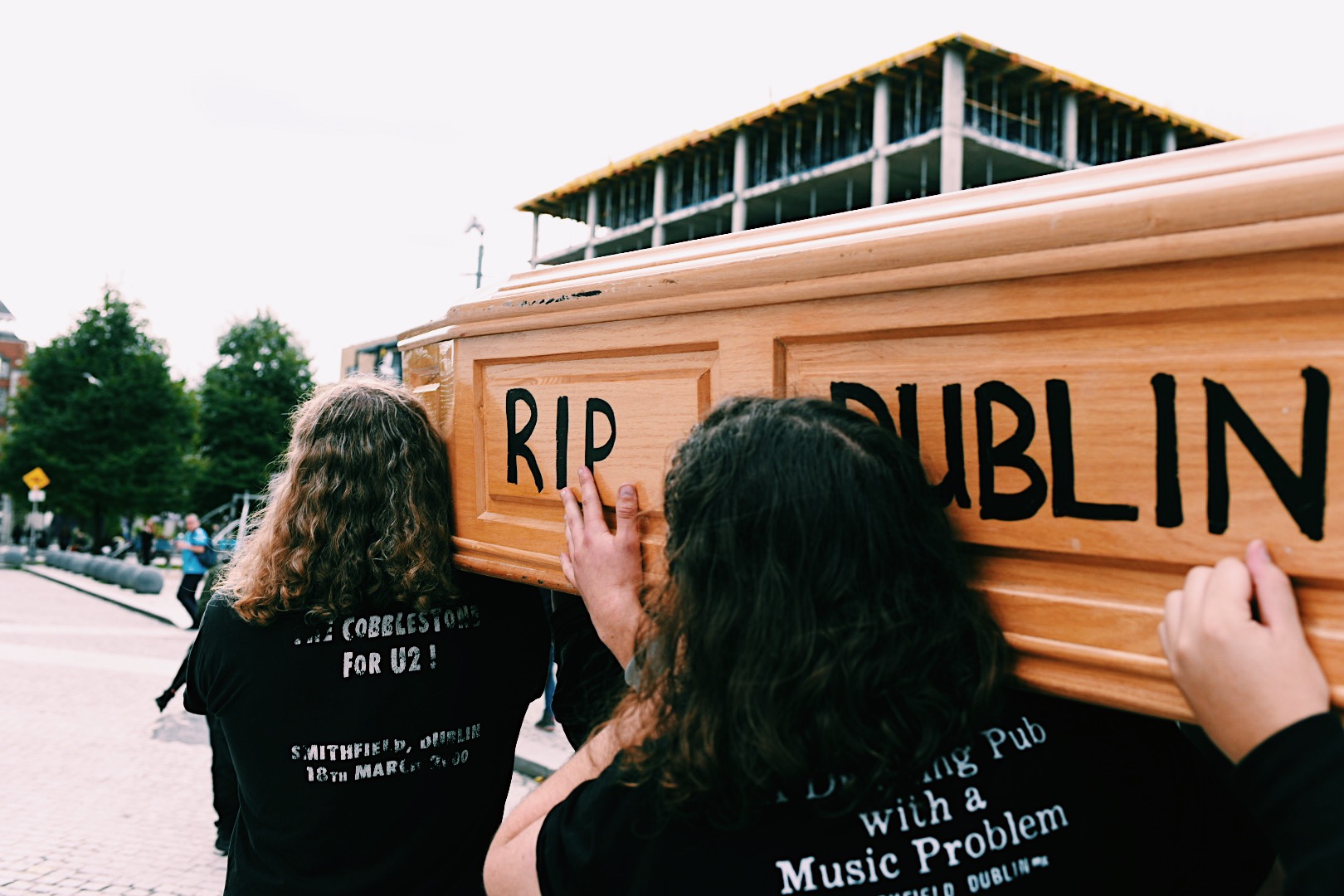 The coffin with the words "RIP Dublin" was carried to the steps of the Dublin City Council. 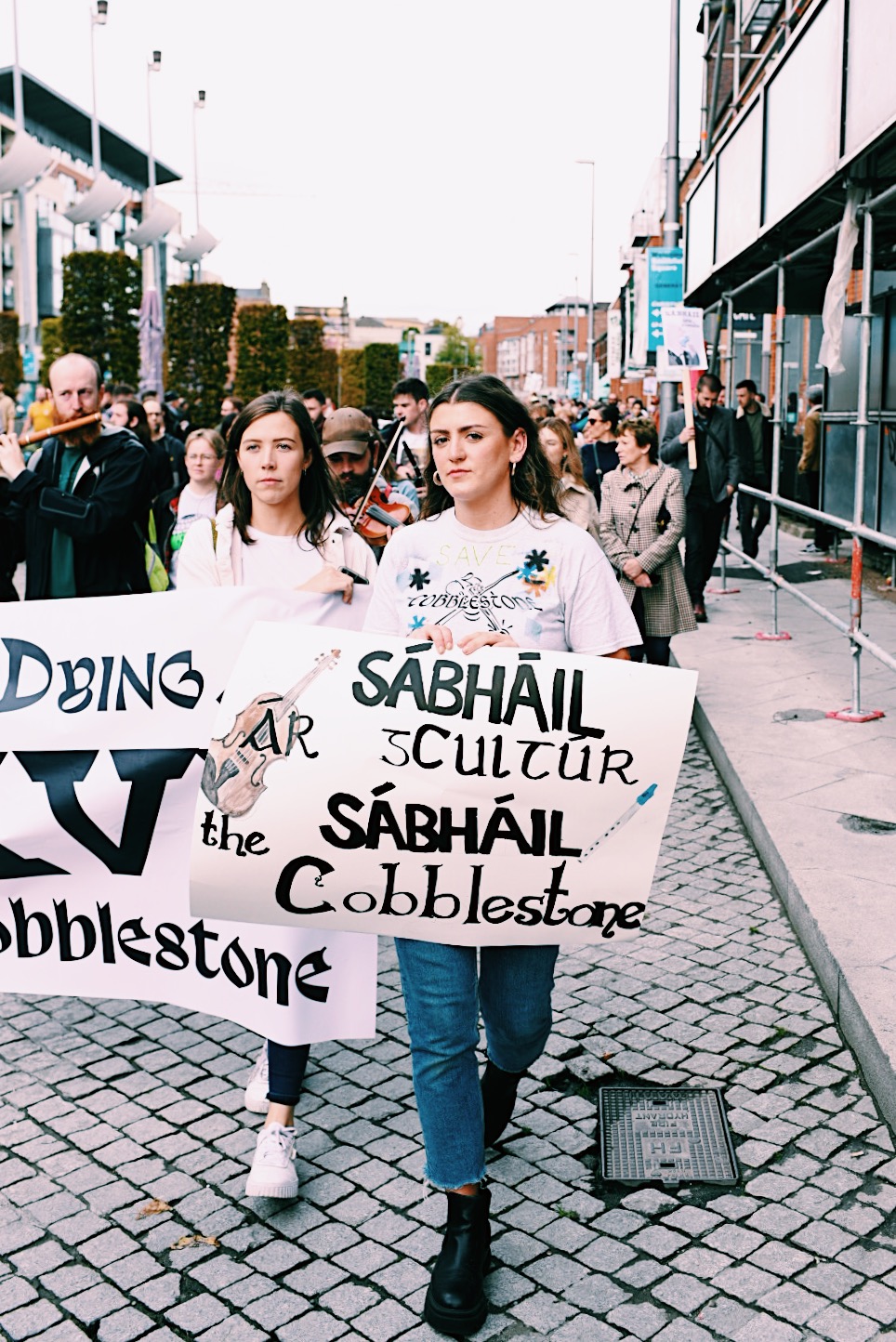 Protestors carrying signs about saving the Cobblestone and culture.

For protestors Rachel Loughrey and Aisling Walsh, places like the Cobblestone are 'sacred' and should be protected.

"If you look at churches or sacred sites, they're places of worship where people go and they pray, they listen or whatever that is," said Walsh. "So for a lot of people, music and the arts and culture is their religion. Places like these places they're tearing down are places of worship for Ireland's culture. To remove that, it's heartless to even consider it. These spaces should be protected at all cost."

They also explained how the situation reflects larger societal problems, including environmentalism, mental health, and the city's current housing crisis.

"We keep on demolishing these buildings, and all these materials are mostly going into landfill or being incinerated," said Loughrey, who studied architecture and planning in university and is now involved in sustainability. "We could use the buildings we have – these amazing buildings have lasted for hundreds of years – and transform them into things that we need, such as homes, rather than hotels."

It's clear that activists feel that the issue goes beyond the potential demolition of the Cobblestone. But seeing people putting in the effort in an attempt to ensure that an iconic Dublin venue remains an important site for music, art, creativity, and culture may well prove to be a sign of things to come.

BBC to explore Magdalene Laundries in new series starring Ruth Wilson, Daryl McCormack
Early bird rates available now for Marathon Coaches to Electric Picnic
Syrian-Irish author Suad Aldarra: "Because of the negativity, I had to disconnect myself from my history and my hometown”

Clare Island launches new folk music festival this September
Man arrested for murder of 87-year-old Clare man in London
Anna Mullarkey: "Declan O’Rourke, Lisa Hannigan and Máirtín O'Connor are huge influences. I learnt a large part of the trade through Daithí"
Track of the Day: milk. - I Might Bore You.
Imelda May set to play Halloween-themed Púca Festival
The Hog: "We need to recognise and respond rapidly to changing economic and geopolitical realities"