Iconic Irish singer-songwriter Damien Dempsey revisited his album Seize The Day at The Grand Social on Wednesday night. Hot Press's Up Close and Personal series is run in conjunction with Aidan Shortall of Up Close and Personal promotions and is supported by the Department of Tourism, Culture, Arts, Gaeltacht, Sport and Media.

Over the course of his remarkable career, singer-songwriter Damien Dempsey has established himself as one of the country's most beloved artists. One of the building blocks on his way to claiming a key place in Irish music was his second album, Seize The Day, released in 2003 and featuring music legends like Brian Eno, Sinéad O'Connor, and Caroline Dale.

The album was home to some of the singer's most iconic hits, from 'Apple of My Eye' to 'It's All Good'. This album also marked Damien's first time working with producer and musician John Reynolds, which kicked off a musical relationship that has carried throughout the last two decades of his career.

As part of the Up Close and Personal series, the celebrated musician discussed the genesis of the album with Hot Press’ Lucy O’Toole.

As Damien Dempsey walked on stage at The Grand Social on Wednesday night, the sold-out crowd was unable to contain themselves. It was immediately clear how much Damien's music has moved his listeners.

"I'm just happy that I'm alive, and that I'm still playing music," Damien opened. The two then discussed his humble beginnings, in which he detailed his first encounter with John Reynolds, leaving the audience in bits with his quick wit and humour.

After inviting Reynolds to a gig after meeting him at a party, the  Donaghmede singer said he asked the producer what he thought of his set – to which he replied, "Couldn't really hear you, the sound was that bad."

Despite the rocky audio, Damien received a call from Reynolds a few months later, to which he exclaimed: "What's he ringing me for? Did something go missing out of his house? It wasn't me!"

Reynolds invited Dempsey to his London home studio, where they recorded 14 tracks. "He sent me a CD about a week later with Brian Eno, Sinéad O'Connor, and Caroline Dale, one of the best cellists in the world, and I just broke down crying," he shared.

With themes of addiction, loss but also hope and positivity, Dempsey’s music often reflects his fans' pain, alleviates their anguish and ultimately provides peace as they ‘sing all their cares away’.

This could be seen clear as day as the first song on the album, 'Negative Vibes', was played. The audience members seemed to join in a spiritual experience as they sang along to every word, the track's energy vibrating in their bones.

This song became Dempsey's unofficial anthem for himself.

"When I started playing music, singing in me own accent, singing songs with a Reggae tinge, people were very abusive where it was from," he revealed. "So I wrote this song to sort of sing to myself if I was getting abused, or I would sing to them in their face. It helped me when someone was putting me down, I would just sing it under my breath or sing it straight in their face."

The influence of reggae was first evident in Damien’s first album, They Don’t Teach This Shit In School, but continued to be an important part of Damien's music.

Damien discussed with Lucy his introduction to reggae through Bob Marley. "He came to Dalymount Park, and I knew lots of people that had tickets for him. I think the people that went spread out his music down around Dublin.

"It sort of put you on the good vibrations, that beat. It sort of just did something to your soul, puts you on a good frequency. They were singing songs about what's going on, historical songs, and songs about uprising with hope and positivity in them. It just really hit me, and gave me hope." 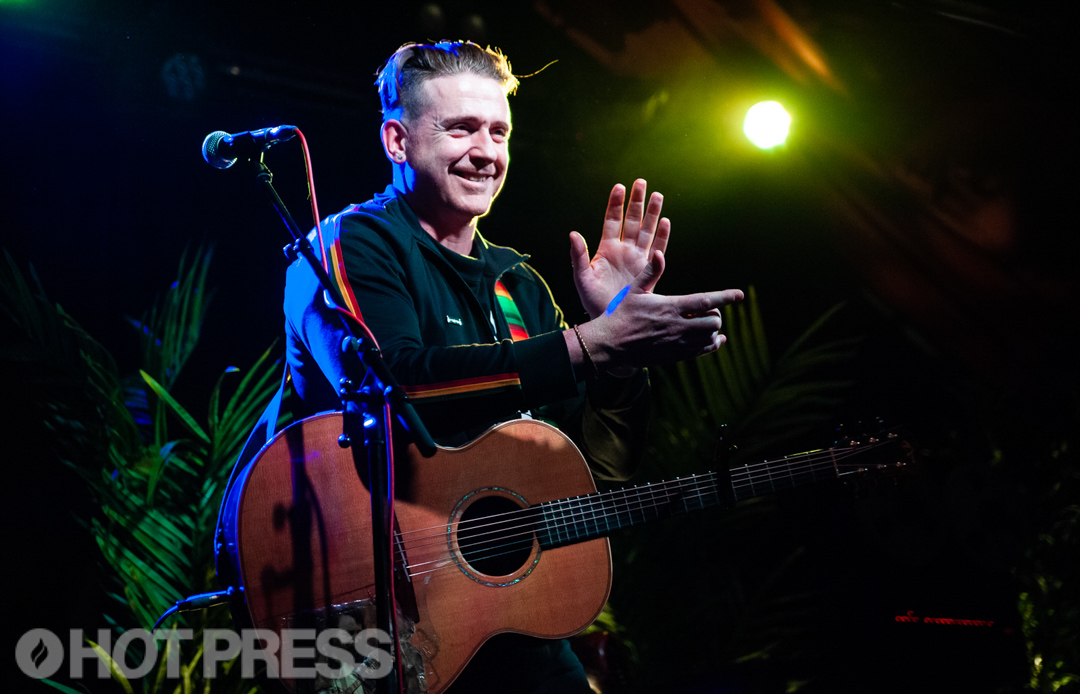 Damien then performed 'Ghosts of Overdoses', captivating the audience and leaving them in a trance with his mesmerising vocals, effortlessly strumming on his guitar.

When detailing how his song about the heroin epidemic in Dublin was created, Damien explained: "I tried to imagine when writing this song what it must've been like for parents to see their children dying, their neighbours' children dying, and what it did to communities."

The songwriter has a gift of bringing the past to life, and using it as a tool to deliver social commentary: "I was always fascinated by history for some reason, and I have a vivid imagination so I could see it in my mind's eye."

His third track on the album, 'It's All Good,' featured none other than Sinéad O'Connor.

"No one can ever sing the way she sings," Damien shared. "She's a soul singer, when she sings, she's gone, she's away with the fairies."

When asked by Lucy what made him re-record this track, which originally featured on his first album, Damien shared that "John said that track is too good to let go. For the first album, there was no money to promote it. There was no Sinéad to champion it, so it disappeared. John said 'This track is going to mean something to people, you have to do it again.'"

"I wrote this song, and I played it, and people liked it, but the outro wasn't on the song, and there was something missing," he added. "What's the most positive thing I could say to people in the song? 'Love yourself today.' When I started playing it with that, people started reacting better."

The iconic line is now the title of Dempsey's documentary, set to be released on November 5. "They were going to call it 'The Church of Damo' – it sounds like a cult or something!" the singer joked.

Lucy and Damien continued to explore Seize the Day in depth, playing through 'Factories', 'Jar Song' and 'Celtic Tiger' before arriving at Damien's third live performance of the night, 'Apple of My Eye.'

The singer spoke straight to the audience to describe the origins of this track, stating: "When I saw New York, and all the people from everywhere, every rock on the planet, every face there, I just couldn't believe all these people living together in peace.

"You know, you'd think there would be a big war but places like New York prove that you can live together in one very small space in peace. And now, Ireland's getting the same, and it's beautiful."

With Caroline Dale adding cello to the piece, Damien stated that this song meant a lot to him: "I suppose I just felt validated, you know? Because there were a lot of years of people telling me to just give up, 'Get a job you lazy bastard, give up the ghost!'

Dempsey continued to share this iconic album with an eager audience, playing through many of his historically-influenced tunes like 'Industrial School', 'Great Gaels of Ireland', and 'Marching Season Siege'.

He then delighted his audience with a performance of the album's hidden title track, 'Seize the Day'. When asked if he was living this song's mantra to the fullest, he replied, "Oh absolutely. I've been gracious, traveling around the world, meeting people from New Zealand, Australia, the States. There's a lot of great people out there." 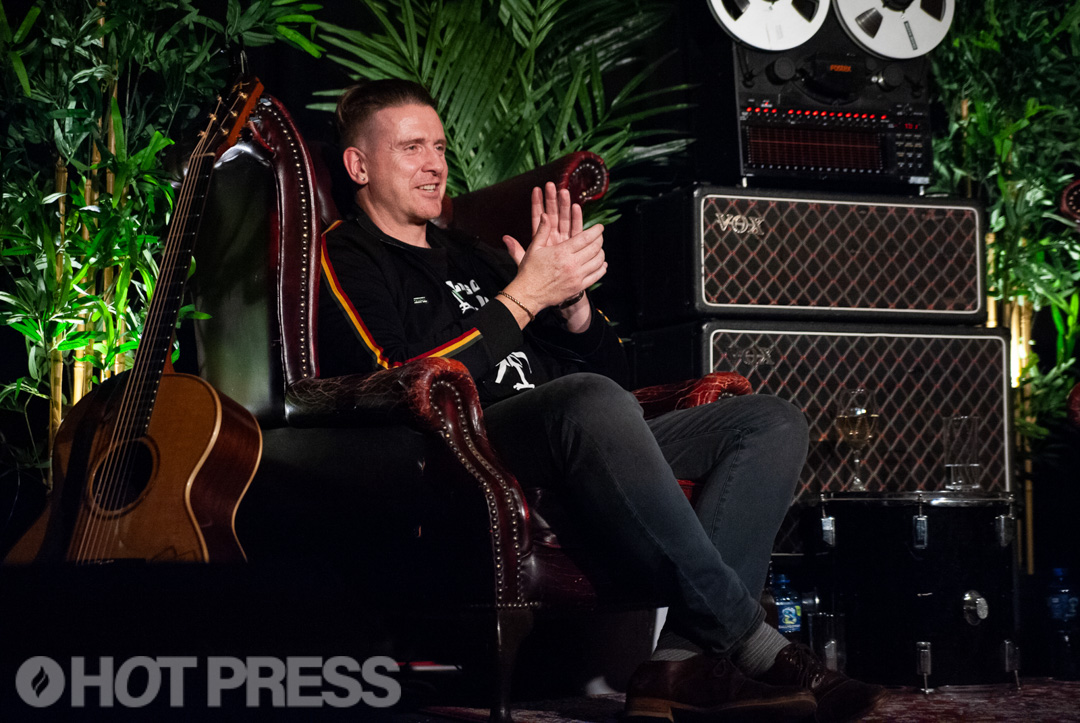 It's clear that Dempsey is happy with his current position in Irish music, sharing: "I never wanted fame or fortune, I think that destroys lots of people. It disconnects them from their community. I think you're better off being in the middle. Just a little amount of success, instead of being huge, and that's what I am."

So what's in store for one of the greatest Irish voices of the modern era?

"An EP in the new year, maybe a show in The Abbey Theatre," he stated to a chorus of 'oooohs' from the audience.

The singer ended the captivating night with a performance of 'It's All Good', raising his glass with a "Sláinte!" and asking the crowd, "Will you sing along?"

He closed the night with a message of love before his audience sang along to his last song: "You have to love your eyesight, your hearing, your speech, your heart, your lungs, all your organs. It's incredible what's happening within us, it's in our universe, and it's living and breathing, it's amazing and we should give thanks for it and just love it, you know?"