Performing for the first time at the historic Limerick venue, the rapper had said previous to the show that they wanted all guests to dress up in medieval wear for this Dungeons and Dragons medieval rap extraordinaire.

In the run up to this highly anticipated event, Chaila took to social media asking fans to indulge their inner child and dress up for the gig - turning the show into a magical fairy-land full of Dungeons and Dragons characters and medieval fantasy. And that is exactly what came to pass.

Doors to the enchanted land opened at six, with the first act, Beedle the Bardcore, gracing the stage donned in a all-concealing cloak at approximately 6.30. I don't think anyone in the crowd, myself included, expected the music this incredible act creates. Medieval style remixes/covers of well-known tracks like Kelis' 'Milkshake', 'Gangsters Paradise', 'Low' by Flo Rida, 'Drop It Like It's Hot', 'Smack That', 'American Boy', 'Yeah!', and 'The Next Episode', filled the castle courtyard, while early arrivers picked up merch and flower crowns to match the theme. This ye olde DJ provided the perfect backdrop to warm up the crowd, but similarly, my entire group of friends will now be using their albums as the music for upcoming DnD campaigns.

At this time, the host/squire/herald for the night, James Corr, entered the stage donned in fantastically vibrant velvet. An actor, medieval rein-actor, and sword-master, there was clearly no better choice for host. Reciting olden day riddles and conundrums, James then went on to introduce the next act - Negro Impacto.

The Dundalk duo Chi Chi and Laurence, AKA Strangelove, were joined by an additional guitarist, boasting a unique alternative neo-soul sound. Repeatedly thanking Chaila for asking them to perform, the three musicians looked ecstatic to be at the castle, with Chi Chi even following the medieval dress code. Bringing chilled, funky guitar and smooth, rich vocals to the forefront of their set, the group set an R&B laid-back mood across the grounds, while simultaneously exciting the crowd. 'Mini Excursion' took the cake as my favourite track from the trio, a song from their self-titled debut EP Negro Impacto. The group's joy was palpable, infectious even, casting a smile across my face for their entire set. 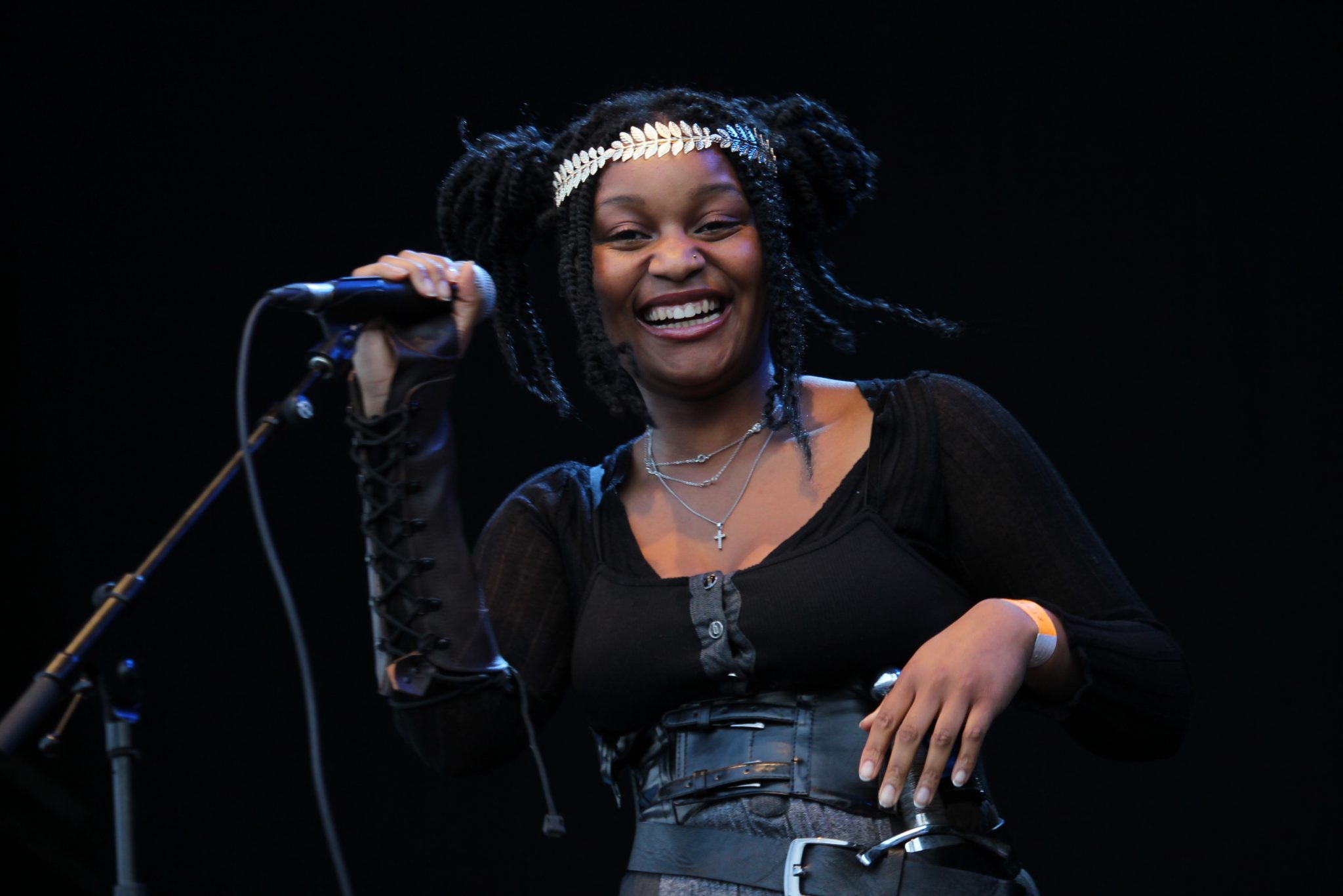 Corr returned to the stage with another excellently 'on theme' speech, introducing the Irish electronic-pop act, Le Boom. Songwriter Christy Leech launched onto the stage joined by Le Boom's drummer and DJ, as the incredible energy synonymous with this electro act engulfed the crowd. Bouncing, leaping and boogying around the stage, Christy had the eager audience wrapped around his finger. His gratefulness at the reception from the Limerick crowd was heartwarming, backed by the group's plea for Limerick fans to "make some noise" about them so they can come back and play Dolan's.

Highlights from the set included a wonderful remix of Kylie Minogue's 'Can't Get You out of My Head', and original track 'Shit Guinness and Paris' presumably dropping on the group's forthcoming double-A-side release, coming ahead of Le Boom's performances at both Electric Picnic and at the 3Olympia Theatre for a headline late-night show on Friday, 2nd December 2022. 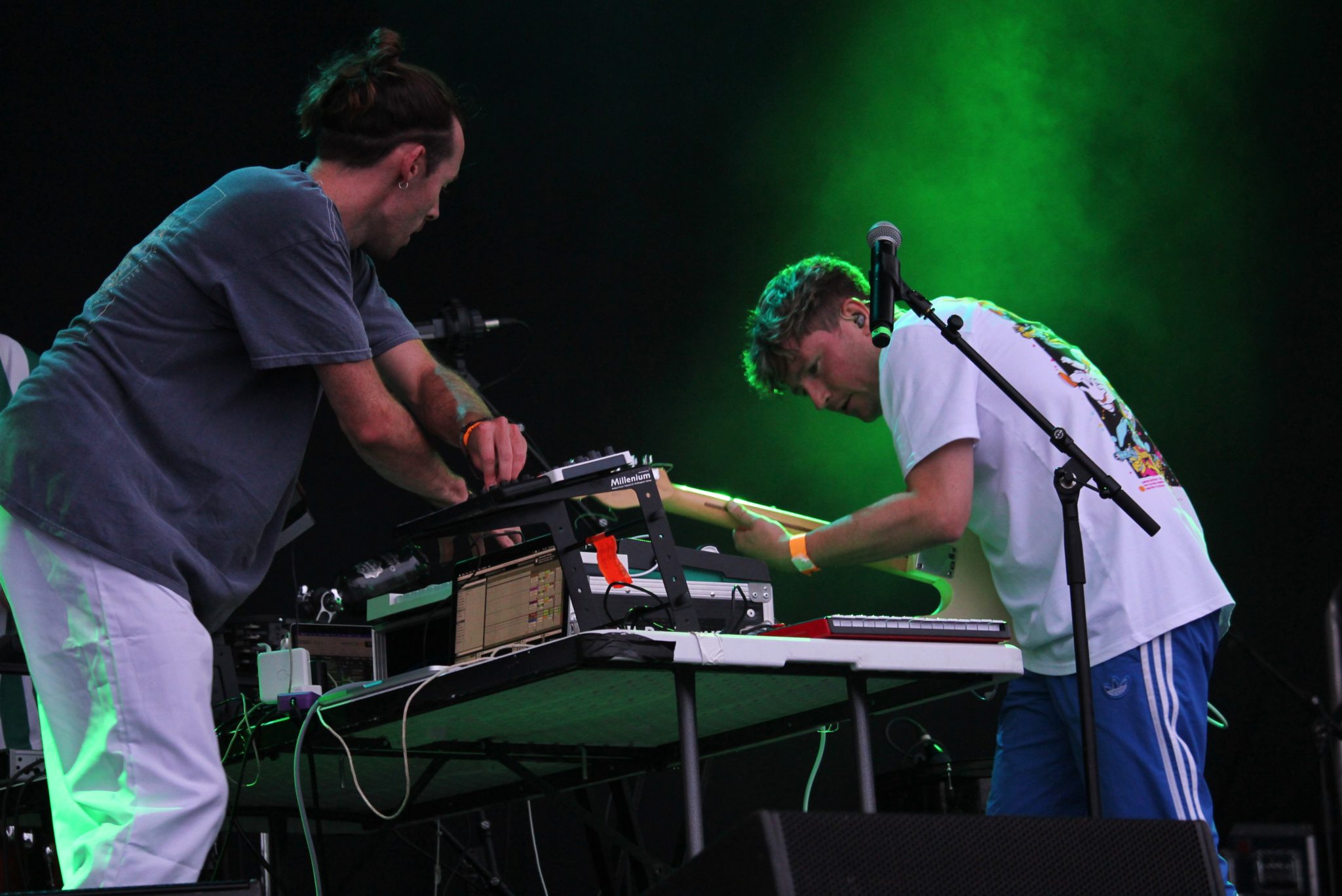 For a final time, James returned to the stage, this time posing a Shakespearean question à la Romeo and Juliet - What's in a name? Can I have your name? Ending his remarkable soliloquy-like performance, Corr welcomed to the stage the fae-roe, Denise Chaila. 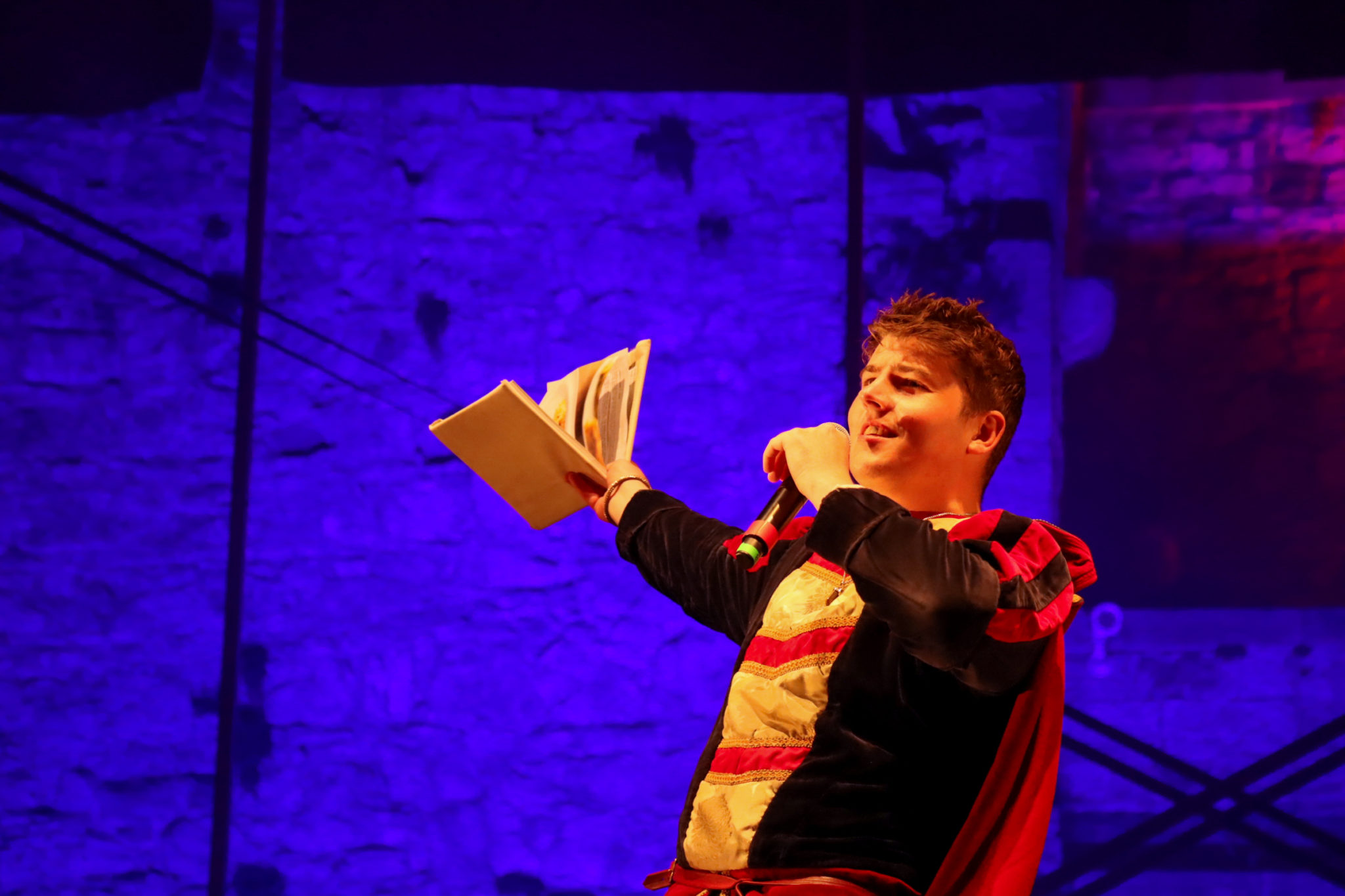 Lit up in purple,blue and pink by the wonderful MOB Lighting, Denise Chaila sauntered out on stage to a screaming crowd. Immediately clocking Limerick journalist Fintan Walsh donned in regal wear, Chaila poured out their gratefulness at the crowd indulging their fantasy. The rapper wore all black - armour, corset, and knee high boots, wielding a hand and a half sword (sheathed, for health and safety of course), with their brilliant Diana Ross-esque afro drowned in glitter. Chaila gripped a medieval style goblet, truly ready to fulfil their role as dungeon master of the night. 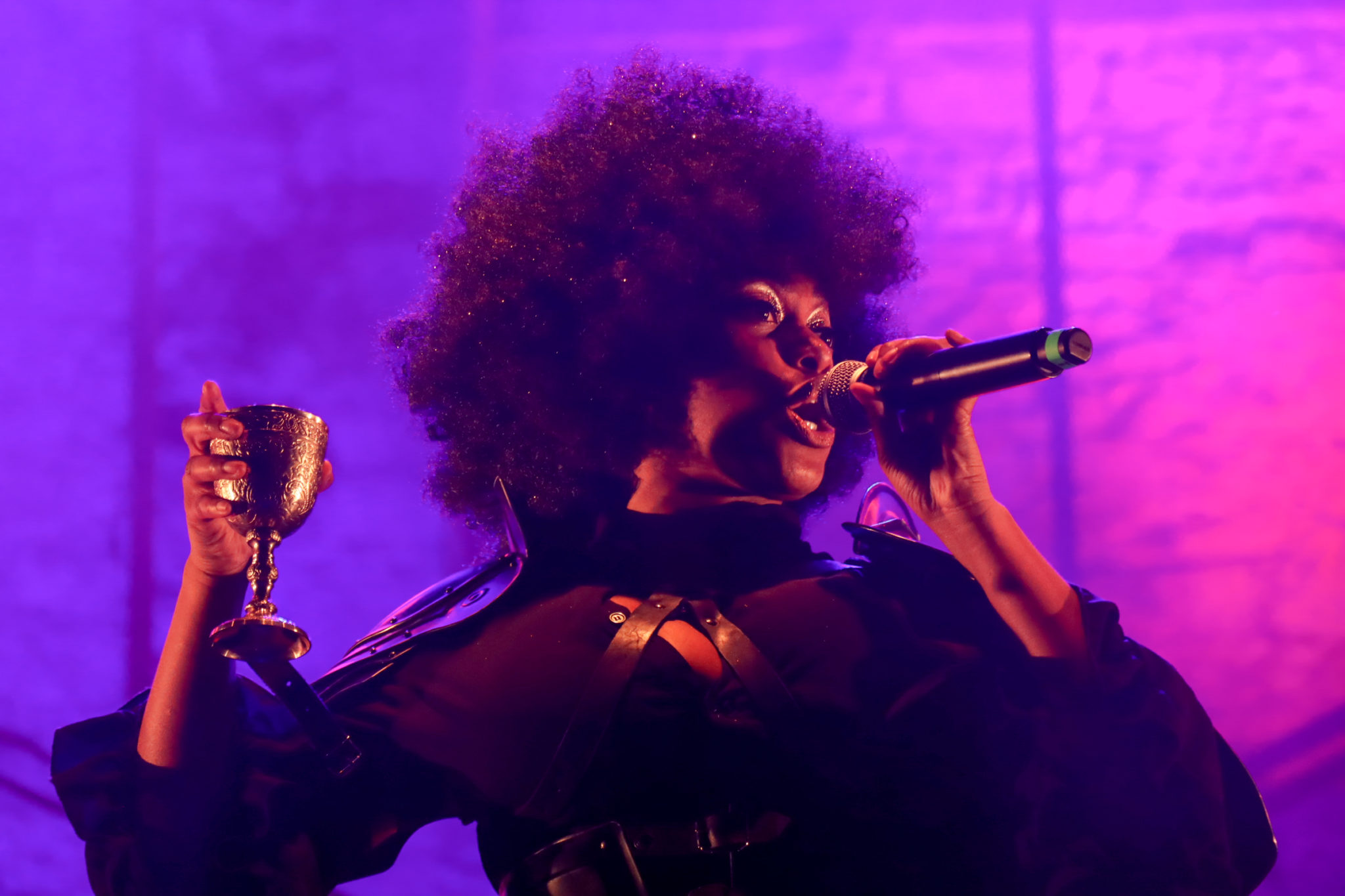 Joined on stage by narolane co-founder God Knows, Limerick based singer Michelle Grimes, DJ CC, Niwel Tsumbu on guitar, Jean Wallace on harp, MD Neil Dorrington, Rob Kennedy on drums, Paul Kiernan on trumpet, and Yuzuha O'Halloran on saxophone, the rapper exclaimed their joy at playing this iconic stage before directing CC to drop the first track - 'Man Like Me'.

Eagerly chanting along, the crowd lapped up every word of the performance, prompting Chaila to teach the audience lyrics to sing along for the next few tracks. For 'Copper Bullet', the crowd were to dance along as much as possible; for 'Might Be' the rapper taught the crowd the chorus, wanting sass and attitude; and finally for 'Return Of The King' God Knows took over as hype-man extraordinaire.

Confident and powerful, Denise spoke about Corr's previous soliloquy - the meaning behind names and giving someone your name. At this point, the crowd began getting suspicious of the next track - which was quickly shut down by the rapper: "I'm not about to do 'Chaila' next." More than this, Chaila continued to speak about people telling you what to do - this is when they taught the crowd lyrics to 'Move'.

After this robust, energetic performance, Chaila welcomed friend and activist William Keohane to the stage. The rapper, along with their crew, left the stage to give Will space to speak about TLC - Trans Limerick Community. A spectacular writer and fellow poet, Denise had asked Will to read two of his poems. For the second, Will had the audience simulate the sound of a heartbeat on their chest, to which a majority happily obliged. The poet performed alongside a courtyard full of silence, other than heartbeats - a scene to warm the coldest of hearts. This space in the show breathed the true soul of Limerick, an ever-evolving metropolis of inclusivity, positivity, and love. 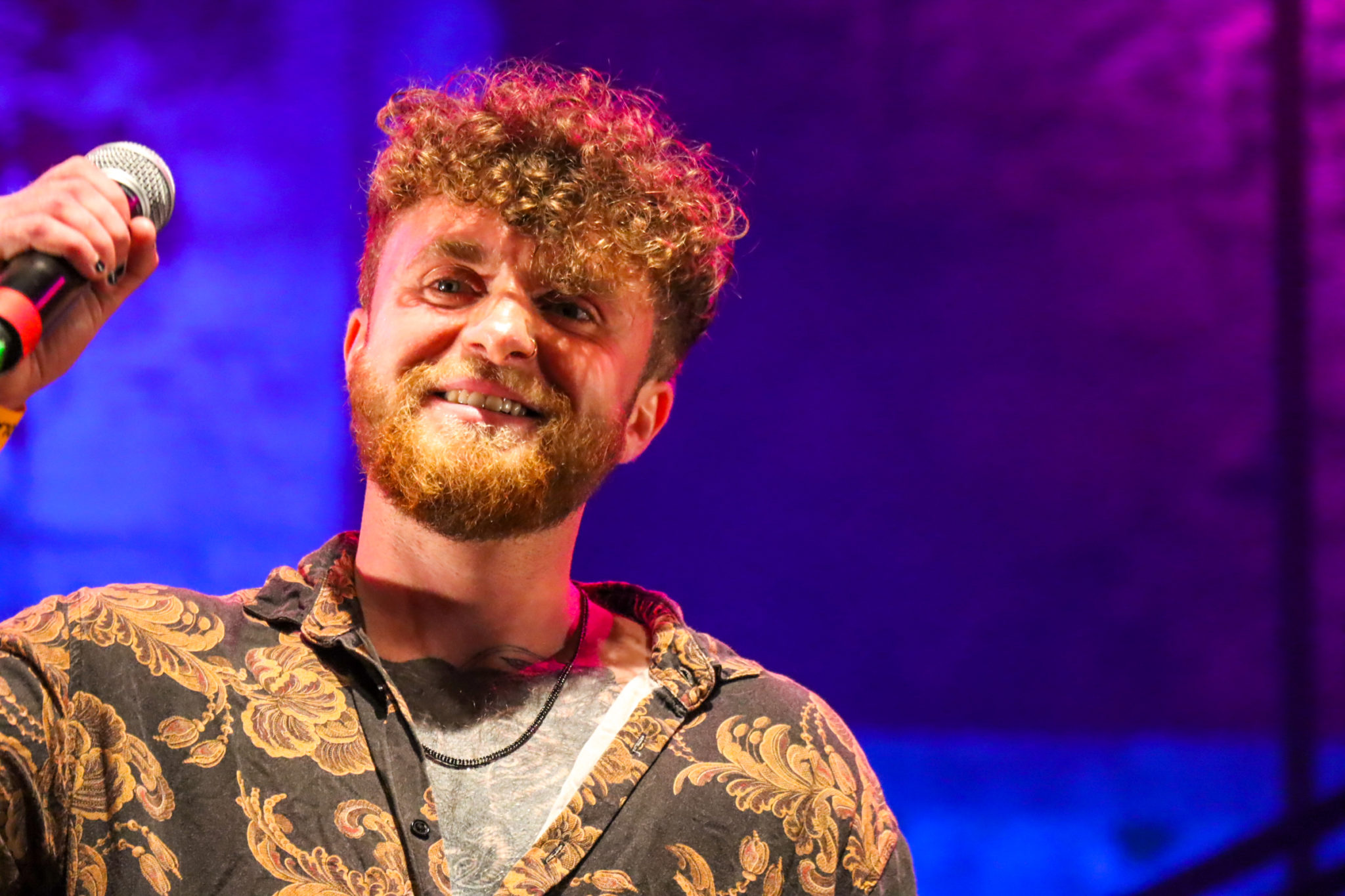 A costume change brought a glistening, ethereal Chaila back to the stage. Originally a poet themselves, performing with collectives like Limerick's since retired Stanzas, Chaila brought a lot of energy this into the show from 'Untitled/Fantastic' on. Ahead of Go Bravely track 'All That' the rapper made sure the crowd knew who Nat King Cole was - laughing that they had recently met someone who hadn't and was shocked.

The musician spoke about the importance of jazz, explaining how it underpins all modern music and art - much to the distain of my jazz-hating boyfriend, who felt well and truly schooled. Calling guitarist Niwel Tsumbu to the front of the stage, Chaila sang a heartbreakingly beautiful version of the emblematic Nat King Cole track 'Unforgettable'. 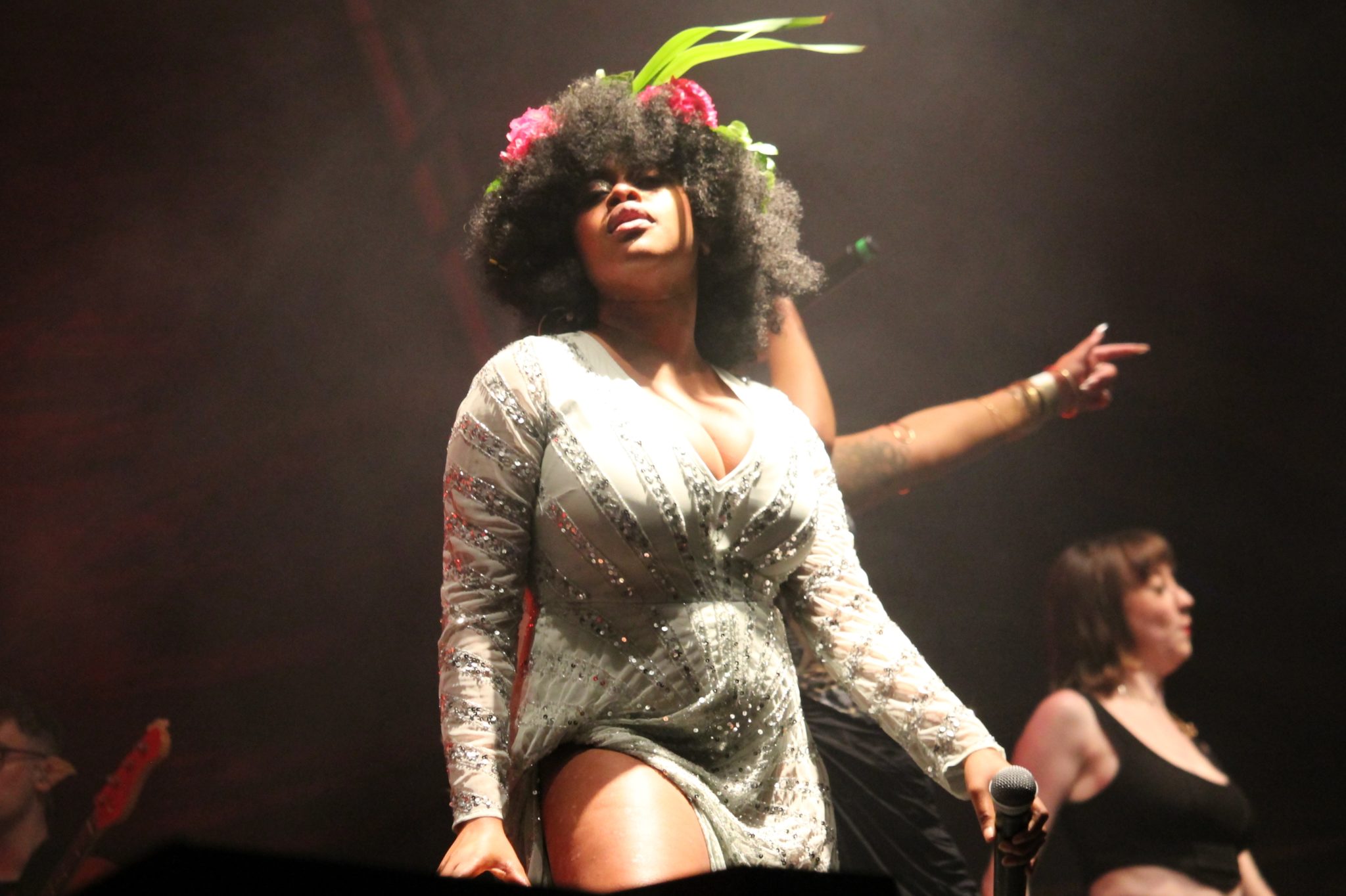 The rapper then turned their attention to Grimes, their friend and a wonderfully gifted singer, who they sang 'Pieces' with while choking back tears. Anyone who had struggled with mental health issues most-likely felt the same heart-wrenching tug as I, struggling to contain tears as Grimes took over the vocals for Chaila while the rapper held back waves of emotion. This poignant performance cut deep, with lyrics: "If I don't know what peace is, I still won't live in pieces," echoed around the Shannon-side castle. 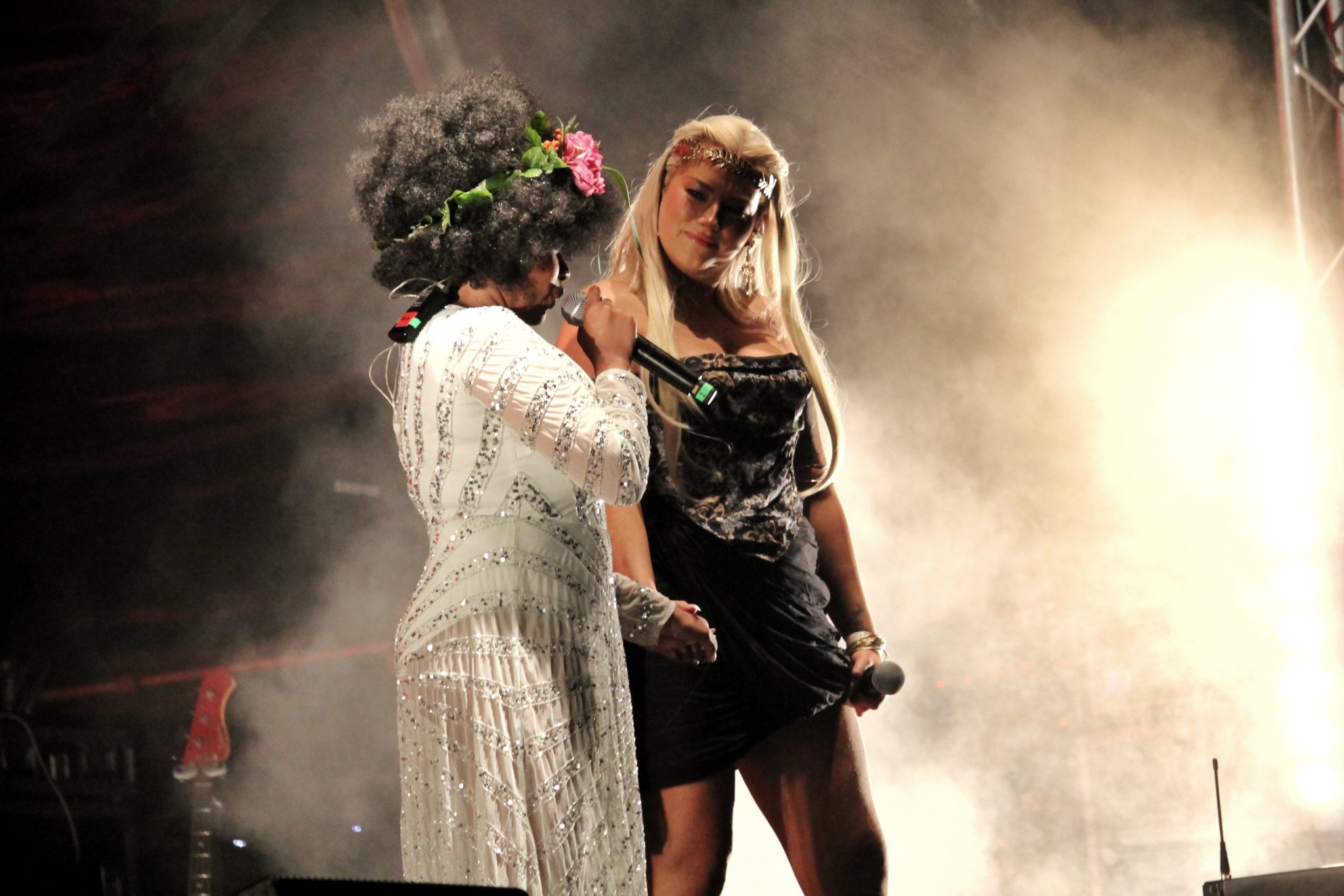 A brief interaction between God Knows and Chaila took place, where the show transformed from an highly-emotional sob fest, straight back into high energy rap with 'Anseo'. Dancers Annie Brown, Aoife Hennessy, Róisín Burke, and Robyn O'Riordan stormed the stage, adding to the chaotic brilliance. Stuck in the strangest emotional rollercoaster of both sobbing and dancing at the same time, 'Anseo' ran into 'Chaila'. Stopping the track a few bars in, God Knows addressed the crowd, demanding more energy. Chaila clarified the confusion admitting: "I got too emotional in the middle of the set and now we have two tracks left and this is one of them, so let's go."

The rapper couldn't have left the stage without performing the Limerick anthem '061'. "I did this at Glastonbury, but who fucking cares about that," the rapper joked before powering into this iconic track. Draped in a Limerick flag, with green and white lights flashing, Chaila alongside their crew gave this closing track their absolute all. 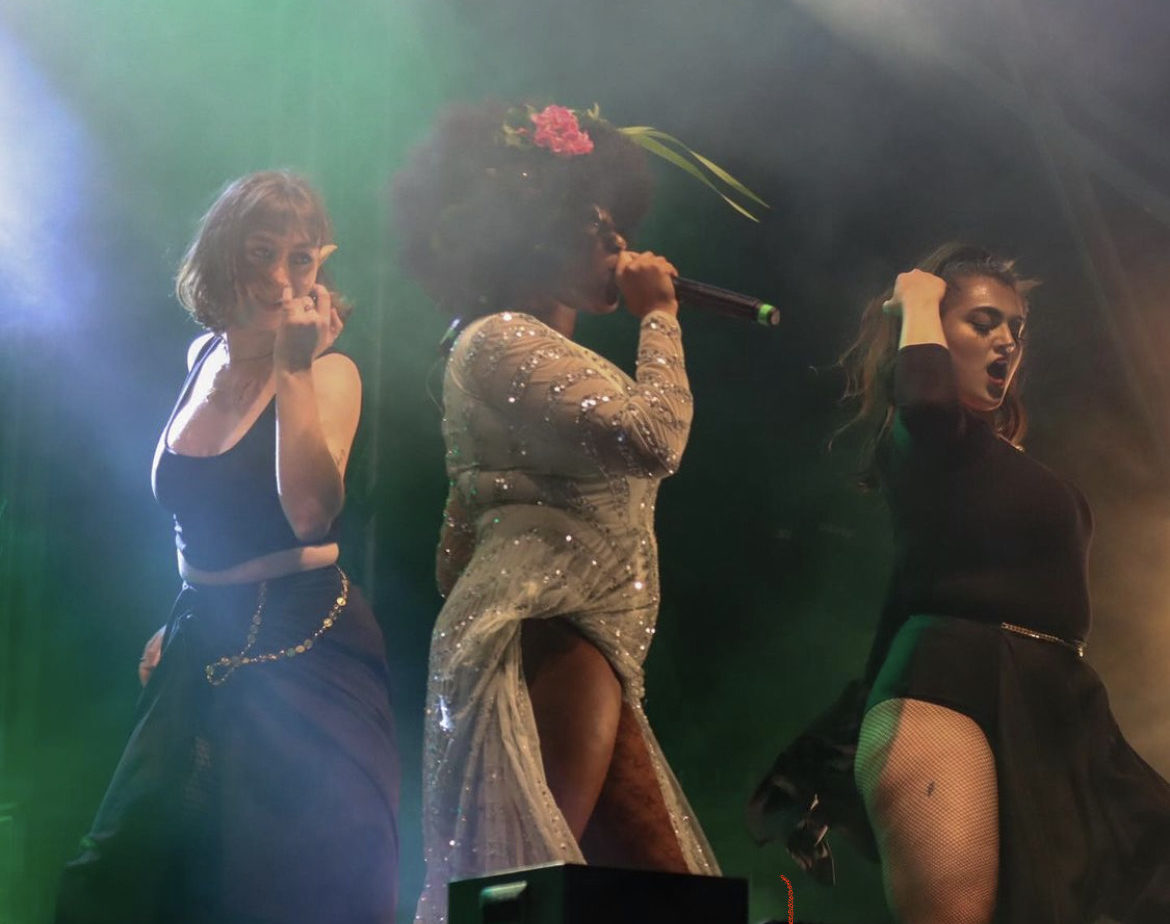 As the show ended, the magnitude of this performance really settled in. Emotionally drained, and feet aching from dancing on the pebbled courtyard, I watched crowds dressed in costumes traipse out the doors, realising the other-worldly experience Chaila had allowed their audience to experience. Posts from the gig dominated social media, speaking of the incredible crowd present, people complimenting strangers, taking the time to chat and dance with people they's never met.

This world that Denise created was special and magical, emotional and fierce, and no doubt not the last time we'll see this magnanimous star dominating Limerick's city and social media. Cementing their place as the King of Limerick, this is only the start for Chaila.