If you're looking for Tame Impala meets interplanetary exploration, search no more. Resting somewhere at the intersection of alternative, indie-pop and futurist lies Martian Subculture and his debut album, BANK PROLOGUE.

Outwardly conceptual, inwardly personal, the LP is full of looping instrumentals, electronic runs and swooping vocalisations. Meant to depict a bustling city on Mars, there's an undercurrent of reality behind the fantastical facade. For Evan O'Malley, the name behind the Martian alias, that's how he chooses to see life — filtered through the lens of another world.

Take the music video for 'Bumblebees,' a single cut from the project; alien-creature drawings wandered over film stills, transforming the everyday monotony of city-life into a snapshot of a different reality. It's all about perspective, and listening to BANK PROLOGUE is the best exercise in shifting focus.

"A lot of the concept came out of that, creating a fictional world out of reality," O'Malley said, calling from his Limerick home. "But at the same time, that city is really inspired by the place I live now, and moved to when I first began recording the album. Lyrically the songs are definitely quite personal."

Whether immersed in the swirling electronic chorus of 'Enter Martian Pedestrian' or the sparse yet  emotive exposition of 'Thin Lines,' O'Malley's production draws you in until you get lost in a whirling cosmos of sound — only snapping back to reality in the silence at the end of the track.

"Originally, the album was a good bit different, about a year ago or so. And instead of Bank Place being the first song, there was this different track called 'Blast Off,' which was very similar. And I wrote that as an intro song — 'Bank Place' is like a weird, alternate universe version of that song. I took 'Blast Off' and changed the melodies, using it as a reference to make a new intro song.

I really wanted to people to know that it was in a city. I really wanted to get that across without being too jarring about it. I think the city sounds at the start help, and the fact that the song is so short that it feels like an intro track. Naturally, the concept comes out through that."

"To me it was always the tightest song, with one of the nicer productions. It's not that pop-y or anything, so I thought it might not have taken off at all — it was a nice surprise it got so popular. I'd say it's my favourite song on the album.

I'm also recording a music video for this one, and the video is quite true to the concept of the song. The concept isn't super strong on this one, I was definitely focusing more on the music and production side of it. I was quite inspired by a lot of the stuff I've been listening to the past two years, like Tame Impala and Unknown Mortal Orchestra, which I think came through on this track."

"Making a music video for this one just felt right. It was the first single we put out, and I was very in the zone at that time as well. I did all the drawings and animations, and Elliot from the label put them all together into a video. I probably could have made that video for 'Bank Place' or the intermission song, but 'Bumblebees' just felt like a good fit for those types of visuals.

This is one of the one's that is quite different to older Martian stuff. The fact that there's no distinguishable guitars, and a very almost child-like drum machine instead of actual drum sounds. It also has this reggae influence, a dub influence almost that has definitely not been in older Martian material. It was nice to do something that different, but proved to still be recognisable as Martian."

"The intermission felt like it added a lot to the cinematic side of things — I feel like it solidifies the fact that this is a concept album about a city.

I have this distinct memory of watching the Ghandi movie as a child, and the intermission would come on and me, my mom and my brother would just stare at the screen for five minutes because we thought it was part of the cinematography or something. We didn't really realise that it was just like, a break. The song almost puts me into that, and makes you sit through that intermission. And then afterwards there's like a good minute of just city sounds to cleanse the palate for the rest of the album."

"'Soda Pop!' feels more like the B-side of the album. Not that the songs are weaker, or anything like that — but I always feel like the first bunch of songs on a good album have this freshness. And then when you're fully into the album, there's more of a darker tone or something.

'Soda Pop!' to me is more of a straight up pop song, and you're meant to be able to digest it more easily at that point in the album. I could totally see it as like a five or six minute long pop song, too."

"This was a song where I've had the chord progression since I was 15 or so. It was one of those things where I wanted to wait for the perfect point to use it — which is usually a fallacy, but worked out in this case. There were a lot of other versions that were a lot weaker without it, so it felt right.

I have this older song called 'Hard to Remember,' to me 'Bitter' is almost like a soul sequel to it. It's almost like an aesthetic homage to the older Martian stuff, where it's just guitar, bass and drums. It relies more on the sheet music — just clean vocals and things like that. That's probably one of the reasons why it sounds a good bit different, just because it's not very highly produced and there's a very limited amount of instruments compared to the rest of the album."

"I find it would be pretty boring if it was just 11 or 12 'Soda Pop!'s or 'Bitter's. I definitely like when there's a lot of contrast on an album. Like IGOR by Tyler, the Creator, it's a really good album because there's this huge amount of contrast. The first song I listened to was 'A Boy With A Gun,' and I listened to only that for like a month — and one by one you just fall in love with each song, because they're so different to each other. They don't mesh together in your memory. With 'Thin Lines,' it was nice to offer that kind if contrast to the rest of the album.

Within the song itself, too, the different parts are so different to each other. It's one where all the fat as been trimmed. It was seven minutes long, originally." 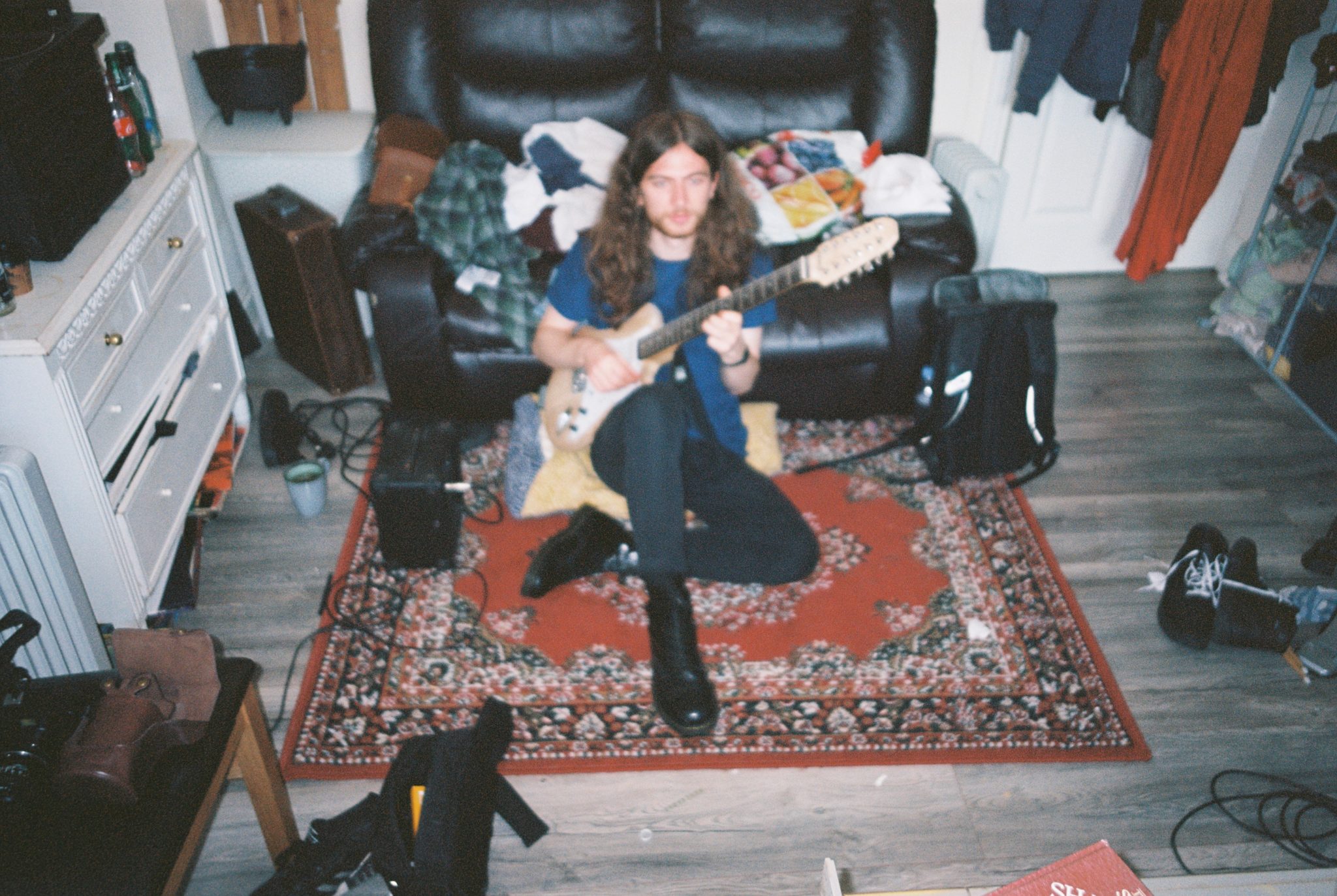 "Lyrically, the song itself was meant to be about certain people in my personal life like my family, and how I'm telling them they can call me anytime. It's a big problem in my generation where there can be a huge lack of communication within your own family. So many people I know, including myself, just hate phone calls — it's just easier to communicate over text. That ties into the phone call themes of 'Bitter,' with the voice message aspects as well.

The song started with a vocal loop that I made, and then I built the synthesisers around that. After I had recorded it, I already knew that it would be on the album. I recorded many, many songs in the past and some just find their way naturally into the album because they match the sound so well. 'Anytime' was like that."

A Hallway, but on Mars.

"It's almost like the closer of the album, where all the themes get tied up into one point, lyrically. I'm pretty sure it's the most lyrically heavy song."

It's like in a TV show, when you're on the second or third to last episode and you can almost feel all of the narratives being tied up — it gives a sense of closure. That was the main feeling behind it, giving a sense of finale before the album is over."

"There's something really thematic about this one. I could see it being at the end of a credits roll — spelled out in that exact same way. The truth is, I don't really know what Bank Street will even be. It might be an album, or by the time I come around to making it there could be a much higher budget. It could be a mini animated series or something like that. Whatever it is, it will definitely be a more realised version of the city.

This album, when I started making it was actually called Bank Street. And thematically that's meant to be a street in this fictional city. I just dialled it all back a bit and decided to make this a prologue to that — and I just liked the whole teaser type vibe of the album.

I've learned making instrumental tracks, that after you've gotten used to the sounds and things you know exactly the colours of the song. You know exactly what kind of scene it would go along with. So every time I make an instrumental for this album, it's obvious to me that whether or not it actually belongs on the project. That's how I felt about this one — the scene belonged on the album."

Tame Impala and Diana Ross collab for ‘Turn Up The Sunshine’ soundtrack feature
The Sugar Sessions: The Sugar Club to host new series of folk and trad gigs
Suki Waterhouse: "I remember filming Love, Rosie fondly, suddenly I was on set with Lily Collins and Sam Claflin having the time of my life in Dublin"

Colm Bairéad on An Cailín Ciúin: "I've never made anything that was completely in English. That’s borne of my upbringing – I have Irish and I love Irish"
On Our Radar Q&A - Spider: "I’m very loud about the lack of people of colour in the alternative genre and mainstream media"
Exclusive: Legal Advisers to the National Maternity Hospital Act For Roman Catholic Hierarchy and for A Majority of Ireland’s Religious Orders
The Derry Girls bonus episode – Great stuff altogether
Louise Mulcahy awarded Liam O’Flynn Award for her pioneering work as an Irish traditional musician
Tech Reviews: Elden Ring, Galaxy S22+, Sony LinkBuds & Galaxy S21 FE 5G