It’s hard to understand why a different “foreign” R&B mess gets flung up the pop charts every week when we have people like Wyvern Lingo at home making records of a similar bent only much better. This year’s debut album is fantastically good and should be forced on every ear until the people hear it and agree. They’re a good fit as tonight’s support, and obviously thrilled to be here – as they gush a few times - making a big noise for a three piece as they run through the album’s highlights. I’ve said it once before but it bears repeating – if the likes of Beyoncé released anything nearly as good as ‘Out Of My Hands’, new single ‘Crawl’ or chorus-of-the-year ‘Maybe It’s My Nature’, it would be an instant world-wide smash from which no one could escape. By the time Caoimhe comes out from behind the drums to join Karen and Saoirse for the closing ‘I Love You, Sadie’ – another melody from the Gods – punters are turning to each other and enthusiastically asking “who are they?”, surely the sign of a successful support slot.

A big flag with Grace’s head on it is draped across the back of the stage so Ms Jones can get in position – she’s not human like the rest of us so she can’t be seen walking out from the wings. It drops as the band kick in to ‘Nightclubbing’ to reveal the queen in all her splendid glory – she’s got a golden skull mask on her head, sci-fi googles, a cape (of course), ahd she's covered in a zebra print paint pattern, stood behind what looks like the kind of barrier they used to have on Hill 16. This icy version of Iggy’s tune instantly transforms the cricket pitch in Trinity, of all fucking places, into the kind of euro disco you’d read about but never have the balls to go into. When she sings “We’re what’s happening” you know it’s not up for debate. 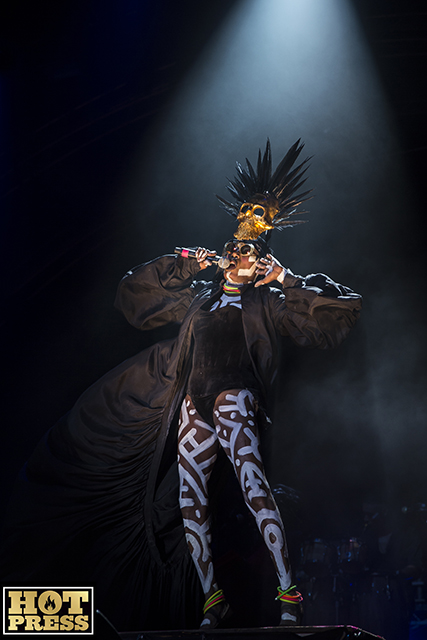 “I’m back again” she lets us know, slipping into her thick native Jamaican patois before ‘This Is’ and then into ‘Private Life’. When Grace, now sporting what looks like electric tinsel around her neck, tells you she’s bored with your theatrics and she only pities you, it’s time to bury yourself in a deep hole and never come out, as the band scrape out the noise Marianne Faithfull made on her equally scathing ‘Why’d Ya Do It’. It’s a sound they continue with for ‘Warm Leatherette’ as Jones crashes out the beat, stood as she is between two cymbals. She’s got some sort of sex chainmail on now and only Grace Jones could make the lyrics about sex and car accidents, inspired by J.G. Ballard’s Crash, sound like the best idea you ever heard.

Another costume change, a ballroom dress that makes her look like the previously unknown member of the Cinderella family that’s into a bit of S&M, so she can perform a one woman elevated waltz to ‘I’ve Seen That Face Before’. She innocently asks if weed is legal yet in Ireland before ‘My Jamaican Guy’, sung in an orange cape, naturally.

It’s only very recently, on the recommendation of Ireland’s disco queen, Kelly-Anne Byrne, that I first heard ‘William’s Blood’, an epic song that Jones co-wrote with former Prince pals Wendy & Lisa, about her thorny relationship with her religious father and her belief that her artistry comes from her mother’s side of the family. It’s an incredible piece of work and its delivery here indicates that it might just mean that bit more to Jones than the better known numbers which surround it. It’s also a fine showcase for the enduring power of her rich voice which has lost little of its timbre.

‘Love Is The Drug’ is an industrial disco sledgehammer, a series of coloured lasers shine down on Jones’ mirrored bowler hat – imagine if Slade’s Noddy Holder got a job in the city and had to alter his chapeau accordingly – but ‘Pull Up To The Bumper’ really gets everyone throwing the shapes. Even your correspondent lost the run of himself and gave it a serious bit. My companion, Ms Gleeson, videoed the whole thing. That’s going to cost me some money to cover up. My dancing, as good as it was, was very much overshadowed by the rather fitter young man working a stripper’s pole on the stage, and both he and Jones resembled Day-Glo zebras in that famous Keith Haring body paint.

For the closing ‘Slave To The Rhythm’ Jones works a neon hula-hoop – for the entire song. We’ve seen her do it before but that doesn’t make it any less impressive, especially as she manages to keep it going while she introduces the band. She really is a fine lump of a woman, not to mind whatever age she is, and before you start writing letters and calling Joe, I said the same thing about Kristofferson a few weeks ago, so relax, all are equal in my eye.

What Jones gave tonight was a lesson in star power. I suspect, in fact I know, that she could have walked out on stage and just stood there for five minutes and still got a standing ovation. What she did instead was bring along a crack band and run through a savage set of tunes. Us mere mortals were not worthy. 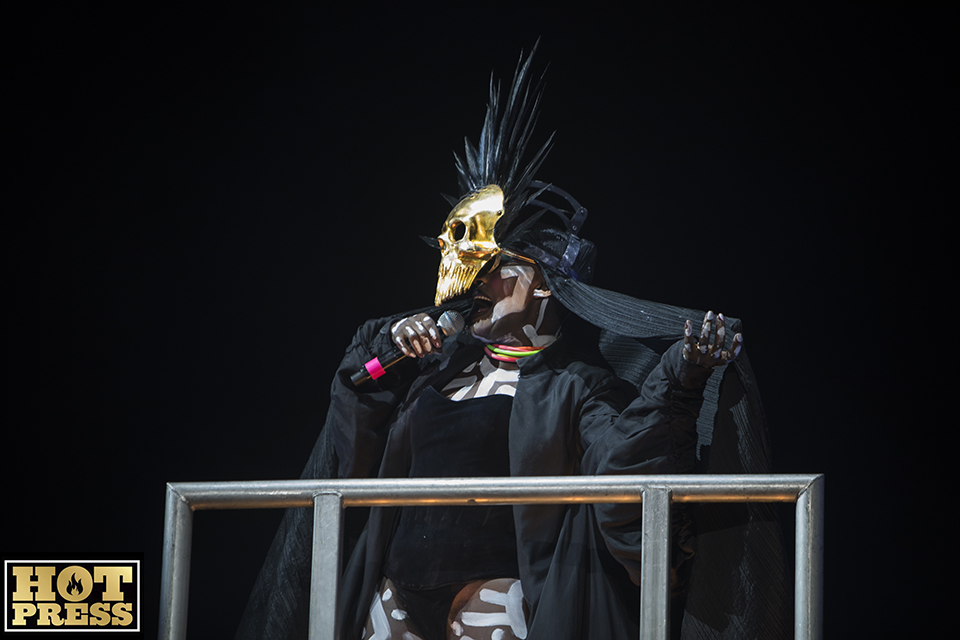