As the fourth edition of the Irish festival is just around the corner, let's take a closer look at what makes it so special before discussing its origins with one of its main organisers, Rob Barrett.

Fuinneamh - which means 'Energy' or 'Spirit' in Gaelic - is not like any other Irish music festival. Besides featuring a stellar line-up of both local and international acts - which you can read about in Hot Press 'She's Electric' latest column - it conceptually explores ancient wisdoms and traditions.

The festival prides itself on its immersive multi-sensory audio visual stage designs and overall cosmic and spiritual vibe. This year's theme is 'Yin and Yang - The Ancient Philosophy of Dualism'.

Fuinneamh's organizers have decided to try and recreate this notion of balance while celebrating the Gaelic language and Ireland's Celtic mythological figures.

The event will spread out over four different areas, three of which symbolise the Yang energies:

Ogham Alignment is the main stage, which name refers to the Tuatha dé Danann - People of Danu - a supernatural, magical race in Irish mythology. Those beings of divine nature were widely worshipped and said to have great knowledge of the cosmos along with a deep respect for a all forms of life.

The Ogham Alignment stage is intended to represent their first Temple, a sacred place of immense energy where they would come to learn ancient wisdom and drew power from the Temple's 12 surrounding Ogham crystals.

The Keep Her Lit stage is the second biggest stage at Fuinneamh, referring to the history of the festival itself. It all started with friends organizing parties in the Wicklow Mountains years ago. Dubbed "Keep Her Lit" at the time, those eventually were turned into what now is a superb, out-of-the-box festival.

True to its roots, this stage will feature a really diverse line-up, as eclectic as the music which used to be played at those parties. Expect a sound ranging from deep disco to melodic techno & house to deep grooves.

Referring to the cosmos, the Cosmaí Ceol stage will feature a huge GeoFace Skull - a visually mesmerizing ornamental piece which has been Fuinneamh's main flagship since its inception. This wooded area will be host to all the Psytrance, Progressive and Drum'n'Bass acts. 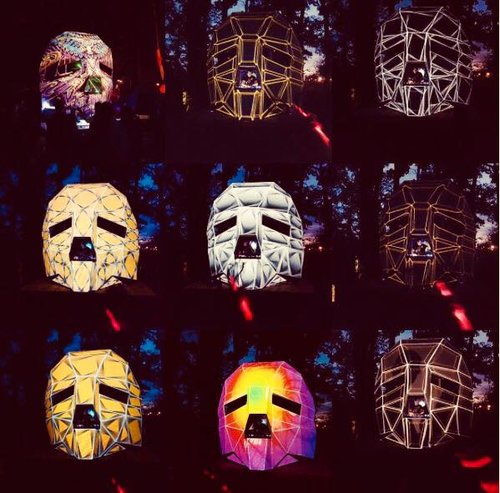 "We want to shift the paradigm around festival waste and furthermore shine a light on environmental awareness and sustainability making sure that we are together fighting for a better future for this planet," says the official Fuinneamh website.

"In doing this our goal is to create a festival which inspires balance in the lives of our patrons. Balance for ourselves, balance in our relationships with one another and balance in the relationship we have with our planet. We believe that both sides need to be honoured for energy to flow harmoniously and without resistance. This in itself is what our festival has always been about. Fuinneamh - Energy".

We caught up for a chat with one of the event's main organisers, Dublin-based Rob Barrett, who tells us more about the history of the festival.

Fuinneamh began way back in 2012 under the name Keep Her Lit which was a series of open-air parties in the Wicklow Mountains which showcased Ireland’s growing techno & house talent to audiences in unique settings with big sound systems and no closing times.
From there, an idea was formed and after many years of work and study in the event industry, we decided to create something on a larger scale and Fuinneamh Festival was born. It has always drawn its inspiration from notable European Festivals such as Fusion, Boom etc. where immersive stage design and freedom of expression are central concepts.

What do you reckon makes it stand out from other Irish festivals?

Described by patrons as the festival that almost feels like you’re in a field with just your best friends for two nights. They also say it’s like Knockanstockan for electronic music lovers. These are some of the things we’ve heard that we really liked. We’ve also had people send pictures of their Fuinneamh tattoos! Personally, I think it’s our attention to detail, stellar lineups and connection to ancient Irish culture that resonates through our stage backstories and Festival aesthetic that people are drawn to.

How did it evolve along the years so that it now gets international acts?

We initially booked a completely Irish lineup, but as the Festival has grown and the team has expanded we decided in 2018 to book a carefully curated selection of international acts who we feel fit the style the of the Festival. That’s why you’ll see a lot more acts you wouldn’t normally at other electronic Festivals. This year in particular we’ve partnered with massive Irish collectives Research, DSNT and Altered Events to bring our biggest show yet.

Fuinneamh has been officialy summed-up as the following:

A beautiful weekend ahead in Dundalk, which will bring the curtain down on the fantastic festival season which took place in Ireland all summer.