Dropkick Murphys have released the first single titled 'Two 6’s Upside Down' from their forthcoming album This Machine Still Kills Fascists. The track is accompanied by a music video releasing at 3pm today, July 6, which you can view below.

The band announced they would release This Machine Still Kills Fascists in late June. The album is set to release on September 30 via the band’s labels Dummy Luck Music / [PIAS]. This album will be unlike any released by the band before, claiming to bring "Woody Guthrie's words to life."

According the album's description, the collection of 10 songs will bring Guthrie's lyrics – many of which date back to the '40s and '50s – into the present day. However, Dropkick Murphys have ditched their electric guitars, and claim "not a single amplifier was used to animate Woody’s words in these songs."

'Two 6’s Upside Down' is a "forlorn gambler's lament, awash in love and loss, murder and punishment," according to a press release. Dropkick Murphys’ founder Ken Casey explains: "'Two 6's Upside Down' is acoustic, but it's still tough. It's edgy and these lyrics are menacing. We just wanted to show right out of the gate that even though this album is acoustic, it's still going to have some fire.”

The video for 'Two 6's Upside Down', directed by Dave Stauble, shows the punk outfit performing the song while gathered around the Woody Guthrie statue in Woody's hometown Okemah, Oklahoma. The performance is interspersed with clips of the band debuting the song before European festival crowds this earlier this summer.

Casey continues to explain the concept behind This Machine Still Kills Fascists, saying: “The project has been a long time in the making. Nora Guthrie thought her father would’ve got a kick out of us, would’ve liked us, that we were somewhat kindred spirits so to speak, which to us was a huge honour."

Woody’s daughter Nora has been curating a collection of her father’s never-published lyrics for the band for years.

"I collected lyrics on all kinds of topics… lyrics that seemed to be needed to be said – or screamed – today," Nora explains. "Ken Casey is a master at understanding Woody’s lyrics, which can be complicated, long, deadly serious, or totally ridiculous. DKM is capable of delivering them all."

Dropkick Murphys' James Lynch adds: "Nora gave us the privilege of going through the archives and selecting some lyrics to use. The common thread that I see through everything was this love for people and this understanding of the universal truth that there is no one person fundamentally better than another person."

Dropkick Murphys divulged they had so much material to work with from Woody, they had to develop two separate albums. Vol. 2 will be released by the band in 2023.

Ken Casey goes on to describe Woody Guthrie as "the original punk."

"He went against the grain, he fought the good fight, he spoke up and sang about his beliefs," he resumes. "I’m motivated by reading what he wrote and am inspired by his courage. One man and a guitar – it’s powerful stuff.”

Dropkick Murphys and their longtime producer Ted Hutt recorded This Machine Still Kills Fascists at The Church Studio in Tulsa – just a few minutes from Woody’s birthplace, and the modern-day Woody Guthrie Center.

Dropkick Murphys play The Telegraph Building in Belfast on January 13, and the 3Arena in Dublin on January 14.

Check out the video for 'Two 6's Upside Down' below. 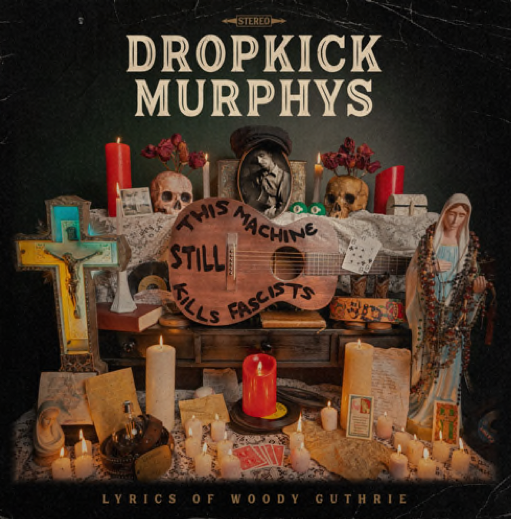 Track of the Day: The Rosecaps - ‘The Wall’
VIDEO PREMIERE: HamsandwicH share new video for upcoming single 'All My Blood'
Bono to discuss new memoir at Cheltenham's 2022 Literature Festival