Navigating social media during a global crisis is something most of us are now familiar with, for obvious reasons. The subject sparked the imagination of Dubliner Catherine Prasifka, and feeds into her debut novel None Of This Is Serious, focusing on a twenty-something woman with a chronically unstable life.

Student life is ending for Sophie and her clique of friends. She feels left behind as they go on their separate paths, with her best friend overshadowing her, and a manipulative identical twin effortlessly getting by. As if that isn’t stressful enough, Sophie’s been in love with the frustrating Finn for as long as she can remember, before she meets Rory, who is suddenly available to her from the safety of her screen.

Gradually the character’s world shrinks and becomes a consistent cycle of endless scrolling. From toxic relationships and poor self-image to female friendships, None Of This Is Serious touches on all the worries familiar to millennials and Gen Z.

Prasifka initially studied English Literature at Trinity College Dublin, before heading over to Glasgow to complete an MA in Fantasy Literature. During the pandemic, she commenced her quest to get published.

“Writing a novel is something I’ve always wanted to do, but it’s a hard path,” Catherine tells me during a sit-down in HP Towers. “When I graduated, I figured I’d get a job in a field I don’t particularly care about, gather some life experience, and then write an interesting book people could identify with. Then life wouldn’t give me experience! I was already writing before the pandemic, but lockdown drove me to work on the book seriously. There was nothing else to do.

“I didn’t have that many connections in the publishing world. I didn’t really know the difference between an editor and an agent. No one would really tell me! I was just frantically Googling, but eventually I was put in touch with the person who would become my agent. Luckily, she believed in the book.”

Interestingly, lack of self-belief is one of the anxieties explored in None Of This Is Serious. Protagonist Sophie experiences spiralling negative thoughts about herself throughout, spurred on by the verbal invalidation of her confident best friend Grace, who consistently makes her feel worse despite offering “advice”.

“It was frustrating to write because of the way I constructed the character, who is totally trapped inside of her head,” Catherine nods. “Sophie always sees the worst possible outcome of any situation. I’ve been in a similar mindset at times, but never constantly. When you’re a female novelist, people assume I’ve just written myself as a character. If you spend five minutes with me, you’ll realise I’m not at all like Sophie. I wanted to shake her and tell her to get over it, but because of her lack of perspective or perceived agency, she doesn’t feel there’s any other choice.”

These deep-rooted feelings of failure and lack of self-worth only grow in severity as a result of social media, which acts almost as a second narrator throughout the book.

“I knew from the start that I wanted to include lots of social media in the story,” Prasifka adds, noting the text interactions that break up the prose paragraphs. “I didn’t want the internet acting as the main plot point, it needed to be interwoven throughout the narrative. Our lives aren’t about being online, it’s just that we’ve increased screen time. That was something I was thinking about in terms of contemporary fiction, this focus on representing reality as it is.

“There seems to be a glaring oversight because there aren’t many books published dealing with social media. At that point, I was about 23. I figured I could pen a unique book that maybe only someone who grew up online could write. The language of the internet is bleeding into fiction because it’s changing how we speak to each other and write.

“Ultimately, I do think that social media is ruining our society. I don’t see how we can divorce ourselves from it, as all of the problems with social media are built-in features. Instagram’s settings prey on everyone’s insecurities, but mostly women and teenage girls. That seeped into the novel.”

Many of Sophie’s pessimistic thoughts relate to her body.

“The whole turning point of the book was uncertainty and anxiety,” says Prasifka. “I don’t believe it’s possible to write a book on social media that doesn’t include body image. Even the most confident, self-aware person experiences negative thoughts about that. You can just completely change your face shape with filters nowadays. It’s engrained by society that you want to look attractive to others. Sophie isn’t really aware when she’s engaging in self-destructive behaviour brought on by society-driven thoughts. I remember covering Bridget Jones’ Diary in college, where she logs her calorie count at the start of every chapter. Every single woman is constantly aware of her body, and how others want it to look.”

Sophie’s relationships with men also damage her self-worth. Rory is your typical ‘nice guy’, in contrast to the unavailable Finn who uses Sophie for emotional labour. Rory’s the guy your friends tell you to go for, but is he all that he seems?

“With Rory, I wanted to give Sophie a little bit of hope,” says Catherine. “The ‘nice guy’ exterior just didn’t feel authentic. It felt like he was covering up something. The novel highlights the dissonance in how Sophie feels about Rory online versus in person. She’s never really comfortable around him in real life, but she likes talking to him to plug all these anxieties like a giant hole inside of her. What she doesn’t get from Finn, she nearly gets from Rory. That’s something very toxic we do in relationships. We try to get exactly what you need from people and don’t really think about their lives.

“I’m not interested in specific character traits, but dynamics. I wanted to talk about the softer side of misogyny, rather than more serious situations, like domestic abuse. I wanted it to be the casual way that men talk about and treat women. I had to have a few shit men in the mix to have those conversations.”

With praise from the likes of Naoise Dolan, Louise Nealon and Emma Gannon on the cover, does Prasifka worry about being put in the same, narrow-minded box as fellow young Irish female authors like Niamh Campbell, Megan Nolan and Sally Rooney?

“It’s a mixture of emotions,” she says. “These women are all great, and to be compared to them would be incredible. I’m lucky that there’s a market for this type of fiction, because it means that all these books got published. I’ve definitely gotten a leg up because of that. But wouldn’t it be nice if we started listening to all kinds of marginalised voices, and emphasised how many books are missed? I’m fortunate that I happened to be in a marketable demographic at this point in time, but comparisons are unimaginative. A lot of these books are extremely different.

“More than one story can happen to an Irish woman! I wanted to set it in Ireland and write about someone who’s twenty-something, because that’s the world I’m familiar with. It kind of falls into that place where people will go, ‘Well, we had an Irish woman last year, do we have to have another Irish woman?’ If you’re tired of this demographic, it’s not the book for you. Every young Irish writer I’ve spoken to, like Naoise and Louise Nealon, have been really kind and supportive. That’s great on an individual level, but then you look at how society tends to treat groups of women as a category and it’s a mixed bag. It’s a double-edged sword.”

Prasifka elaborates on the subject.

“It’s also a limiting and untrue characterisation to say that we’re all the same,” Prasifka continues. “Michelle Gallen is also a white Irish writer who went to Trinity, but she’s never included in the list of these up-and-coming writers. The supposed trend is often just carefully curated Venn diagrams that serve a purpose for animosity, where you can say, ‘Oh no, not another one’ – as if there are too many of us. But when you look at similar demographics of men, I don’t feel like there’s that same criticism.

“Of course, it seems to be the most privileged of the disadvantaged group that gets opportunities,” she posits, referencing white women of a certain class. “What I can do is hopefully lift up people who don’t have the same level of privilege as I do. ”

• None Of This Is Serious is out now, published by Canongate. 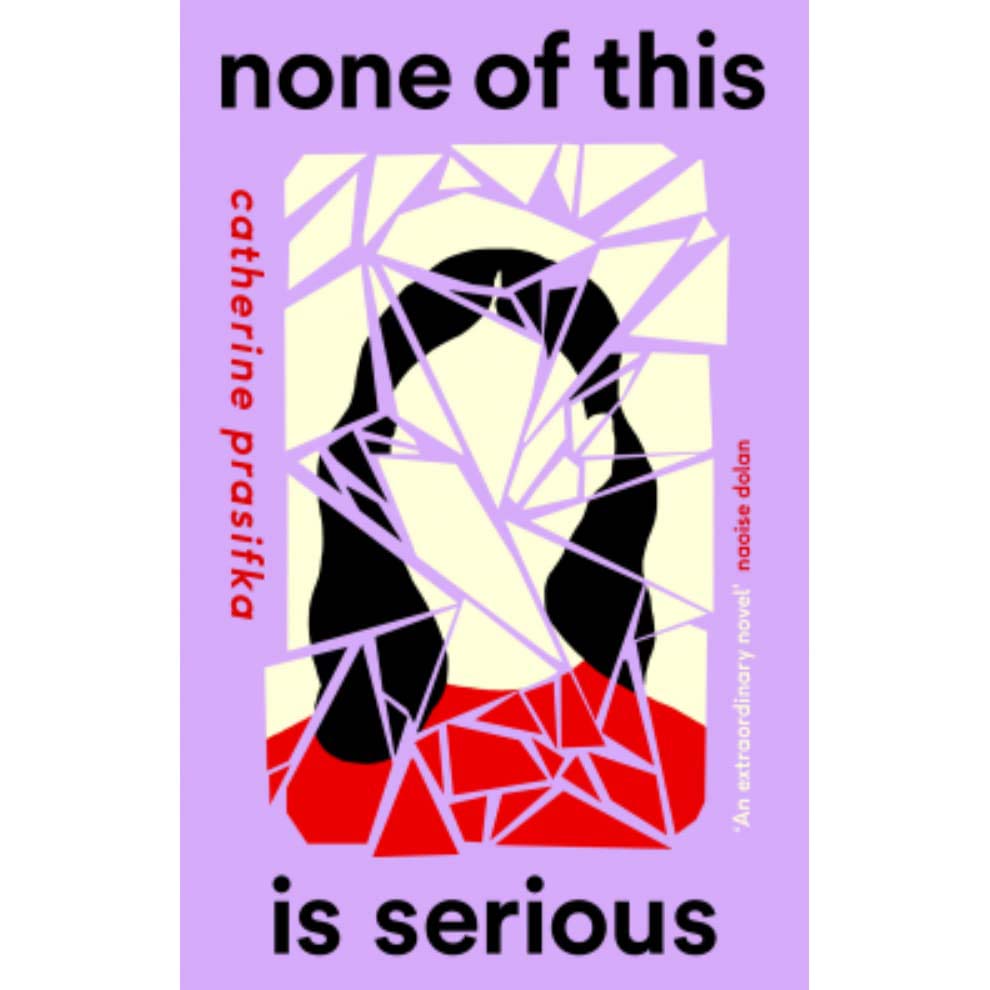 'None Of This Is Serious' by Catherine Prasifka.
Share This Article: