Carrickfergus-born Adrian McKinty gave up his career as a novelist when he was evicted from his home in Australia and was forced to work as a barman and Uber driver to get by. Now, he’s found himself on the New York Times bestseller list with his nerve-shredding new crime-thriller, The Chain.

It was nearly 12.30AM after a busy working day almost two years ago when Adrian McKinty got his first call of the night from a well-known American literary agent.

“I’d had the worst, most complicated day and I get a call late at night,” Adrian begins, talking to Hot Press in the outside bar of the Merrion Hotel on the hottest day of the year. “I pick up the phone and this guy says in this big, strong American accent, ‘Hi I’m Shane Salerno. I’m calling from Hollywood, California. I’m Don Winslow’s agent’.

“Don's a good friend of mine, and he's obviously a successful writer in his own right, but this guy on the phone immediately rubs me the wrong way. He’s talking about how he can turn my career around. All the things he can do for me. I listen to him for ten minutes then I decided I’m tired and I tell him ‘Please don’t take this the wrong way but I’m gonna hang up with you.’”

The context behind this is that a few days earlier, Adrian – author of over a dozen novels, most of which are locally popular crime thrillers set in Belfast– had published a blog post saying that he was taking a break from his writing. Despite having won multiple awards throughout his career and being highly respected in the genre, the novels weren’t paying the bills. Immediately after publishing the post, Don Winslow reached out to him for encouragement. When that didn’t work, Don set his agent on him.

“I hang up on Shane,” Adrian continues. “I don’t want to listen to anything he has to say. I get half way up the stairs and the phone rings again. ‘Please don’t hang up on me,’ he says. ‘Google me. I’ve helped lots of writers.’ I tell him again, ‘Don’t be offended. I don’t want to hear it. Don’t call me back.’

"I almost make it up the stairs again when I get the third call. ‘What exactly is the issue here?’ he says. ‘The issue is I’m not a writer,’ I tell him. He says, ‘Let me ask you one question – do you have an American story in you?’” 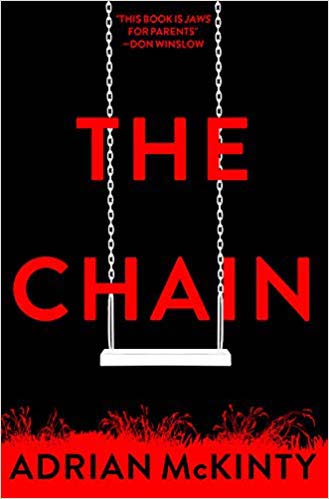 As it happened, Adrian did have a nebulous idea for a story set in America. He’d spent some time living in Mexico City, where he’d learnt about the practice of ‘exchange killings’ – where a person offers to swap themselves for a kidnapped family member while a ransom is raised. He also had memories of receiving chain letters as a kid, the sort that would come with some grimly horrific story and tell you that something bad would happen to you if you didn’t send it on to someone else (the modern-day incarnation still does the rounds in emails and on social media). He’d had an idea that this could be turned into an interesting story set in the States.

“I pitch the premise to him,” Adrian tells me. “And he says, ‘That’s the book! Send me that book! Write the first chapter.’ I’m still trying to tell him no. Then he says, ‘Look Adrian, I can see that money’s the issue here. I’m gonna wire you 10,000 dollars’.”

If the phone calls weren’t enough to tell him how persistent the agent was, the money certainly did it. Dazed and tired, Adrian got to work on the novel he never thought he’d write just as soon as he’d finished the phone call. After a rigorous few months behind the computer screen, he finished The Chain in the summer of last year.

The novel itself is set in present day Boston. It tells the story of Rachel Klein, a philosophy lecturer whose daughter has been abducted. The only way to get her back is to pay a ransom to an unknown Bitcoin account and abduct someone else’s child, forcing them to do the same thing. It’s a fiendishly clever concept; a gripping story that capitalises on how vulnerable we all are in the Internet Age, as well as a powerful an examination of the ways in which morality and civility can be upended when circumstances dictate.

The book had been heavily promoted leading up to its release, and it boasts cover quotes from everyone from Ian Rankin to Stephen King. Still, as Adrian knew too well, it’s never a sure thing that a book will actually sell. Surely it must’ve been an incredible moment when he saw it appear at No. 7 on the NYT bestseller list on the first week of its release?

“I literally screamed,” Adrian laughs. “I think I was on my way to Waterloo Station and my publisher called telling me. I asked what number. They do it 1-15 on the bestseller list. So I thought, ‘You might be able to scrape in at 15 if you sell 2-3,000 books’. That’s fine, because if it appears at 15 or whatever, then whatever you write for the rest of your career you can have ‘New York Times bestseller’ on the cover. But No. 7, I could not fucking believe it. I actually thought – this is what I really thought – ‘I bet you I’ll get 16. I bet it’s the 16th best-selling book and I won’t make that list’. I’ll just be sitting there, years from now, grandfather in my rocking chair, saying, ‘I almost made it kids! But that Jo Nesbo – he thwarted me again!’”

The success was even more meaningful considering that – despite his books about the Belfast detective Sean Duffy books being critically lauded – the main issue for Adrian had always been getting his novels onto, and off, the shelves.

“I was done with writing,” he shakes his head. “Completely done. With the Duffy books – I thought they were the books I’d been put on the earth to write. They were important, they were about Belfast. I’d watched every film about the troubles in Belfast and I thought they were all bullshit. They were all such clichés. No one ever had a sense of humour. My sense of Belfast in the 1980s was that people back then had a very black, dry sense of humour. None of the American and English screenwriters was showing that. So that’s what I did with the Duffy books – six of them. I was really proud of them – and it hadn’t worked. So I thought, ‘Yep, I’m done’.”

Thankfully, Adrian wasn’t done. Now, it seems he’s far from it. As well as being on the NYT list, the author has also signed a seven-figure film deal with Paramount Pictures for The Chain. Is he going to be involved in making the film?

“No I don’t think so,” he says. “A book of mine was optioned before by Paramount when I was a bit younger. I didn’t know anything and I got very involved in the writing and casting and I 100% believed that the film would happen. Then when the whole thing fell apart, I was gutted. So this time I’ve learnt my lesson and am not gonna be involved in any way. We’ll see what happens with it.”

On another note, Literary Twitter was ablaze the day before I meet Adrian, after a quote made by Irish author Colm Tóibín was shared in which he outright dismissed crime writing and genre fiction. What did Adrian make of that?

He shrugs casually. “Ah, I dunno. With Colm Tóibín – his big thing is ‘I only write highfaluting literary stuff’, but the book he wrote before Christmas, Mad, Bad, Dangerous To Know, was a little stocking filler – so he’s not amiss to doing that type of thing. But I mean, everyone was jumping on him for that quote. I don’t feel like jumping on. If he doesn’t like crime fiction – I don’t care. He’s not gonna care if I don’t like his books.”

But is there a wider issue of crime writing being dismissed or condescended to by literary critics?

“That used to be the case, maybe about ten years. I think that there was a time when people thought crime fiction was all pulp and nonsense. But I think the genre is so diverse now. There’s literary crime, their scandi-noir. You’d have to read a lot to dismiss an entire genre.”

The Chain is out now on Orion.

Live Report: The Murder Capital bring incendiary energy to [email protected]
MASI criticises government for treatment of asylum seekers: "Ireland must uphold the law"
The Fabelmans' Gabriel LaBelle: "You’re aware that you’re on-set with masters"
PREMIERE: 'My Reading Of It' – Joseph O'Connor shares a fascinating chapter from My Father's House
Education Special: Joseph O'Connor – "People should be encouraged to study, within the limits of rationality, what they want to study"
Irish magician Aidan McCann earns coveted “golden buzzer” on America’s Got Talent: All-Stars