At first glance, it may not seem hugely important that the Department of Justice admitted to having made a mistake in its account of a coronavirus outbreak in the direct provision centre in Cahersiveen. But when even that revised account is dismissed by residents, then it suggests that major changes are necessary at the Department…

The Department of Justice has admitted that it made a ‘mistake’ in its account of how the outbreak of coronavirus in the controversial Direct Provision centre in Cahersiveen, Co. Kerry had occurred.

The Department told The Irish Times that – after “further investigation” – it had discovered evidence that a male resident at the centre had in fact begun to show symptoms of coronavirus shortly after being transferred to the Kerry-based accommodation. The resident was required to self-isolate.

The Department also clarified that the person had not been transferred, as rumoured, from Travelodge in Swords where an outbreak of coronavirus was originally confirmed early in March.

Fianna Fáil TD Norma Foley had previously asked the Department about the matter. At the time, the Department was adamant that no residents manifested symptoms of the virus for ‘well over a fortnight’ after being transferred to Kerry.

Now, however, the new admission made by the Department has been dismissed as just another half-truth by residents at Skellig Star Hotel.

“They are still not telling the whole truth,” one resident told Hot Press. “It is as simple as that.”

Speaking to Hot Press, residents have insisted that there was a further incident in which infection occurred very shortly after a woman was transferred to the Centre. The asylum seeker, who is of African descent, developed a dry cough in late March. The woman, who had been transferred from Ballsbridge Hotel in Dublin to Cahersiveen on March 18, experienced a significant decline in her health by the beginning of April.

“The woman fainted during that period,” the resident recalled. “Her room-mate raised the alarm, but she was left in the same room as the resident who was sick – although she had asked for a change of room.”

Hot Press understands that the woman who was unwell was finally placed in isolation on April 4. Later she tested positive for coronavirus. A subsequent test revealed that her roommate had also been infected. Ultimately, 25 people became ill with Covid-19 at the centre.

Responding to Hot Press, a spokesperson for the Department of Justice said that "the department does not comment on individual cases.” The statement added that the privacy of residents is of paramount significance for both the Department and the HSE.

On Tuesday of this week, Cahersiveen locals staged another protest outside the town’s Legal Aid office, asking for the abolition of the country’s Direct Provision system. 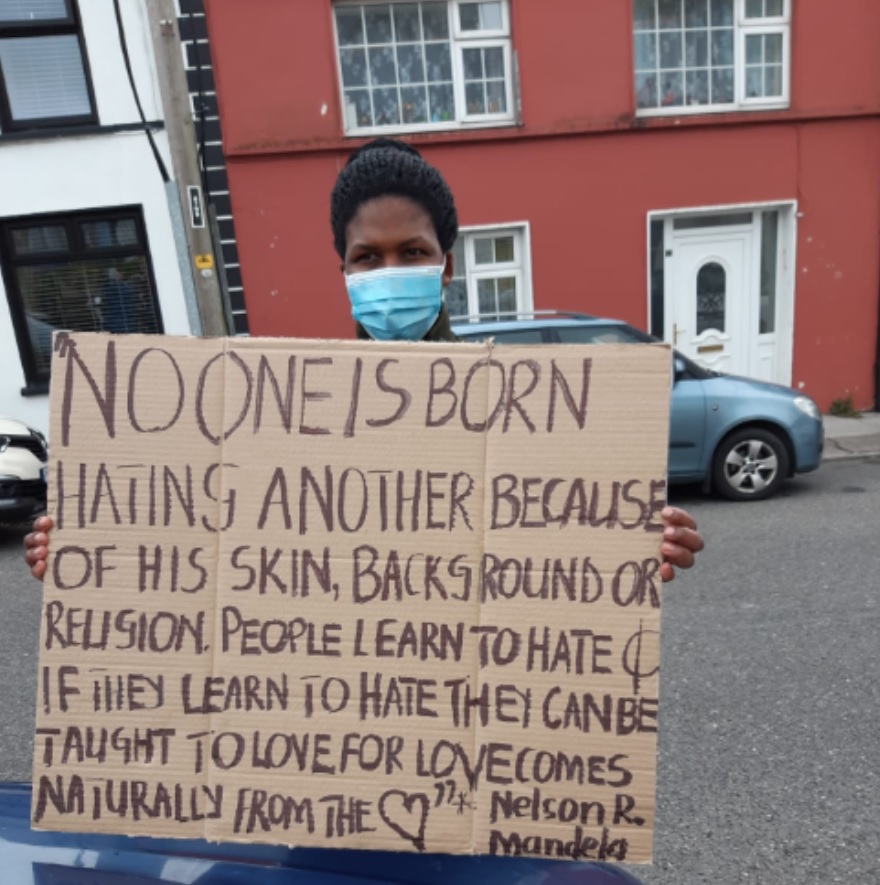 The Cahersiveen community has also called on the Minister for Justice, Charlie Flanagan TD to step down from his position over the handling, by his department, of the coronavirus outbreak at Skellig Star Hotel.

Since April, Charlie Flanagan has been under mounting pressure to reform the country’s system of housing asylum seekers.

Speaking in the Dáil last week, the Minister agreed that the current regime is “less than ideal.” But he added that the system is continually improving.

In response to a growing chorus of criticism, both the Minister and the Taoiseach Leo Varadkar have insisted that the Direct Provision system is not mandatory, pointing out that refugees can choose to live with friends and family instead.

Most asylum seekers, however, don't have family or friends in Ireland. They also experience insurmountable difficulties trying to secure accommodation and employment. Against that background, they are often left with little choice but to enter the country’s Direct Provision system.

The Department of Justice has yet to respond to an enquiry from Hot Press, asking for the number of substandard and makeshift refugee accommodations across the State. Last week, the Taoiseach conceded that Direct Provision centres are ‘often substandard’.

• Picture shows a resident from the Cahersiveen Direct Provision centre protesting against racism...