While the Ombudsman must follow the Government’s coronavirus protocols for now, a visit to the controversial Skellig Star Hotel in Cahersiveen will aim to assess the truth about what happened in what has become Ireland’s most infamous direct provision centre.

The Office of the Ombudsman has said that it is hoping to visit the controversial Skellig Star Direct Provision Centre, in the Co Kerry town of Cahersiveen, at the earliest possible opportunity. The visit is likely to take place in the autumn.

Speaking to Hot Press, a spokesperson for the Office of the Ombudsman said that visiting Skellig Star, to examine the grievances of residents there, would be on the top of the impartial body’s priority list. Inevitably, the visit will depend on whether or not there is a resurgence in coronavirus infections in the coming months.

“Skellig Star would be one of the first centres that we are going to visit once all Government restrictions are lifted,” the spokesperson said. “We are following Government guidelines in relation to Covid-19 at the moment, so we don’t have a date yet – but we are hoping to visit in Autumn.”

The Ombudsman’s office is an independent and impartial body, whose role is to “investigate individual complaints about public services such as those provided by the Government, local authorities and the HSE.”

OUTREACH PROGRAMME
The spokesperson stressed that “the Ombudsman does not have an inspection role in relation to Direct Provision.” He added, however, that “the Ombudsman has carried out an extensive programme of Outreach visits to direct provision accommodation centres to inform residents of the services we provide, and to take complaints from residents and their representatives.”

The programme has been suspended since mid-March, as part of national efforts to contain the coronavirus outbreak.

“Residents and their representatives,” Hot Press was told, “can still make complaints to the Ombudsman online, in writing and by telephone, and we continue to respond to all complaints.”
The spokesperson emphasised that the Ombudsman is calling for “an end to the Direct Provision.” The office welcomes the commitment in the Programme for Government, agreed by Fianna Fáil, Fine Gael and the Green Party, to end the system.

Earlier this year, in April, Ombudsman Peter Tyndal (pictured) had said that the current system for accommodating asylum seekers was “unsustainable and unsuitable.”

The need to visit Skellig Star Hotel became clear for the Ombudsman’s Office when Sean Garvey, a Senior Investigator there, concluded that there are considerable differences between residents’ complaints and the counter-claims made by the International Protection Accommodation Services (IPAS – a branch of the Department of Justice. 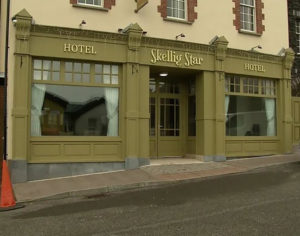 In a letter sent to residents in May, which Hot Press has seen, Sean Garvey wrote that IPAS’s response seems reasonable, ‘on first reading’.

“But you will see from it,” Sean Garvey continued, addressing the residents who have complained, “that the IPAS position on the points you raise is very different from yours. In situations such as this, where we have two very different positions on the same points, we find the best way for us to examine complaints is to visit the centre in question, so we can see the situation for ourselves.”

Sean Garvey had promised that an investigator would visit the centre once 'the crisis has passed' so that 'we can form our own views' on the matter.

Hot Press understands that an inspector from the Department of Justice recently visited Skellig Star Hotel. Residents have told us that local Sinn Féin TD Pa Daly is also slated to visit the centre this Friday.

At the time of writing, about 60 residents remain at the now infamous hotel, and its closure is still their primary demand. Hot Press understands that IPAS has, this week, green-lighted the transfer of another family from Skellig Star.

One single parent, however, told us that his application for transfer was rejected.

"They told me they don't have suitable accommodation for me currently," the resident said.
Green Party TD Joe O’Brien has also promised residents that he will press the new Minister for Equality and Integration, fellow party member, Roderic O’Gorman, to close down the centre. Minister O'Gorman began his tenure battling an array of online harassment and homophobic vitriol on Twitter.

A number of the complaints to the Ombudsman office made by residents in the Cahersiveen Direct Provision Centre relate to the hard lockdown of Skellig Star, ordered by the HSE, with the aim of containing the persistent coronavirus outbreak there.

The unorthodox lockdown banned residents from leaving the centre for a month. The confinement, they argue, may have left lasting damage on the mental health of the residents –especially child residents at the centre.

Meanwhile, IPAS has defended the measure to the office of Ombudsman arguing that residents had access to exercise facilities inside the centre, and that ‘arrangements [were] in place’ whereby any specific items residents needed could be ordered from a local shop.

This week, Australian officials also came under fire for ordering a five-day hard lockdown of nine public housing towers in Melbourne, to combat the spread of coronavirus.

The Melbourne social housing estates were home to the city’s most vulnerable and impoverished groups, including immigrants and those grappling with mental health difficulties.

• To make a complaint to the Ombudsman office, visit https://www.ombudsman.ie/making-a-complaint/make-a-complaint/.