Sparking fan frenzies online tweeting the likes of Harry Styles and Shawn Mendes, apologising for comments made on misogyny in hip-hop, or candidly discussing a heroin addiction following a stint at a rehab clinic in Barbados, it’s a peculiar time for The 1975’s frontman Matt Healy - six years into his stardom.

A Brief Inquiry Into Online Relationships is the album detailing Healy’s struggle with addiction. It’s a deeply personal album, yet through its paining expression it becomes a wide-ranging one. Healy touches on just about everything you would expect from an album heralded as the millennial Ok Computer; our relationship with technology, modern politics and various other heavy issues.

Take state-of-the-planet address ‘Love It If We Made It’ - a highlight from Thursday night. Healy belts out contentious lyrics about horrendous tragedies that have become normalised in recent times such as the drowning of a three year old Syrian refugee, he sings: “a beach of drowning three-year olds,” and directly quotes Donald Trump: “I moved on her like a bitch!”

The stage resembles a large tv screen. The fourth wall is removed, leaving the band literally speaking to its audience through a television. In a similar way U2’s staging for the Popmart tour elucidated it's accompanying album, the stage here is the perfect vessel for A Brief Inquiry. Among its many tricks; a conveyer belt and a litany of moving rectangles and boxes.

During ‘The Ballad of Me and My Brain’, the screens go static, Healy meanders his way around the back of the stage and touches the screen until it flashes into colour. The projections shift to show he is standing inside an iPhone with the iconic apple font spelling out “hello” over his head. It leaves the audience taking photos of Healy, with their iPhones, as he stands inside a giant iPhone.

For 'Sincerity is Scary', Healy re-enacts the song’s charming music video utilising the treadmill that runs the width of the stage.

‘I Always Wanna Die (Sometimes)’, is the Oasis-like closing track: “Your memories are sceneries for things you said but never really meant. You win, you lose, you sing the blues, there's no point in buying concrete shoes, I refuse." The song is as musically dense as it is lyrically sharp.

‘Loving Someone’ sees a giant rainbow flag projected on screen. Before kicking off the tour, Healy quipped on Twitter: "Loving Someone live with this new show is gonna be the ultimate wig snatch for me and the gay fuck witches." He didn't lie.

Older favourites ‘The Sound’ and ‘Chocolate’ receive a rousing reaction from the crowd as the band closed out the night. They'll be back shortly: “We’ve got another new album coming out so we are probably going to come strolling back to Dublin” 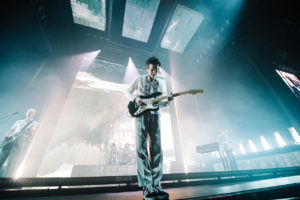 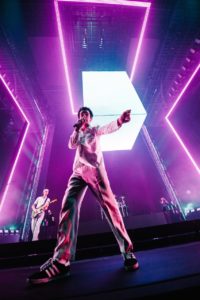 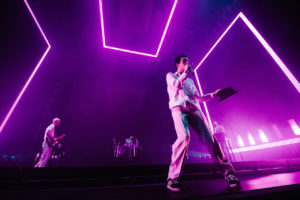 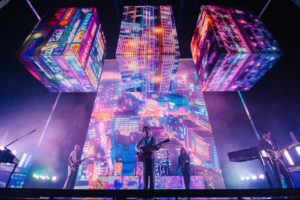 Live Review: ZZ Top give all their loving at the 3Arena
Live Report: Lewis Capaldi packs humour into hit-filled 3Arena performance
Live Report: The 1975 deliver exhilarating dual show at Dublin's 3Arena
Hot for 2023 Irish Acts: TraviS & Elzzz
ETBI: "There's a real pride in Further Education and Training, as the journey of choice, and the primary choice, for many learners"
Ballyfermot College of Further Education: The Home Of Incredible Creative Talent