To mark the 100th anniversary of the publication of James Joyce's Ulysses, we're revisiting some of our favourite quotes about the iconic book, taken from a variety of interviews in the Hot Press Archives...

"When I was young, books had the taste of forbidden fruit about them. Reading for pleasure was not approved of. And that world has all disappeared. Joyce, oddly enough, was never banned in Ireland. I bought my first copy of Ulysses in Brown & Nolan’s, it was under the counter. It was also put in a brown paper bag before it was given to me, it had that unmistakable green hardback cover, and the reason it wasn’t on the shelf was that the main customers would be priests from the posh colleges and they would find it offensive and they gave most of the trade to the book shops."

Reflecting on ‘Sandycove’, the song he wrote in the shadow of the Martello Tower which is the setting for the opening section of Ulysses.

“That day was a real odyssey for me. I went to all the pubs Joyce used to drink in and to Joyce’s tower and I even ended up starting that song in a James Joyce notebook a friend had given me the day before!"

“You think Ulysses is difficult? Try reading it in Portuguese, the translations are crazy!”

“I’ve always had a bit of a thing for Ireland, which I put down to being a massive fan of early Van Morrison and reading Ulysses five times!”

“I’m sure there’s a tourism aspect to it being sustained as well, but you do get a sense of Dubliners being genuinely proud that this is the place which inspired Joyce.

“I’ve got a copy [of Ulysses] at home but, well, it never seems the right day to start it. That ‘I buy books I never read’ line from ‘Our Velocity’ is true – I’ve shelves of stuff that I’m saving up for when I have a really bad accident and am trapped in my room for a year. There’s great comfort in having things around you that you’ve chosen yourself and have an interest in.”

"I did the audio book of Ulysses having zero idea of what I was letting myself in for. Jesus, it was mad. I thought it would be a good idea to do it in a day because essentially it's just the one long unpunctuated sentence... but it really wasn't! It went on forever and because I hadn't been breathing properly I took a quick break, went to Tesco and fainted trying to buy a Red Bull."

"No and no! I ended up having to read it twice because you couldn't wing it. I was doing it at the same time as a play, so I was prepping it in between my scenes and then doing a full day's reading before the next performance. An interesting experience but one never to be repeated!"

“I always bring people to Sweny’s Pharmacy, the Joycean chemist shop, near the corner of Merrion Square. In Ulysses, when Bloom buys lemon soap for Molly, it’s in Sweny's. A group of real Joyce fans took that space over. They do Finnegan’s Wake reading groups and lunches – it takes them about eight months to a year to get through the book. It's tiny, but it's a place for real fans: it's not just a tourist product.”

“I was imbued with the New Testament and Bible class and Sunday school. I got out of that when I discovered French literature, and then when I went to Trinity, that really saved me. And then there was the difficulty of not being able to get hold of Ulysses, the censorship, the sinister John McQuaid and all the ghastly business with Protestants and Catholics. It was a woeful island in those days.”

I tried to read Ulysses. (laughs) I tried, like many others before me! But I’m afraid I didn’t get very far… Maybe I’ll have the time to try again, but I’m afraid it’s over my head a bit!”

“Well, let’s put it this way, I finished it in my own way. I don’t think I read every single word but I read most of them! It’s an amazing thing but I’m glad I don’t have to teach a class on it.”

Has she had a read of his love letters to Nora Barnacle? Hilarious and filthy in equal measure – ‘graphic’ doesn’t even begin to cover it – they’re worth a Google.

“I have. I actually have the book! They’re wonderful. I feel like his is a pretty beautiful template for living in general. I’m a little bit disgusting, so I can relate. Would we have hit it off had our lives intersected? Most definitely!” 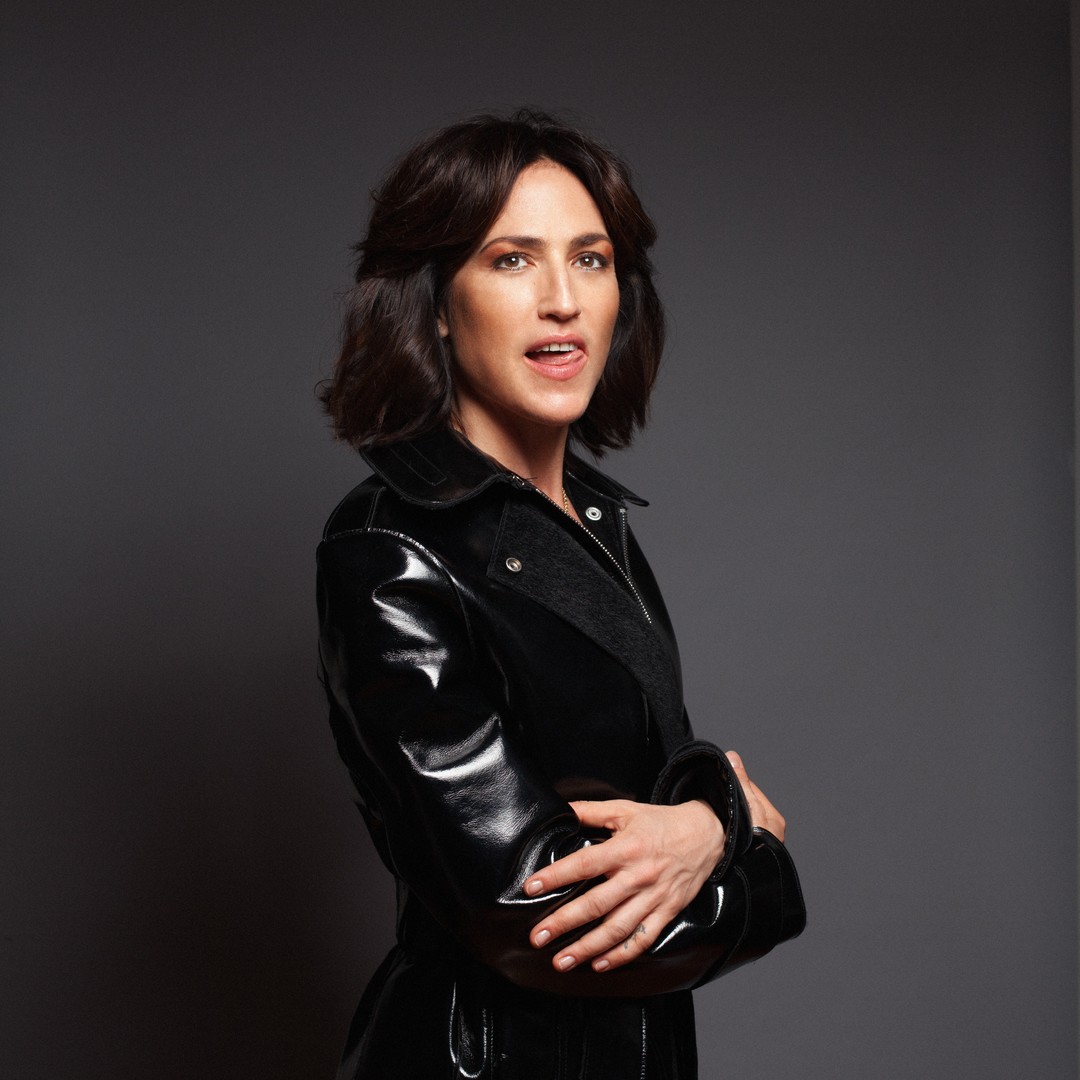 “Back in the twenties and thirties, Irish writing really was dominated by a couple of key worldwide figures who were like Easter Island statues dominating the landscape so sternly. Imagine trying to write a novel in the years after Joyce’s Ulysses? You’d just want to fucking cut your throat!”

On the play Thesis – which tells the tale of one day in the life of a student trying to get his Joyce thesis published.

“There is still that kind of snobbery in the sense of people who think it’s just not right to be adapting or utilising Joyce as we do in this play. There is still that reverence towards his work and that it should remain untouchable. But I’d encourage the purists to see it to make their minds up. Our point is that Joyce should be available to everybody, and if anybody is encouraged to read Ulysses after seeing this play, then that’s a job well done on our behalf. And I really would like more people, in general, to give theatre a chance.”

"I couldn’t predict what kind of reaction she’d get. It’s great that she’s sensual, but professionally that can be unfortunate when you’re taking a role on. I mean, Molly can be interpreted as being a free-spirited, freethinking modern woman, or you might find her just too full on. So it really pleased me that so many women responded positively and came up to me after the film was screened. I was glad they identified with her. And I was just happy people didn’t think she was threatening or perverted.”

On Ulysses being greeted with the same establishment disdain in 1922 as Never Mind The Bollocks was some 55 years later.

"There’s a lot of reverential treatment and establishment approved abound for something that was the punk of its day – banned and not very rewarding financially and almost impossible to publish. No one else could have done it of course, but it’s not precious, it’s Dublin street talk and street life through a double genius filter and then a further white wine filter over a twenty year period or something like that. I should read it..."

On his tattoo of a Joyce quote: 'She was walking on before him, her hands holding her skirts up from the slush'

“Do you know where it used to be? There was a James Joyce centre on the quays and it had a bit of scaffolding outside it. And this line was written on the scaffolding. And every time I drove out of Dublin I saw it. And I loved slowing down to read it because it struck me as a beautiful sentence. And I wanted to get a tattoo. And I was born on Bloomsday [June 16], so I went into the tattoo parlour. And the guy was more used to doing spiders and stuff, and I gave him the quote and said, ‘Write that on me’. Ha, ha! It’s not the kind of tattoo that would instil fear in your opponent over a game of pool down in Sally Longs!”

What do you make of all the Joyce revisionism currently going on? Roddy Doyle describing Ulysses as unreadable and in need of a good editor…

“I really don’t know much about anything when it comes to that sort of stuff. I liked the sentence and I liked the film Nora. And I started Ulysses a few times. The fact that I was born on Bloomsday as well I suppose adds to it – though perhaps more importantly, it’s also Stan Laurel’s birthday. Who isn’t mentioned that often in Ulysses – though he perhaps ought to be. Ha, ha!” 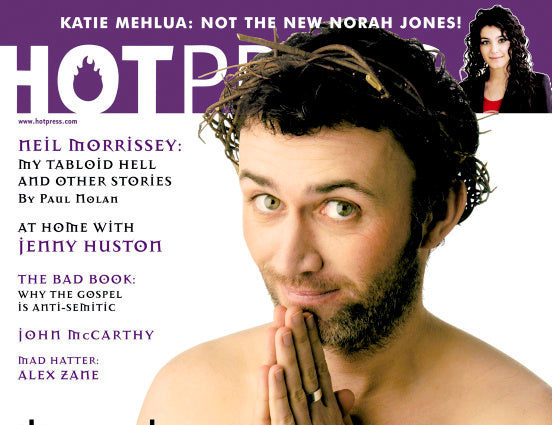 "Ulysses gave the Catholic Church the finger and let the world know that Irish women fucked and liked it."

"Even Joyce’s Ulysses is based in fact. Every single fact in that book is contained in a newspaper of the 16th June, 1904. If Leopold Bloom goes down the quays and sees a certain ship, if you look it up in the newspaper you’ll see that ship is listed as being in. So he recognised that you had to at least start out of fact. Fact was so startling to the 20th century mind and so like a diamond glowing with truth that you couldn’t tamper with it. You had to take it and then you hung your imaginative insight into society and into life and truth on that rack of fact. But you had to work within that limitation. And therefore your reader could say 'Jesus, that’s extraordinary, I don’t believe that,' and you could say, 'but it did happen!'"

“Strick treated us appallingly. He paid us buttons and I always felt he was just exploiting Joyce... It was a dreadful experience, all told. The worst thing about the man is that he was totally humourless and that is fatal when it comes to interpreting Joyce, because Joyce is wickedly funny.”

So, who among contemporary Irish directors, does T. P. McKenna believe would make a great interpreter of Joyce’s work?

“Somebody like Jim Sheridan or Neil Jordan. Though I think Jim is probably nearer to the spirit of Joyce than Jordan is. But you have to be Irish to properly interpret Joyce, because Joyce is the most Irish, Irish writer of all time. And I think Jim would capture that, because he is the quintessential Dubliner.”

"In the main section of Ulysses, James Joyce is saying, I’m me own fucking father. And that’s what we have to do, as a race. Because, until now, we didn’t have role models that we respected because they didn’t take on what we thought they should take on, to liberate us from Britain and Rome." 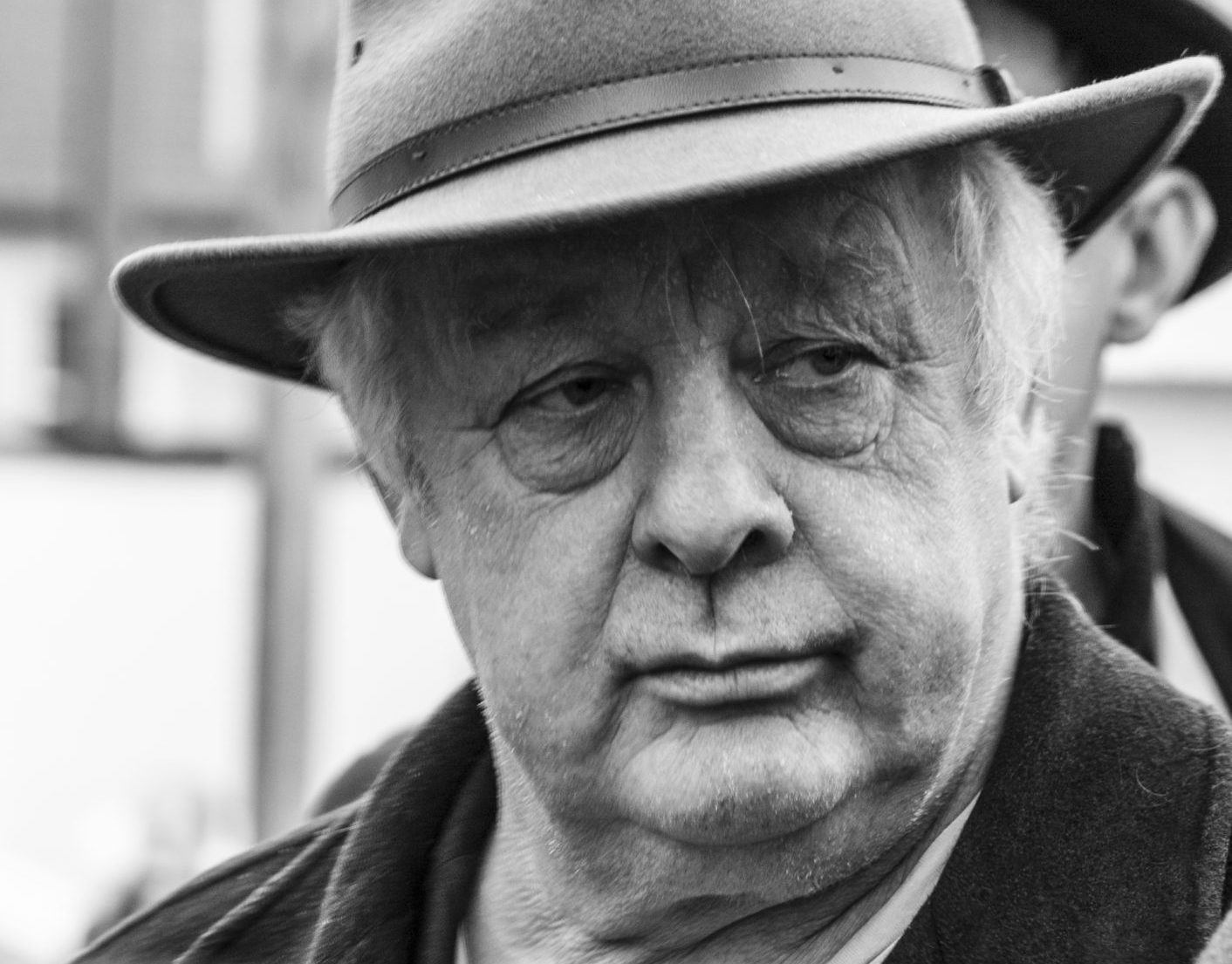 Happy Birthday Sinead O'Connor: Revisiting a Classic Interview
Crisis in the Horn of Africa: Revisiting Michael D. Higgins' account of his 1992 trip to Somalia and Kenya
On this day in 1971: Joni Mitchell released her iconic album Blue