It was a night for Dublin’s rock ’n’ roll hordes to welcome home Fontaines D.C. from their globe-trotting, chart-slaying achievements throughout 2019. But the band didn’t stand on ceremony, inspiring scenes of marvellous mayhem instead at a heaving Vicar Street.

Behind the scenes, Fontaines D.C. are getting ready to make their move. In the throb of Vicar Street, the sense of expectation is reaching breaking point. Can they pull it off?

Home town shows can be flat, fraught affairs. The artist tries too hard to demonstrate how much it means to be back where it all began; the audience fails to notice it has crossed the line between supportive and obsequious.

There is none of that tonight. Wisely, Fontaines D.C. crack on with the first of two nights at Vicar Street, getting stuck in as if it was just another gig.

They’ve had a year and then some. A little over 12 months ago, the five-piece supported Shame down the road at the now demolished Tivoli. Since then, amid acclaim from virtually every quarter, Fontaines D.C. have become the name to drop in forward-facing post-punk. In a contrary arc, the gentrification that claimed the Tivoli has ploughed ever onwards.

So it’s the perfect moment to catch a group poised on the brink of something larger. They play 5,000-capacity Brixton Academy next year; movie star Cillian Murphy has come along to see them tonight. And of course the sense of Dublin as a city alienated from itself, which they capture so viscerally on their Mercury-nominated debut, Dogrel, has, if anything, intensified in the interim. 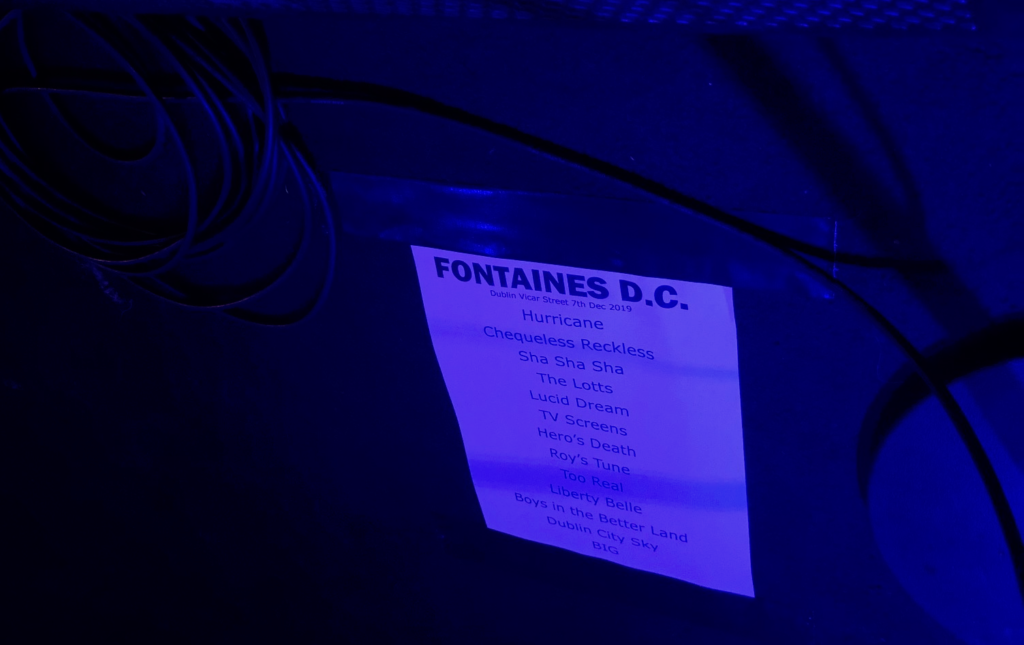 This is a proper squall from the outset. ‘Hurricane Laughter’ juxtaposes twitchy frontman Grian Chatten, half-chanting in his Skerries accent, with the collapsing pile-driver guitars of Carlos O’Connell and Conor Curley. It builds from there, with ‘Chequeless Reckless’ applying an industrialised din to Chatten’s recollections of the despair he felt in his pre-rock star days, working a minimum wage job at a posh hotel.

Plastic pint glasses fly through the air from early on. They include two new songs, 'Lucid Dream' and 'Hero's Death', from the follow-up to Dogrel thats's already in the can and promised for next year. Soon the mosh pit stretches all the way to the back of the room. And that’s before the quintet of Grian Catten, Carlos O'Connell, Conor Curley, Conor Deegan III and Tom Coll, even get around to their triple whammy of ‘Too Real’, ‘Boys in the Better Land’ – a sardonic look at contradictory Irish attitudes towards the UK which corners of the British media have gleefully seized on as proof of our rampant Anglophobia – and ‘Big’.

There isn’t much chatter. That is as you would wish. The band are doers rather than sayers. Chatten does, however, have a lump in his throat as he dedicates ‘Roy’s Tune’ to Philip Dunne, a young man from Skerries who passed away several days previously.

“Philly would have sang it better,” he whispers at the end. Thereafter, the volume cranks up again, punters are splashing beer once more. And Fontaines D.C. remind us why they are indeed the dogrel’s bollocks.