Eimear Ryan: "I started thinking about the death of an artist – and how complicated and multi-layered that is..."
Lucy O'Toole

As she releases her highly anticipated new novel, Holding Her Breath, Eimear Ryan reflects on mental health, sport, and why Irish women are dominating the literary world.

As a captivating voice in Irish literature, a co-founder of Banshee Press, and a dedicated camogie player with St. Finbarr’s in Cork, Eimear Ryan is a unique force – defying easy categorisation, and challenging preconceived notions and tropes both on and off the page.

The Co. Tipperary native, now based in Cork City, made headlines late last year, as Sandycove, the Dublin-based imprint of Penguin Random House, announced the acquisition of her novel, Holding Her Breath. It’s a gripping, yet tender, read –  telling the coming-of-age story of Beth Crowe, a first year Psychology student in a Dublin university, whose life is shaped by the suicide of her grandfather, a famous poet, decades before.

“This book has been with me for so long,” Ryan reveals. “I started writing it in late 2013, and it’s gone through so many different iterations. I’m just really happy that other people get to read it now.”

Despite having died in the ‘80s, Beth’s grandfather, Benjamin Crowe, is an omnipresent force in Holding Her Breath – with his legacy serving as the catalyst for the novel’s entire sequence of events. As well as crediting Scottish poet Don Paterson as an influence behind Benjamin’s poetry, Ryan reveals that plenty of other figures also went into the fictional poet.

“Sylvia Plath and Ted Hughes is an obvious one,” she says. “There’s a lot of Heaney in there, and there’s a dash of Kurt Cobain, in some ways. And when I was starting to write the book, one of my favourite actors, Philip Seymour Hoffman, died. I started thinking about the death of an artist – and how complicated and multi-layered that is. It ripples out to so many different groups of people. You’ve got the fans who are mourning the loss of the art. Then you’ve got the wider art world, who mourn the figure himself. And then you’ve got the family – and their grief is on another level altogether.

“I started thinking about how it would impact on future generations. Even his granddaughter, who never knew him, but is still impacted by his life and death.”

The novel contains another clear nod to Cobain, with a reference to a ‘90s rock star who signed off his own suicide note with lines from a Benjamin Crowe poem, before picking up the gun – resulting in a bump in royalties for Beth’s family, as the poem experienced a morbid surge in popularity as a result.

“In my head I was like, ‘God, it’s usually only female artists that we do this to’ – romanticising their deaths, and particularly deaths by suicide,” Ryan reflects. “I was thinking of the likes of Hemingway. Nobody remembers the manner of his death. When we think of him, it’s more about his life and his work.

“But then I was thinking about Kurt Cobain, and how we have really romanticised his death, in a way that’s highly problematic. So there are male figures we do that to as well – it’s not just the Plaths and the Woolfs.”

Although Benjamin looms over much of the book, it’s ultimately a story celebrating women as forces of strength, support and resilience. Beth’s friendship with her roommate Sadie is particularly powerful, as the two girls set off on their journey together as young adults, at a university based largely on Trinity College Dublin.

“When I started writing the book, it was the year after I’d done a Creative Writing Masters in Trinity – so I was kind of high on the setting,” Ryan explains. “I really loved my year there, and wanted to write about it. But even at that stage, I knew it was already very well-worn territory, going back to The Ginger Man by J.P. Donleavy. All Names Have Been Changed by Claire Kilroy is a brilliant novel also set in Trinity, and The First Verse by Barry McCrea is another one that was really influential for me.

“In recent years then, there’s just been more and more brilliant iterations of Trinity in fiction,” she continues. “It’s that classic set-up, and one of the seven basic plots – voyage and return. The young person leaves behind their family, strikes out on their own, learns some things, and then comes back. That idea of being young, and able to move away from the influence of your parents and your homeplace to figure out who you are, is always going to be a compelling thing that a lot of people can identify with.”

The connection to Trinity also places Ryan among a movement of acclaimed millennial alumnae of the college, who have been dominating Irish literature over the last few years.

“There’s a really strong wave of young Irish female writers coming together,” she nods. “It’s really nice to be spoken of in the same breath as authors that I really admire – like Niamh Campbell, Megan Nolan, Sally Rooney and Naoise Dolan. I love all those authors’ work. And it’s nice that there is this moment, for stories about young Irish women. In past generations, people who wrote about young women and coming-of-age stories would’ve been on the back foot a little bit. They would’ve been accused of not being literary, and would have had to defend why these stories matter. That’s not something we have to do now – stories about young Irish women are culturally relevant now. Long may it continue!”

What does she think sparked that change in attitude?

“It was an accumulation of a lot of things,” she considers. “From #WakingTheFeminists, to the introduction of Tramp Press. And there was Sinéad Gleeson’s brilliant anthologies of Irish women writers, which promoted new writers, but also unearthed writers who had not been anthologised, or written about, in the same way that their male peers were. Myself, Claire Hennessy and Laura Cassidy set up Banshee Press around the same time, and we were able to be part of that wave, which was great. But I definitely think that Sally Rooney coming along, and having the popular appeal but also the critical acclaim, was a big boost to it.

“And the fact that the Kardashians were tweeting about Normal People...” she laughs. “I mean, that’s a cultural reach that is almost unheard of!”

“I wanted to make the point that Beth is taking steps to get better,” Ryan points out. “She’s taking this seriously, and she’s not suffering on her own. Hopefully it’s increasingly normalised – for young people especially. It would be great to think that we could get to a point where it’s just seen as your dental check-up, or your doctor check-up. Just checking in, and making sure everything’s fine.”

There’s an interesting parallel in the novel between the attitudes towards mental health during Benjamin’s lifetime, and present-day attitudes – with the implication that things haven’t changed as much as they should have.

“I want to be positive, and think that we have come a long way – but we really haven’t,” Ryan admits. “It’s still so difficult for people to vocalise that they need help, or are struggling – and then for that to be received in a way that’s useful. If you vocalise that you’re struggling, a lot of people’s first instinct is that they want to give you a pep-talk. People just want to rescue you straight away with their words – and that doesn’t cut it.

“It’s still really difficult for people to access help as well,” she continues. “Universities are better equipped than some places, because they probably will have a therapist or a counsellor on staff. I know from working in UCC, we had access to a counsellor as staff. And I definitely used that, which was brilliant – I wouldn’t have known how to find a therapist otherwise. Having those access points is so helpful.”

As an active camogie player herself (“I’m one of the oldest on the squad now – I’m 34!” she laughs. “There’s a lot of really fast young ones who run rings around me in training.”), Ryan also offers a unique perspective into the impact high-level sport can have on young people’s mental health. It’s explored in the novel through Beth’s involvement with competitive swimming.

“I wanted to write about sporting failure – because you never really hear those narratives,” she muses. “If there’s a narrative of sporting failure, it’s only in the run-up to how the athlete turned it all around, and ultimately triumphed. You never hear the story of the failure – and then they just stop!

“Over the course of my playing career, I’ve definitely had those moments where I’m really struggling, and just not performing,” she continues. “Sport is ultimately supposed to be about fun and enjoyment and play – it’s literally ‘played’. But if you’re doing it, and it’s just making you sad and miserable, you feel like you’re doing everything all wrong. It can really impact young players – who have a lot of pressure and expectations on them, but maybe don’t have the mental maturity to handle that. I definitely didn’t at that stage. It can become really problematic.”

Elsewhere in the novel, she emphasises the point that monogamy isn’t the answer for everyone.

“Maybe it’s because we’re in a Catholic country, but when people talk about a ‘failed marriage’, I just think it’s so wrong,” she reflects. “A marriage that ends obviously worked for a long time – otherwise they wouldn’t have stayed in it for that long. And that idea that there’s one person out there for you is absolutely untrue. You can have several great loves of your life, and maybe some of those will overlap! Obviously there are choices – you can choose not to pursue that person who comes along, or you can choose to pursue them. It was really fun to explore all those thorny issues and overlapping loves.”

However, the next book she’s working on is, by her own admission, “totally different.”

“It’s a book of sporting essays,” she reveals. “It’s a loose memoir, about growing up as a woman in the GAA. In the novel, I got to explore a lot of my sporting feelings, but through a fictional character, and through the medium of this other sport – and I’m actually a very bad swimmer! So now to be exploring something much more personal to me, and be revisiting old memories, is really interesting.”

• Holding Her Breath is out now. 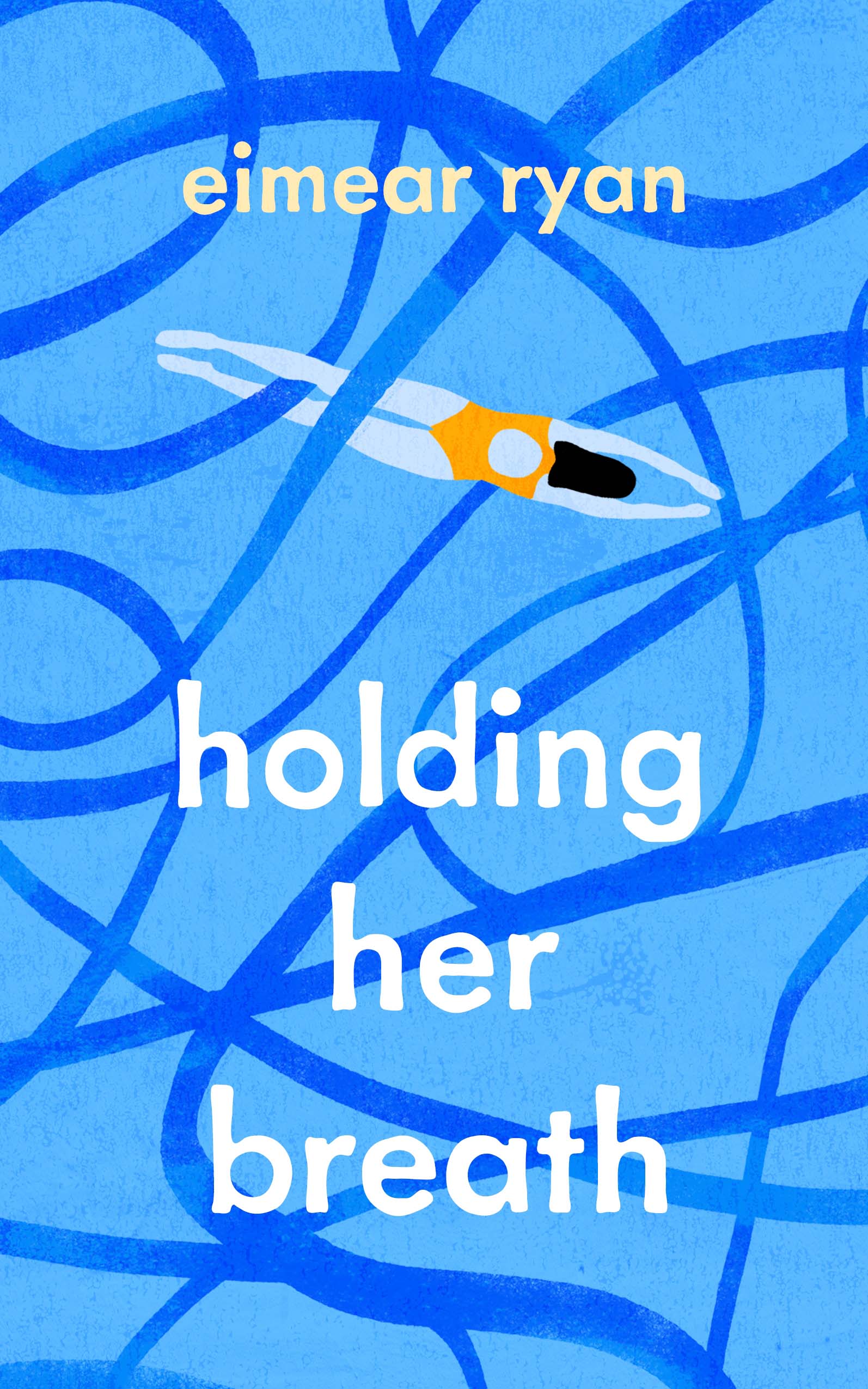