Cahersiveen Residents Write To TDs To Say Thanks
Shamim Malekmian

The asylum seekers caught in the controversial direct provision centre in the Co. Kerry town of Cahersiveen were impressed by the level of concern shown by opposition TDs in the Dáil yesterday.

Residents living in a coronavirus-stricken Direct Provision Centre in Cahersiveen, Co Kerry, have written specially to TDs who stood up for them in the Dáil yesterday.

The letter, a copy of which has been sent to Hot Press, thanks the deputies for revealing, to the nation, the scope of what the asylum seekers have described as “discrimination against us by the system and this present administration.”

“Words are not enough to thank you for the unfading support you showed us yesterday at the Dáil,” the letter says.

The residents at Skellig Star Hotel also say in the letter that children at the centre have not received any toys.

“It’s not true that our children have been provided material to keep them busy,” the letter says by way of refutation. 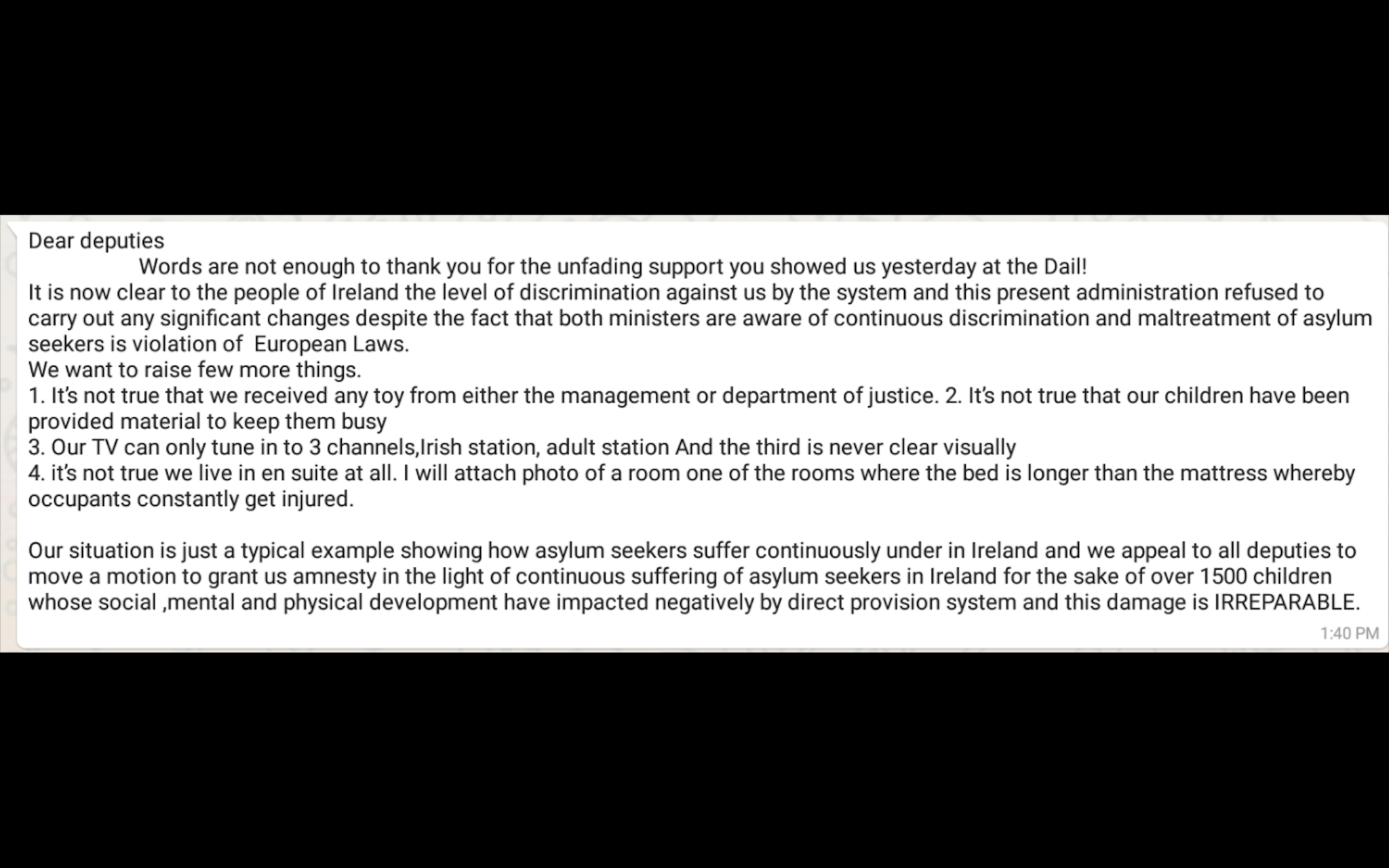 The letter also explains that residents can only access three television channels in their rooms, one of which is not suitable for children under the age of 12.

“Our TVs can only tune in to 3 channels, Irish station, adult station. And the third is never clear visually,” they say.

Equally, they cannot gather in a communal TV area because of social distancing requirements.

The difficulties being faced by children during the Covid-19 crisis were discussed in the Dáil yesterday. Fianna Fáil TD for Dublin Bay South, Jim O'Callaghan, expressed concerns to the Minister about what he described as "intergenerational inequality" during the lockdown.

He cited findings of a report by the Health Information and Quality Authority (HIQA), which he said emphasises that children "are not substantially contributing to the spread of the virus."

“We must reinstate greater normality into their lives,” he said. “ I note what the Minister said in respect of Direct Provision, but I suppose there are many children in Direct Provision and the difficulties they are going through and the absence of being able to socialise with their friends or go to school pretty much accentuates the issue of equality.”

The latest figures show that there are 1,672 children (813 girls and 859 boys) living in Direct Provision centres across the country. Of these, about 85 per cent are aged 12 and younger, while over 600 children are between 0-4.

A special Oíreachtas Committee for Justice and Equality recently reported that children growing up in Direct Provision miss their only chance “of having a normal childhood.”

Stigma and issues around bullying also often prompt refugee children to lie about their place of residence to their classmates at school.

The letter from the Cahersiveen residents urges the deputies to be the voice of over 1,500 refugee children in Ireland. The “mental, social and physical” damage of growing up in Direct Provision can prove irreparable, the residents say.

In the Dáil, the Minister for Justice emphasised that the gates in the Skellig Star Hotel are unlocked. Yet no one dares to move past them.

There have been promises of building a 'recreational centre' in the hotel.

“It won't help us avoid the virus,” one resident told Hot Press. “The only good thing that all residents expect now is transfer out of this place. Here, smiles have disappeared from the faces of residents. Depression, fear and insomnia – they are the order of the day.”

While residents remain confined inside Skellig Star Hotel, Cahersiveen locals often try to aid them by accessing items from the shops.

Numerous Cahersiveen locals have contacted Hot Press, to express support for the residents in the direct provision centre.

“They are not asking for much,” one resident told us. “On the shopping list the female residents sent me, it’s things like panty liners and Tampax. Some of them come from very different cultures – they can’t tell male security guards that they need intimate feminine products or ask them to buy them on their behalf.”

Update: Within a couple of hours of having posted this story, the residents in the Skellig Star Hotel in Cahersiveen received a package of toys and a tablet to help keep the kids – and maybe even the adults - occupied. It was accompanied by this note: