Unique recording of Bob Dylan's 'Blowin' in the Wind' will be sold for an estimated £600,000
Yasmin Kelly

Christie's London will auction the one-of-a-kind recording on July 7.

A new recording of Bob Dylan’s ‘Blowin' in the Wind’ will be sold at Christie’s in London on July 7, with an estimated value of 600,000-1 million pounds

Produced by T Bone Burnett and manufactured as a one-of-a-kind disc in a unique format, it has been described as Dylan’s first studio recording of what is possibly one of his most famous songs since his first album Bob Dylan in 1962.

In the acetate-like Ionic Recording format, the singular disc comes autographed by both Dylan and Burnett and comes in a wooden case, marked with “one-of-one.” 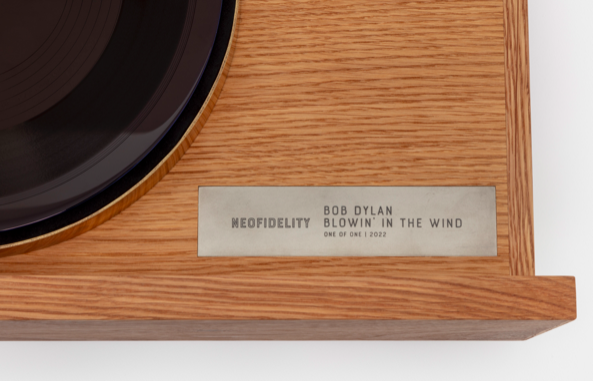 In late April, Burnett announced that he had gone into the studio with Dylan and re-recorded some of his classic material for his new company, NeoFidelity Inc, and its Ionic Originals format, which he described as a new development in analog technology.

Pete Klarnet, Christie’s senior specialist in Americana, books, and manuscripts said: “Christie’s is excited to be offering this unique recording of Bob Dylan’s ‘Blowin’ in the Wind,’ one of the most important songs written in the last century. I very much share T Bone Burnett’s passion for the sonic excellence of analog sound and it is fitting that this important development is being offered as a stand-out lot in The Exceptional Sale, London on July 7, 2022.”

In response, Burnett highlighted the importance of the iconic track, explaining that it is “both deeply relevant for our times and resonant with decades of the artist’s life and experience. We’re grateful to Christie’s for presenting Bob’s masterful recording to the world in a unique and meaningful way.”

When or whether the rest of the general public will get to hear “Blowin'” or the full album Dylan has recorded with Burnett, in any format, has not yet been discussed as part of the auction announcement.

Revisit 'Blowin' in the Wind' below.